Grant Shapps is cutting short his family holiday in Spain and flying back to Britain where he will quarantine under emergency rules he himself enacted.

The Transport Secretary tonight said it was right he ‘get back to work in the UK as soon as possible’ to manage the fallout of the government’s decision to revoke the air corridor with Spain, which has seen a steady rise in coronavirus cases.

Hundreds of thousands of affected tourists are grappling with the sudden isolation imposition, with many fearing it will cost them their wages and even their jobs.

He added he would be leaving his wife and children and returning to the UK on Wednesday to best steer his department’s response, albeit from home.

Transport Secretary Grant Shapps will have to endure a two-week quarantine after returning from Spain, just days after securing an air corridor with the country 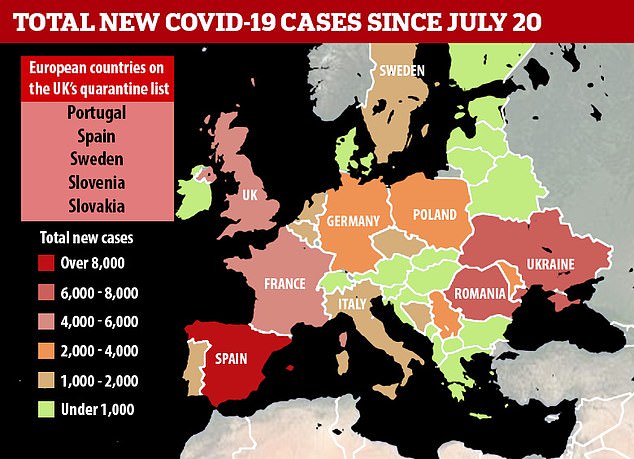 Spain was put on the UK’s quarantine list at just five hours notice – but cases are starting to rise in other European countries. France and Germany are the most at risk of another quarantine order, both popular holiday destinations for Britons

He said in a statement: ‘Thousands of people have seen their holidays disrupted or cancelled due to the necessary emergency imposition of quarantine restrictions in Spain.

‘I’ve been in constant contact with officials and industry representatives since I arrived in Spain on Saturday afternoon, when I reviewed the data and worked with colleagues to make the difficult decision to introduce quarantine.

‘However, I think it’s right to get back to work in the UK as soon as possible in order to help handle the situation.

‘The sooner I get back from Spain myself, the sooner I can get through quarantine. So I’m leaving my family to travel back to the UK on Wednesday.’

Mr Shapps is believed to have been aware of the likely re-imposition of quarantine before jetting off, but decided to press ahead anyway for fear of a backlash if he had managed to avoid isolation by acting on privileged information. 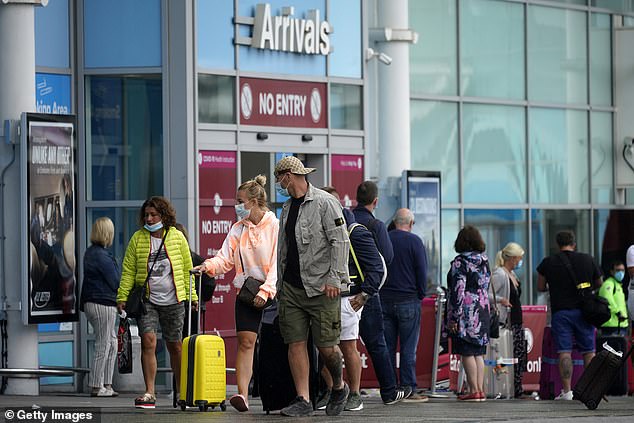 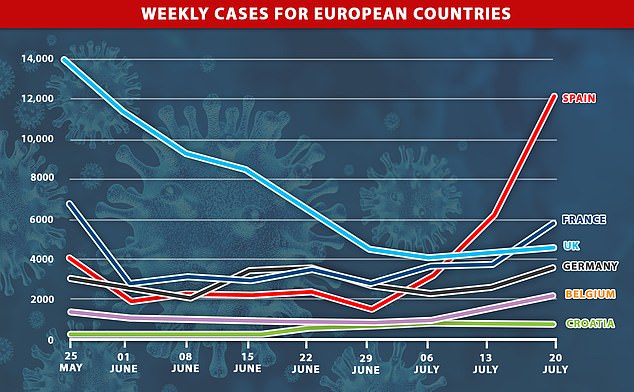 Downing Street confirmed today the Transport Secretary will not be allowed to bypass the quarantine period, insisting ministers are not exempt.

The Prime Minister’s official spokesperson said: ‘The same rules apply to ministers as they do anyone else.’

Tory MP Paul Scully, a business minister, is also holidaying in Lanzarote, which as part of the Canary Islands also comes under the quarantine rules.

Mr Shapps, who is the MP for Welwyn Hatfield in Hertfordshire, will be confronted with a brimming in-tray on his return.

Holidaymakers affected by the changes are crying out for support as they fear financial uncertainty.

Downing Street said British holidaymakers who miss out on work due to the newly-imposed quarantine period may be eligible for Universal Credit or employment support allowance of up to £74.35 a week, but not statutory sick pay.

However employers are under no obligation to pay staff while they are in quarantine, self-employed workers will be forced to give up jobs and some people could even face the sack if they have to isolate when returning home.

Meanwhile the beleaguered travel industry, especially airlines which have been burning through millions during lockdown, are facing yet more losses.

More European holidays could be thrown into disarray, with the Spain decision said to have spooked UK holidaymakers who had booked trips in France, Italy and Greece.