Children have been exposed to graphic anti-abortion material in an insensitive leaflet drop that has outraged parents.

The shocking junk mail was popped into the letterboxes of unsuspecting families in suburbs across Brisbane.

The black-and-white leaflet contained two drawings depicting the dismemberment of a foetus in the womb.

Children as young as three were reportedly exposed to the material, with some older kids going to their parents in a state of distress.

The offending leaflet, which was dropped into letterboxes across Brisbane and seen by kids, featured two graphic illustrations

Arana Hills mum Lauren Daniels said her young son found the leaflet in their letterbox last Friday and showed it to her six-year-old daughter.

‘I’ve never gotten anything so grotesque in the post as I have today,’ Mrs Daniels told the Courier Mail.

‘I don’t mind people having opinions about things. I was shocked to see something so graphic in my mailbox … it was enough to disturb my children.’

Nothing on the offensive leaflet suggests who was behind its creation and distribution.

The head of local anti-abortion group Cherish Life Queensland was quick to distance the organisation from the leaflet.

The group admits it has distributed leaflets in the area before, but denied it was behind the latest offensive drop. 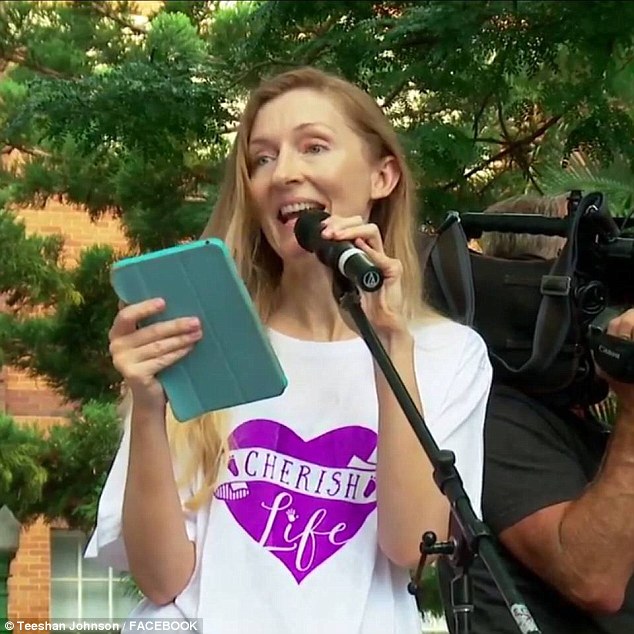 Cherish Life director Teeshan Johnson said it could have come from the pro-abortion lobby ‘trying to make trouble for us’.

‘We would never send out an aborted baby. That makes me feel sick,’ she said.

‘I feel horrified. I don’t know who that is.

‘We are very life-centric and we never send out distressing images.’

The leaflet referenced the Termination of Pregnancy Bill 2018, which is before the state’s Parliament.

Queensland Attorney-General and Justice Minister Yvette D’Ath said the Bill was based on the Queensland Law Reform Commission’s detailed review of current legislation, and repealed sections of the Criminal Code which made terminations a crime.

She told Parliament that Queensland’s current laws created uncertainty among doctors about their obligations and liability.