Grayson Perry’s The Life Of Julie Cope is a fun, free show

And on the Perry juggernaut rolls. It’s hard to remember a time the transvestite artist didn’t have an exhibition opening (or a TV show airing or a book being published).

He currently has two new shows: one at Liverpool’s Walker Gallery, displaying a selection of his dresses, another at Colchester’s Firstsite gallery, to complement A House For Essex, a building he designed in a nearby village in 2015.

The House is a tongue-in-cheek shrine to fictional Essex everywoman Julie Cope, who died after being hit by a curry delivery scooter. Complete with two bedrooms, it’s run as a £500-per-night holiday let – meaning, unfortunately, that few of the public ever see it. 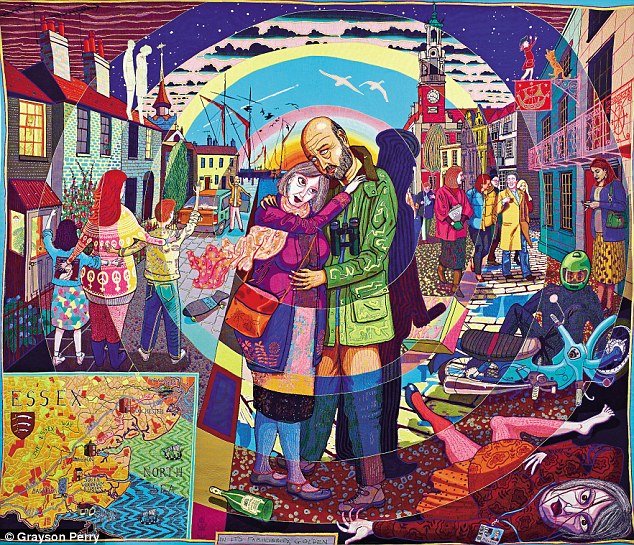 One of two new Grayson Perry shows is at Colchester’s Firstsite gallery, complementing A House For Essex, a building he designed nearby in 2015 (In Its Familiarity, Golden, above)

At Firstsite, to put that right somewhat, Perry is showing versions of the tapestries and woodcuts that hang inside the house, as well as sketchbooks with his initial designs for it.

There’s a logic to hosting this show in Colchester, as it was here that Julie both worked (as a social worker) and was fatally knocked down.

Perry is a gifted storyteller, with a Dickensian eye for detail; he packs more narrative into one of his tapestries than some authors manage in several chapters. 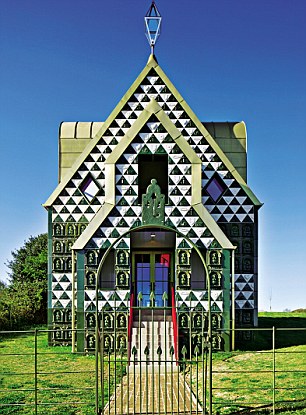 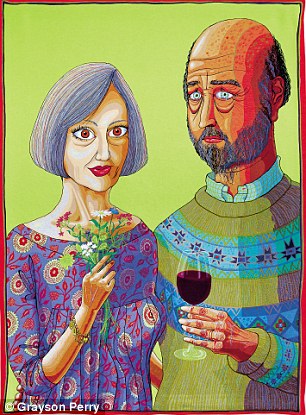 The House (above left) is a tongue-in-cheek shrine to fictional Essex everywoman Julie Cope; on display at Firstsite are versions of the works that hang inside (Julie And Rob, above right)

Take A Perfect Match, in which Julie – young and in love – receives a gorgeous bouquet of flowers from her husband, Dave.

All looks rosy, but a tiny accompanying note from him saying ‘I’m sorry’ (for a recent infidelity) anticipates the marital breakdown to come.

This a fun, free show, with Julie’s life story allowing Perry to explore one of his pet subjects: Britain’s class system. However, even at just two years old, this work already feels dated.

Perry is expert at examining the state of the nation – and given the mess we’re now in Brexit-wise, 2015 feels an eternity ago.

A Walk In The Woods: A Celebration Of Trees In British Art

A Walk In The Woods is a small exhibition in Bedford but it has paintings by some of the best-known artists in the world.

Included among the 40-odd watercolours, drawings and prints focusing on the role of trees and woodland in the British landscape – and taken from the town’s Cecil Higgins Art Gallery Collection – are works by John Constable, Lucian Freud, Edward Lear and Paul Nash.

The exhibition explores four themes: the pleasure of woods; magical and dreaming trees; the lure of the exotic; and trees in the countryside.

Notable among the exhibits are Fir Trees At Hampstead, John Constable’s largest-ever tree drawing, and Berkshire Landscape by Paul Nash’s brother John, which contrasts two dead trees with a background of summer foliage.

The gallery’s soft lighting, natural colour palette and refined yet rustic design creates an ambience characteristic of a walk in the woods, an effect that is simply enchanting.

And for those who need convincing that a journey to Bedford is worth it for this show, consider this: The Higgins is in the town’s Castle Gardens and – appropriately for this exhibition – surrounded by walnut, sycamore, horse chestnut and mulberry trees.