Great British Boltholes: Bodysgallen Hall is a grand blast from a genteel past

By Vicki Reeve For The Mail On Sunday

Who doesn’t love a National Trust outing? It’s the country houses that attract me. Delusions of grandeur, yes, but I love a sojourn in an imposing old pile with acres of private land.

And so to Bodysgallen Hall, a National Trust-owned, Historic House Hotels-run property near Llandudno.

As we approach through lush, sheep-filled greenery, the handsome, pinkish-sandstone house stands out. Built around a 13th Century tower, erected to warn of attacks on Conwy Castle, the mainly 17th Century house nestles on Pydew Mountain.

Imposing: The impressive Hall is set in 200 acres and has views of Snowdonia

It has ravishing views over formal gardens (rose and walled; parterre; croquet lawn) and parkland – 200 acres in all – to Conwy and Snowdonia’s majestic peaks, to Great Orme and Llandudno, just up the road. The stately oak-panelled hall, with its coats of arms of the eminent Wynn and Mostyn families above a huge stone fireplace, sets the tone and hints at another side of Bodysgallen: that of a family home.

Although indisputably grand, its plump sofas and armchairs, plus patterned rugs, and a jolly group having drinks, give Bodysgallen a warm atmosphere. This is exuded everywhere, especially in the bar and reception. Throughout are wonderful wallpapers – tracery motifs, raspberry-pink florals. There’s a magnificent drawing room, an inviting library and, nearby, a smart spa.

The main house is off-limits to four-paws, so we stay in the Bailiff’s House, one of 16 pretty cottages in the grounds. The two-floor Superior Cottage Suite is reassuringly old-fashioned in style, and has a cosy sitting room; a kitchenette; modest bathroom and large bedroom with a comfy super-king. There’s a tiny lawn, filled with birdsong, where we sit before dressing for dinner. 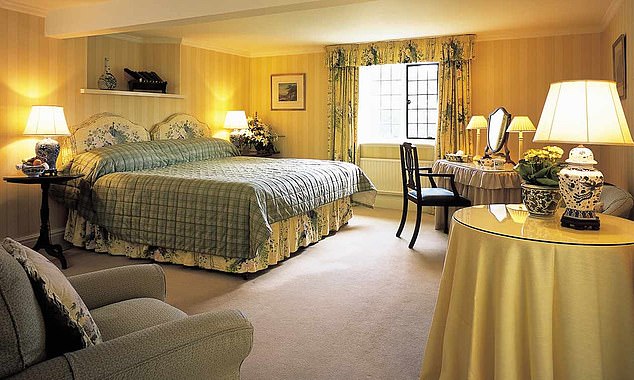 Cosy: Pictured is one of the traditional country-house style suites

The USB: History-laden house with gardens and woodlands provides a genteel experience, plus, with spectacular Snowdonia on the doorstep, beautiful surroundings.

The rooms: You’d neither want nor expect anything cutting- edge here (though there is wi-fi, and TVs). The 15 rooms/suites in the Hall and 16 cottages are traditional country-house style: chintz, flounce and Floris; some four-posters and shortbreads in biscuit barrels.

Bodysgallen Hall & Spa, Llandudno, North Wales. B&B from £260 in the hotel; from £330 in Bailiff’s House. For more information visit bodysgallen.com.