Great British Boltholes: Take a manor built by a PM’s son, throw in William Morris accents and an Icelandic palate, and you have bliss in Birmingham

By Adrian Baker for The Mail on Sunday

The smell of scones being warmed in the Aga as we arrived at our cottage in the grounds of Hampton Manor was the first clue that this fabulous estate is all about the food. If another was needed, it was the view of the Victorian walled vegetable garden which provides some of the ingredients for Peel’s, the Manor’s Michelin-starred restaurant.

Hampton Manor – 12 miles outside Birmingham in the village of Hampton in Arden – was built in 1855 by industrialist Sir Frederick Peel, son of former Prime Minister Sir Robert. Now, at the heart of its 45 acres lies a family-run hotel which combines a passion for food with a flair for design.

In a decade, husband-and-wife team James and Fjona Hill – along with James’s hotelier parents – have transformed Hampton Manor into a foodie paradise that pays homage to designer William Morris and the Arts and Crafts movement.

Yummy Brummie: The smell of scones, wafting from the Aga, and a walled vegetable garden supplying the Michelin-starred restaurant, Peel’s, are among the sensations to greet visitors to Hampton Manor

There are grounds and woodland to explore, while just a five-minute stroll away is the village of Hampton in Arden, with its quaint timber-framed cottages and 17th Century pub, The White Lion.

The rooms: The 15 rooms and suites – and the separate two-bedroom cottage that was our base – are individually designed and adorned with Morris’s nature-inspired patterns. They are decadent and glamorous with a hint of Scandi warmth. And there’s a nice twist if you like tech: our cottage, with its own separate wi-fi, was wired for sound in every room, powered from a Spotify-loaded Mac in the ‘scullery’.

The food: Morris’s influence even extends to the pre-dinner cocktail menu in The Parlour, the Manor’s lounge. After canapes including veal sweetbread with curry sauce, I opted for The Icelandic Saga (Morris’s poetry drew on Icelandic literature), a cocktail with Reyka vodka, orgeat, mint and saffron. 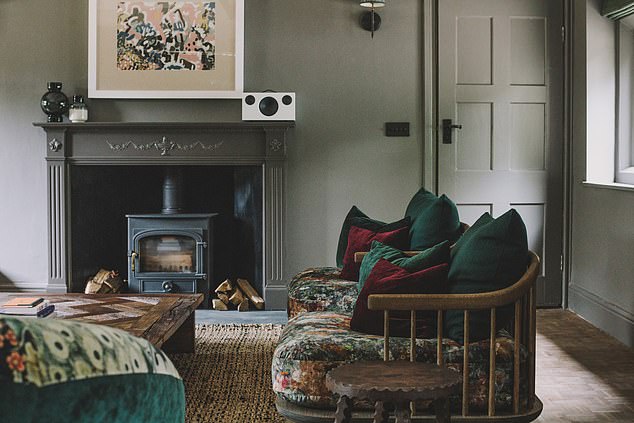 Cottage industry: The interior of a separate residence at Hampton Manor, which has two rooms. The main house has 15 rooms and suites, decorated with William Morris-inspired prints

Next door in Peel’s, head chef Rob Palmer makes stunning British dishes. I went for the four-course tasting menu (£75) with wine to match (£55). Highlights were a crab dish with Jerusalem artichoke, coriander and lime paired with Wild Air, a South African 2017 Sauvignon; and longhorn beef with cauliflower, deliciously soft Tunworth cheese from Hampshire and black garlic. This was accompanied by PHD, a 2016 red from the Western Cape’s Blankbottle. This blackcurrant-flavoured delight was conceived when a wine-maker met a neuroscientist on a flight.

The USP: In just two weeks in 2016, Peel’s restaurant won a Michelin star, a Michelin Welcome and Service Award and its fourth AA rosette. But the real pleasure is that the Manor accomplishes all this without pretension. It is not another hipster outreach. Instead, it is quietly delighted at how much the hard work has paid off and will continue to do so as it expands and adds rooms in the next few years.

The industrialist Sir Frederick Peel would have been proud.