Great British boltholes: A review of The Swan Inn, Somerset

Diarist Martha More once described the people of Rowberrow as ‘savage and depraved’, ‘brutal in their natures’ and ‘ferocious in their manners’.

To be fair, that was back in 1790, when this corner of Somerset was a mining hub where men hacked out the mineral calamine. Today’s locals are far more agreeable.

Not least in The Swan, a Grade II listed 17th Century inn made up of three former miners’ cottages. Indeed, the staff couldn’t be less ferocious, while the sole example of depravity comes in how quickly I devour my meals here.

Stellar location: The Swan Inn is made up of three former miners’ homes

The Swan sits on the edge of the Mendip Hills Area of Outstanding Natural Beauty, about 40 minutes’ drive from Bristol. Interrupted by ravines and outcrops, these unsung, handsome limestone hills yield lusty circular hikes, especially heather-topped Black Down and cave-ridden Ebbor Gorge.

Just north is the Iron Age hill fort of Dolebury Warren, while Cheddar Gorge and the enchanting Somerset Levels are within day-trip range.

Post-hiking, my weary thighs delight in The Swan’s slumberous atmosphere. A 2018 refurbishment has heightened its cosiness, with an assortment of comfortable brown leather and tartan chairs fireside in one room and leather banquettes in another. The high tables and chairs in the bar are laid for groups of six.

Before eating, I unwind with a pint of golden ale from The Swan’s owners, Butcombe Brewing Co. 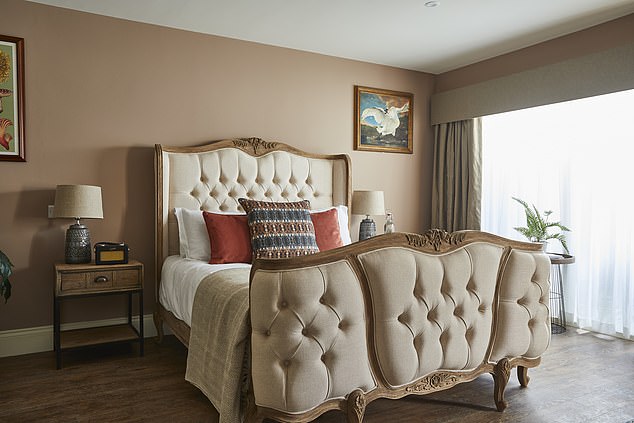 Cosy: The four modern rooms in an adjoining former stable complement the more romantic but smaller ones above the pub, writes Richard

All around are sounds of salubrious contentment: soft soul music, the skitter of cutlery on plates and happy chatter. The guests include families and several young couples enjoying a date night.

Rooms: Four modern rooms in an adjoining former stable complement the more romantic but smaller ones above the pub. Each of the new additions has an outside table, an en suite bathroom with organic toiletries and a minibar with local goodies.

Food: Pub classics such as a cheese toastie reinvented with Westcombe cheddar, parmesan, mozzarella, spring onions and St Martin’s sourdough. After yummy lamb scrumpets with salsa verde I opted for one of its speciality flatbread pizzas – delicious and superb value.

The next morning, my full English breakfast includes scrumptious local bacon. Preceding it is toast or a good croissant accompanied by pots of tea or proper, cobweb-scattering coffee.