The great-grandmother of a California boy who died under suspicious circumstances while in is parents’ care has claimed she was banned from attending his funeral after accusing his mother and father of child abuse.

Eva Hernandez, who often looked after four-year-old Noah Cuatro, of Los Angeles, made the abuse accusation after authorities began investigating the child’s July 6 death, citing trauma on his body inconsistent with the drowning his parents said occurred. 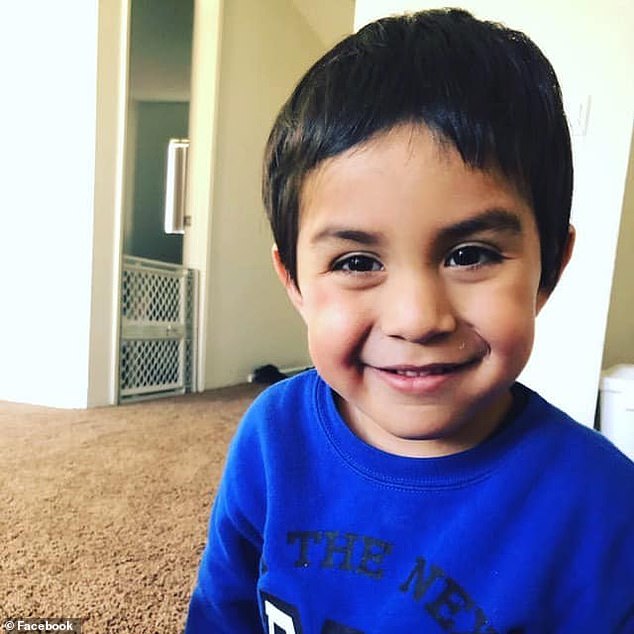 Noah, 4, died on July 6 after his parents claimed that he nearly drowned in the family’s apartment complex swimming pool. Authorities said there was trauma on his body inconsistent with drowning and are now investigating his death

Civil Rights activist Najee Ali held a silent protest during the service on Hernandez’s behalf, holding up a pictures of the boy with the words ‘Justice for Noah’ emblazoned above.

‘It was a week ago Eva Hernandez the grandmother of 4 year old Noah Cuatro who was sexually assaulted and murdered by his parents asked me to hold up a picture of Noah at his funeral because she was banned by his killer’s for confirming the child abuse and demanding justice for Noah,’ Ali wrote on Facebook. ‘Today I kept my word.’

Noah’s parents took him to the hospital in the afternoon on July 5, claiming that he had nearly drowned at their apartment complex swimming pool. But medical staff soon became skeptical of the story after they found signs of trauma on the four-year-old’s body.

Noah died at the hospital the next day.

Authorities have not yet released Noah’s autopsy findings, but attorney Brian Claypool told KABC that a detective told Hernandez that no water was found in the boy’s lungs and that he had bruising on his body. 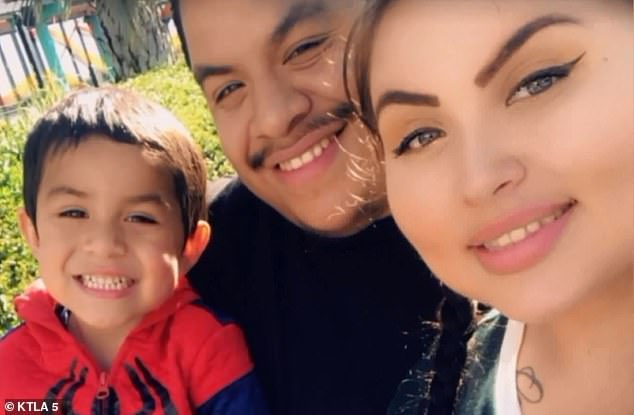 Noah (with parents Jose and Ursula Cuatro) was said to have been in and out of foster care since he was born. In May, authorities went to court seeking a removal order

Hernandez (pictured), who often cared for Noah, said that she looked after the boy for the last two years and that he begged not to go back to his parents in November 2018 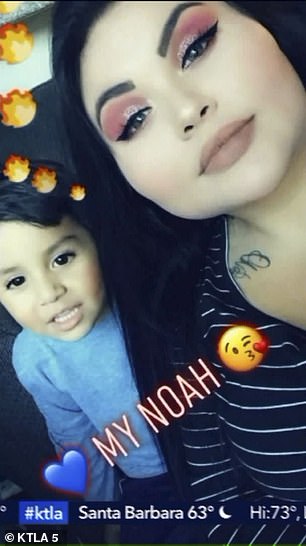 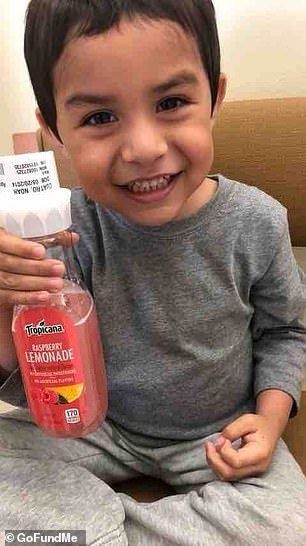 Hernandez said that Noah’s demeanor had changed during the nine months he was in his parents care. He is pictured at left with his mother, Ursula, and in an undated pictured at right 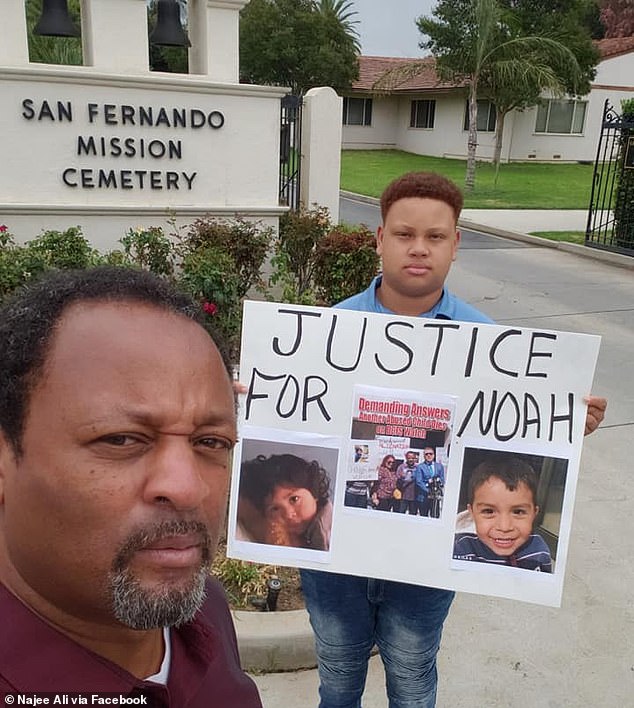 Civil rights activist Najee Ali (left) and his son are pictured during their silent protest outside Noah’s funeral Thursday. They protested because Hernandez had been barred from attending

Although no arrests were made connected to his death, Noah’s parents are said to be under investigation now.

Just days after his death, Hernandez spoke with multiple news outlets telling reporters that Noah had been taken from his parents’ care a number of times, first beginning when he was just a baby.

He supposedly spent the first few months of his life in and out of foster care before Hernandez was able to gain custody of him.

She cared for him for six months until Noah was allowed to return to his parents’ care. But just a year later, Jose and Ursula lost custody once more with officials determining that Noah had been neglected.

Police documents claim that he was so malnourished that he couldn’t walk.

After another stay in foster care, Hernandez cared for him for two years until last November when he pleaded not to go back to his mother Ursula and father.

‘I told the social workers, “Please, he doesn’t want to leave. He wants to stay here. He begged me”,’ Hernandez told KTLA. ‘He would hold on to me and say, “Don’t send me back, grandma.” I don’t know. I couldn’t do anything. I just had to send him back.’

Noah was returned to his parents again last November, and Hernandez cried that by the time she saw him again six months later, the little boy was clearly in need of help.

Over the nine-months back in the care of Jose and Ursula, Hernandez claimed the boy’s demeanour had completely changed.

She also said that the boy seemed nervous and hesitant in the presence of his mother. Other relatives shared Hernandez’s concerns that he wasn’t been looked after properly, she said.

‘He was not the same little boy anymore,’ Hernandez continued. ‘He looked so sad and withdrawn.

Between March and April of this year, several reports of suspected child abuse involving Noah came to light, with one report claiming that the child had gone to the hospital with bruises on his back.

The following month, a caseworker filed a 26-page request to again remove Noah from Jose and Ursula’s custody, following accusations the boy’s father had kicked Ursula and their children in public.

Even though a judge granted the request, Noah was never returned to foster care. 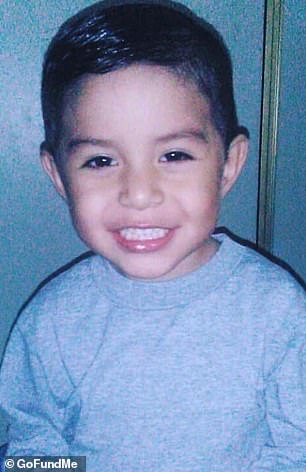 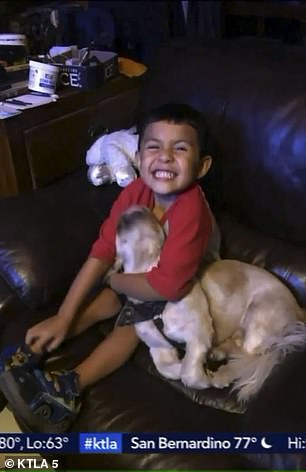 Child services had gone to court in May seeking a removal order for Noah (pictured) after accusations that his father had publicly kicked him, his mother and two siblings. But authorities did not remove the boy from his parents’ custody despite the order being granted 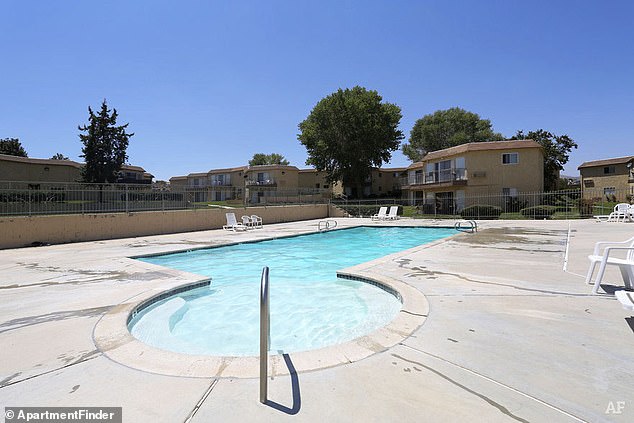 Hernandez believes that if the Department of Children and Family Services (DCFS) had responded to a complaint by her in different way, Noah might be alive today.

She asked them to visit the home unannounced but they warned the parents they were coming and when they carried out checks, everything seemed fine.

Noah had a one-month-old baby brother, a two-year-old sister and an older brother who has also been in and out of foster care.

‘If they would have taken him out of there, he would still be here,’ Hernandez said. ‘The kids don’t have a voice.’

The Los Angeles County Sheriff’s Department have since launched an investigation into the boy’s death.

There was no lifeguard at the Mountain Shadows apartments pool and detectives are looking to obtain security footage and speak to witnesses.

Noah’s parent’s made the 911 and authorities said other relatives were present at the time. His cause of death has not been declared.

The three other children have been removed from the home that neighbors say the family moved into a month ago.

It’s the third high-profile case involving an Antelope Valley boy who died in a home placement by DCFS. Anthony Avalos, 10, of Lancaster died in June 2018 and Gabriel Fernandez, eight of Palmdale died in May 2013.

Los Angeles County Supervisor Kathryn Barger said more details will be available when ready: ‘It’s important to get the facts. When you talk about it not happening quickly enough, this is a deep dive… as we do on all our cases, as we did on Gabriel, as we’ve done on Anthony.’