The Great Lakes have hit a record-breaking 80F for this time of year, almost as hot as bathwater.

The increase comes during a heatwave along the east and the US border with Canada which has produced algae blooms which are harmful to water creatures.

Lake Erie, the southernmost and shallowest of the five lakes, has been by far the warmest; on July 10 its average was 79.52F – 41F above normal and its joint hottest on record for that time of year.

It means that Erie is warmer than the Pacific Ocean beloved by surfers in California and only marginally cooler than the seawater off Florida.

Lake Ontario was clocking temperatures of 77.18F on July 10, that’s about 42.8F higher than normal and also a record for any month of the year.

Lake Erie, the southernmost and shallowest of the five lakes, has been by far the warmest; on July 10 its average was 79.52F – 41F above normal and its joint hottest on record for that time of year 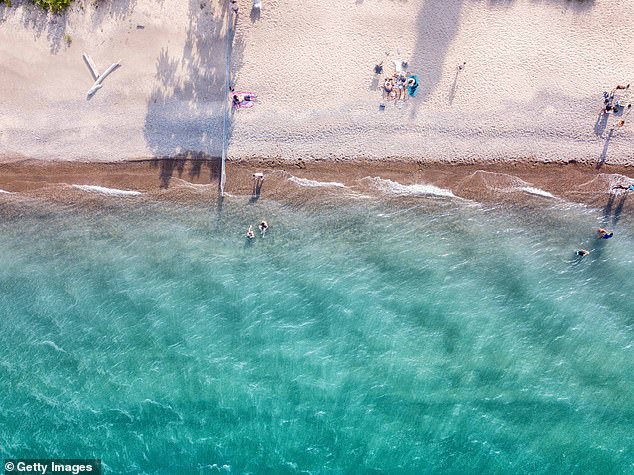 WHAT ARE THE RISKS OF ALGAE BLOOMS?

Technically called cyanobacteria, the ancient class of organisms that create the blooms are present nearly everywhere water is found, but thrive in warm, still bodies like lakes and ponds.

They also create a unique class of toxins, the impact of which on humans is only partly understood.

Long linked to animal deaths, high doses of the toxins in humans can cause liver damage and attack the nervous system.

In the largest outbreaks, hundreds have been sickened by blooms in reservoirs and lakes, and officials in some areas now routinely close bodies of water used for recreation and post warnings when blooms occur.

But less is known about exposure at lower doses, especially over the long term.

Small studies have linked exposure to liver cancer – one toxin is classified as a carcinogen, and others have pointed to potential links to neurodegenerative disease.

Lake Huron was searing at 72.14F on July 9, also 42.8F over its norm and the hottest ever temperature for July.

To the west, Lake Michigan was at 75.02F on July 8, it too around 43F above what would be considered normal by scientists.

Lake Superior was the only one which didn’t smash the 70F threshold, it being at the highest altitude of the five.

The temperatures are ‘abnormally high compared to the most recent years,’ Andrea Vander Woude, manager of the Great Lakes CoastWatch program.

‘Last year was really cold and there was a lot of rain. This year there hasn’t been as much rain, and it’s been persistently hot,’ she told The Washington Post.

Water temperatures soared in the last week before a cold front over the weekend brought in frigid storms which helped to cool the lakes.

But temperatures usually peak in August and Vander Woude told the paper she expects it to rise significantly higher: ‘We haven’t even reached the tip of that curve that usually occurs later [in the summer].’

She added that NOAA aircraft had noted blue-green algae or cyanobacteria on Lake Erie which has previously affected the water supply in Toledo.

‘This is the second earliest we’ve seen [the algae] in our data since 2002,’ Richard Stumpf, an oceanographer with NOAA, told the Post in an email. ‘The earliest was in late June in 2018.’

The cyanobacteria can produce a liver toxin called microcystin that is harmful to humans and animals.

The level of toxicity at a given time isn’t connected to the size of the bloom, because toxins in a larger mass may be less concentrated than in a smaller one. 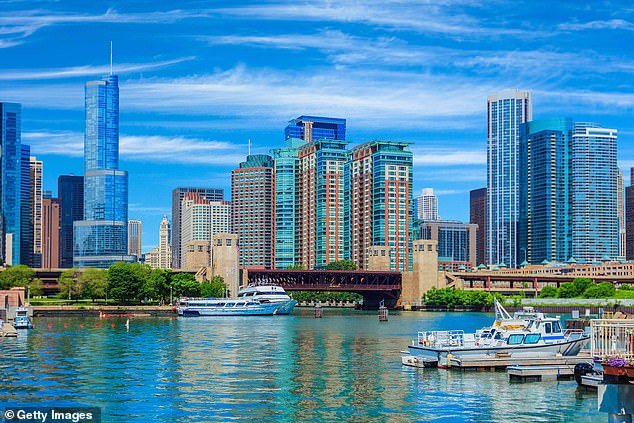 Chicago skyline and waterfront of the Chicago River, Illinois, which flows in from Lake Michigan

NOAA and other U.S. and Canadian agencies have set a goal of reducing the Lake Erie bloom to a 3 on the index, which was last seen in 2012.

In addition to the algae, Stumpf said that fish do not do well in overly warm water because they swim to the cooler parts of the lake, thereby diminishing oxygen levels in those areas.

Climate Central, a science communications nonprofit, noted that the increasing temperatures were part of a trend.

Last year it wrote: ‘Every Great Lake has warmed at least 1.5F since 1995 (when data became available for all lakes), led by Lake Ontario at 2.2F.’