Scientists have recorded the first documented evidence of a great white shark attacking and killing an enormous humpback whale.

Video taken from a drone off the coast of South Africa shows the 13-foot long shark called Helen hunting the whale which was around 33ft long and in ill health.

Ryan Johnson, a marine biologist who observed the massacre, says the ordeal lasted about 50 minutes before the whale eventually died.

Mr Johnson says the great white was very strategic in taking down the behemoth, and targeted its most vulnerable area before drowning the ailing whale.

Footage reveals the first documented evidence of a great white shark attacking and killing an enormous humpback whale (pictured). Ryan Johnson, a marine biologist who observed the massacre, says the ordeal lasted about 50 minutes before the whale eventually died

‘The shark was very strategic about it, there was no hesitation, it was as if she knew exactly how to go about it,’ Ryan Johnson told The Times.

‘The first strike was at the whale’s tail, the skinny part above the flukes where she could get her mouth all the way around.

‘She managed to open a vein and blood immediately started pluming out.’

The initial blow to the tail led to profuse bleeding and Mr Johnson continued to record the event via drone, which required a total of six battery changes.

The groundbreaking event happened in February when the whale had been isolated for several months and became trapped in discarded fishing equipment.

Helen the great white relented after the initial blow and waited for the whale to grow weaker as it slowly bled out.

After approximately 30 minutes, the shark renewed its attack.

Helen this time went for the head of the whale and latched on, trying to submerge the marine mammal.

Despite being dwarfed by the giant whale, Helen was trying to pull the animal underwater and keep its blowhole under the water level.

Mr Johnson tells The Times that the shark succeeded and the whale never again surfaced, seemingly defeated after an agonising death lasting almost one hour. 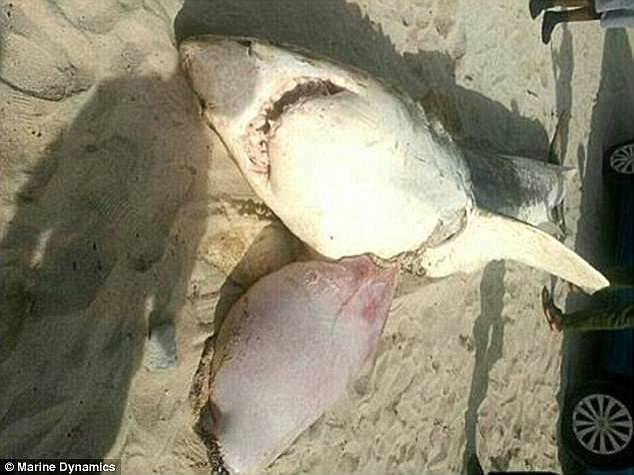 It is deeply uncommon for whales to be predated by sharks, but it is known to occur the other way round. Pictured, a great white which washed up in South Africa in 2017 . It was gashed open and had its liver removed, believed to be by hunting killer whales

Mr Johnson was observing the whale, which had mottled skin and had become separated from its pod – both indicators of poor health – when the shark attacked.

When the footage was reviewed by the ocean expert, Mr Johnson realised he recognise the predator as Helen, one of 50 sharks he had tagged and studied back in 2013.

‘Helen looked very informed about what she was doing, which made me curious about whether she was an experienced whale killer, was acting on instinct or on plain intelligence by detecting her prey was weak,’ Mr Johnson said.

It is deeply uncommon for whales to be predated by sharks, but it is known to occur the other way round.

For example, two weeks ago a great white carcass was found washed up on a South African beach with a deep gash between its two pectoral fins and its liver and heart missing, hallmarks of a killer whale hunt.

The footage will be broadcast on National Geographic Wild on July 17 as part of a documentary called Shark Vs Whale which forms part of the annual SharkFest.

Sharks are the most efficient predators on earth and have long terrified humans.