Unsuspecting surfers had a brush with death when a man-eating Great White shark swam right below them as they waited to catch a wave.

Drone footage shows the fearsome predator – estimated to be 10ft long – cruising among the six surfers and a lone kayaker who have no idea that a lethal attack could be just seconds away.

The shark goes undetected for 25 seconds until a kayaker in a green canoe nearly bumps into its tail and suddenly realises a Great White is right beneath them.

He shouts an alert to a friend on a surfboard whose legs are just a couple of feet from the jaws of the Great White and, realising the danger, he suddenly paddles furiously away.

These surfers had no idea that a Great White shark was swimming just beneath them as they waited to catch a wave on Tuesday at Plettenberg Bay in Western Province, South Africa, in just six foot deep water 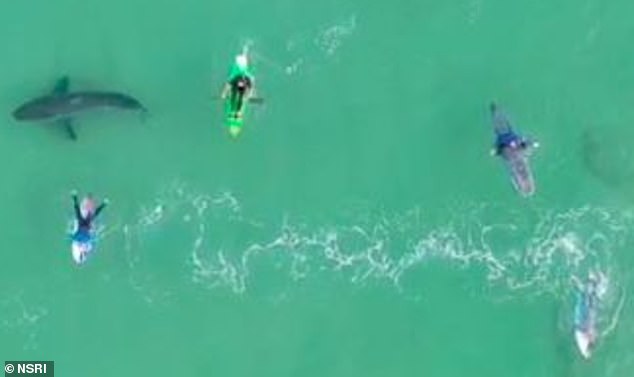 The surfer catches a wave to take him safely from the shark, which casually turns away from what could have been an easy meal and glides off back along the coast.

As the warning reaches the other surfers, they too paddle towards the shore and alert the lifeguards who clear the beach and order everyone out of the water.

National Sea Rescue Institute press spokesman Craig Lambinon said they were appealing to all surfers, paddle boarders and bathers to be on full alert for Great White sharks.

He said: ‘Those using the water around the Southern and Eastern Cape need to be cautious due to a high number of Great White shark sightings and close encounters at present.

‘The increase of sharks at this time of the year is part of the normal aggregation of these animals that take advantage of natural prey like seals and fish coming close in shore. 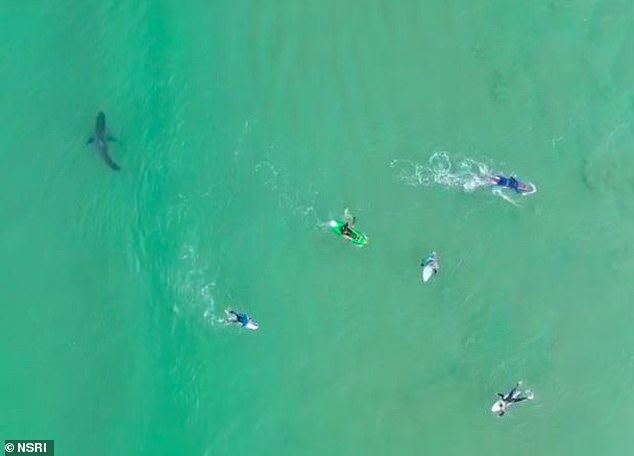 The shark goes undetected for 25 seconds until the kayaker in a green canoe nearly bumps into its tail and suddenly realises a Great White is right beneath them. The others in the group are alerted and they all paddle back to shore unharmed

‘A large amount of shark sightings and some encounters have been reported close in shore along the Plettenberg Bay coastline over the past few weeks and on Sunday and today.

‘Drone footage of a large Great White shark in close proximity to surfers in Plettenberg Bay today highlights the urgency of this safety appeal as they are in very close,’ he said. 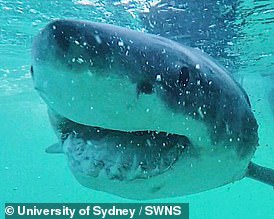 Great Whites swim at up to 37mph at full pelt and burst out of the water from below their prey. (File photo)

Sarah Waries of City of Cape Town Shark Spotters programme said: ‘The behaviour seen in this drone footage shows the shark is aware of the surfers and is investigating them.

‘It is important for people to remember that Great White sharks are naturally inquisitive apex predators and that although shark bites are rare, water users must understand the inherent risk associated with sharing the ocean with these animals and change their behaviour accordingly to avoid encountering sharks’.

The NSRI carry emergency medical shark kits on all their sea rescue craft and rescue vehicles, and their medics carry the kit in their private cars to respond quickly.

Plettenberg Bay resident Michael Herbst said on social media: ‘The drone footage is just mental and these guys said they had no idea the Great White was there until one of them yelled “shark”.

‘They said they came out the water so fast and the beach was cleared by the lifeguards. For these surfers, it was their lucky day and they will never forget what happened out there as it is on film’.

In the past ten years, 12 people have been attacked and killed by sharks in South Africa – five by Great Whites; four by Bull sharks; one by a Tiger shark; and two by unknown sharks.

There is an average of six shark attacks a year in South Africa with 15% proving fatal and the main culprit is the biggest of them all – the Great White, of which there are thought to be 300 to 500 along the coast.

They can grow up to 20 feet long and weigh up to 2 tons and the largest ever seen was a Great White dubbed ‘Deep Blue’ off the coast of Hawaai last year – estimated to be about 23 feet.

The Great Whites have only one known predator in the oceans which is the Killer Whale and can have as many 3,000 teeth growing in rows in their jaws at any one time up to three inches long.

In 2011 Tim van Heerden, 49, was killed by am 8ft Great White at the Keurboom River Mouth, Western Province, after being pulled off his surf board twice, suffering horrific injuries and dying later in hospital.

The year before, Lloyd Skinner, 37, was attacked by a Great White at Fish Hoek in the Western Province while swimming in chest-deep water and was dragged out to sea after being bitten several times.

in 2012, David Lilienfield, 20, was attacked while on his body board in False Bay, Western Province by a 15ft Great White shark which bit off his leg at the hip and, despite being rescued, he bled to death.