Great White sharks are terrorising the US’ eastern seaboard

Charles Vansant was the first victim, a strapping 25-year-old stockbroker swimming in water only chest-deep when the shark struck.

Anxious to encourage a reluctant dog to join him, the young American hadn’t noticed the dark shadow and tell-tale protruding fin behind him. The Great White shark shredded his left leg to the bone, virtually tearing it from his body.

Mr Vansant was helped back to the beach, but bled to death at a nearby hotel. ‘His death was the most horrible thing I ever saw,’ said a witness.

It was July 1, 1916, but astonishingly Mr Vansant’s grim fate at the smart New Jersey resort of Beach Haven didn’t instantly alert his countrymen to the terrible danger lurking off the coast.

Four more people were to be savagely attacked by the man-eating rogue Great White during a summer of bloodshed and terror that inspired Steven Spielberg’s classic film Jaws.

Thoughts of the notorious ‘Summer Of 16’ are back in the minds of nervous Americans on the country’s eastern seaboard this holiday season as hundreds of huge Great Whites circle menacingly close to the shore.

Between July and early August, some 60 beaches have been closed because of shark sightings around Cape Cod, the Massachusetts summer paradise near where Jaws was filmed.

At least 300 Great Whites — sometimes 15ft-long monsters in just 5ft of water — have been spotted around the Cape. Officials have responded by putting up new warning signs about Great Whites and issuing lifeguards with tourniquets to staunch bleeding from bites. Purple shark-emblazoned warning flags fly at beaches at all times.

Beachgoers can check the mobile phone application Sharktivity that tracks sightings, or listen on radios for shark reports from passing pilots.

After one was killed by a shark last September, local surfers — usually more at risk than swimmers because they venture out into deeper waters — have fitted their boards with gadgets that emit an electrical pulse that supposedly disrupts the predators. 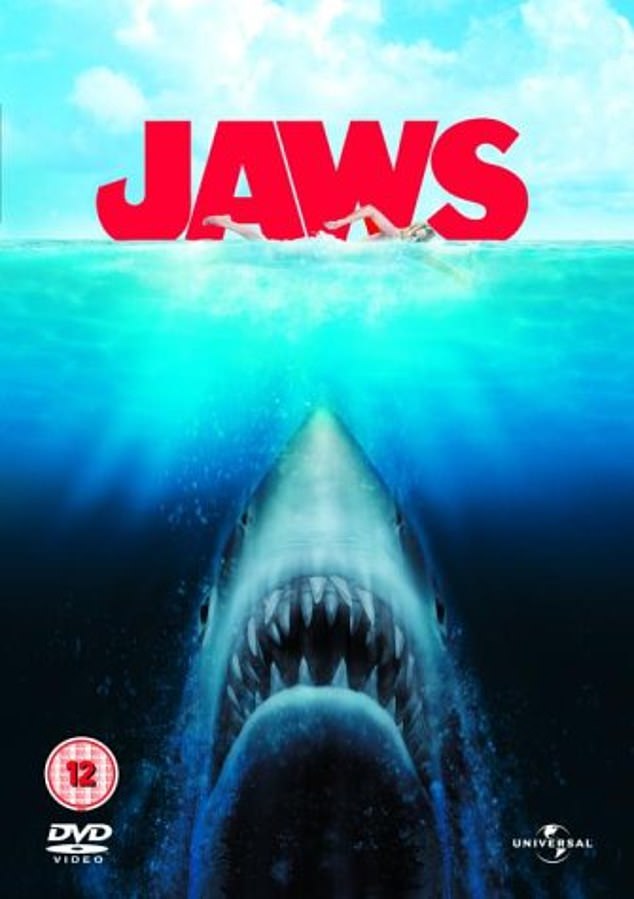 At least 300 Great Whites — sometimes 15ft-long monsters in just 5ft of water — have been spotted around the Cape Cod, the Massachusetts summer paradise near where Jaws was filmed

Others have added stripes to their boards and wear wetsuits that make them look less like seals, the sharks’ favourite prey.

Until the surfer was killed last year, there hadn’t been a fatal shark attack off Massachusetts since 1936. However, laws protecting Cape Cod seals from being hunted have caused numbers to explode and so — it is believed — drawn in the sharks. Yet it wasn’t a deluge of seals but of people that presaged the shark-infested summer of 1916. Expanding rail travel had opened up the New Jersey coast’s beautiful sandy beaches to hordes of New Yorkers who were now splashing around in previously still waters.

When that first Great White realised that here was easy meat, public opinion had been lulled into complacency about the threat. The previous year, the New York Times had run a piece by America’s greatest zoologist, Dr Frederic Lucas, director of the American Museum of Natural History, declaring that sharks were timid creatures with feeble bites.

Other experts agreed that sharks were scavengers that hardly ever came close to shore. And so when Mr Vansant met his fate, some theorised that he had been attacked by turtles, a tuna, a giant mackerel or even a torpedo fired by a German submarine.

Down on the Jersey Shore (then New York’s Riviera), no fears over sharks got in the way of preparations for the July 4 Independence Day celebrations.

Lifeguards, hearing a bloodcurdling scream, turned to see what they thought was a red upturned canoe in the water. It was Charles Bruder, a 28-year-old hotel bellboy, swimming in his own blood that had pooled around him. 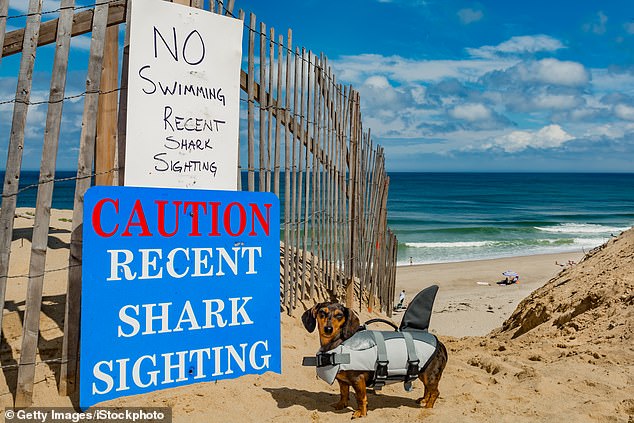 Between July and early August, some 60 beaches have been closed because of shark sightings around Cape Cod

An eyewitness said Mr Bruder had ‘leaped from the water with his right leg gone . . . blood spurting from the wound. He then fell back into the water and the shark made another attack’. When the lifeguards hoisted him into a boat, they discovered both Bruder’s legs had been ripped away just below the knees.

He died before they reached the shore, leaving the doctors who had rushed to the scene to instead treat the dozens of women who fainted in shock.

This time, officials got the message, closing beaches along the coast, installing ‘shark proof’ wire netting and sending out armed patrol boats. Newspapers referred to a ‘sea monster’ and ‘sea wolf’. Wartime anti-German sentiment was high and a reader of the New York Times claimed sharks were following U-boats from Europe.

‘Let’s go kill some sharks!’ became a popular rallying cry. Just as in Jaws, fishermen took to their boats looking for the shark, while police officers reported blasting away at suspicious shadows in the water. However, in the midst of the panic, Dr Lucas and other experts still insisted further attacks would be very unlikely. They were wrong.

Matawan was a nondescript town 30 miles north of Spring Lake and 16 miles inland, with a ‘swimming hole’ in the creek next to a disused wharf. July 12 was a scorching day and six young boys set off to the creek to swim.

A retired sea captain, Thomas Cottrell, saw a suspicious 8ft-long grey shape in the water making its way up the creek on the incoming tide. Before he could raise the alarm, the boys were in the muddy water.

One of them felt a sandpaper-like object graze his leg and, looking down, saw a monstrous tail. Others noticed what appeared to be an old plank in the water. Suddenly, the ‘plank’ surged towards 11-year-old Lester Stilwell and seized him. The other boys fled, running naked down Matawan’s main street screaming: ‘Shark!’ 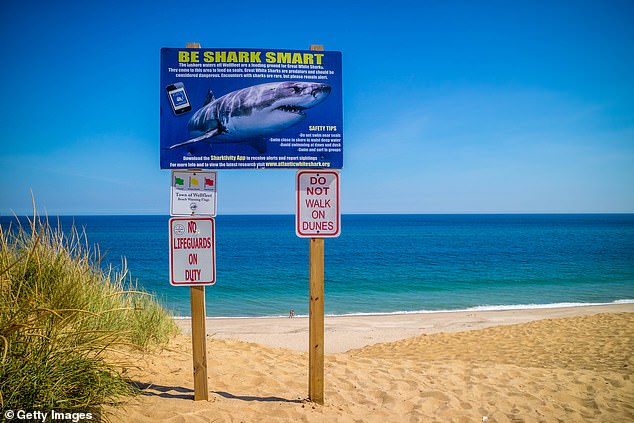 At least 300 Great Whites — sometimes 15ft-long monsters in just 5ft of water — have been spotted around the Cape. Officials have responded by putting up new warning signs about Great Whites and issuing lifeguards with tourniquets to staunch bleeding from bites

Local people ran to the swimming hole and found the water tinged red but no sign of Lester. One, Stanley Fisher, jumped in and spotted the boy’s body. He grabbed it and was back by the bank and getting out when the shark bit him.

Mr Fisher was repeatedly pulled under and resurfaced four times before he managed to break free. His right thigh was stripped of 10lb of flesh. He died later in hospital, his last words being: ‘I did my duty.’

Half a mile downstream, other boys were swimming off a dock when they heard faint cries of ‘Shark!’ and hauled themselves out. Joseph Dunn, 14, had his hands on the bottom rung of the ladder when he was seized.

The boys formed a human chain and, with the help of arriving adults, rescued Joseph after a vicious tug-of-war with the shark. His left leg had been torn to ribbons, but he survived.

On July 14, Michael Schleisser and his friend John Murphy were out fishing in an 8ft motorboat off Matawan when something tugged the boat so violently it stalled the engine and a shark dragged the vessel backwards.

Standing at the stern, Mr Schleisser hit the thrashing fish with an oar handle until it stopped moving.

They signalled for help and were towed to shore where the 350lb Great White was laid out and dissected.

Its stomach contained a large quantity of fleshy material and bones weighing 15lb, including the shinbone of a boy. The evidence indicated that a single rogue man-eater had been responsible for all the carnage. There were no more attacks that year and no more confirmed deaths from sharks on the U.S. coast for another 20 years.

This summer, holidaymakers at Cape Cod can only hope no such killer returns to stalk the beaches.