Victorious Ryder Cup captain Thomas Bjorn hailed his magnificent team as the greatest European side of all on Sunday night — but was left cursing the one mistake he made all week.

The big Dane had told his team that if they won by a large margin he would get a tattoo done of the scoreline, and his team-mates left him in no doubt they expect him to keep his side of the bargain after their 17½-10½ thrashing of the Americans.

‘What I will say is that it will be going on a part of my body only Grace (his partner) will see,’ said Bjorn. ‘That was definitely the worst decision I made this Ryder Cup.’ 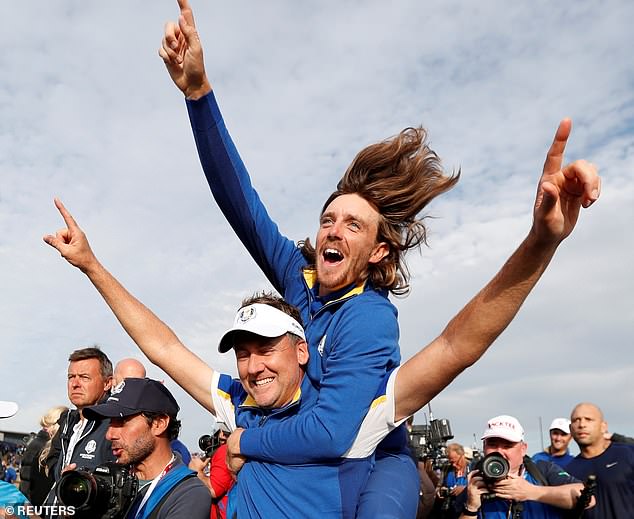 ‘No, it was the best,’ teased Sergio Garcia, who won his singles to become the all-time leading Ryder Cup points scorer. ‘It gave us something extra to fight for.’

Modest Italian Francesco Molinari clinched the winning point to become the first European to win five matches out of five.

‘This was even better than winning the Open in July,’ he said. ‘I was lucky enough to be a member of two previous winning Ryder Cup sides but I never contributed much. It feels so good to give something back after climbing on their shoulders in the past.’

The delirious scenes afterwards included Ian Poulter dressing up in a pillar box outfit — he is known as The Postman because he always delivers — and the Englishman said mischievously: ‘When I get home to Florida I’m going to put it on and post some letters to my American neighbours.’ 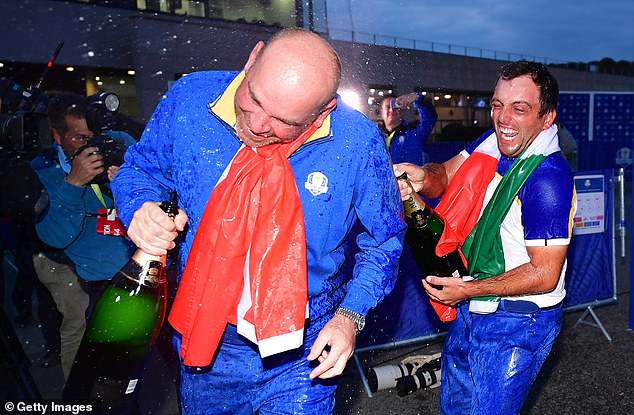 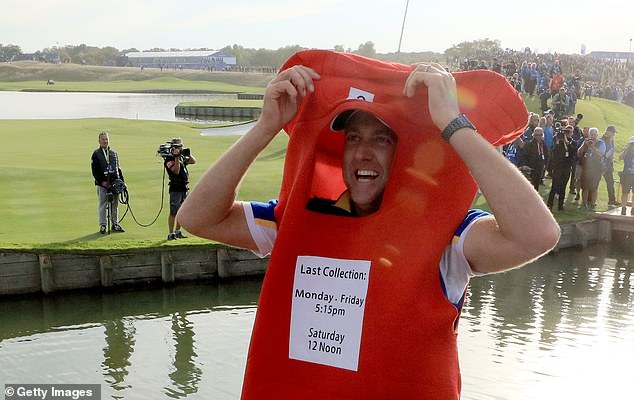 For Bjorn, the victory felt extra-special after his four wildcard picks all showed their class, with Garcia, Poulter and Henrik Stenson winning their singles matches and Paul Casey chipping in with a half-point.

‘I’m not very good at maths but I think if you add up the points they contributed over the three days, it probably comes to the difference between the two teams,’ he said. ‘I think I’m entitled to say I got it right.’

Opposite number Jim Furyk was dignified to the end. 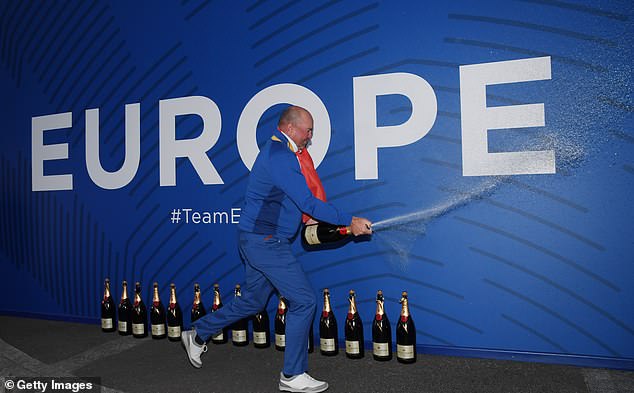 ‘We got beaten by a better team and Thomas was a better captain,’ he said.

The week was a disaster for America’s most celebrated pair, Phil Mickelson and Tiger Woods, who didn’t pick up a point between them. Mickelson, playing in his 12th Ryder Cup, vowed to make it back for Whistling Straits in 2020. ‘I don’t want to go out on this note,’ said the 48-year-old. ‘I want to fight hard and make the next team.’

Woods acknowledged seven events in the last nine weeks, including an emotional victory at the Tour Championship the previous Sunday, had taken its toll. ‘For me it’s been a lot of golf in a short period of time after so long out, but it has given me a better understanding of what I can endure,’ he said.