Skopelos — the name of an island and its principal town in the Sporades archipelago of the Aegean — is not so much unspoilt as never improved.

My wife and I have been enjoying its rough charm for a long time, and hope to be back soon now that Greece is sending positive messages about welcoming the vaccinated this summer.

Last year, as the pandemic took hold, we were warned ‘there’s no oxygen on the island’. The medical centre is primitive. A deterrent, we found.

Skopelos is a giant green eruption in blue water, one of the peaks of a submerged mountain range. In his 1964 book Hellenic Traveller, Guy Pentreath reported it to be ‘unvisited’. That’s not quite true today, but it is a giant rock with nowhere to build a landing strip. The lack of an airport and want of any decent hotels do have a filtering effect.

The journey there is not so arduous that it would humble Odysseus, but it does discourage the idle. Skiathos is the nearest airport and has one of the shortest runways in Europe able to accept commercial jets. Since this runway ends in that same blue water, landing and take-off are not for the faint-hearted.

Alternatively, you can fly to Athens and take a commuter flight to Skiathos. Or a bus from the capital for a four-hour trip to Volos on the mainland, followed by a long hydrofoil or catamaran journey.

Although celebrated for its greenness, the sea approach to Skopelos can be forbidding. Holding onto a taffrail for balance, you marvel at the dark, sunless north-facing cliffs with no points of access. Thus, eventual arrival in the huge harbour of the island is a profound psychological relief. How much more intense must it have been for the ancient traveller? Tellingly, the only book about Skopelos is by Michael Carroll: Gates Of The Wind (1965).

The vicious summer wind is the meltemi, a corruption of Italian for ‘bad weather’. It appears suddenly on the sunniest and clearest of days and can howl disturbingly all night, shaking the shutters and making the house groan.

But this wind creates a romantic insularity, made all the more intense by that unique Greek sense of time when hurrying serves no good purpose. You don’t clock-watch on Skopelos, but tell the hour by the distinctive grumbles of the different ferries.

The Daily Mail’s Stephen Bayley has been enjoying the rough charm of Skopelos, pictured, for a long time and hopes to go back soon now that Greece is sending positive messages about welcoming the vaccinated this summer

Except they do not run when the meltemi blows, increasing the sense of strangeness. There are rental options, but we stay in my sister-in-law’s house at the top of the chora (the old town), a sweaty climb from the port through traffic-free cobbled streets: shocks of white and blue punctuated by pink bougainvillea and green caper plants growing wild. No ascent is ever quite the same. But one constant is meeting a black-clad, bad-tempered priest or a crone making the ‘evil eye’ gesture.

Most days, the house is woken by the sound of a riot — in fact, the tannoy of the fisherman selling his catch from baskets on his donkey. Then comes coffee on the terrace with a near view of the ruined Venetian kastro (castle) and a distant vista across to Turkey.

Skopelos was founded by a son of the god Dionysus and was therefore famed for its wine, rather than its monuments. The local museum has scarcely a shard of pottery, although there is an annual Plum Dance. And, in imitation, Meryl Streep danced on the quayside in 2007’s Mamma Mia — still the island’s best contribution to cultural history. 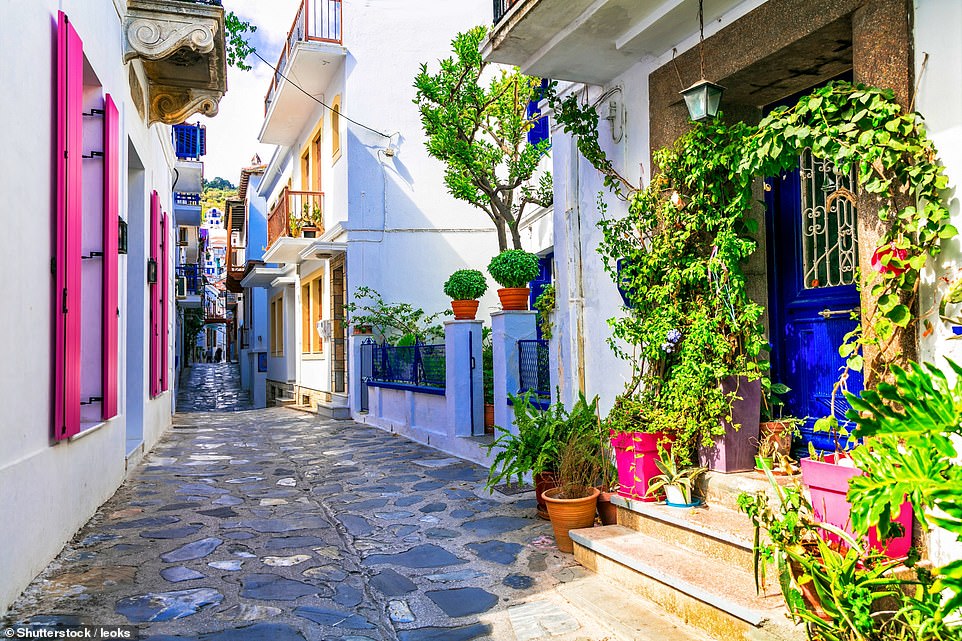 Skopelos is about 30 square miles and has a population of some 5,000. Pictured is one of its traditional narrow streets

Seven nights at Villa Arpaki, which has a pool and is 15 minutes from Skopelos Town, costs from £1,229pp including flights (jet2holidays.com). More details at visitgreece.gr.

The dominant question every day is ‘Which beach?’ A ten-minute walk to deserted Glifoneri and its tiny taverna with reliable fava bean puree, fried anchovies and a kilo of farmyard wine in an anodized aluminium flask? Or an hour’s hike to Glisteri on the ancient paths known as kalderimi, winding through riverbeds and olive groves, swatting flies along the way and feeling a little adventurous?

Alternatively, take a drive to the other side of the island and visit the more sophisticated Limnonari with its purslane salad. This is a challenge in a dusty and violently rattling Suzuki jeep: Skopelos’s roads are so atrocious they test the integrity of even the finest Japanese product.

Late afternoon, it’s back to the port for an icy beer in the municipal kafenion (cafe) where toothless old men play tavli, an aggressive ancestor of backgammon. You could also head to a roof-top bar called Vrachos for a bottle of Assyrtiko and contact with the island’s sole attempt at deluxe cosmopolitanism which does not quite come off.

There are restaurants, locked in a fugue of repetition, but we tend to avoid them.

Day-tripper traps near the ferry offer ‘chicken in pain’ on lurid billboards. There is the finer Molos and its sole rival, always known as ‘not Molos’, but better to return to the terrace and consult Heather Thomas’s excellent The Greek Vegetarian Cookbook (2019).

Skopelos is about 30 square miles and has a population of some 5,000. Despite its lushness, it is an austere place, therefore productive of consumerist fantasies among the residents.

One of the handful of island taxi-drivers has a business card showing a gleaming S-Class Mercedes, while the reality is a second-generation old C-Class dulled by dust with sagging doors and black vinyl seats buffed to a sheen by grateful bottoms. I am also fond of the garbage truck called ‘Theseus’, a rare concession to classicism.

Back at the house: epic views of distant Mount Olympus, the pots of bush basil, bowls of tomatoes and that morning’s fish. A cold moon rises over the wine-dark headland and I think I am Odysseus. But a man can dream. And we will be back soon.