The fire alarm is going off in the Mitato al la carte restaurant at The Royal Senses Resort & Spa in Crete, but no one is worried.

It’s been set off by a slightly larger than usual puff of smoke that’s just been released from the traditional Cretan antikristo grill at the heart of the eatery and it’s a sign that the salted lamb that’s cooking over open flames there is especially juicy tonight.

The sound quickly stops, the musician playing the Cretan lyra in the corner plucks a few chords to mimic the noise, the diners laugh, and everyone returns to eating in the golden glow of the restaurant’s lighting. 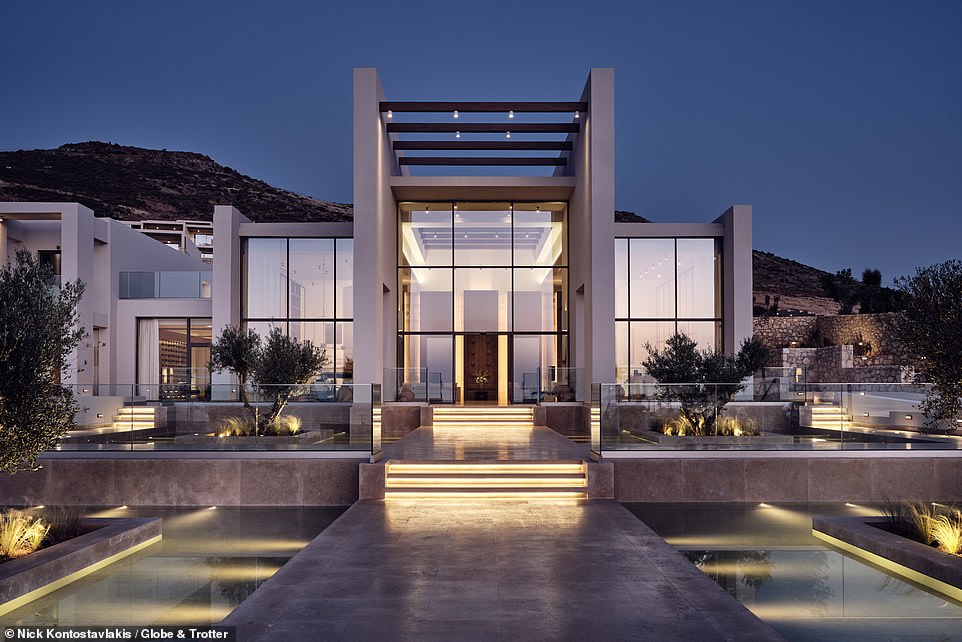 Pictured is the entrance to The Royal Senses. The hotel opened in June 2021 and is the first Hilton to grace the Greek islands and only the second Hilton in Greece 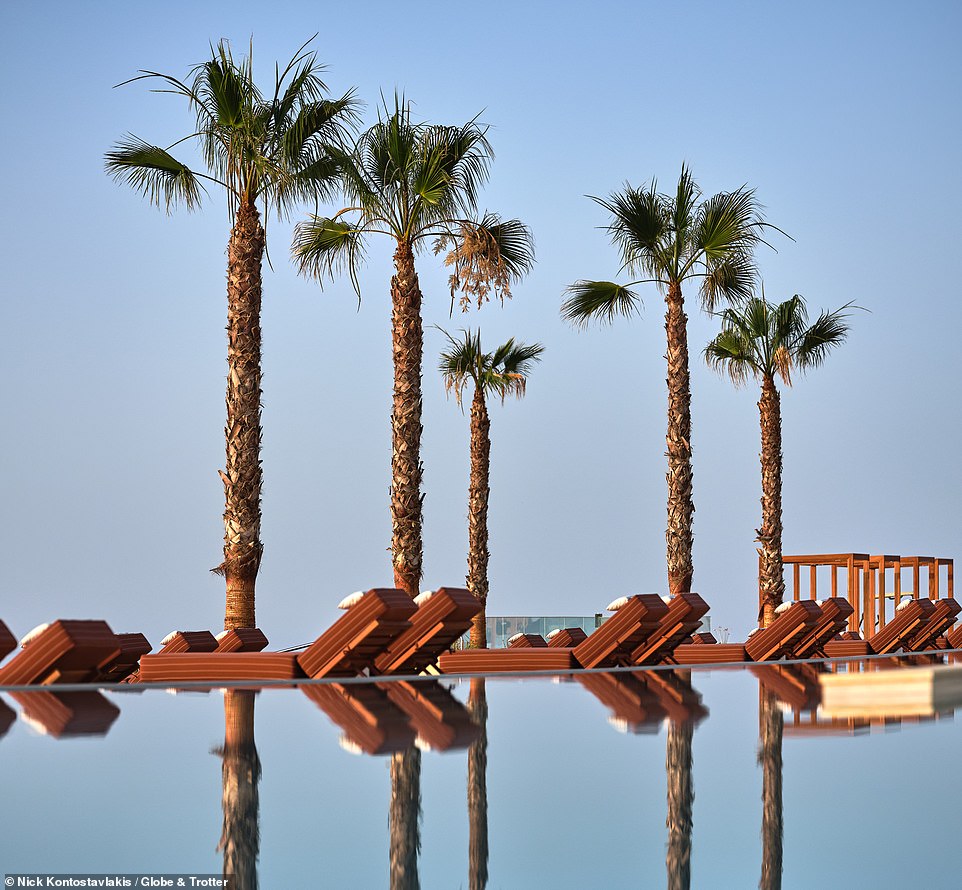 This photograph showcases one of the two landing-strip-long infinity pools that feature in the Royal Senses’ sea-view pool area and some of the sun loungers, with their crash-mat-thick mattresses

I discover during my stay that the antikristo restaurant is just one of several USPs at this new hotel – which opened in June in a sheep-strewn swathe of countryside in the centre of Crete’s north coast.

It’s the first Hilton to grace the Greek islands and only the second Hilton in Greece, so its designers have gone to extra lengths to impress.

The hotel’s funicular is another talking point. This 178-room resort trickles down a hillside and the main way to get from the top to the bottom is on a 100-metre- (328ft) long cable railway. 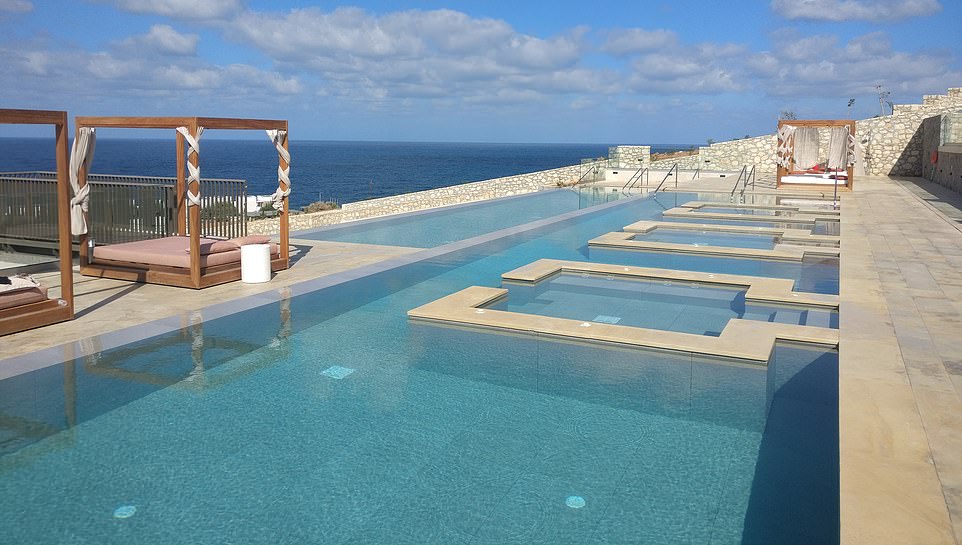 The spa at The Royal Senses pools out for 1,000 square metres (10,763sqft). Pictured is the pool terrace, with its own infinity pool, in-water whirlpools and Bali beds 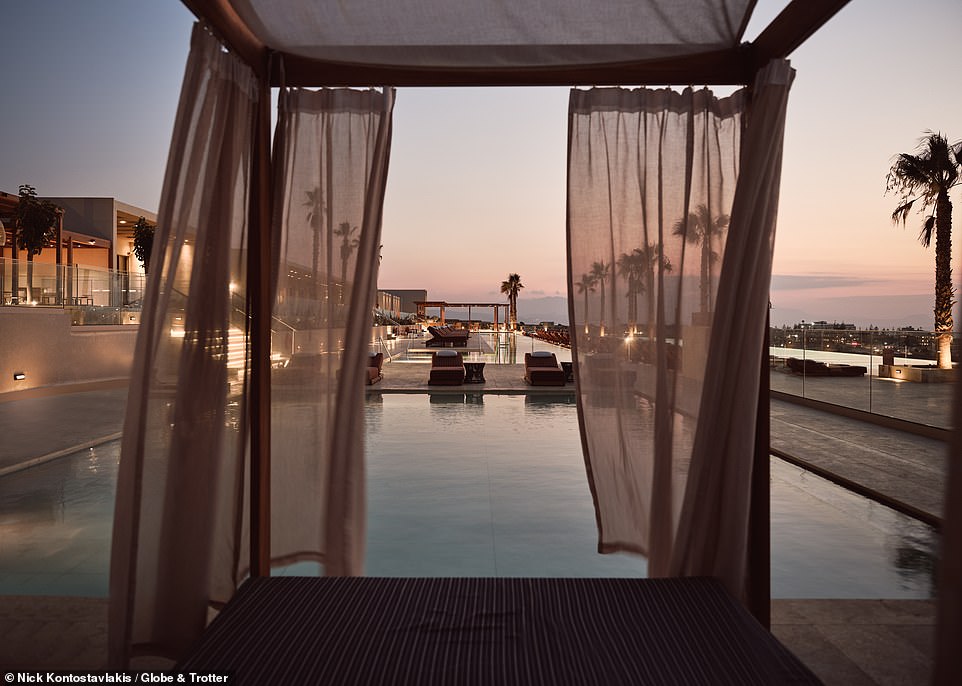 The sea-view pool area is also something to write home about. Its two infinity pools are landing-strip long and surrounded by a dizzying selection of Bali beds and loungers with crash-mat-thick mattresses.

Then there’s the spa. Pooling out for 1,000 square metres (10,763 sq ft), it consists of an outdoor pool terrace and an indoor hydrotherapy centre. I have a Cretan raki and olive oil massage here with an accomplished masseuse called Jenny that leave my muscles soft as a chamois cloth.

The local-twist present in my spa treatment can be found all over the hotel. All terracottas, stone, wood, rattan and rope, the décor of both my Deluxe Room and the shared areas reflects the earthiness of the hotel’s hillside setting. 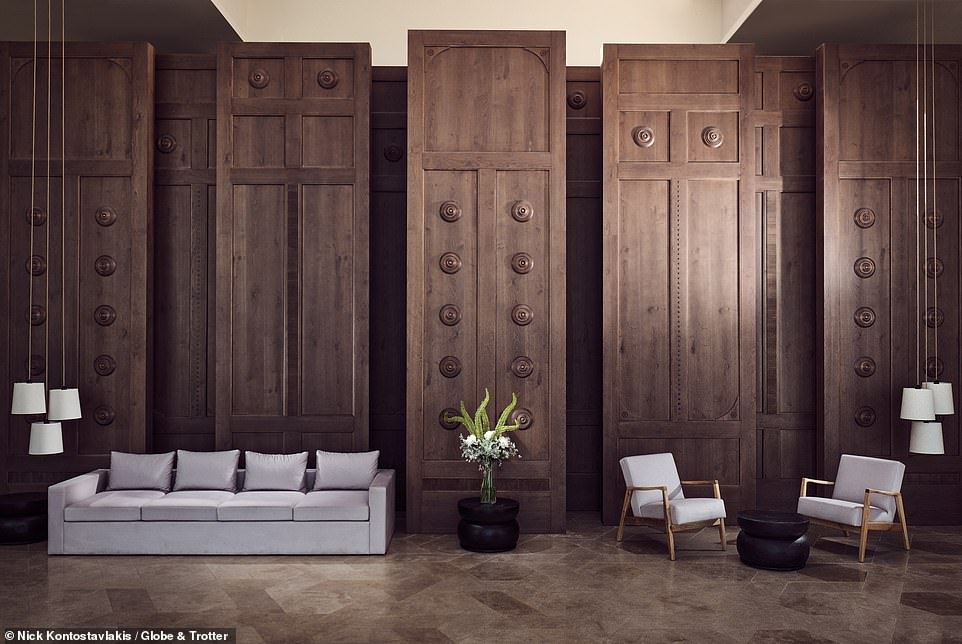 The lobby at The Royal Senses (pictured) is a grand place decorated with lots of wood, stone and earthy coloured textiles to reflect the hotel’s hillside setting 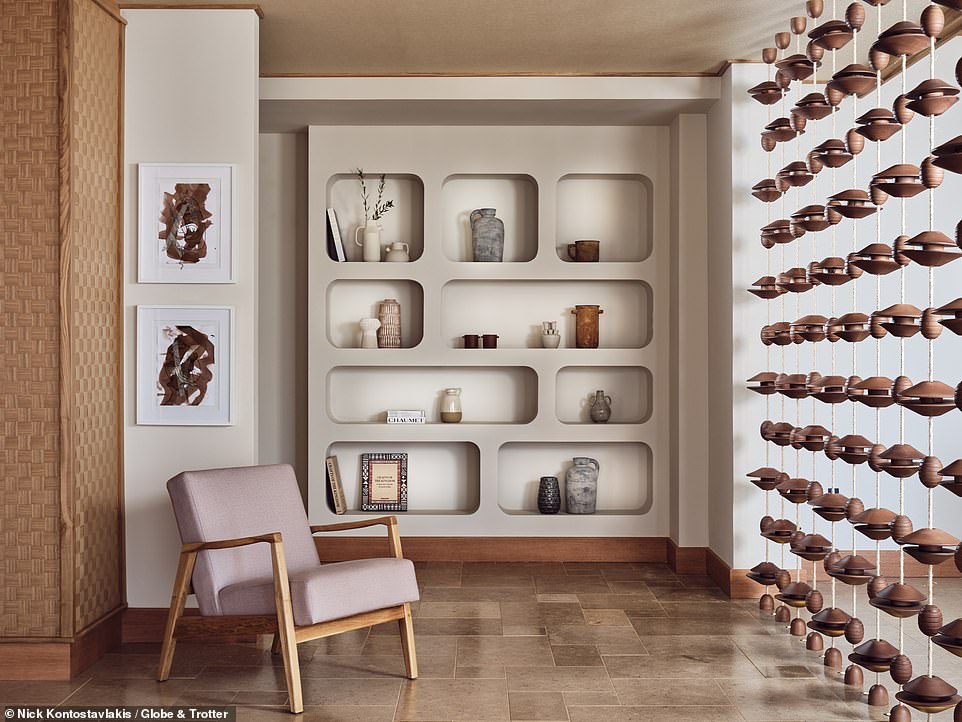 Pictured is a relaxation space in between the check-in desks and the lobby bar at The Royal Senses. Many of the ceramics on the shelves are the work of local artists 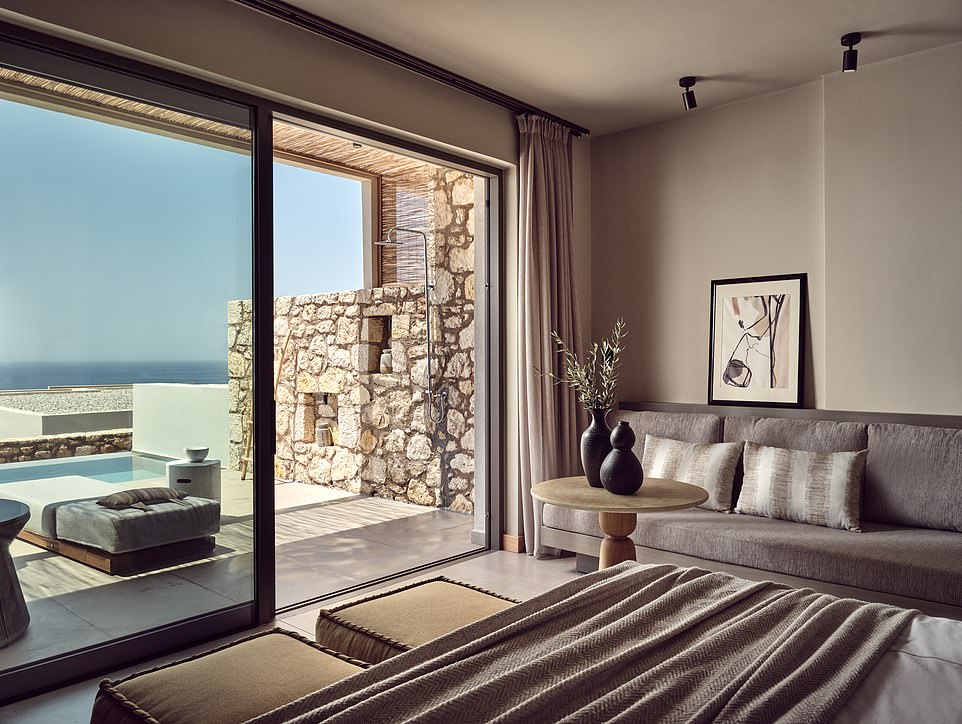 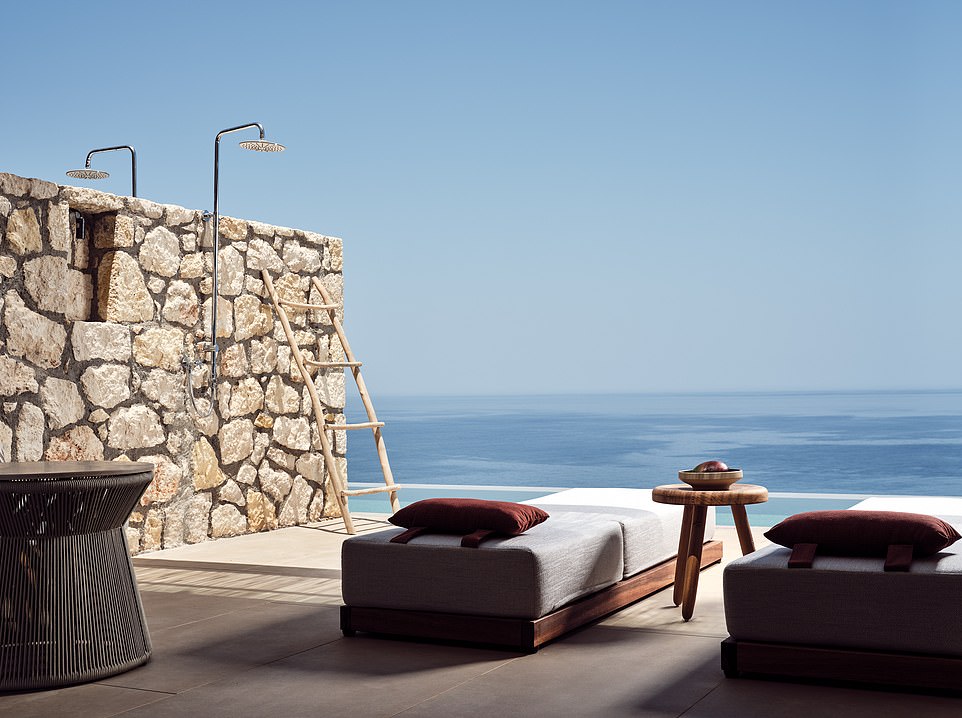 This shot shows the outside area of one of The Royal Senses’ private pool rooms. There are nine categories of rooms at the hotel and five types come with their own pools

I discover that much of the furniture, light fixtures, ceramics and artwork have been sourced from Cretan artisans, too.

The food in the buffet restaurant and lunchtime village square-style eatery, Platia, is also allegiantly Cretan. Think dishes like dakos – Crete’s answer to bruschetta – and Cretan-themed pizza with feta.

Nowhere is the Cretan influence more present than in the hotel’s second a la carte restaurant, Cretamos, though. 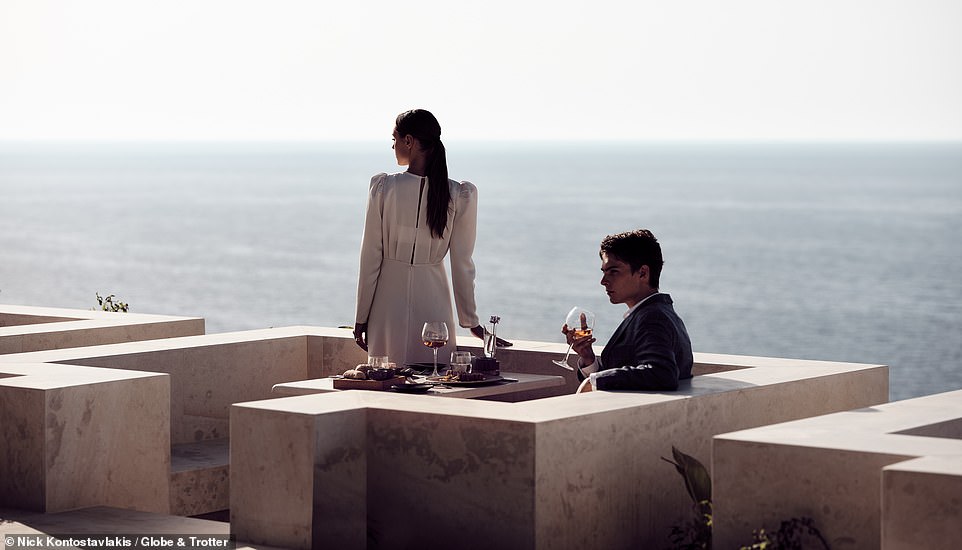 Pictured is one of the tables at the Cretamos a la carte eatery at The Royal Senses where some of the dishes on the menu have historical roots. The stone booth seating here looks out over the sea (file image) 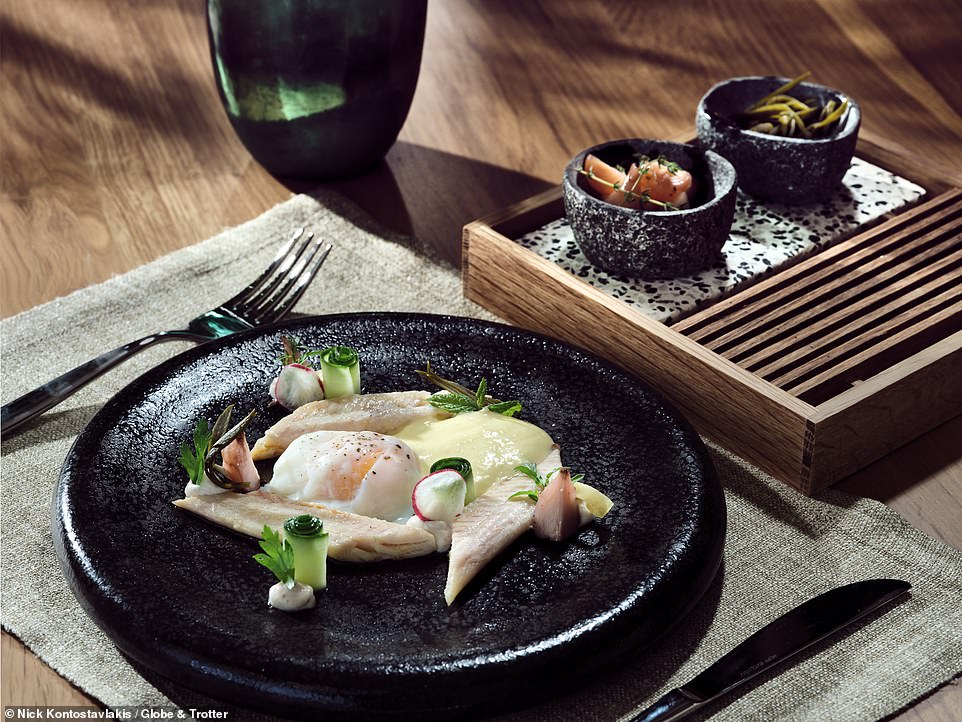 This image shows a dish from the Cretamos al la carte at The Royal Senses. Dishes here include petimezi-glazed pork – a dish with origins that can be traced back to Byzantine times 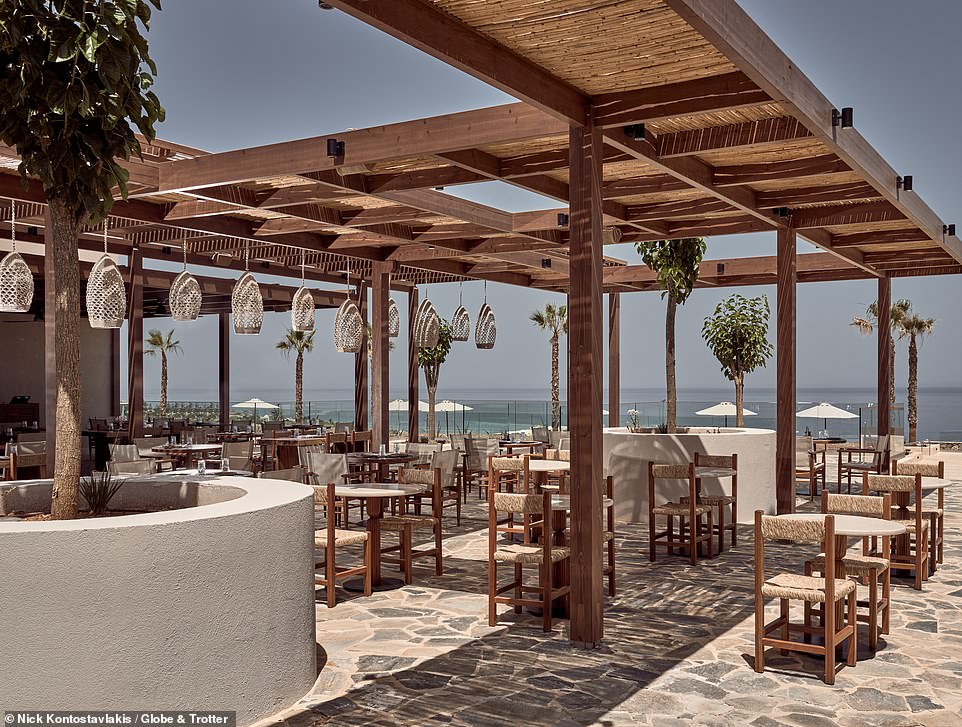 This photograph showcases Platia, the lunch restaurant at The Royal Senses that’s been designed to resemble a Greek village square. The menu features dishes like dakos – Cretan bruschetta – and Cretan pizza with feta 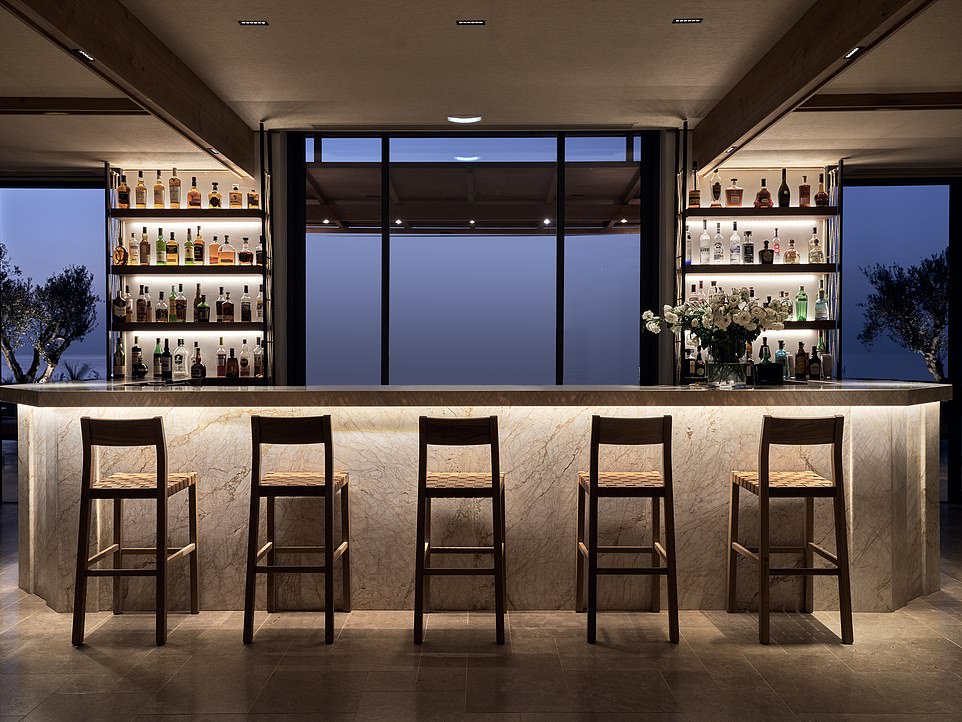 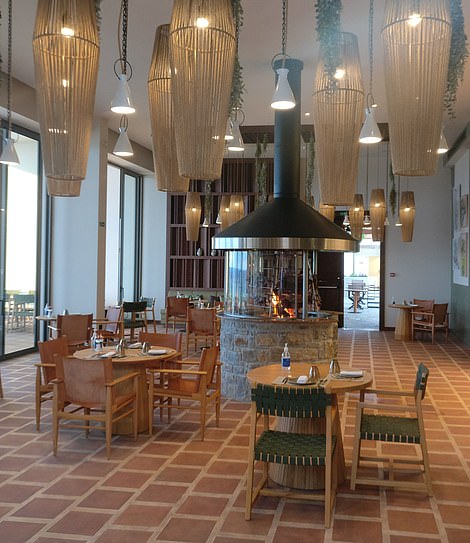 Pictured is the antikristo grill in the centre of the Mitato a la carte restaurant at The Royal Senses. Antikristo cooking involves slow-cooking salted lamb over open flames

Some of the dishes on the menu, like petimezi-glazed pork, date back to Byzantine times. However, the talented chefs Stelios and Moses give them a 21st-century rebirth, with elements like infused oils, savoury popcorns and flavoured crumbs.

I personally can’t resist the slightly more modern beef fillet with activated carbon, pickled apple and parsnip puree that is served in a portion as pleasing as the presentation.

If the thought of being stuck on a hillside puts you off this place, don’t worry. The hotel has a wow-worthy newly renovated sister resort called The Royal Blue that’s less than 300 metres (984ft) away and right on the water’s edge.

Free shuttle buses run between the two hotels every half hour.

Royal Senses guests can make full use of the facilities at Royal Blue, and they should – I certainly do.

The hotel’s statement saltwater pool is worth a visit in itself. It’s lake sized, deep enough to sink a double-decker bus, and you can hear the waves crashing a few feet away as you swim. I swim in here until my fingertips crimp.

The adults-only sea-view bar, with its whitewashed terrace and little garden with wooden swing seats, is another excuse to stop by. I sit here one evening with a cold glass of Cretan Moschato Spinas white wine and watch as the sunset makes the sky blush then blacken.

Pictured is The Royal Blue – sister hotel to The Royal Senses. The hotels have been designed to complement each other but be completely different in terms of looks and style 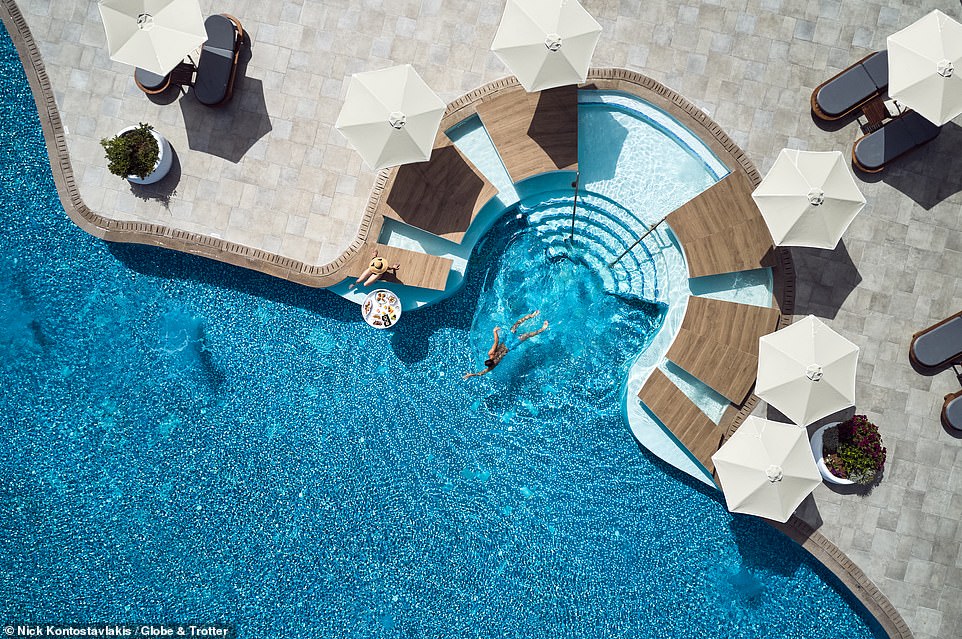 This shot shows the entrance to the huge saltwater pool at The Royal Senses’ stunning sister hotel Royal Blue. The moment you step off the steps, you can’t touch the floor of this pool 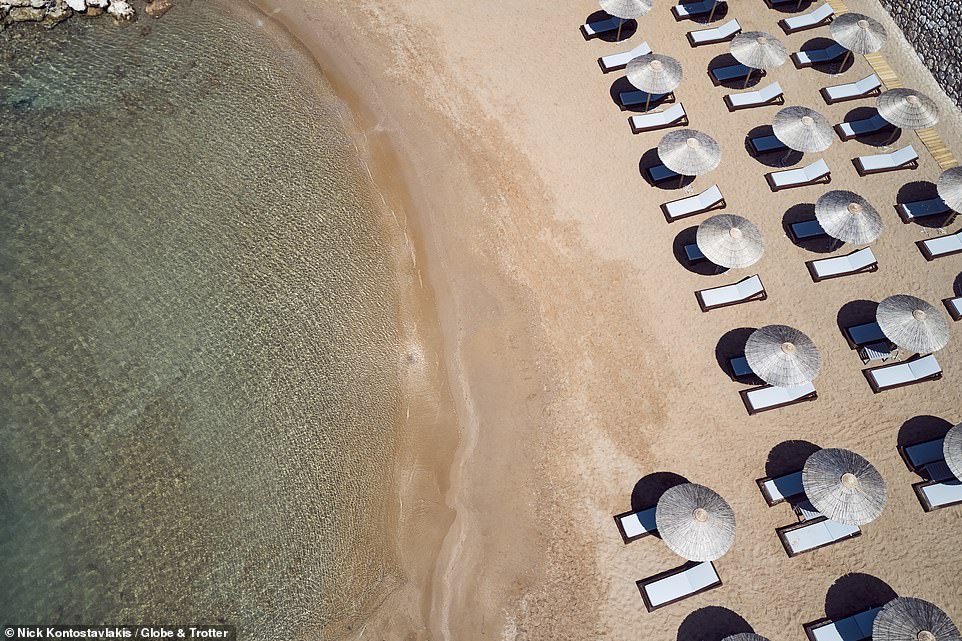 Guests at The Royal Senses can catch the shuttle bus or walk down to The Royal Blue to use the hotel’s private beach (pictured), which is sheltered by an arm of rocks 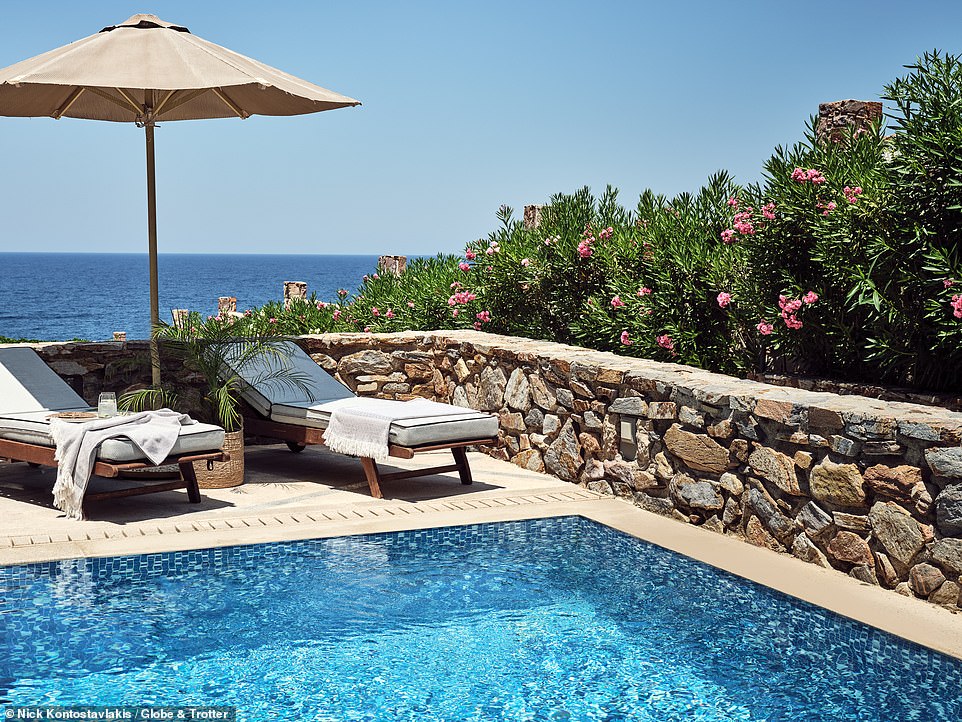 Just like The Royal Senses, the Royal Blue has a selection of stunning private pool rooms (pictured). Some of them look out over the sea

Then there’s the hotel’s beach.

A protective manmade arm of rocks wraps itself around the sand here to make swimming safe and the Bali beds and loungers come with buttons to press for waiter service.

I’m always a bit ginger about pushing buttons like this, worried about looking lazy. There’s no judgement from the staff at Royal Blue, though.

Every member of the team at this hotel has a genuine smile. They are Cretan hospitality personified.

The rooms, with their lullaby-soothing white and pebble colour schemes, are special, too, and I’d recommend booking a twin-centre trip that includes both hotels so you can experience the very intentional yin and yang of the two.

It’s also worth coming down here for an additional spa treatment.

As with The Royal Senses treatment menu, the therapies reflect the hotel’s setting. The hot seashell massage leaves me as floppy as an unmanned marionette.

Either take a 20-minute taxi ride or catch the bus from in front of the Iberostar Creta Marine, a 10-minute walk from The Royal Senses, and you can visit Crete’s third largest city. Explore the Old Town with its leather, linen and ceramics shops and enjoy a drink or dinner on the harbourside.

The snoozy fishing village of Panormo is a short taxi ride or a 40-minute walk downhill and along the coast from The Royal Senses. Amble around the streets, sink your feet into the sun-warmed sand of its two beaches, then pull up a seat in one of the waterside tavernas for a traditional Greek lunch.

The timeline of this traditional inland village can be traced back to the 14th century. Wind your way around its higgledy-piggledy lanes and pop into the olive oil factory. To get here you can catch the ‘Little Train’ from a stop at the bottom of the hill where The Royal Senses is located. Trips run on Mondays, Wednesdays and Saturdays.

Margarites is said to be one of the most significant centres of traditional pottery in Greece and its ceramics centres are open to the public. You can catch the Little Train – mentioned above – here, too. Trips run on Sundays, Tuesdays and Fridays.

The Palace of Knossos

The largest Bronze Age archaeological site in Crete is an hour’s drive east from The Royal Senses Resort & Spa. The ruins here are said to have once been home to the monstrous half-man, half-bull Minotaur.