A Greek man is facing 10 years in jail for kicking a kitten into the sea after he lured it over to the edge of a restaurant’s decking with a piece of fish.

The diner was captured on video playing with two cats, before using the side of his foot to shunt one of them over the edge and into the water.

Footage of the kick sparked outrage in both Greece and abroad, with many calling on the country’s government to act.

The incident took place on Sunday on the Greek island of Evia, with a government minister announcing on Monday afternoon that a man had been arrested. Pictured: Still grabs from a video in which a man was shown kicking a kitten into the sea at a Greek restaurant on Sunday. Officials have said a man has been arrested over the incident

The video, shot under a table and through a number of blue chair legs, opens with the man using the piece of fish to entice the cat towards the edge of the decking.

As a woman is heard laughing in the background, the kitten appears reluctant to get too close to the edge and is shown raising its paw at the fish.

However, the man is able to get the black and white kitten to come closer to him as a second, larger cat comes into view attracted by the prospect of food.

The second cat quickly retreats back through the table legs away from the edge, but the first continues to get close to where the man is trying to direct it.

The man is then seen trying to use one of his feet to nudge the car closer to the drop, and the cat takes a couple of steps forward towards the fish in his hand.

At which point, the man uses the side of his foot to kick the cat off the decking and into the sea as laughter can be heard in the background. 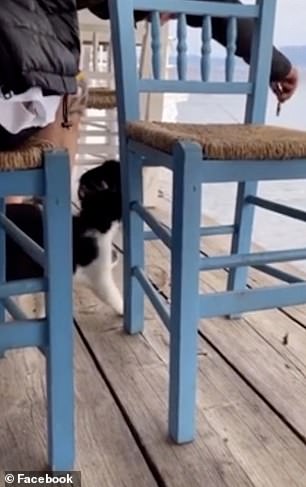 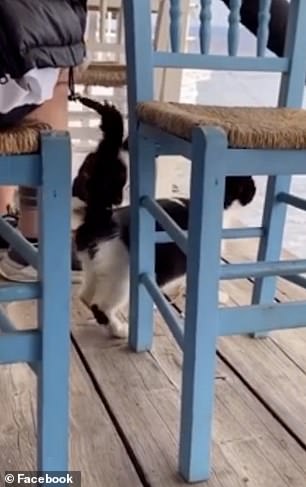 Pictured: The man was shown in the video trying to lure the cat towards the edge of the wooden decking overlooking the sea. A second cat was also seen being tempted by the fish, but knew better than to get too close to the edge

The second cat comes back from underneath the tables, and appears confused as to where the kitten has gone.

The man is then shown trying to lure the second cat over the edge as well, but he drops the fish over the edge. The black and white cat sense trouble, and escapes away from the edge of the deck and runs back underneath the chairs.

Local reports said that the two cats belonged to the restaurant owner, who told reporters that the cat survived being kicked into the water. It was reportedly saved from the sea and taken to a nearby vet.

The owner said that he would help police track down the man who kicked the kitten. 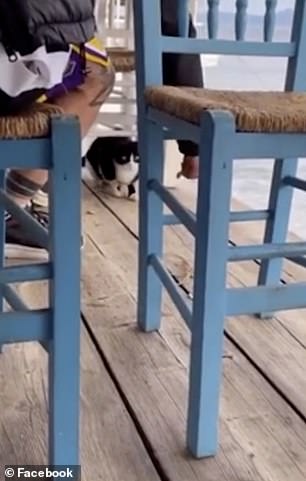 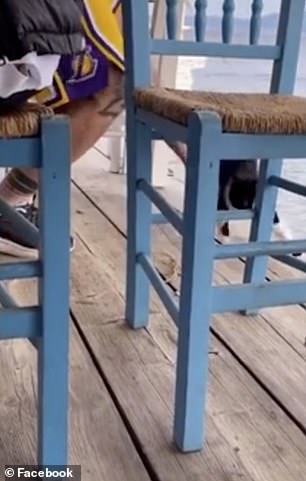 The cat was first reluctant to get too close to the edge, but was too tempted by the fish. Once the cat was on the edge of the decking, the man used the side of his foot to kick the cat into the sea 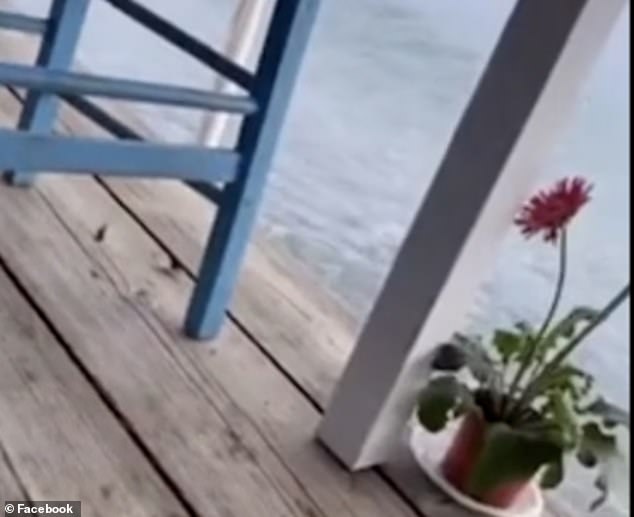 Pictured: A still grab from the video showing where the cat was kicked into the sea

Greek Minister for Citizen Protection, or Police Minister, Takis Theodorikakos wrote on Facebook that a man had been arrested.

‘A little while ago, the Greek Police arrested a person who kicked and threw a kitten into the sea,’ he wrote on Monday.

‘Violence against animals is unacceptable. The government has passed a strict law to protect animals from abuse which is now in place, but in any case it is a matter of humanity and culture.

‘I am deeply saddened by those who mistreat animals and those who tolerate it. I heartily congratulate those who raised the issue. The reason now belongs to the Greek justice,’ the minister added.

In recent years, Greece has tightened its animal protection laws, meaning that if found guilty of animal cruelty the man could face up to 10 years in prison and a maximum fine of €50,000.