Greek shipping magnate Spiros Milonas and his wife Antonia (pictured above) have been married for almost two decades. They most recently have been estranged due to marital problems

Manhattan socialite Antonia Kotovos Milonas, 64, failed to pay her 2017 taxes, and as a result, has had a lien placed on her West 57th Street condo, according to records viewed by the New York Post.

Even though the pair run the real estate company, Axios, together, Milonas won’t take on his wife’s IRS debt, billionaire businessman John Catsimatidis told the Post.

‘It is not Sprios’s responsibility,’ said Catsimatidis, who is a friend of the husband’s.

Catsimatidis, owner of the Gristedes grocery store chain and a radio show host, called himself ‘Spiros’ financial officer,’ and professed he had the power to say whether the wife gets her tax bill paid. 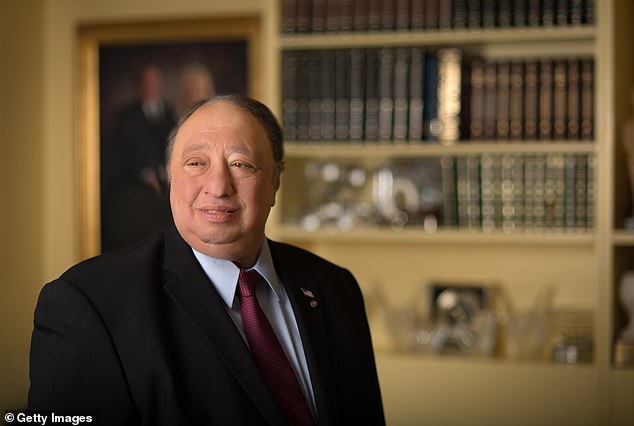 Billionaire businessman John Catsimatidis (above) owns the Gristedes grocery store chain and is  a radio show host. He called himself ‘Spiros’ financial officer,’ and professed he had the power to say whether his wife gets her tax bill paid

‘I have not authorized Spiros’ people to pay her IRS debts. It’s her responsibility, according to the marriage contract,’ he told the Post.

‘They do file separate tax returns, and his taxes are up to date,’ Catsimatidis added.

The couple have been married for almost two decades, but have been estranged more recently.

The husband, who is believed to be in declining health, is worth $500 million, according to the Post.

The maritial woes between husband and wife were last aired in 2017, when a lawsuit was filed on his behalf alleging she was trying to get him to change their prenuptial agreement so she could get her hands on $8.4 million before he dies.

She was accused in the suit of using a variety of methods, including ‘threats, abuse and undue influence’ to make her then 88-year-old husband hand over the money, which rightfully belonged to her husband’s daughters from his first marriage and his grandchildren.

The husband, however, had the suit dropped after he claimed a lawyer filed it without his authorization.