When it comes to the current awards season, Green Book is certainly emerging as a serious contender. It has already won three Golden Globes – including best supporting actor for Mahershala Ali – is in contention for four Baftas at next weekend’s star-festooned ceremony and has no fewer than five Oscar nominations to its name, including a highly coveted nod for best picture.

Thankfully, it also turns out to be a watchable and thoroughly enjoyable sort of film, of a type you weren’t quite sure they made any more.

Yes, it’s sentimental and more than a tad simplistic, suggesting as it almost does that all a cultured black man needed to survive in the racist American Deep South of the early Sixties was a white Italian thug with a big right hook. 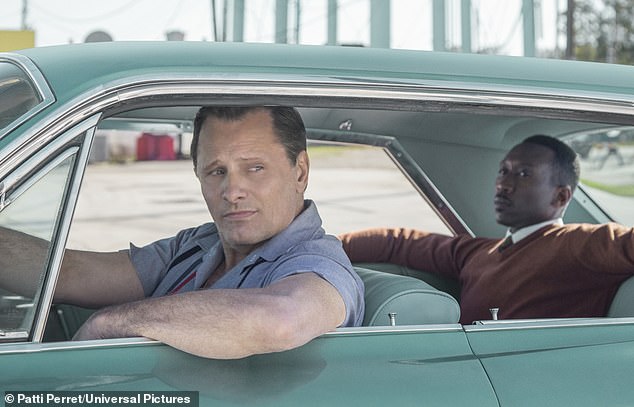 But it’s a better and more important film than that makes it sound, as you’d expect from a production that numbers the prominent black actress Octavia Spencer – star of The Help and Hidden Figures – among its executive producers.

The fact that the story is told primarily from the perspective of said white Italian thug and that the film is directed and co-written by the white film-maker Peter Farrelly doesn’t seem to have bothered her, so I don’t think it should bother us over-much either.

Race and racial discrimination, however, are absolutely central to a story set in the early Sixties and based loosely on true events, which saw an Italian nightclub bouncer known as Tony Lip hired to drive the brilliant black pianist Don Shirley on a two-month tour of the American Midwest before taking a hard and potentially dangerous left turn into Southern states, as yet untroubled by ‘civil rights’.

Thank goodness the pair have The Green Book, a travel guide of safe places for black visitors to sleep and eat, to guide them. 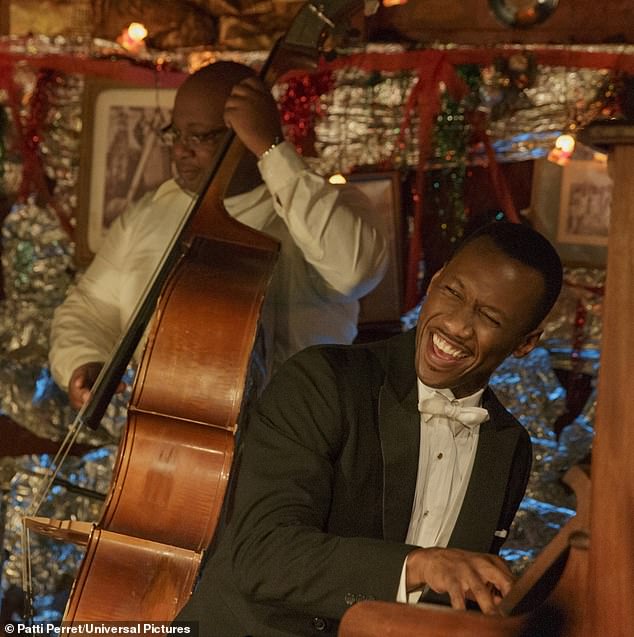 Loosely based on a true story, the early Sixties-set film tells of Don Shirley (Ali, above) who enlists an Italian thug (Mortensen) to protect him when he goes on tour in the Deep South

There’s no doubt the film takes a while to get going, struggling to emerge from the cinematic clichés of tough Italian Americans who always live in the Bronx, wear their vests to eat dinner and seem to survive on an endless diet of meatballs. Just like Mama used to make, of course.

Only the endemic racism makes us sit up and take notice, with Lip’s extended family referring to two black workers who come to relay his kitchen floor as ‘egg plants’ and Lip tossing the glasses they drank from straight into the bin. You can tell that In The Heat Of The Night, the multiple Oscar-winning drama of racial tensions starring Sidney Poitier and Rod Steiger, won’t be made for another six years.

We only get properly under way when our unlikely couple finally hit the road, with the refined and cultured Shirley (Ali) tucked comfortably under a travel blanket on the back seat while the chain-smoking, fast-food-gobbling, endlessly talking Lip (the New York-born Viggo Mortensen) drives reluctantly up front. 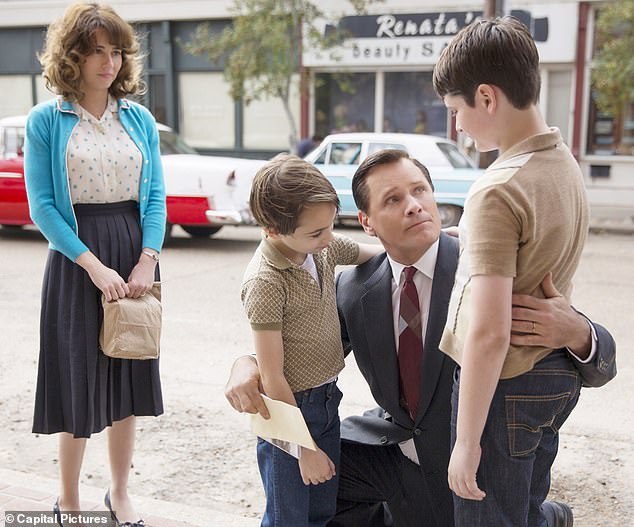 It may be sentimental and more than a tad simplistic but the endemic racism really makes you sit up and take notice. Above: Mortensen with Linda Cardellini, Gavin Foley & Hudson Galloway

The macho white man can’t quite believe that he’s a chauffeur for a black musician but, hey, the money’s good, the nightclub is closed for renovations and he wants to look after his lovely wife, Dolores (Linda Cardellini), and their children. Whaddaya goin’ to do?

Anyone who feels a film in which two men initially clash angry heads only to learn from each other and unexpectedly arrive at a position of mutual respect and friendship coming on is absolutely right. And if that makes it sound like Driving Miss Daisy, only with roles and races reversed… well, it is a bit.

Lip quickly learns to appreciate Shirley’s musical genius (a virtuoso blend of jazz and classical) and his way with words, while Shirley soon discovers that Lip is a good man to have on your side in a tight corner. Of which there are soon several.

The real Tony Lip went on to play Italian-American mobsters in moves Donnie Brasco and GoodFellas, and TV hit The Sopranos .

Farrelly, of course, is best known for crude but popular comedies such as There’s Something About Mary, Shallow Hal and Dumb And Dumber, and, while it’s good to see him graduating to grown-up dramas, a slight lack of subtlety definitely remains. Characters are drawn in broad brush strokes while individual scenes – a racist confrontation here, a rebuff there – flirt perilously close to genre cliché.

But it does all work, with Mortensen and Ali both deserving of the multiple nominations they have picked up, and the film having a popular appeal that doesn’t always march hand-in-hand with awards success.

Ali, who won the Oscar for best supporting actor for Moonlight a couple of years ago, is particularly good, and it will be interesting to see if his performance – or indeed the film – sparks any sort of revival in Shirley’s genre-defying and currently rather out-of-fashion music, which Lip at one point describes to his wife as ‘like Liberace, only better’. Oscar Peterson meets Michel Legrand might be closer to the mark, but it’s definitely a lot of notes.

The last ten minutes arrive layered in enough snow and Yuletide sentimentality to deter the sort of cerebral audience put off by such simplistic things. But not me – I love a film where the world seems a slightly better place by the end.

How To Train Your Dragon: The Hidden World (PG)

Nine years after the original, the How To Train Your Dragon trilogy comes to a sweet but underwhelming close with The Hidden World, which sees the Viking stronghold of Berk forced into an evacuation and its leader, Hiccup, discovering that Toothless isn’t the only Night Fury dragon in the world. Turns out there’s a pretty female one too, though all is not what it seems. 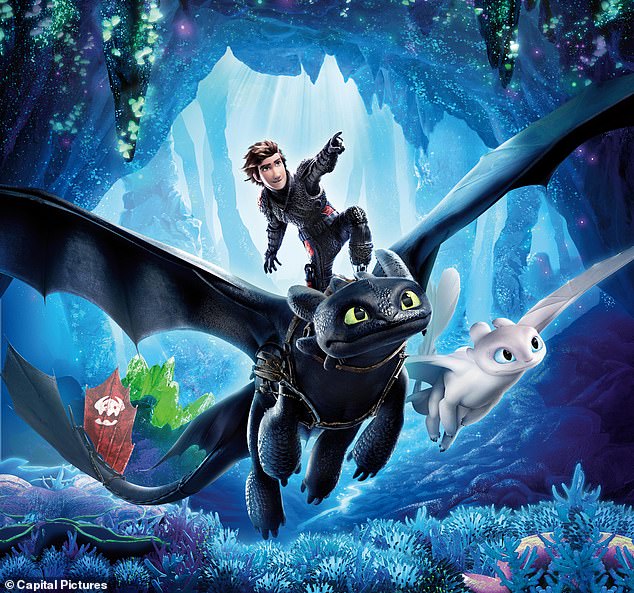 Gorgeous animation and plenty of fun scenes help bring the How To Train Your Dragon trilogy to a sweet, if underwhelming, close with latest instalment The Hidden World

I’ve always found the voices a tad too American-sounding, but the colour-drenched animation here is gorgeous, the courtship rituals of dragons provide silly fun and F Murray Abraham is effective as the wicked dragon-slayer, Grimmel the Grisly.

It may be up for three Baftas and a similar number of Oscars, but it’s quite hard to see what the fuss is all about, with a plot that never quite grabs and both Melissa McCarthy and Richard E Grant playing notably unlikeable characters.

McCarthy is Lee Israel, a broke, cat-loving writer who, back in the New York of 1991, embarks on a new career as a literary forger, selling letters supposedly written by the likes of Noël Coward and Dorothy Parker to book dealers, aided by her unreliable friend and drinking buddy, Jack Hock, played by a particularly ebullient Grant. There is some pathos and poignancy here but the pace is unhelpfully slow.

It’s barely a month since five Polish girls died in a fire in a real-life escape room, which you might think would have caused the distributors of this tedious teen-thriller about a group of young people locked in a series of deadly escape rooms to pause for thought before going ahead with its release. But apparently not.

Crucible Of The Vampire (15)

Spooky old country house, an organ in the hallway, pretty new visitor, strange goings on… this low-budget offering has all the hallmarks of classic British horror but is let down by its amateurish execution.