What’s banned? People want clear disclosures of what sectors are screened in and out when committing money to green investments

People are most keen to know what will be screened out and in when risking their money on green investments, new research shows.

A list of excluded and included sectors is ranked as the most useful information by private investors, followed by expert fund ratings and measures of environmental and social impact.

People want ‘clear and factual’ disclosures, according to the Association of Investment Companies, which released its findings as City regulators unveiled plans to crack down on ‘greenwashing’ by the finance industry.

Negative and positive screening: Investors want to know what sectors and types of companies ESG funds will favour

Today, the Financial Conduct Authority proposed slapping restrictions on how terms like ‘ESG’ – which stands for environment, social and governance – ‘green’ and ‘sustainable’ can be used.

‘There has been growth in the number of investment products marketed as “green” or making wider sustainability claims,’ says the watchdog.

‘Exaggerated, misleading or unsubstantiated claims about ESG credentials damage confidence in these products. The FCA wants to ensure that consumers and firms can trust that products have the sustainability characteristics they claim to have.’

The AIC investor survey found that when people analyse green investments, they regard support for UN goals and principles as among the least useful information, while size of the ESG fund team came bottom.

The industry body also carried out more in-depth interviews with some investors, who revealed a strong preference for greater consistency and independent expertise when green funds are benchmarked against each other.

How useful are green investing labels? 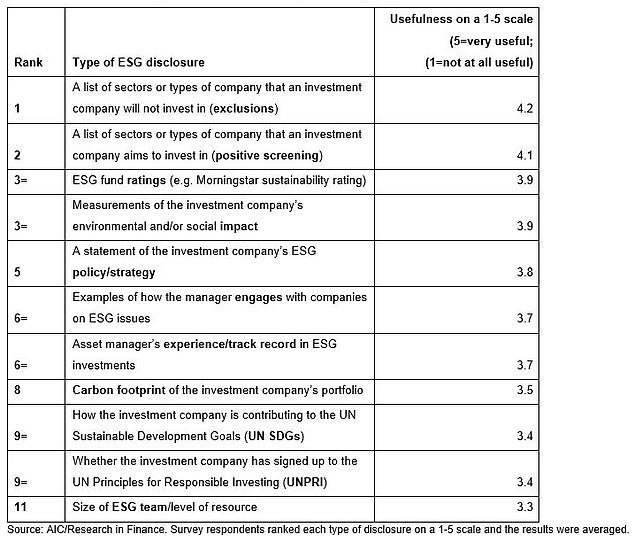 The AIC findings included the following:

– Some 55 per cent of private investors agreed with the statement ‘I think exclusion isn’t the answer and it is always better to engage with companies and try to influence them’.

– People are more sceptical and pessimistic about ESG investing than a year ago – probably reflecting relatively poor fund performance in the first half of 2022 – with 60 per cent taking such issues into consideration, down from 65 per cent in 2021.

– Among those who don’t consider ESG issues when investing, 55 per cent are unconvinced by claims from fund managers, up from 27 per cent last year.

– Across the board, 58 per cent of investors do not trust ESG claims by funds, up from 48 per cent last year.

– When it comes to a breakdown of the terms included in ‘ESG’, the environment is rated as most important by private investors, at 3.5 on a scale of one to five, while governance is rated second at 3.2 and social issues third at 3.1.

– Asked to rank the importance of specific issues, 60 per cent said climate change, 56 per cent transparency and disclosure, 55 per cent pollution, 46 per cent preventing waste and 41 per cent human rights.

– Some 53 per cent would fully exclude investments involving child labour from their portfolios, 43 per cent pornography, 40 per cent oppressive or controversial government regimes, 34 per cent firearms, 32 per cent animal welfare violations, 32 per cent tobacco and 13 per cent fossil fuels.

– Some 14 per cent think ESG investing is likely be lower risk than other investments, down from 20 per cent last year, compared with 29 per cent who reckon it is higher risk, up from 23 per cent.

The AIC surveyed more than 400 private investors who were mixed in age, gender, investable assets and region, but all had some money to invest and owned at least one investment product.

All selected some of their own investments, though just over a quarter also used a financial adviser or wealth manager.

‘However, there’s a preference for the clear and factual over disclosures that may seem more abstract or subjective.’

What do investors say?

The AIC highlighted the following investor comments from its survey.

On green labelling: ‘For organic products, there is the Soil Association so you know that if you buy a product that has got the association mark, that actually their organic standards are really stringent and you know you have got a good product. With something like ESG investing, would there be an equivalent?’

Engaging with firms versus divesting: ‘I believe in giving people a chance but they need to show that they are making efforts to make changes…There is a step where you say enough is enough and then that stock should be sold.’

What should be excluded from ESG investments: ‘I would certainly see what is in the top 10 holdings because there are some things that I just wouldn’t invest in. Some of those would be gambling companies and, to some extent, probably the big oil companies and the fossil fuel companies I would tend to avoid as well.’