Green light for Wimbledon to treble in size after £65m deal

For the last decade Wimbledon has felt like it has been bursting out of its skin, but it will breathe easier over the next decade after the addition of a bumper plot of new land.

Members of the neighbouring Wimbledon Park Golf Club voted on Thursday night to accept an improved £65million bid from the iconic tennis establishment for its 73 acre site that can be added to the 42 already in use for the UK’s biggest annual sports event.

In the process the 750 golfers – who include the likes of TV presenters Ant and Dec – will enjoy a windfall of nearly £86,000 each for allowing the iconic tennis event to nearly triple in size. 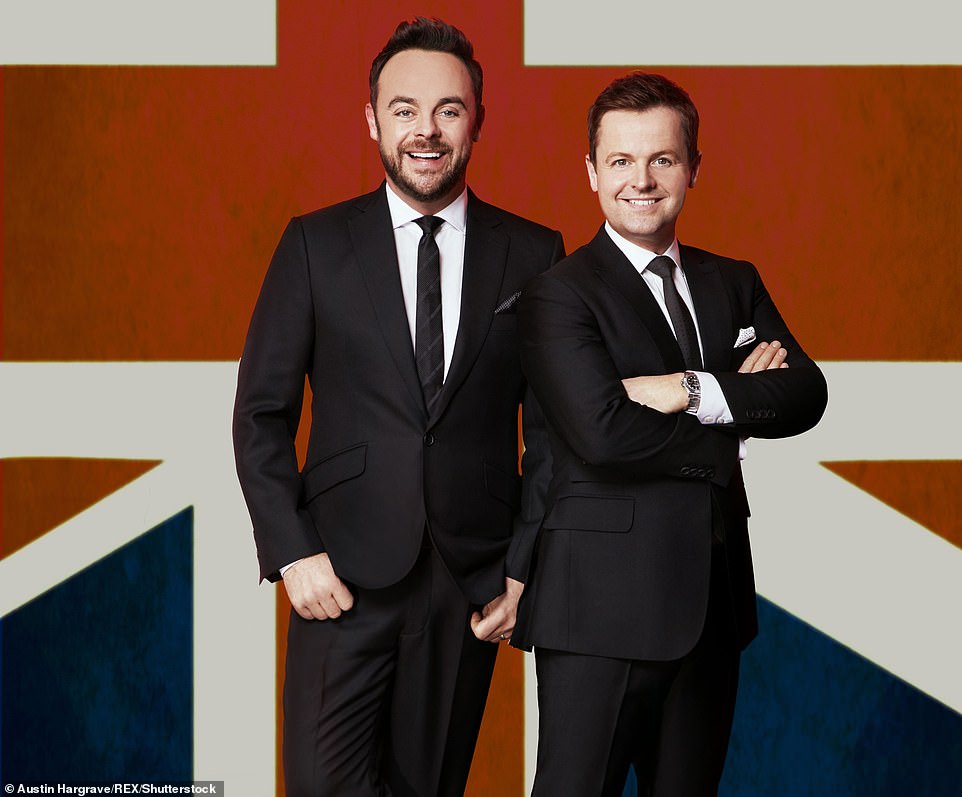 The effects on The Championships will be profound, and eventually the purchase is expected to lead to the addition of new stadia, the qualifying rounds being held on site, an increase to the current capacity of 40,000 and a reconfiguration of the traditional queueing arrangements.

The All England Club already owned the lease on the course and would, in any event, have taken the land back in 2041. What they have done is paid a premium to do that early, although 18-hole golf will be played there until the end of 2021.

Wimbledon Chairman Philip Brook said: ‘The decision is a hugely significant moment for the AELTC and The Championships. We have achieved what we set out to do many months ago in having certainty in our planning for the future. 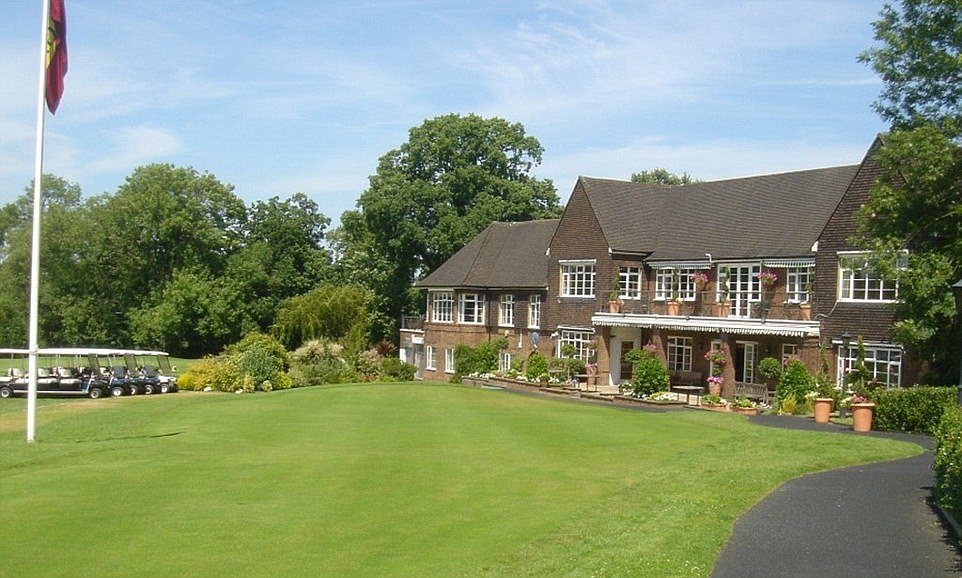 ‘We have been open in our long-term ambition to move the Qualifying Competition from its current home in Roehampton to the AELTC Grounds as part of our mission to continue to maintain the position of The Championships as the pinnacle of the sport. Furthermore, we have the ambition to open the land up to increased public use in the future.’

Thursday night’s vote in favour, by 82.2% of the membership with 75% required, was the culmination of strenuous activity all year, which first required a change in the golf club’s constitution.

The key factor was allowing all members to benefit equally from the sale, even those who have only joined recently.

Wimbledon’s primary motivation for snapping up the land comes from its desire to keep up with other Grand Slams, whose progress has put its pre-eminence in the sport under threat.

The US and Australian Opens have significantly expanded their facilities over the last decade and even the French Open, which was in danger of lagging behind the other three, has overcome major planning hurdles and is now significantly developing Roland Garros.

While the All England Club has made no secret of wanting to bring the qualifying rounds ‘in house’ from nearby Roehampton – where they have been held non-stop since 1947 – another pressing concern has been the lack of large arenas after the Centre Court and Court One.

The shortage sees Number Two as the third biggest with just 4,000 seats. Spectator demand often exceeds supply of seat availability on the outside courts, notably when British players are in action in the first week.

The long-term desire is to build numerous courts on the golf course, which could potentially see temporary stands put up to expand capacity.

Now the 73 acre site that can be added to the 42 already in use for Wimbledon, the UK’s biggest annual sports event 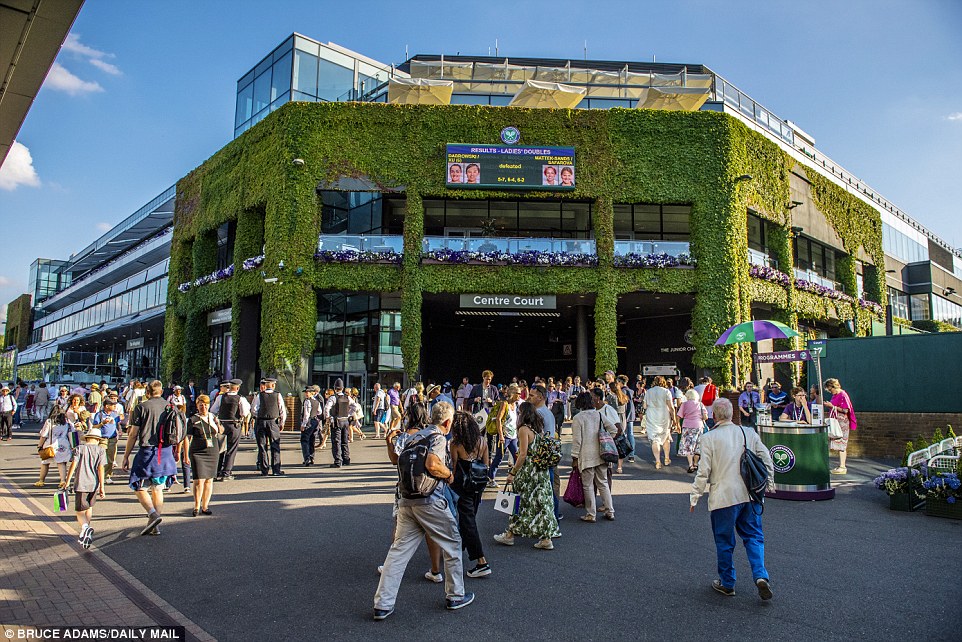 It will not, however, be entirely straightforward due to severe planning restrictions on much of the new land, especially at its southern end. Many of the trees, which date back to the original work done by landscape architect Capability Brown, are protected.

That is why local fears of any huge commercial development are unfounded, and the Club has assured that there will be nothing out of character with the event.

What could happen in time is an alteration to the famous queue which grows every year, and in a letter to golf club members this summer All England Chairman Philip Brook mentioned that Wimbledon would seek to establish ‘a greatly enhanced arrival operation’ to the event.

All this is very much in the medium to long term, because the celebrated venue in SW19 already has plenty of expansion on its plate already.

No sooner are the finishing touches being put to the new roof on Court One than they are beginning another major project of knocking down the indoor courts on the opposite side from the golf club. These will be replaced by a new complex including six new indoor courts, six outdoors and an underground car park. 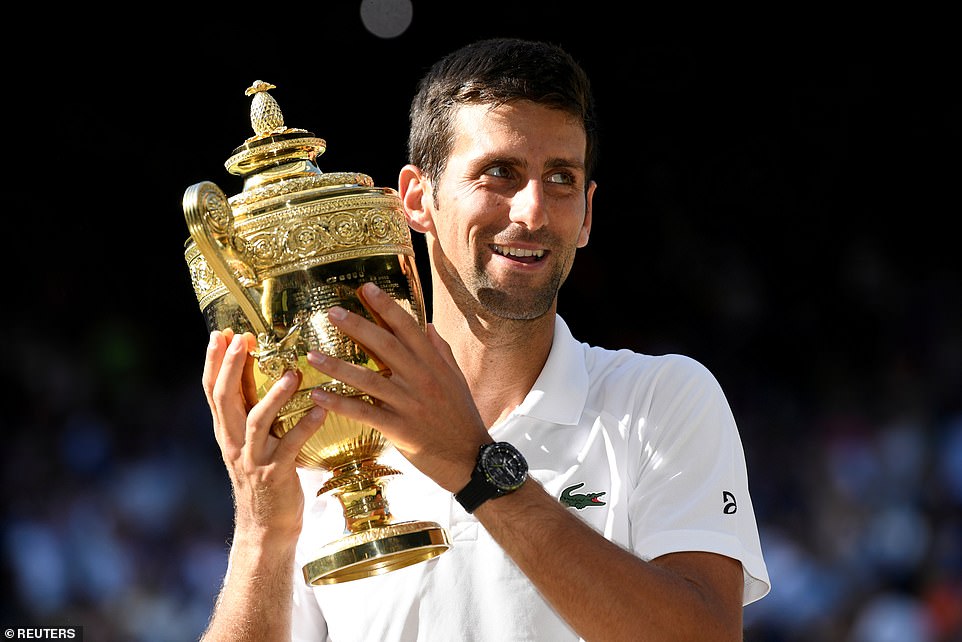 The men’s singles title at Wimbledon was won this year by Novak Djokovic, who beat Kevin Anderson in the final

The two existing projects are likely to have cost well over £150 million before the acquisition of the new land, and that could stretch even the well-upholstered finances of the All England Club.

This is especially so when the coming departure of the likes of Roger Federer, Serena Williams and Andy Murray from the game could mean the boom in debenture sales of the past ten years – which have helped finance recent development – may be at an end.

A tightening of finances could, in turn, have a knock-on effect to the annual surplus handed annually to British tennis to nurture the game in this country. This sum, usually more than £30 million, has been trimmed back already over the past two decades, and the tournament suffered this year through having no homegrown singles contender making the second week.

These future conundrums will have to be worked through by a new person at the helm, with Brook stepping down in 2019.

At present the senior hierarchy of the club are said to be concerned that there is no obvious successor, and consideration is being given to the idea of an interim appointment being made while someone else is groomed to take the position long term.