The Green Party launched its general election manifesto today with a formal pledge to spend £100 billion a year on tackling climate change.

The Greens want to reduce carbon emissions in the UK to net zero by 2030 – a much more ambitious target than other political parties and one which comes with a hefty price tag.

The overwhelming majority of the annual £100 billion climate fund would be borrowed.

Meanwhile, the pro-Remain party is also promising to introduce legislation in Parliament to force a second Brexit referendum.

Speaking at the party’s manifesto launch event at the London Wetlands Centre, co-leader Jonathan Bartley promised that their so-called ‘Green New Deal’ would be the most ambitious in the world.

He said the issue of climate change had been overshadowed by financial crises and that those responsible had been ‘let off the hook’.

‘Back then our economy itself warned us that things had to change. Now our very planet is ringing the alarm.

‘Hitting snooze for another 15 years simply isn’t an option. This is a different magnitude to the financial crash.

‘You can’t double down on business as usual, pray to the markets and expect the climate emergency to magically go into reverse.’

Under the party’s plans, it would borrow £91 billion a year for the next decade for capital expenditure on tackling climate change.

A further £9 billion would be funded annually through increasing corporation tax to 24 per cent. The business tax on profits is currently set at 19 per cent.

‘This is the most ambitious green new deal proposed anywhere in the world,’ he said. 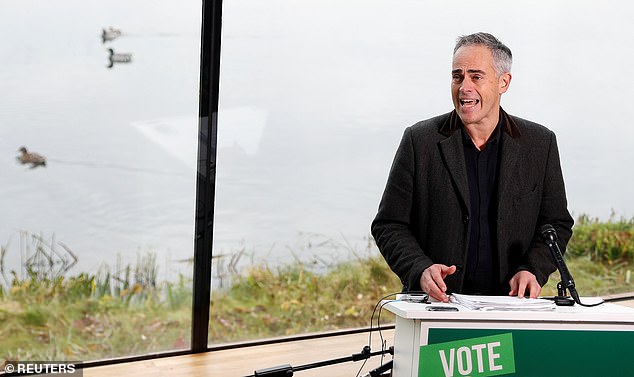 ‘While the other parties are trying to catch up, we’re still racing ahead, reaching new horizons.’

The party argues that borrowing cash on such a scale is justified due to the looming climate crisis.

The Greens also vowed to introduce a draft law in Parliament so that a second referendum on the UK’s divorce from the EU can be held.

Ms Womack claimed that voting Green was the strongest way to ensure that Britain was kept in Europe.

‘We are offering the only way forward from the wreckage of the 2016 referendum,’ she said.