Earth’s stratosphere is shrinking due to greenhouse gas emissions, and it could have a devastating effect on satellite operations and GPS, experts have warned.

A study by Charles University in Prague found the region of the atmosphere from 12 to 40 miles above the Earth has been shrinking by 328ft per decade.

The team predict that over the next 60 years, under current climate change predictions, the upper part of the stratosphere could shrink by four per cent.

This would take another 3,200ft from the top of the stratosphere – enough to put some satellites at risk due to less air friction for them to operate in.

Since the 1980s, when they began observing the extent of the stratosphere, it has shrunk by about 1,300ft, but it was likely shrinking before this, they said.

This is because, before the 1980s, when Earth observing and high orbiting satellites were launched, there was not enough data from so high in the atmosphere.

According to the team behind the new discovery, if the disruption continues then it could impact satellite trajectories and their measurements.

LAYERS OF THE ATMOSPHERE

There is a potential impact on the accuracy of global positioning systems such as GP and Galileo, as well as the transmission of radio signals across the planet.

‘The stratospheric thickness has the potential to become a new indicator of climate change,’ the authors of the study explained.

This is due to the fact it is a very clear and obvious alteration to the fragile equilibrium of our planet.

‘This drives the conclusion that there is a need to obtain better and more comprehensive observations of the upper part of our atmosphere to assess the contraction of the Stratosphere. This is going to be a challenge in the future.’

Rising emissions of greenhouse gases from human activity have already led to the warming of the troposphere – where humans live and weather happens.

It has also led to the cooling of the stratosphere, which may be linked to the discovery that it has been shrinking for decades.

‘As a thermodynamic consequence, the troposphere has expanded and the rise of the tropopause, the boundary between the troposphere and stratosphere, has been suggested as one of the most robust fingerprints of anthropogenic climate change.’

Conversely, at altitudes above 34 miles, in a region known as the mesosphere and thermosphere, modelling indicates they are getting closer to the Earth.

‘The layer in between, the stratosphere, has not been studied extensively with respect to changes of its global structure,’ they explained.

‘We show that this atmospheric layer has contracted substantially over the last decades, and that the main driver for this are increasing concentrations of greenhouse gas emissions.’

Using data from climate models they found that this trend will continue up to 2080 based on the most likely climate change outcomes. 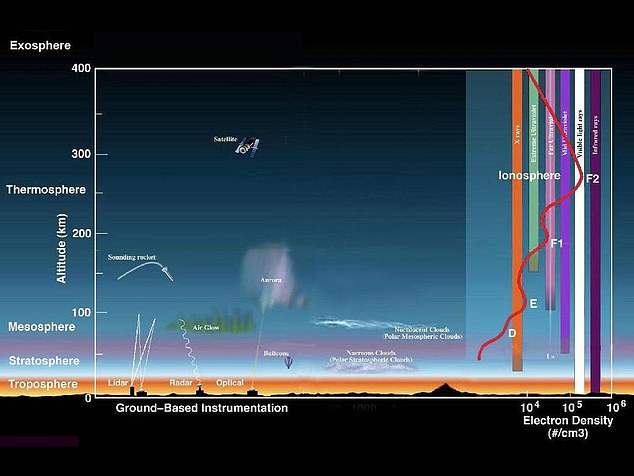 This would take another 3,200ft from the top of the stratosphere, enough to put some satellites at risk due to less air friction for them to operate in

Professor of atmospheric science at Reading University, Paul Williams, who was not involved in this study, said the research appears to demonstrate that greenhouse gases, not ozone depletion, was the primary cause of the shrinking.

‘This finding is significant, because it means the shrinking effect will continue long after the ozone layer recovers,’ he told The Times.

‘If (and it is a big if) the shrinking stratosphere were to lower all the atmospheric layers above it, low-altitude satellites would experience reduced air resistance, which could modify their trajectories,’ he said. 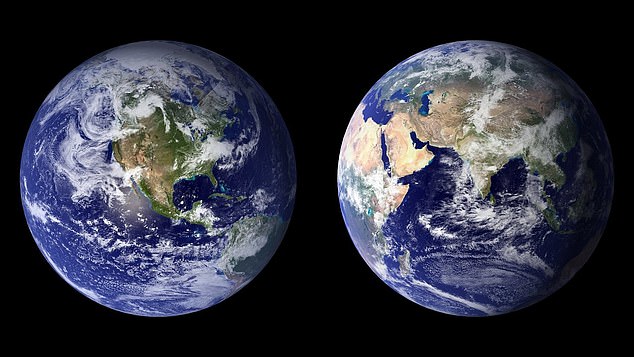 Professor of atmospheric science at Reading University, Paul Williams, who was not involved in this study, said the research appears to demonstrate that greenhouse gases, not ozone depletion, was the primary cause of the shrinking

Adding that ‘any change to the altitude of the electrically charged layer could alter the transmission of radio waves.’

The stratosphere has also been cooling since the 1980s, study authors explained, which many predicted was due to holes in the ozone layer.

‘Our results indicate that the widely recognised cooling of the stratosphere while important, is not the sole driver of the reduced stratospheric extent, with complex radiative and chemical feedbacks likely at play,’ study authors wrote.

The findings have been accepted for publication in the journal Environmental Research Letters.