The Greens have directed members to raise the banned West Papuan flag on December 1, breaking decades of political silence on a hot-button political issue.

A message sent to supporters including state and federal MPs urged them to raise the Morningstar to mark their independence day.

‘The Australian Greens Global Issues Group (GIG) is asking you for your assistance to bring attention to the on-going oppression of West Papuans by Indonesian police and military,’ the request said.

A West Papuan supporter waves the Morningstar flag from the safety of neighbouring Papua New Guinea. The flag is banned in Indonesia and those who wave it are jailed

‘The people of West Papua have been resisting violent and oppressive Indonesian occupation for 55 years now … Since Indonesian rule, hundreds of men and women have been detained as political prisoners.’

Australia’s two major political parties have given bipartisan support to Indonesia’s annexation of the territory since its takeover was recognised by the UN in 1969.

For decades all major political parties have been silent over the repression of West Papuan activists, including the 1998 Biak Massacre where Indonesian soldiers shot unarmed villagers gathered around a Morningstar flag raised over a water tower. 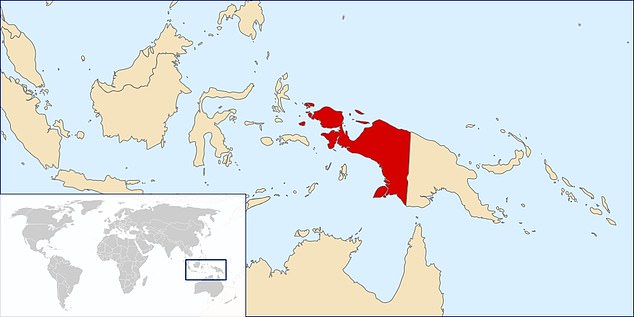 The western half of New Guinea, formerly a Dutch colony, was annexed by Indonesia in 1969

Survivors were tortured and killed, and their bodies dumped at sea, according to the findings of a citizen’s tribunal held in Sydney and presided over by former NSW attorney-general John Dowd.

A report published by Yale Law School in 2004 found Indonesia had killed roughly one seventh of the 1961 population either directly or through starvation and sickness from forced relocations.

Indonesia is highly sensitive over its claim to the disputed region, which is rich in gold and resources. 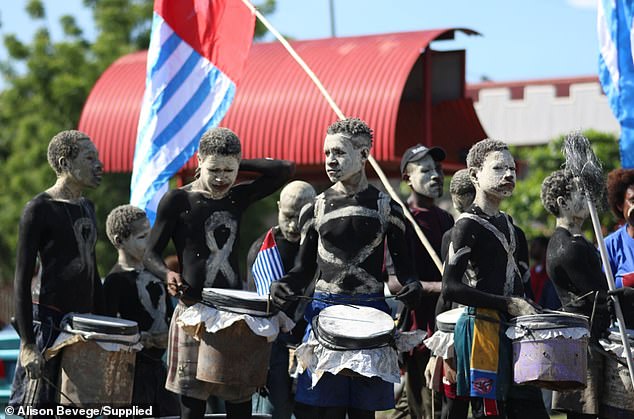 Drummers from Biak wave the Morningstar from the safety of Papua New Guinea. The Greens have called on their supporters in Australia to raise the banned flag in solidarity on December 1

More than a million Indonesian settlers have been shipped in since 1969 under a program called Transmigrassi, almost outnumbering the indigenous population, according to research by Sydney University’s West Papua Project.

Indonesia has banned the Morningstar flag, symbol of West Papuan independence, and jails those who fly it for up to 20 years.

The majority Muslim nation is already irritated over Australia’s proposal to move the Australian embassy in Israel to Jerusalem, and the December 1 flag raising is likely to enrage it further. 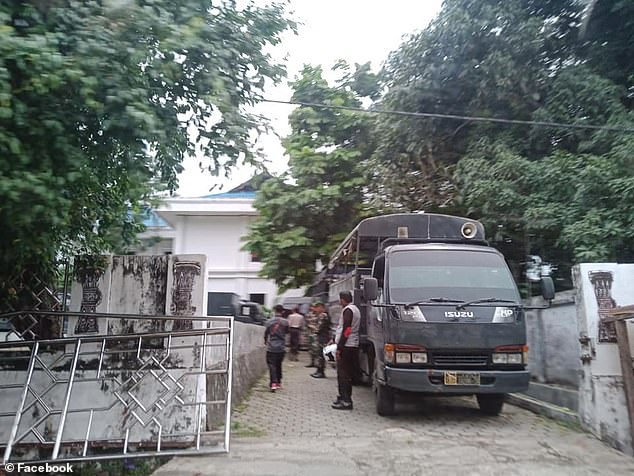 More than 100 members of the West Papua National Committee (KNPB), a group campaigning for an independence vote, were arrested by Indonesian police on Monday

Indonesia is not Australia’s largest trading partner but it is the most important neighbouring military power and sits strategically on Australia’s northern border.

Australia’s military is dwarfed by Indonesia which has almost a million active personnel compared to Australia’s 80,000, and more equipment, according to comparison website globalfirepower.com. 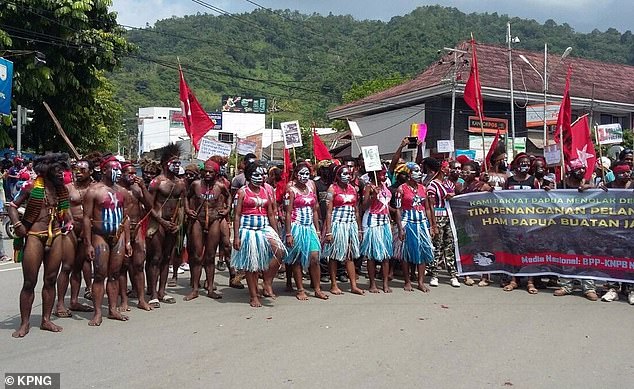 Papua New Guinea’s military is not able to defend its border, which cuts New Guinea in half from north to south. It relies instead on Australia’s security guarantee.

Further unrest was reported from the disputed region on Monday when Indonesian police arrested 107 West Papuan activists from an organisation called the West Papua National Committee (KNPB) which is campaigning for a referendum on independence, the Jakarta Post reported.

The Papuans were arrested after a meeting in the regional capital, Jayapura, which was called Hollandia before the Indonesian takeover.

Australia has signed an agreement with Indonesia called the Lombok Treaty promising not to allow ‘separatists’ to use Australian territory to campaign. 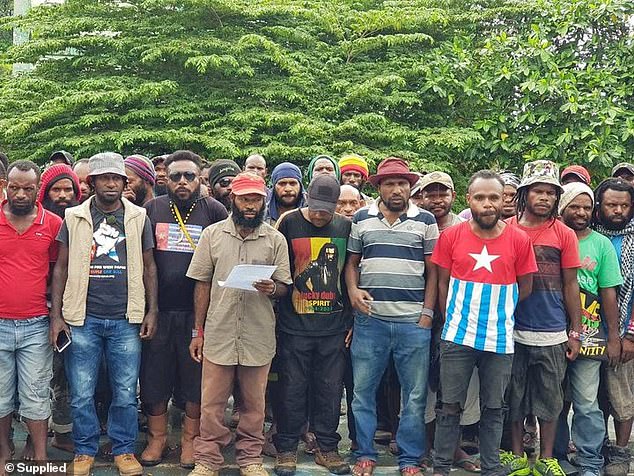 Executive members of the West Papua National Committee (KNPB) at their second congress, Jayapura, October 2018. The group is campaigning for a vote on independence

When asked about the December 1 flag-raising, the Department of Foreign Affairs and Trade said the Australian Government respects the right of people to speak publicly and protest lawfully about political issues.

‘Australia has long recognised Indonesia’s sovereignty over the Papua provinces. This is a bipartisan position in Australia, underlined by the 2006 Lombok Treaty between Australia and Indonesia. Indonesian sovereignty is also widely recognised by the international community,’ a spokesperson from DFAT who declined to be named said in an emailed response.

Daily Mail Australia has contacted the Indonesian embassy for a response via email. 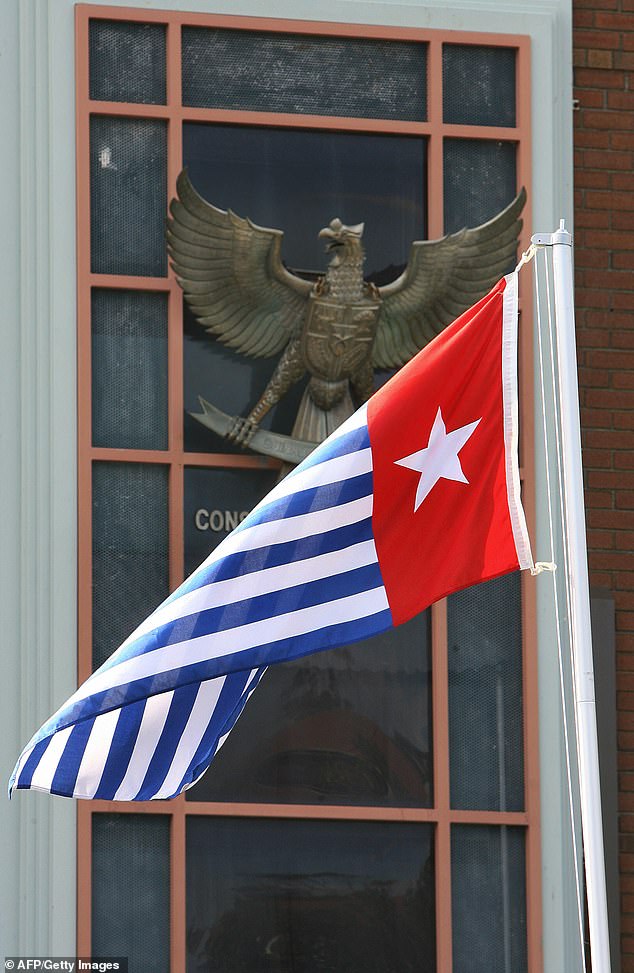 A West Papuan flag outside the Indonesian Consulate in Sydney, held by an unseen protester.