Gregg Berhalter deflects question on USA soccer future after World Cup exit to Holland, with polarizing coach set to be out of contract at the end of tournament: ‘In the next couple of weeks, I’ll think about what’s next’

USA coach Gregg Berhalter declined to shed light on his future with the team after their 3-1 loss to Holland, with the prospect of him coaching the team in the 2026 World Cup apparently in question.

The US, Canada and Mexico will joint-host the next edition of the tournament in less than four years, and US Soccer will want to make sure they have the right man in charge after a decent showing in Qatar.

But the contracts of Berhalter and his staff only run through the end of this tournament, and he didn’t sound sure Saturday if he’d continue on with the national team.

‘I’ve only been focused on the World Cup, achieving things with this group,’ he said after the game when asked about his future.

‘In the next couple of weeks, I’ll clear my head and think about what’s next.’

The US’ exit from the tournament has led to many supporters calling for Berhalter’s ouster.

The 49-year-old frustrated the fanbase with his some of his personnel decisions over the course of the tournament, including his sparse use of Gio Reyna and unwillingness to play Tim Weah as a No. 9.

Relatedly, his decision not to bring strikers Jordan Pefok or Ricardo Pepi to the tournament was viewed as a curious one by some. 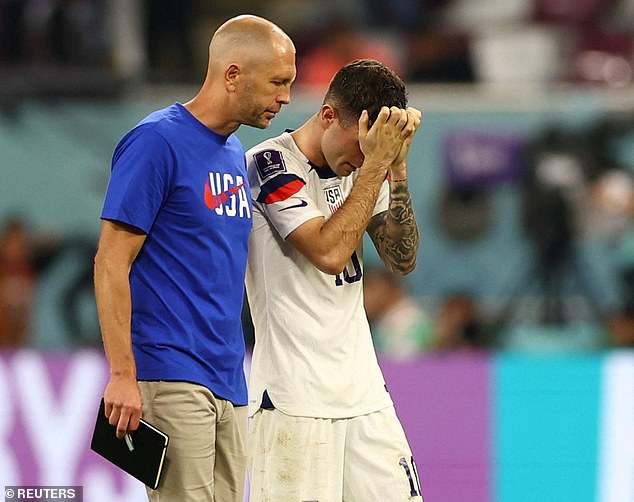 Berhalter consoled Christian Pulisic after the match, where the talisman assisted the lone goal

And while the US (three goals in four games) had scoring issues at this tournament, it wasn’t all bad for Berhalter.

The team looked extremely organized defensively in the early goings, not conceding once from open play until Saturday’s knockout game vs. Holland.

US Soccer may decide to bring in a fresh face for the next World Cup cycle, but Berhalter’s work in revamping the team deserves recognition.

After being hired by the team in December 2018 following their failure to qualify for that year’s World Cup, he would go on to lead the team to Gold Cup and Nations League titles.

He also helped recruit dual-nationals like Sergino Dest and Yunus Musah, who have both become vital members of the team.