Gregory Porter on the only gift his father left him: his voice

Gregory Porter considers his life ‘completely unreal’. The Grammy award-winning jazz musician has gone from abject poverty to multimillionaire stardom, performing alongside Adele at Glastonbury and in front of the Queen. He has fronted documentaries on the BBC including Gregory Porter’s Popular Voices, took part in the 70th anniversary VE celebration concert in 2015, and his albums Liquid Spirit, Take Me To The Alley and Nat King Cole & Me all reached the UK top ten.

We meet in the lounge of a London hotel. He is 6ft 3in and bear-like, wearing his trademark black Kangol hat with two flaps that cover his cheeks and chin that were scarred in a childhood accident he refuses to ever speak about. He is beaming from beneath his hat, a big, generous smile, and he sings intermittently as he talks. ‘I’ll have tea,’ he says to the waiter in a treacle-thick, buttery American accent. ‘I think you call it ‘workman tea’.

Gregory Porter with his son Demyan in California. The 48-year-old singer is set to release his latest album, All Rise, in April

You mean builder’s, I say, and he chuckles and sings slowly: ‘Builder’s tea for you and me.’ It’s a voice that makes even that line seem rather magical.

The 48-year-old singer is here to talk about his latest album, All Rise, his sixth studio album. He has to think about travelling around Europe, promoting the album, living in hotels and working out his diary to ensure he also spends time with his Russian wife, Victoria, and seven-year-old son, Demyan. It is a long way from a childhood spent sharing a room with seven siblings, waking up in the night to see Ku Klux Klan crucifixes burning outside his house, or to find his mother, Ruth, clearing up broken glass after beer bottles filled with urine had been thrown through the window of their tiny house in Bakersfield, California.

‘Success for my family was getting through the day, getting a job, finding a place to lay your head,’ he says. ‘I wanted to play [American] football, then I became a chef because I never thought I would make a living as a musician. And now I do and that still seems unreal to me.’

He wipes at his brow under the heavy woollen hat. ‘Sometimes I wake up and lie staring at the ceiling of a hotel room halfway across the world from where I grew up and I think to myself, How on earth did you get here?’

Porter’s mother was a preacher who kept her family together through hard work and sheer determination. He is the seventh of his mother’s eight children. Their cramped house was not just home to his family but to a series of strays, waifs, hopeless alcoholics and down-and-outs his mother gave shelter to. His eldest sister is, in fact, the child of a drug addict who could not care for her daughter so Ruth adopted her as her own. His father, Rufus, walked out on the family when Gregory was a toddler, returning only occasionally, rarely keeping promises to be there for Christmases or birthdays and staying only for the briefest of hours.

The story of Porter’s success has been, thus far, of a man whose life’s goal was to honour his mother. He was 21 when she died of breast cancer and on her death bed she exhorted her son to sing. ‘It is the best thing you do, don’t worry about being poor – just follow your passion,’ she told him.

Porter says: ‘For a year I couldn’t sing or even listen to music because it was my mother’s love of Nat King Cole and beautiful voices that made me sing and I was too full of grief, my voice felt broken.’

But then he gave up his life as a city planner and moved to New York, singing in small clubs in the evenings and working as a chef during the day. Success did not come easily. Porter was in his late 30s when he recorded his first two albums and achieved only modest success, but his third, Liquid Spirit, began a quiet storm on radio and then became one of the most streamed records of 2013, going on to win him a Grammy at the age of 40.

Porter is one of the rare few who have crossed over from jazz into mainstream without losing his credibility and gaining fans from Stevie Wonder to Van Morrison along the way.

Success also gave him stability, as he met his wife 15 years ago in a Moscow nightclub while touring in Russia. They started as friends and when she came to visit New York a year later, he acted as her tour guide. By the end of her trip, he didn’t want her to leave and the next time she visited, he proposed.

‘Success was never something I imagined would happen. And when it did, all I could think about was my mother,’ he says. ‘All I talked about was my mother and what an amazing woman she was and how she was the one who pushed me to make this happen.’ He looks down at his cup of tea and speaks slowly. ‘Recently I started to think about that hole in my life: my father. I had become a father myself and it changes you. It made me wonder, “What man was my father?” I tried to set aside the resentment and think about him, because you don’t really come to terms with who you are until all the pieces are together.’ His new album, All Rise, contains several songs about his father.

Porter tries to make sure he is very much present in his own son’s life, balancing weeks away touring with weeks spent at home, speaking to his son every day and trying to get the balance right between providing for his future and being physically there with him.

My father said, “There’s a lot of good singers out there. I don’t think you should do that.” That killed me

Porter always knew his love of music came from his mother but that his voice came from his father. ‘My only gift,’ he says. ‘The only thing I have of his. Nothing else. Not a single thing, not even a spoon.’ When he was 20 and at college, he went to see a therapist who asked him about his father and he realised he knew nothing about him. Within a year he had tracked him down but he was dying of bone cancer.

‘I went to see him in hospital; he was wired up to all these tubes full of blood. At the time, the one thing in my life that gave me comfort was my voice and at college people told me I could sing. I decided to sing for my father. I thought if he says a single word of encouragement, I will think seriously about really performing. I sang him a song and when I stopped, I closed my eyes hoping he would say something good. I asked him if he thought I could make something of my voice and he said, “I don’t know. There’s a lot of good singers out there. I don’t think you should do that.” He was a complicated, tough man and that killed me back then. He also said to me, “I will forget more than you will ever learn.”’

He smiles ruefully and shrugs. ‘It was months later at his funeral I found out that he sang. That he had a wonderful voice. I never knew until people at the funeral were talking about his beautiful voice and how he was so charismatic and would write beautiful verses. And I think about him now and I wonder if there were reasons he left us, reasons for his disappointment and anger. I try to forgive and I think maybe I need to find out more about my father. I need to have something more in my life of my father, some more understanding of him because that’s the way you find peace.’ 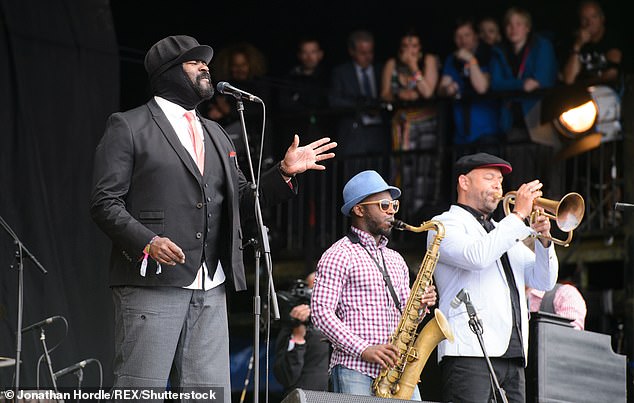 The story of Porter’s success has been, thus far, of a man whose life’s goal was to honour his mother. He was 21 when she died of breast cancer and on her death bed she exhorted her son to sing. ‘It is the best thing you do, don’t worry about being poor – just follow your passion,’ she told him

I ask him where he finds peace and he gives a broad smile. ‘Oh, any place. Jazz is about freedom and when I sing I am at peace. I have peace in my heart. I also have peace in my home. I decided to go back to the place I grew up so I still live in Bakersfield.

‘Back then it was an all-white town and they didn’t appreciate people of my colour. Things have changed a bit. I went to a school reunion and I had a guy who apologised to me for the way he treated me.’ He laughs. ‘It took me by surprise because he wasn’t one of the kids who said and did the bad things, this was a guy who I actually thought of as a friend. But I wanted to stay because I wanted my son to know where I grew up and now I have a big house, all my family still come to stay and there are days where I make waffles with my son and tell him stories that are part of my story.’ He smiles. ‘But there’s a long way to go before the story ends.’

Gregory Porter’s new single ‘Revival’ is out now. The album ‘All Rise’ is out on April 17. Porter is at the Cheltenham Jazz Festival on May 5 then tours the UK from May 9 to May 26