A road rage incident caught on camera saw a man jumping on the hood of a motorist’s car as he drove away.

Patricio Rios became infuriated after a man driving a white SUV in the town of Providencia, in the Chilean capital of Santiago, refused to speak to him after allegedly repeatedly running into his rear bumper on Monday afternoon.

Video of the incident shared on Twitter by Gabriel Leon shows Rios arguing with the driver and then jumping on to the SUV.

Patricio Rios (left) tries to detain the driver of an SUV who allegedly rear-ended his car. Rios shockingly jumped on top of the moving vehicle’s hood before the car stopped  a block later 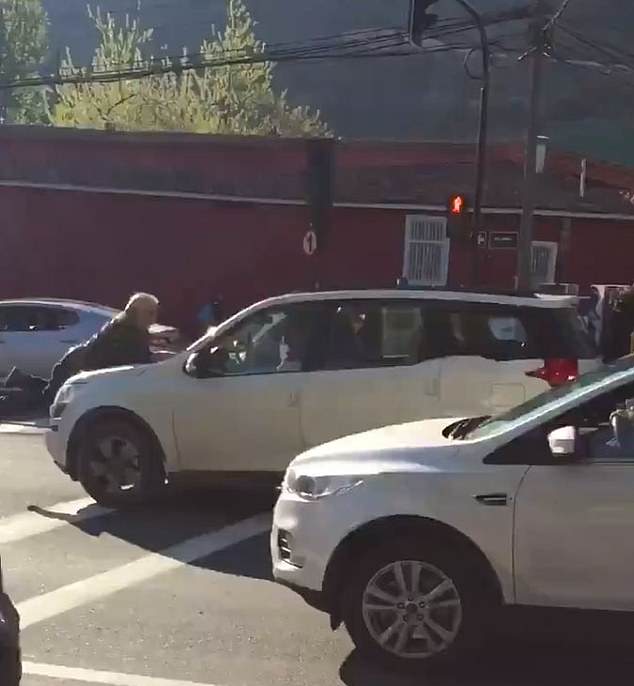 According to Las Últimas Noticias, Rios told local station TVN 24 he was approaching the driver to confront him about him scratching his car.

‘I told him, “What’s wrong with you? Look your car is glued to mine. You are striking my car, you are scratching it,”‘ Rios recalled.

‘He didn’t say anything. Nothing. He did not lower the window. I banged the window.’

As soon as the light turned green, the driver attempted to leave the scene with Rios on the hood.

‘He continued to advance. It gets to a point where I had to jump on top of the hood. He drives off with me and takes me across the street.’ 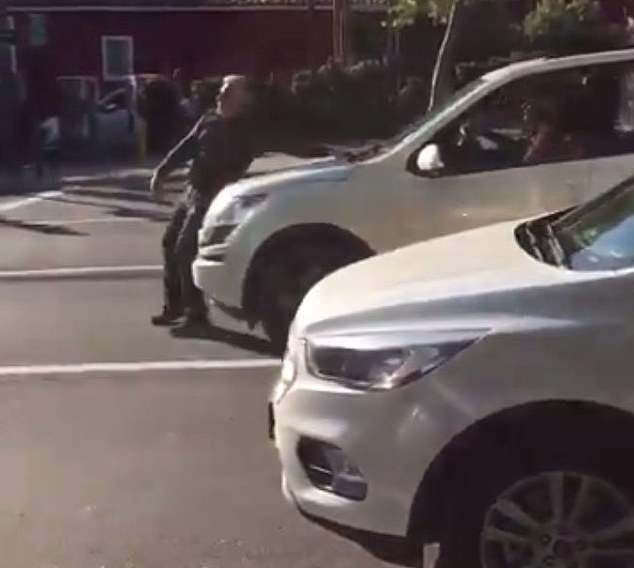 At the next intersection Rios said the man got out and then punched him.

For some reason, a local business owner originally thought it was just a prank.

It turned out to be much worse.

‘I thought it was a joke or a recording for a humorous television show,’ Arturo Ferrera told Las Últimas Noticias.

‘A while later the grey-haired man passes by walking. He was sweating a lot.’

Police authorities said Monday they were trying to locate the driver as part of their investigation.