That was on porpoise! 50ft grey whale sprays British driver in the face using its blowhole while she is taking a selfie

Hilarious footage shows a British diver’s selfie interrupted by a 50-foot grey whale spaying her in the face.

Founder of diving company Girls That Scuba, Sarah Richard, from Hastings, was in Lopez Matteo, Mexico, when she met this giant whale.

The video shows her leaning out of a boat to stroke the whale while she holds a selfie stick filming the incredible interaction.

All of a sudden the whale sprays water out of its blowhole directly into her face.

She laughs in delight and continues to pet the 36-tonne whale.

Sarah Richard was filming herself petting a grey whale in Lopez Matteo, Mexico, when it sprayed water from its blowhole directly into her face 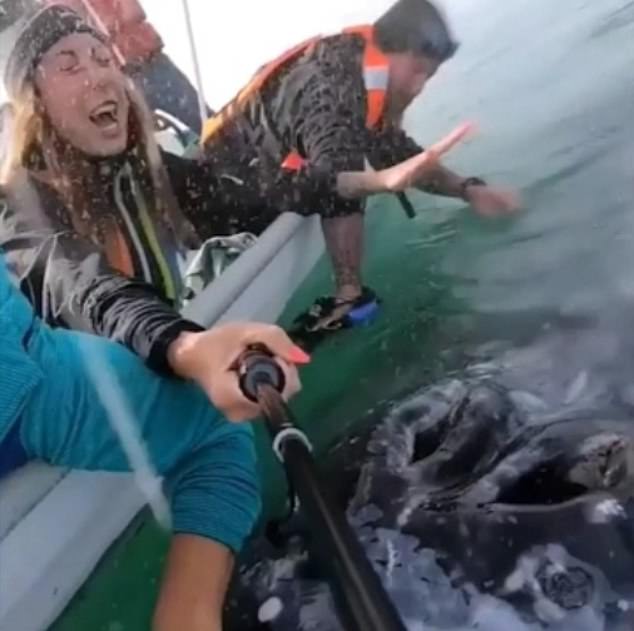 Grey whales have two blowholes on the top of their heads which they use to breathe when they are at the ocean’s surface.

They also use them to to expel water after they have stayed underwater for a maximum of 30 minutes.

Grey whales are often thought of as friendly because of their curious nature with humans.

Sarah said: ‘You may wonder why we’re touching the grey whale.

‘As divers and ocean lovers, we know the damaging effects of touching marine life,’

‘This is a very intimate and unique experience that the whales have actually created for themselves by coming up to the boats and seeking out human interaction.

‘Studies have proven that the whales actually like to be rubbed.

‘Studies have also proven that no infection is passed through human touch unlike with many other marine animals which is why we don’t touch those.’

There are an estimated 200,000 grey whales in the Pacific Ocean after the species was removed from the endangered species list in 1995.

Sarah said:  ‘This was a once in a lifetime experience.

‘I feel humbled to have witnessed this wild animal in its natural environment without the presence of threat or abuse. 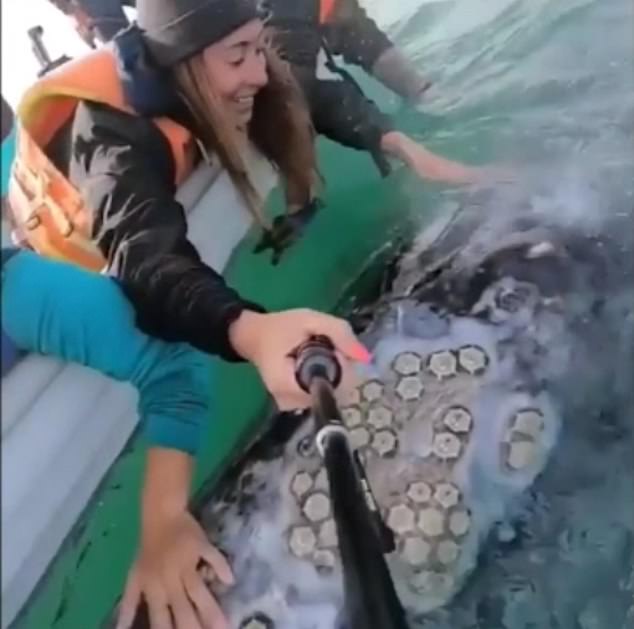 ‘In the months of March to April in Lopez Matteo grey whales come to the lagoons to raise their new-born calves – showing them how to dive and survive before they make their journey back to the cold waters of Alaska.

‘Grey whales have the longest mammal migration route in history as they cover up to fourteen-thousand miles.

‘I’ve been diving for eleven years and I love how unpredictable the ocean is.

‘It’s so freeing to be engulfed in it knowing how much beautiful life it holds.’

‘My company, Girls That Scuba, works with locals to collaborate on eco-tourism expeditions to educate people on conservation.’