A grieving diner has slammed a Michelin-starred pub dubbed the ‘UK’s best’ for not giving him a refund after he couldn’t make his £660 reservation because his father died.

Martin O’Grady handed over the money as a pre-payment for a birthday meal at the award-winning Fordwich Arms near Canterbury, Kent, which was last year named the UK’s best pub at the GQ Magazine Food and Drink Awards.

But four days before the bash on New Year’s Eve, his father had a serious accident abroad and a family member attempted to change the reservation, which was for a table of six.

However, the request was refused, as was a full refund, and on the day of the planned meal, Mr O’Grady’s father died.

He took to Facebook to share his disappointment, saying: ‘We are utterly disgusted by this experience, not to mention £660 worse off, and just feel compelled to share this horrifying story with anyone ever considering making a reservation at this establishment.

‘There are no words.’

In response to the public post, Fordwich Arms head chef Dan Smith said he was ‘sorry to hear of Mr O’Grady’s loss’.

But he told how a pre-payment was taken because a lot of ‘premium expensive ingredients’ had been purchased specially for the night.

He also spoke of having to cover the wages of 16 staff members brought in to provide the ‘best experience service’, adding: ‘This means that margins are very tight as always in restaurants.’

But the response has further angered Mr O’Grady.

He said: ‘Obviously they are feeling the heat from all the negative attention this has drawn.

‘They are ”sorry for my loss”? They didn’t communicate that to me. 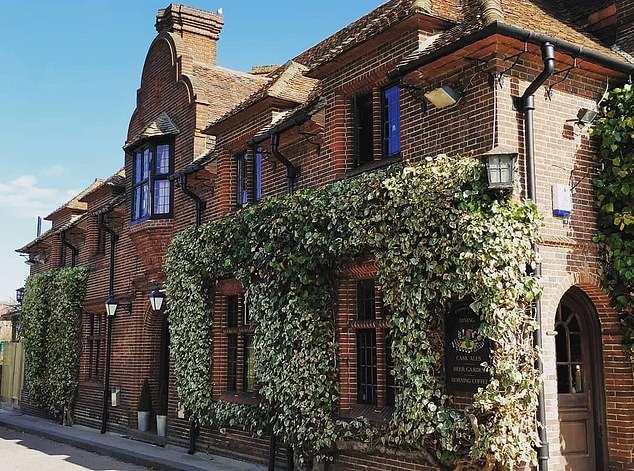 The award-winning Fordwich Arms near Canterbury, Kent, which was last year named the UK’s best pub

‘It seems that all the negative comments and criticism has pressurised them into commenting. Arrogance at best.

‘Their rationale is just about economics. The human aspect of this seems entirely lost on these people.’

Mr O’Grady reiterated he had not sought a refund from the pub, and merely wanted to change the date of the booking given his father’s accident and grave condition.

He said: ‘We were simply requesting a goodwill gesture to allow us to change our reservation to a later date once I had a chance to return to the UK.

‘When asked how management view such extenuating circumstances the manager and owners neither cared nor wanted to hear anything about it.

Mr Smith said Mr O’Grady was told tickets for the New Year’s Eve dinner were non-refundable, but said they could be transferred to another person.

He explained: ‘The first contact we had with this booking was a phone call on Saturday, December 28, in which we were informed that one of the party’s relatives was unwell.

‘Once we had heard the news our manager immediately phoned the two tables on the waiting list. However, at the late stage they had already made plans elsewhere.

‘Unfortunately, due to the late stage we were unable to fill this particular table. The manager also phoned them on the Monday, which was his day off, to inform them we had not yet been able to sell the tickets and to see if they had any luck.

‘We also informed them that we would be happy to refund the two tickets of the couple whose father was unwell or put it towards drinks had the other four wished to attend the booking.

‘However, we were informed that none of the party of friends would be attending the booking.

‘The reason we charge a pre-payment for these events is that all the food is bought in especially for the menus we offer, which allows us to purchase exactly what we are going to use in the evening.

‘With it being New Year’s Eve, this particular menu utilised a lot of premium expensive ingredients which were purchased specifically for the event and ensures that no food is wasted.

‘On this evening we also had 16 members of staff to ensure we offered the best service we possibly could. Again the cost of the ticket price to cover the large staff costs for the evening.

‘As a small independent restaurant in the current financial climate, it is vital we take steps like these to take pre-payments to protect our business.

‘We have a high number of staff to ensure we provide the best experience possible. However this means that margins are very tight as always in restaurants.’