The weeping widow of a man stabbed to death by a schizophrenic in front of his teenage son told yesterday how her family had lost their ‘defender, guide and mentor’.

Darren Pencille was jailed for life last night after a petty row on a commuter train saw him launch a frenzied attack on IT consultant Lee Pomeroy, who was on a day out with his young boy.

Astonishingly, Pencille was deemed by a doctor to pose no ‘risk to himself or others’ just 24 hours before he launched the brutal stabbing in January.

Mr Pomeroy, 51, was knifed 18 times in less than 30 seconds by 36-year-old cannabis addict Pencille, in what was described as a ‘truly senseless’ killing following a row over a blocked aisle on a train from Guildford to London Waterloo.

Mr Pomeroy’s widow Svetlana wept as she told the Old Bailey that her husband’s murder was a ‘senseless loss of life’, made worse because it was in front of their son 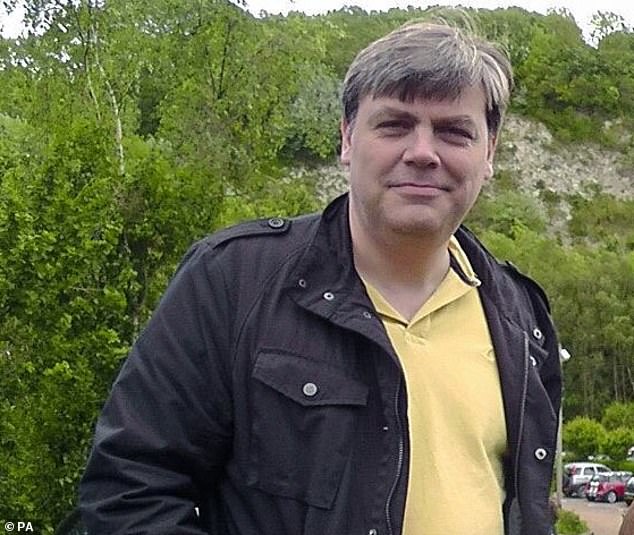 Yesterday, as Pencille was convicted of murder and jailed for a minimum term of 28 years, mental health experts were facing questions about why the disturbed career criminal was allowed to roam free despite an appalling history of violence and psychotic behaviour.

The day before the attack, his psychiatrist had assessed him as being ‘normal’ and ‘relaxed’ even, posing ‘no concerns of risk to himself or to others’.

Mr Pomeroy’s widow Svetlana wept as she told the Old Bailey that her husband’s murder was a ‘senseless loss of life’, made worse because it was in front of their son. In a heart-breaking victim impact statement, Mrs Pomeroy said their lives ‘changed for ever’ the day her husband’s life was ‘cut short in such an unnecessary and cruel way’.

‘Lee Pomeroy should have celebrated his 52nd birthday the day after he died,’ she said. ‘We had cards and presents for him which he never got to see.

‘Life has become empty. He was his (my son’s) defender, guide and mentor – a guiding light forever extinguished.

‘To compound the situation he was with his father when he died, and we have to eventually deal with that as well. I am in tears as this statement is being written because my heart is broken.’ 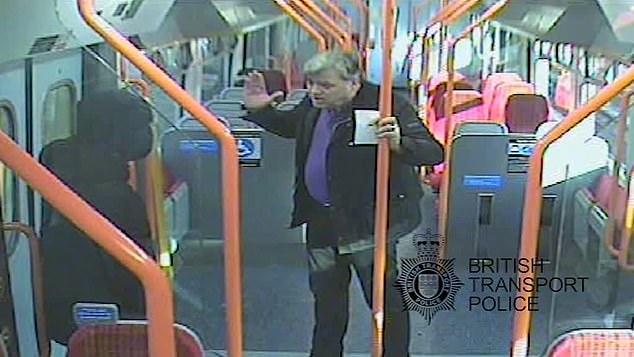 Shocking CCTV footage (pictured) showed Pencille whipping the lock-knife from his pocket and plunging it into Mr Pomeroy’s neck. Mr Pomeroy died on the platform at Horsley station

It can now be revealed that her husband’s killer had previously stabbed a flatmate in the neck in a row over a cigarette paper in 2010 and had threatened to kill a staff member at a mental health hostel just months earlier.

Since joining a south London gang as a teenager, Pencille had racked up 14 convictions for violent crime, burglary and possession of knives and a gun.

In a YouTube gang video he was seen smoking cannabis and bragged about battling rivals ‘to the f***ing death’.

Pencille was diagnosed with paranoid schizophrenia in 2003 but he refused to take medication – and instead treated himself by smoking super-strong cannabis each day.

Just 24 hours before the savage murder, he was seen by psychiatrist Dr David Ndegwa, who noted that he ‘continues to take cannabis regularly and did not want to change this’, even though Pencille warned him that it made him ‘more suspicious or aroused/argumentative’.

Dr Ndegwa said ‘his mood was normal, his speech was normal in form, and content though he spoke with anger about housing problems and at those times was aroused. There were no overt psychotic symptoms and he was more relaxed than on previous reviews.’ He concluded: ‘We had no concerns of risk to himself or to others.’

But within 24 hours, Pencille would unleash a ‘savage and unrelenting’ assault on Mr Pomeroy who he jostled past on a train, sparking a war of words after Pencille sniped at him: ‘Ignorance is bliss.’ Other passengers heard Pencille ‘ranting and raving’, before he pulled out a blade after threatening: ‘I’m going to kill this man.’ 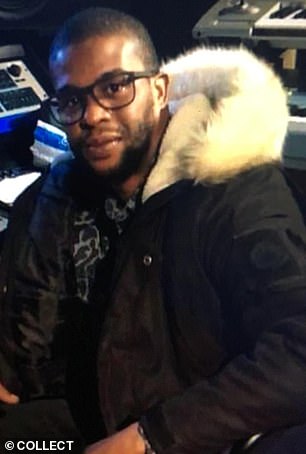 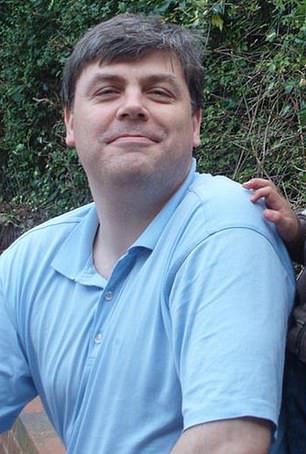 Darren Pencille, 36, was yesterday guilty of murdering Lee Pomeroy on a Guildford to London train in front of his 14-year-old son

Shocking CCTV footage showed Pencille whipping the lock-knife from his pocket and plunging it into Mr Pomeroy’s neck. Mr Pomeroy died on the platform at Horsley station.

Pencille refused to give evidence at his trial, claiming he had acted in self-defence. But jurors convicted him of murder after deliberating for 19 and a half hours.

She added: ‘Anyone who watched the breathtakingly shocking CCTV footage would struggle to understand how you thought you could claim you acted in self-defence. You left Lee Pomeroy’s son cradling his father’s head. The anguish of losing a father in such circumstances will stay with him.’

Yesterday Pencille’s girlfriend Chelsea Mitchell, 28, who ferried him away from the scene and helped him change his appearance, was found guilty of assisting an offender and sentenced to 28 months behind bars.

During the trial, it emerged she had contacted Pencille in prison while he awaited trial, breaking her bail conditions by sending him a Father’s Day card in memory of their stillborn baby.

She wrote: ‘I love you so much, everything is falling apart. Loosing (sic) everyone I love and all I want is my family back.’

Mr Blackburn, who was one of the first officers to arrive on the scene, said the killing involved ‘a level of violence I’ve not seen before in my time working for the BTP’.