A new smartphone app that has been developed by scientists can detect a child’s risk of developing asthma.

The app – called PARS – asks just six yes or no questions to weigh up if a child is at risk of the common condition.

The questions include whether the youngster has eczema or wheezing, and if either of their parents have asthma.

The tool then gives a score of between zero and 15 that estimates how likely the youngster will develop asthma by the age of seven. 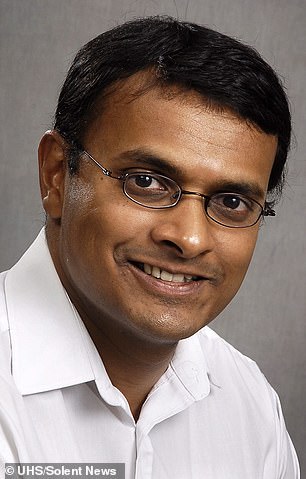 The app (seen left) asks six questions to weigh up if a child is at risk. It gives a score out of 14 and the per cent risk of the youngster developing the condition. Dr Ramesh Kurukulaaratchy (right), University Hospital Southampton NHS Trust, was one of the scientists behind the app

It is available on the Google Play Store and the Apple App Store.

Asthma affects one in every 12 adults and approximately one in 11 children in the UK, according to estimates.

Every ten seconds one of these 5.4million patients suffers a life-threatening asthma attack, with three people dying each day.

The condition affects one in 13 people in total in the US and one in 12 children, Asthma and Allergy Foundation of America statistics show.

Asthma is defined as a long-term condition that affects the airways, making them inflamed and ‘sensitive’.

When a patient comes into contact with a trigger – such as smoke, mould or dust – it cause their airways to tighten and the lining to swell.

The condition can be diagnosed by blowing into an instrument, called a peak flow test, that measures lung function. 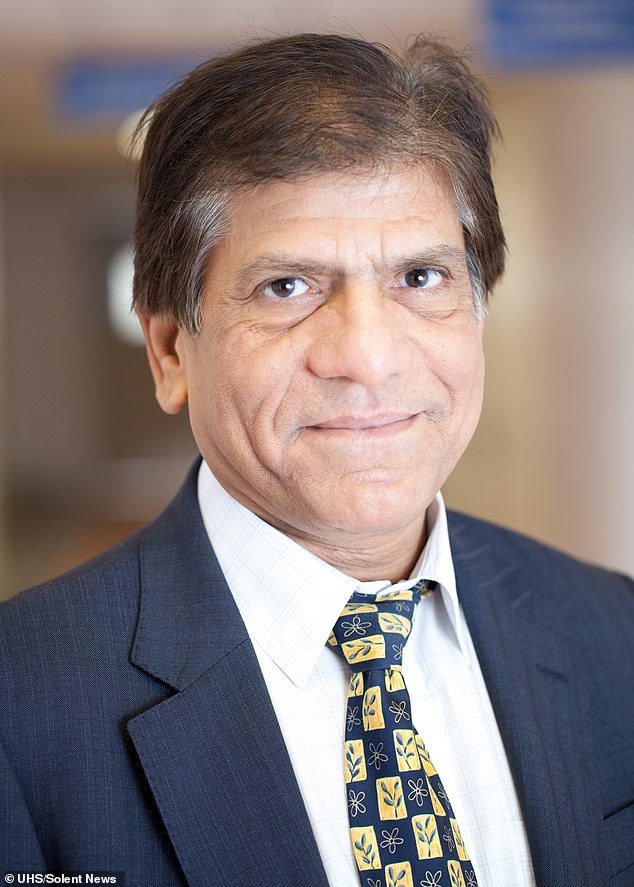 Professor Hasan Arshad, respiratory medicine consultant at the Southampton NHS trust, was co-author of the study

The app is based on a new system, know as the Paediatric Asthma Risk Score (PARS), which does not require a blood test but asks if the child:

Children with a score of zero are given a one in 33 risk of developing asthma before they turn seven.

While those who tick just one of the boxes are given a score of two and a six per cent risk, the app states.

Those who fulfill two of the six risks receive a score of five and a 15 per cent chance of developing asthma.

The risk continues to rise the more criteria a child meets, with them being given a 79 per cent risk if all six criteria are met.

Dr Ramesh Kurukulaaratchy, a respiratory medical consultant and part of the team at University Hospital Southampton NHS Trust, said: ‘A common question parents face is whether or not their wheezy child will go on to have asthma.

‘This simple tool should help clinicians answer that question with much greater confidence than before.

‘It can be used reliably for populations in the US as well as the UK, suggesting it has wide applicability.’

The researchers analysed PARS against the data of more than 2,000 babies born on the Isle of Wight, or in Cincinnati or Northern Kentucky.

Results, published in the Journal of Allergy and Clinical Immunology, suggest that the new system is 11 per cent more accurate than existing methods of assessing the risk of asthma.

Professor Hasan Arshad, co-author of the study and respiratory medicine consultant at UHS, added: ‘PARS has the potential to be an important innovation.

‘It does not require blood testing and has an improved ability to predict asthma development in children with fewer risk factors.’

The PARS app is available online, as well as on the Google Play Store and the Apple App Store.