First ever footage of the underside of the ‘doomsday’ Thwaites glacier has been sent back by a robotic yellow submarine dubbed Icefin.

Glaciologists have likened the groundbreaking images and video to the first steps on the moon taken by Neil Armstrong in 1969.

Early analysis reveals that turbulent warm waters underneath the ice sheet, which is the same size as Britain, are causing an ‘unstoppable retreat’.

Experts have previously predicted that if Thwaites was to melt completely, it would lead to a significant increase in worldwide sea levels of around two feet (65cm).

The impact on coastal communities around the world would be catastrophic. 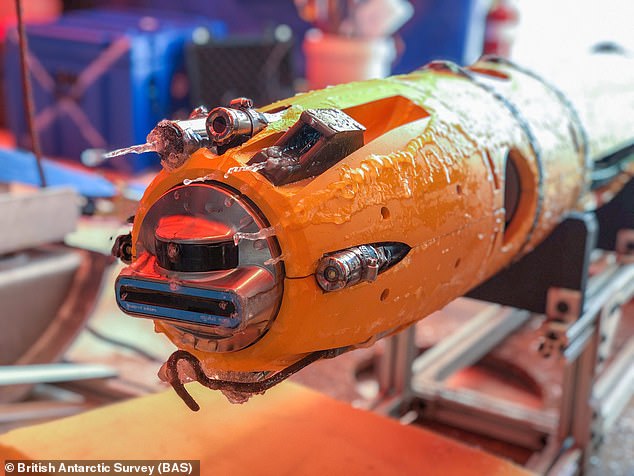 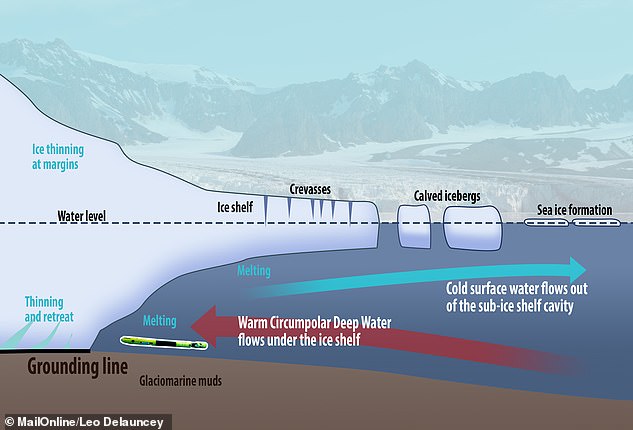 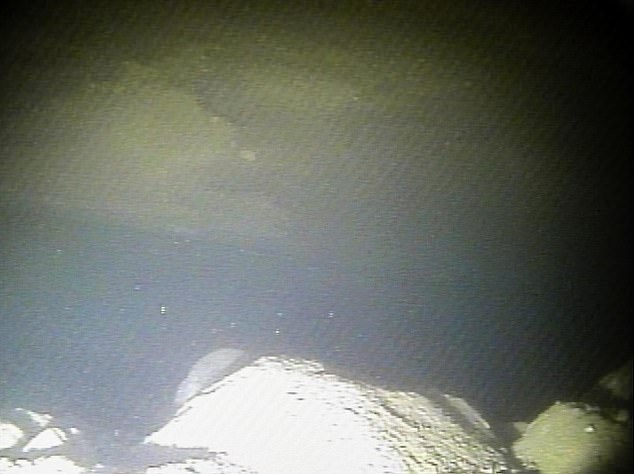 The icy ‘ceiling’ seen in the video is the bottom of the glacier’s ice shelf. This section floats in the water as opposed to being nestled on the seafloor

WHAT IS THE GROUNDING LINE?

A grounding line is the point at which a glacier meets with both the seabed and the ocean water.

It is the line between where the glacier rests on the ocean bed and where it floats over water.

The farther back the grounding line recedes, the faster the ice can flow into the sea, pushing up sea-level.

For the Thwaites glacier, the ice shelf is 1,900 feet thick at the grounding line.

Preliminary data from Icefin was analysed by a team of researchers at New York University and found, for the first time, the presence of warm water underneath the glacier at its grounding line — where the glacier rests on the ocean bed.

David Holland, director of New York University’s Environmental Fluid Dynamics Laboratory, said: ‘If these waters are causing glacier melt in Antarctica, resulting changes in sea level would be felt in more inhabited parts of the world.’

‘The fact that such warm water was just now recorded by our team along a section of Thwaites grounding zone where we have known the glacier is melting suggests that it may be undergoing an unstoppable retreat that has huge implications for global sea level rise,’ notes Holland, a professor at NYU’s Courant Institute of Mathematical Sciences.

Icefin was deployed five times and covered a distance of more than nine miles (15km) after being released through a borehole 2,000ft (600-meter) deep and 12 inches (35cm) wide earlier this month.

Two of the missions involved travelling as close as possible to the grounding line.

It was recently announced that in mid-January scientists conducted the first fieldwork on Thwaites.

One of the projects from a vast UK-US joint task force involved drilling holes through the glacier near its grounding line.

The submersible yellow submarine-like robot Icefin is capable of navigating the sub-zero waters and was fed through one borehole to study how the glacier is melting.

Icefin is designed to take several measurements, including tracking the turbulence of the water as well as its temperature.

Icefin swam more nine miles (15 km) during five missions, including two to the grounding site — where most melting is thought to be occurring. 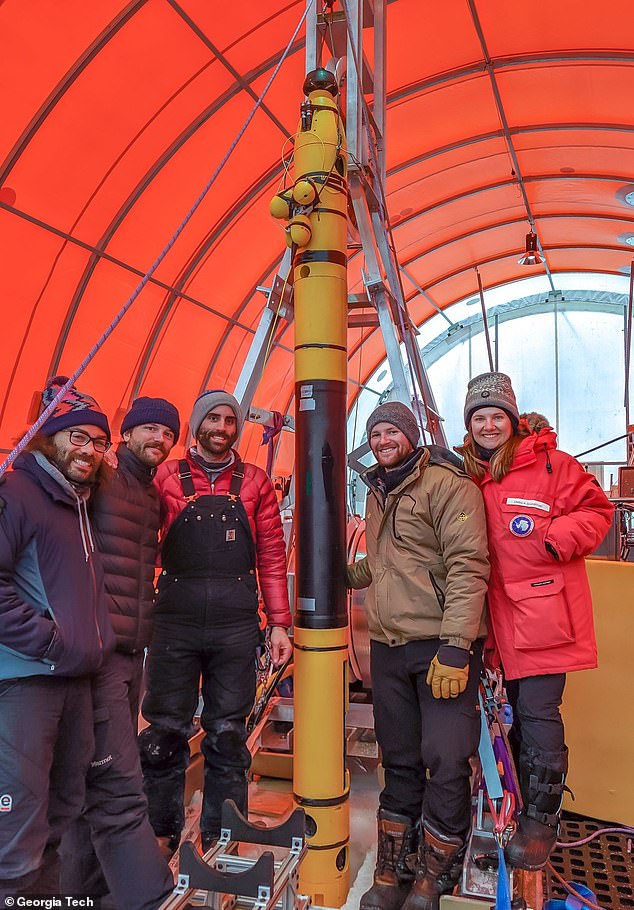 One of the projects from a vast UK-US joint task force drilled holes through the glacier near its grounding zone (pictured, researchers on Thwaites) 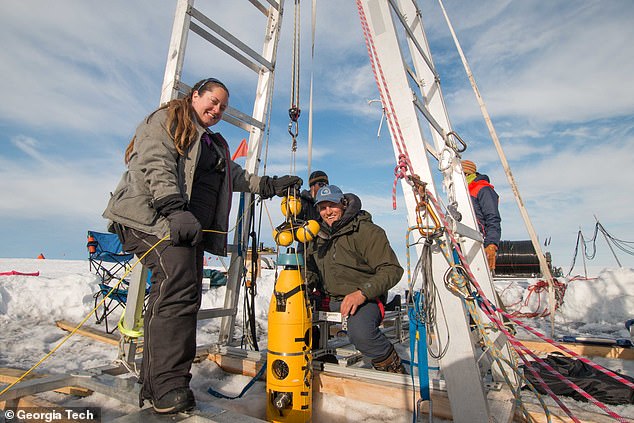 Icefin was deployed five times and covered a distance of more than nine miles (15km) after being released through a borehole 2,000ft (600-meter) deep and 12 inches (35cm) wide

Researchers studied data from the submersible remote-controlled robot and found warm turbulent water is causing high levels of melting at the grounding zone, pictured here for the first time ever by Icefin 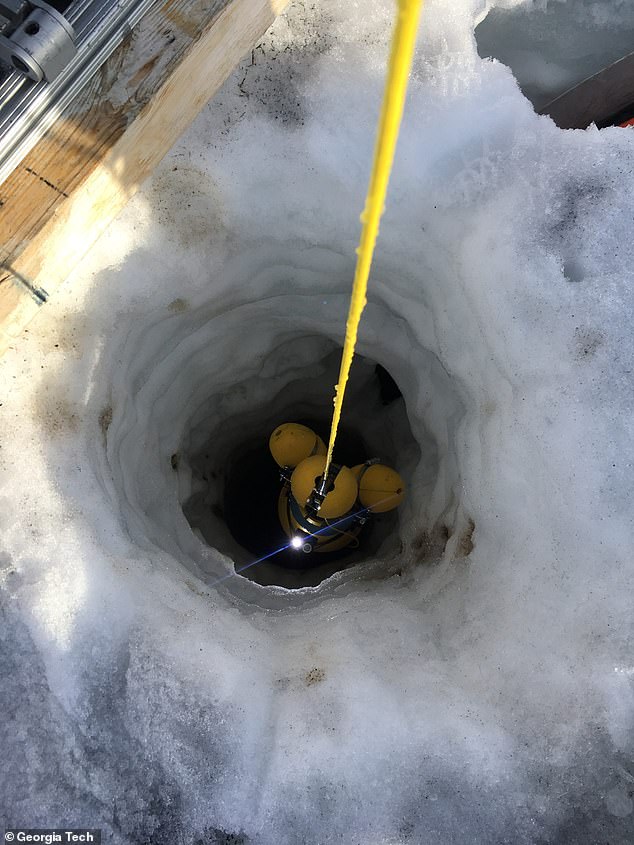 The Icefin robot is pictured being retrieved after one of its five missions under the Thwaites glacier. Two missions took it as close as possible to the grounding line and took the first ever measurements and footage of the critical juncture

Dr Britney Schmidt, a glaciologist at the Georgia Institute of Technology, said: ‘We saw amazing ice interactions driven by sediments at the [grounding] line and from the rapid melting from warm ocean water.’

Icefin measured, imaged and mapped the process causing melting at this critical part of the glacier.

The icy ‘ceiling’ seen in the video is the bottom of the glacier’s ice shelf. This section floats in the water as opposed to being nestled on the seafloor.

The observations made by Icefin capture sediment that was on the sea floor just hours previously, as the glacier drifts constantly, exposing new sections of the ice.

Britney Schmidt, a glaciologist at the Georgia Institute of Technology, told The Athletic: ‘We can definitely see it melting.

‘There are a few places where you can see streams of particles coming off the glaciers, textures and particles that tell us it’s melting pretty quickly and irregularly.’

Melting of Thwaites is cause for global concern as its sheer enormity means that it contains enough ice that, if it was to melt, there would be worldwide implications.

Sea level rise would be drastic, up to around 25 inches (63.5cm), and the reach of the ripple-effect would be vast.

Already, Thwaites accounts for about four per cent of global sea-level rise as warming waters cause it to melt from the underside.

Researchers have long held concerns that a tipping point in the stability at its foundations could result in a run-away collapse of the glacier.

Icefin was developed and deployed by scientist to study the very root of the issue as no cameras had ever been taken to a grounding point of any glacier, let alone one of such importance as Thwaites.

‘Visiting the grounding line is one of the reasons work like this is important because we can drive right up to it and actually measure where it is,’ said Dr Schmidt.

‘It’s the first time anyone has done that or has ever even seen the grounding zone of a major glacier under the water, and that’s the place where the greatest degree of melting and destabilisation can occur.’

Researchers also took cores of sediment from the seafloor and under parts of the glacier grounded on the bed to examine the quality of the foothold that it offers Thwaites.

‘We know that warmer ocean waters are eroding many of West Antarctica’s glaciers, but we’re particularly concerned about Thwaites.

‘This new data will provide a new perspective of the processes taking place, so we can predict future change with more certainty,’ said Keith Nicholls, an oceanographer from the British Antarctic Survey.

WHAT WOULD SEA LEVEL RISES MEAN FOR COASTAL CITIES?