A group of 13 migrants have suffered mild hypothermia trying to cross the Channel to Britain in a ‘pleasure craft’ today.

French officials intercepted the mend after their boat hit difficulty around three miles west of Calais at 6.35am local time.

They were rescued by authorities using a canoe, and were taken back to France shortly after 8am.

A statement from France’s Prefecture Maritime said they had suffered mild hypothermia, and warned migrants that the journey across the Dover Strait is life-threatening.

It said: ‘They are all safe and sound thanks to the efficiency and reactivity of the actors acting daily for the action of the State at sea and the safeguarding of human life.

‘The Maritime Prefect of the English Channel and North Sea warns migrants who plan to cross the English Channel, one of the busiest areas in the world and where weather conditions are often difficult, and is therefore dangerous to human life.’

It comes after another 13 migrants made it into the UK crammed on a small boat yesterday, with the group being picked up by Border Force off Folkestone, Kent.

They were brought ashore with help from the Coastguard and have been taken to the Kent Intake Unit at Dover for screening.

A Home Office spokeswoman said: ‘At approximately 9:41am Border Force and HM Coastguard were informed of a small boat travelling across the Channel.

‘HM Coastguard and Border Force were deployed and met the boat near Folkestone and 13 individuals were brought ashore. The individuals are in the process of being transferred to the Kent Intake Unit.’ 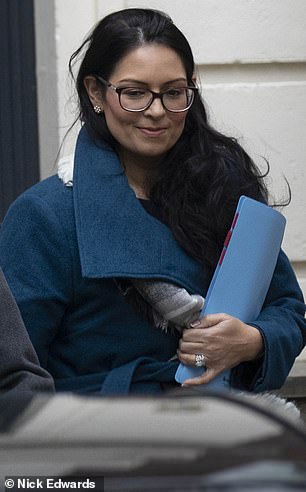 A further 11 migrants were yesterday picked up by French authorities after their boat got into difficulty off Boulogne.

Around 1,600 migrants have made it into Britain this year – a record figure eclipsing the numbers from last year, despite millions of pounds being invested into security measures to prevent crossings.

At least 142 asylum seekers have successfully crossed the Channel this month – more than the whole of last November when the crisis took hold.

In August, a record 336 migrants crossed – including 86 in one day.

But the problem has worsened throughout 2019, and Home Secretary Priti Patel last month revealed she had agreed an ‘action plan’ with France.

She said patrols across the French coast had been doubled to stop people smugglers. The Home Office had previously funded drones to scour France’s beaches.