Group of investigators claim to have identified Zodiac killer

A group of veteran investigators calling themselves the Case Breakers believe they have finally uncovered the true identity of the Zodiac Killer – one of America’s most notorious serial murderers – who they say died quietly in 2018 without ever being brought to justice for his grisly crimes.

Poste passed away in Groveland, California, on August 14, 2018. He was 80 years old. He was never charged with any offenses related to the Zodiac killer, who terrorized the Bay Area communities during the late 1960s. 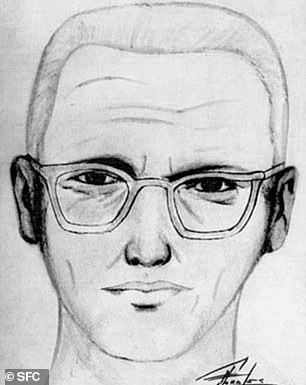 A group of volunteer sleuths have identified Gary Francis Poste as the Zodiac Killer. Poste, then aged 78, is pictured in a 2016 mugshot following a domestic battery arrest. The sketch on the right shows the Zodiac murderer

The team of volunteer investigators used photographic evidence comparing a distinctive scar seen in sketches depicting the Zodiac killer to known photos of Poste over past six decades to make the identification, as Fox News first reported.

They also relied on accounts of people who knew Poste, including a neighbor whom the alleged serial and his wife used to babysit as a child, a man who claimed to have been a part of Poste’s criminal ‘posse’ that roamed the High Sierra region, and an ex-girlfriend of Poste’s son. 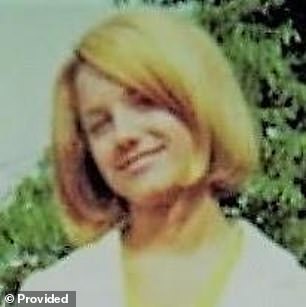 Five people were fatally stabbed or shot to death in Northern California in 1968 and 1969, and their killer sent taunting letters and cryptograms to the police and newspapers.

The killer was dubbed ‘Zodiac’ because some of his cryptograms included astrological symbols and references.

The series of unsolved murders inspired many books, documentaries and movies.

According to new information released by the Case Breakers, the Zodiac killer was also responsible for the brutal killing of co-ed Cheri Jo Bates, 18, who was found stabbed 42 times and nearly decapitated on October 31, 1966, in Riverside, more than 400 miles south of San Francisco and two years before the Zodiac’s first known killing. 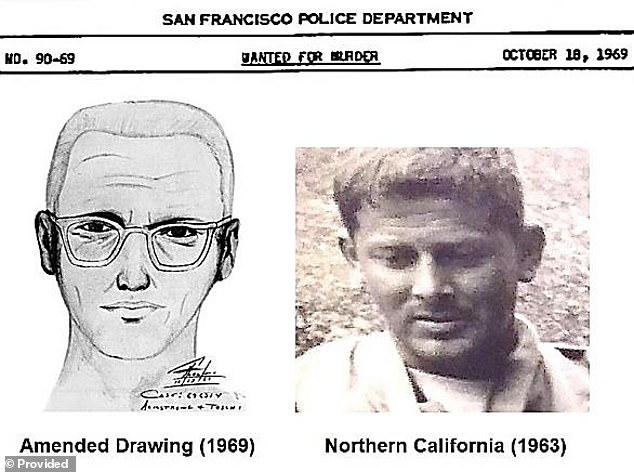 The sketch of the Zodiac suspect shows on the left what is claimed to be a scar on the forehead. Investigators believe Poste’s photo at age 25 shows the same tell-tale scar

Members of the investigative group claimed that around the time of Bates’ murder, Poste, an Air Force veteran, was getting a check-up at a hospital located just 15 minutes away from the crime scene.

A wristwatch splattered with paint and believed to have been worn by the killer was found near Bates’ body. Case Breakers noted that Poste spent 40 years working as a house painter.

Additionally, a heelprint found in the dirt at the scene of the stabbing was said to have been been from a ‘military-style boot’ consistent with the style and size of footprints found at three known Zodiac crime scene, and also of Poste. 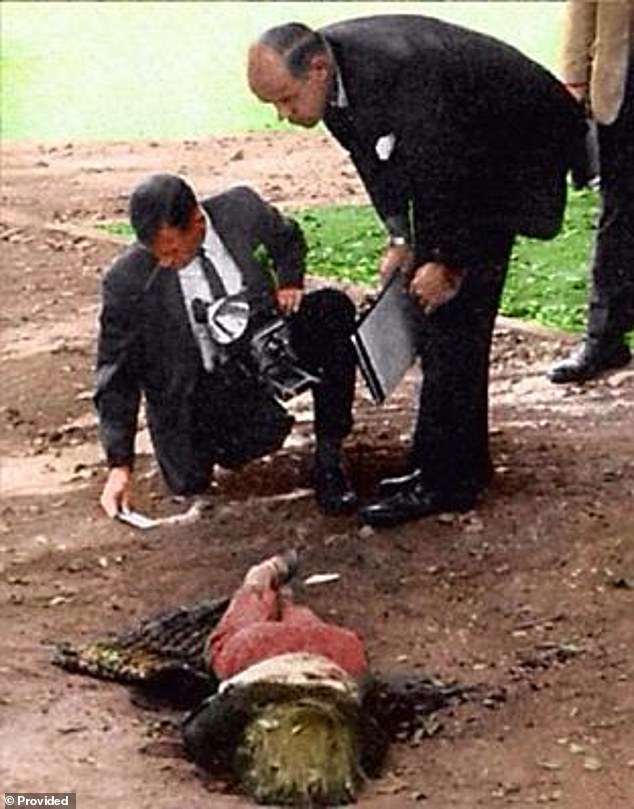 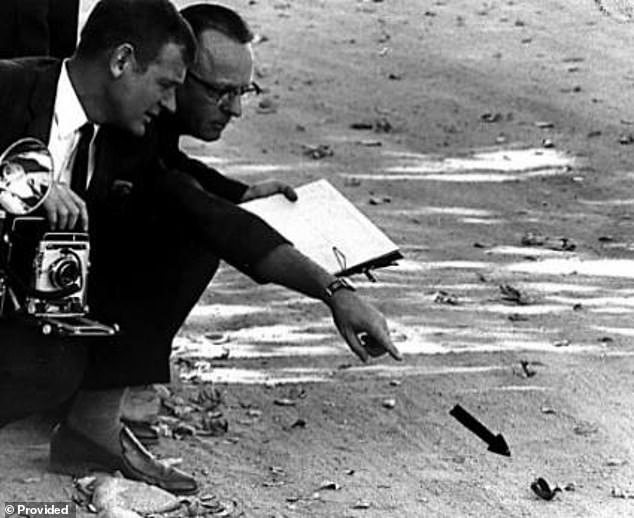 Police recovered a watch, which allegedly belonged to the co-ed’s killer 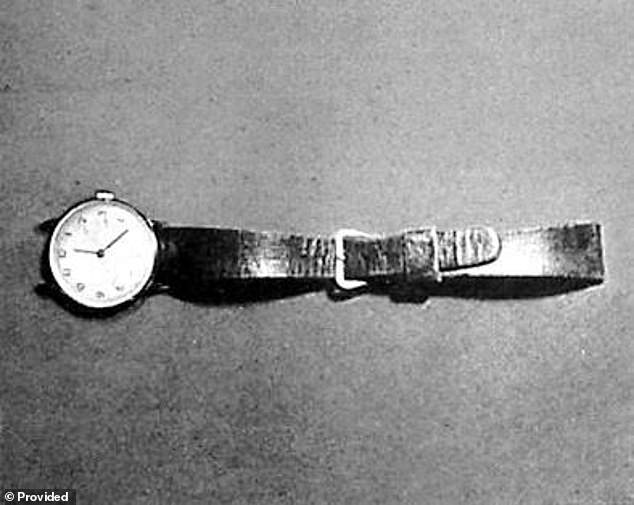 According to the Case Breakers, the watch was splattered with paint; Poste worked as a house painter since the early 1960s 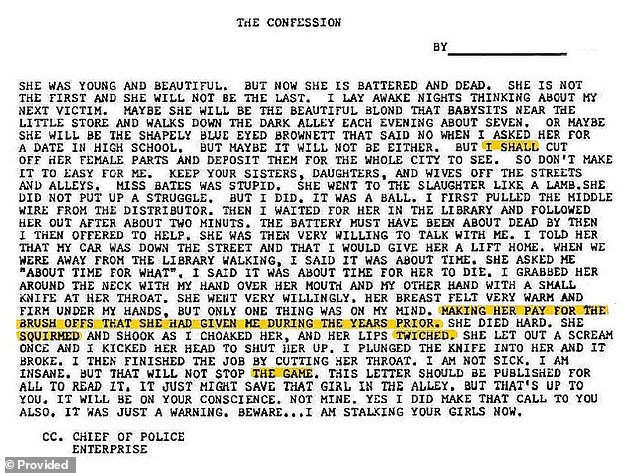 In 1967, the Riverside Police Department received a confession from a person admitting to have killed Bates; in 2016, the note’s author said he was disturbed youth seeking attention 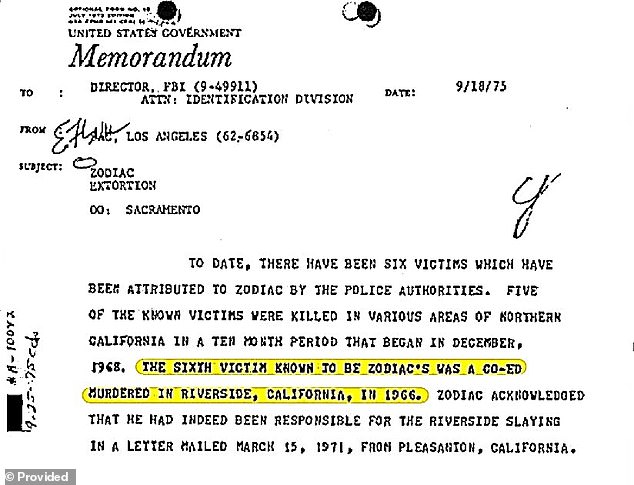 In 1975, an FBI memo described Bates as the Zodiac Killer’s sixth victim; The Riverside police now say they have ruled out any connection between Bates’ murder and the serial killer

A year after Bates’ murder, the Riverside Police Department received an anonymous letter, whose author appeared to confess to murdering Bates for turning down his romantic advances.

In 1975, an FBI memo sent to the Riverside Police Department linked the Bates murder to the Zodiac killings, describing the 18-year-old woman as the elusive murderer’s sixth victim.

Officer Ryan Railsback, the spokesperson for the Riverside Police Department, told DailyMail.com on Wednesday that their homicide unit, working with FBI genealogists, has ruled out any links between the Bates murder and the Zodiac killer, or anyone being potentially identified as the Zodiac killer. 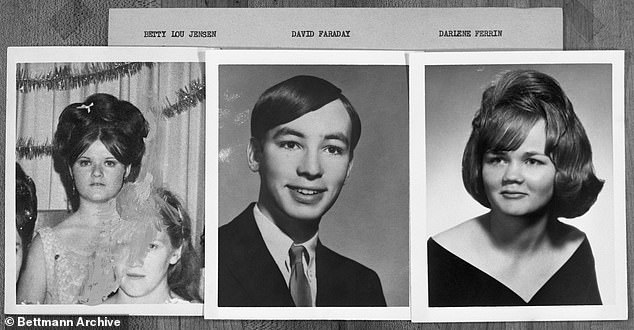 Betty Lou Jensen (left), David Faraday (center), and Darlene Ferrin (right), are believed to be victims of the Zodiac Killer 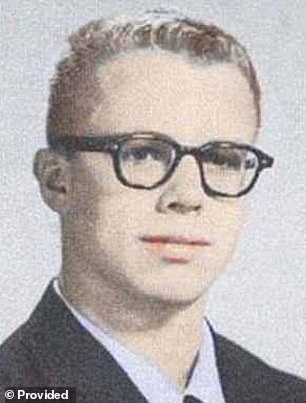 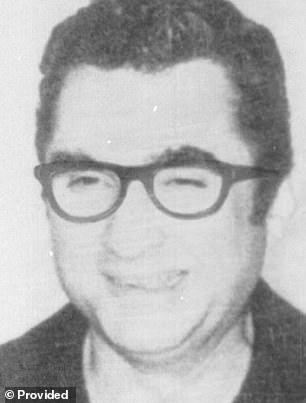 Although the Zodiac Killer claimed to have killed as many as 37 people in his letters to local newspapers, police have only linked five murders – and two other injuries – to him.

On December 20, 1968, David Arthur Faraday, 17, and Betty Lou Jensen, 16, were on their first date when they pulled over into a lovers’ lane on Lake Herman Road in Benicia. There, they were forced from the car by a killer and Faraday was shot in the head. Jensen began to run away but was shot multiple times in the back.

On July 4, 1969, Michael Renault Mageau, 19, and Darlene Elizabeth Ferrin, 22, were in the parking lot of Blue Rock Springs Park in Vallejo – 4 miles from the first crime scene – when they were shot ‘to pieces’, according to the investigator. But while Ferrin was pronounced dead on arrival, Mageau survived being shot in the face, neck and chest.

On September 27, 1969, Bryan Calvin Hartnell, 20, and Cecelia Ann Shepard, 22, were having a picnic at Lake Berryessa in Napa County when they were approached by a hooded man who bound and stabbed them. Hartnell survived eight stab wounds to his back, but Shepard died two days later.

On October 11, 1969, cab driver Paul Lee Stine, 29, picked up a passenger and drove him to Presidio Heights – where he was shot in the back of the head and robbed. The killer also ripped part of Stine’s shirt, which he later sent with a letter to a local newspaper. 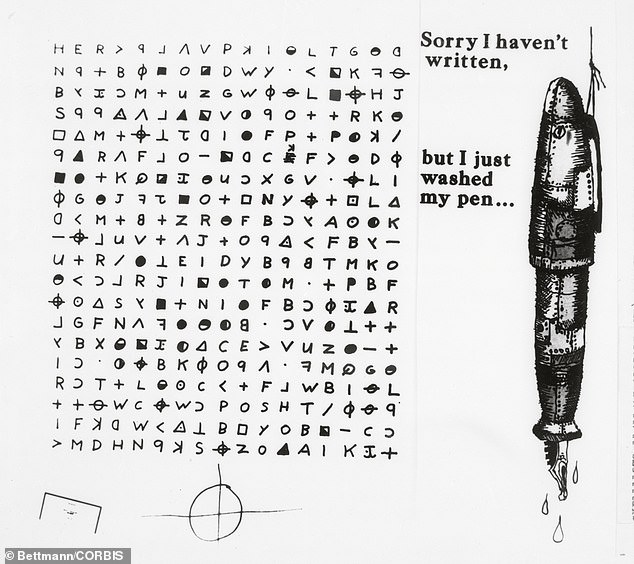 ‘I hope you are having lots of fun in trying to catch me.

That wasn’t me on the TV show, which brings up a point about me.

I’m not afraid of the gas chamber.

Because it will send me to paradise all the sooner, because i now have enough slaves to work for me.

Where everyone else has nothing when they reach paradise so they are afraid of death.

I am not afraid because I know that my new life will be an easy one in paradise.’

Railsback said the FBI memo tying Bates’ slaying to the Zodiac killing was based on the confession letter, which in 2016 was revealed to be a fake.

That year, someone sent an unsigned, typed-up note to the police, revealing that they had sent the bogus confession, which was in fact a cry for attention from ‘a troubled youth.’

Railsback stressed that the Bates case remains open, and there is still an active $50,000 reward being offered for information leading to an arrest.

The police spokesperson noted that last month, an entertainment lawyer with alleged ties to the Case Breakers reached out to the department, saying that his client had information about the Bates case, and asking if the tipster would be eligible to receive the reward money, even if the alleged killer was already dead.

Railsback said he expressed interest in the information but never heard back from the attorney.

‘If we really had information that the Zodiac killer was related to Cheri Jo Bates, we would not hide that,’ he stressed. ‘We’re not going to hide information, especially 55 years later.’

In 2020, a ciphered letter mailed to a San Francisco newspaper by the Zodiac killer in 1969 was  cracked by a team of amateur code-breakers from the United States, Australia and Belgium.

According to code-breaking expert David Oranchak, the cipher’s text includes: ‘I hope you are having lots of fun in trying to catch me. … I am not afraid of the gas chamber because it will send me to paradise all the sooner because I now have enough slaves to work for me.’

Little is known about Poste’s life beyond the fact that he was married, had stepson, and worked as a house painter after retiring from the US Air Force, according to information gathered by the Case Breakers. 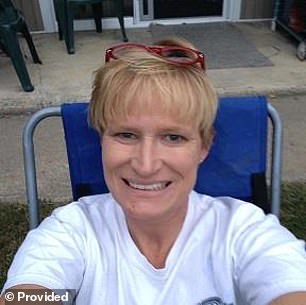 A woman named Michelle said she was the common-law wife of Poste’s son, and that Poste had sicced members of his criminal ‘posse’ to harass and intimidate her

In February 2016, The Union-Democrat reported that 78-year-old Gary Francis Poste, from Groveland, was arrested at his home on Merrell Road on suspicion of inflicting corporal injury on a spouse.

A California woman who lived next door to Poste and his wife, and who had been babysat by the couple as a child in the 1970s and 80s, said she now believes her neighbor was the Zodiac killer.

The woman, who gave her name only as Gwen, said Poste taught her how to shoot, sometimes going into the woods for target practice five days a week.

‘In the last year of her childcare, [Gwen] witnessed his callousness and violence towards his wife – a wife that only slept on a couch,’ according to the Case Breakers.

In a recent a phone conversation between Gwen with Poste’s widow, who is now residing in an assisted living facility, the elderly woman was said to have told her former neighbor: ‘I’m sorry that I didn’t tell the cops about his past.’

A man named Hans Smits told the Case Breakers that over the past 10 years, he had shielded a ‘Zodiac whistleblower,’ who had allegedly escaped from Poste’s criminal ‘posse’ that was said to have been active in the High Sierra area of California for several decades. 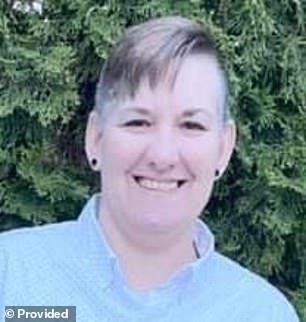 A woman named Gwen who lived next door to Poste and his wife, and who had been babysat by the couple as a child, now believes her neighbor was the Zodiac killer

‘Now in his 50s and hiding in the Northwest, [the whistleblower] says he’s angry and ashamed, claiming the psychopath “groomed me into a killing machine,”’ according to the investigative group.

A woman named Michelle said she was the common-law wife of Poste’s son, and the mother of his grandson, who is now in his 30s.

According to Michelle, when her 10-year relationship with Poste’s son ended, the house painter sicced two members of his ‘posse’ to break her windows, harass and assault her, ultimately driving her out of state.

The FBI stated in 2020 that the Zodiac Killer case remains an ongoing investigation for its San Francisco division and the local police.