Rare footage has captured the horrifying moment a dolphin was ravaged by killer whales off the coast of Africa.

The gruesome attack was captured by scientists who recorded the moment the dolphin was tossed out of the water and into the jaws of one of the huge mammals.

Its ravaged carcass was washed up on a beach days later after being torn apart by two of the beasts.

Images of the remains of the Heaviside’s dolphin show the body after it was disembowelled and shredded of its blubber.

Researcher Dr Simon Elwen said while such attacks were not uncommon, in 20 years of research on marine mammals, he had never seen a carcass so severely ravaged.

The body was found washed ashore on a beach near Pelican Point, Namibia, earlier this month.

Authorities contacted a marine biology team to identify the creature but, by the time they reached the scene, the body had been swept back into the ocean.

In a twist of fate, the same scientists had captured the start of the feeding frenzy footage just one day earlier.

The research team, known as Namibian Dolphin Project (NDP), was looking at the impact of an oil spill when the distinct dorsal fin of a killer whale broke the surface of the water.

In a flurry of activity, two killer whales can be seen in the clip hunting the unfortunate dolphin.

Dr Elwen, who is the NDP Director, said: ‘The heavily mutilated, freshly dead carcass was reported on a nearby beach through the local strandings network.

The gruesome remains of a Heaviside’s dolphin show the body after it was disembowelled and shredded of its blubber. Scientists captured the stunning moment the dolphin is tossed out of the water in the jaws of the huge whale 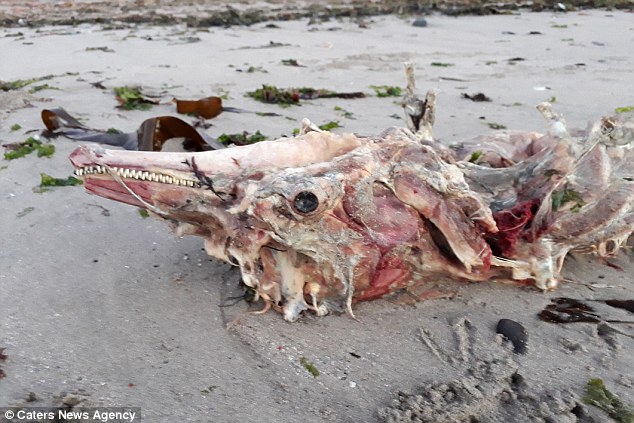 The day before the dolphin carcass washed up on a Namibian beach, researchers were investigating an oil spill when they caught two killer whales mauling a dolphin on camera. Experts believe that the death is as a result of the killer whale hunt 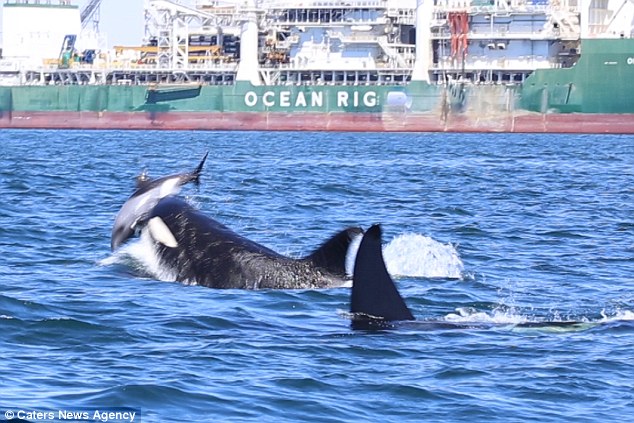 Scientists captured the stunning moment the dolphin is tossed out of the water in the jaws of the huge whale. The rare sighting was the first time the group had witnessed killer whales in those waters in 600 trips

‘The NDP responded to the call but the carcass could not be found and is thought to have washed out to sea.’

Dr Elwen said in 20 years of research on marine mammals, he had never seen a carcass so severely ravaged.

Whilst the team can not study the remains, they believe the footage and the condition of the carcass indicate that the killer whales were responsible. 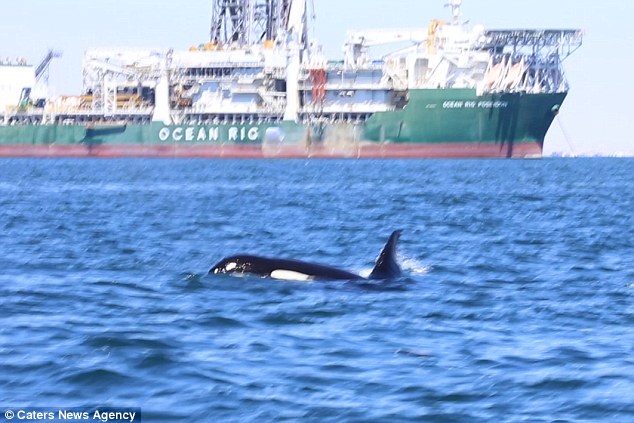 Whilst the team can not study the remains, they believe the footage and the condition of the carcass indicate that killer whales are responsible

HOW COMMON IS IT FOR KILLER WHALES TO HUNT DOLPHINS?

Killer whales, also known as orcas and blackfish, are one of the top predators in the sea.

They are an apex predator, with no natural enemies.

They have been known to eat most animal such as large sharks.

Highly intelligent and social creatures, they work as a pack to hunt and kill their prey.

Their diet can vary depending on region but they have been known to eat anything from sea birds and squid to sharks and even moose.

Dolphins do make up a portion of their diet, but footage of it is uncommon.

Dolphins are normally faster swimmers than the larger killer whale, but the orcas will work as a pack to hunt.

Operating in their pod, killer whales have been observed working in spaced out groups to isolate dolphins.

Eventually, it becomes exhausted and the dolphin runs out of energy.

Once the dolphin is no longer able to run the killer whale may rush in and charge the dolphin, hit it or flip it into the air in order to immobilise it before going in for the kill.

‘I have only ever seen animals “peeled” of their blubber and with their organs pulled out being caused by killer whales,’ Dr Elwen added.

‘So there’s every indication the carcass belonged to the adult Heaviside’s dolphin attacked in our footage from the day before.’

Killer whales hunt in packs, attacking their prey from multiple directions to keep them from escaping.

In this attack, the whales hunted as a pair, with one attacking and the other orca circling ominously. 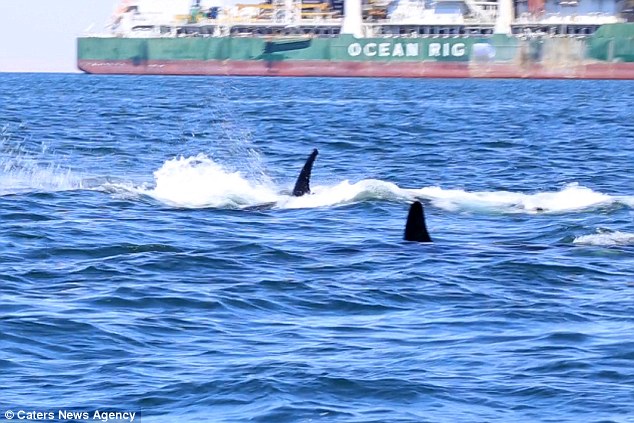 The scientists had unwittingly captured an ultra-rare feeding frenzy as the apex predators hunted their fellow marine mammal. 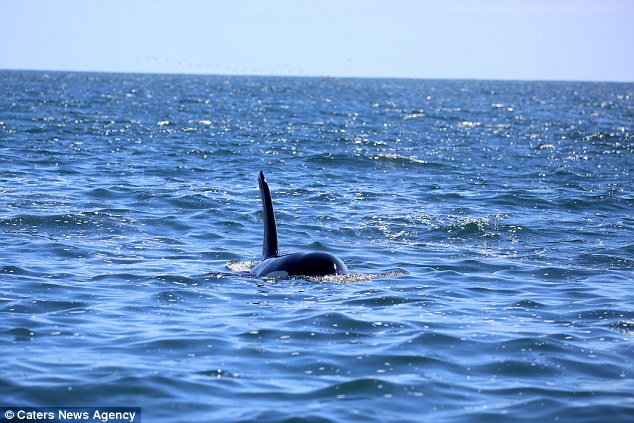 In this event, the whales hunted as a pair, with one attacking and the other orca circling ominously. The rare sighting was the first time the group had witnessed killer whales in those waters in 600 trips

The rare sighting was the first time the group had witnessed killer whales in those waters in 600 trips.

Dr Elwen said: ‘This is a once-in-a-lifetime event with highly valuable data, so the team mobilised immediately.’

‘After about an hour they spotted a very quick rush at the surface back and forth. The larger killer whale lifted his body out of the water and revealed an adult sized Heaviside’s dolphin in his mouth.

‘We could see that the Heaviside’s dolphin was bleeding but there was no further struggle and the killer whales dove underwater with their prey.’

HOW DO WHALES COMMUNICATE AND COULD THEY ONE DAY TALK TO HUMANS?

How do whales communicate?

Whales are known for using complex clicks and singing to communicate with each other – even if they are hundreds of miles apart.

Whales that are closely related or live together produce similar pulsed calls that carry vocal characteristics distinct to the group, known as a dialect.

Clicks are believed to be primarily used for navigation and identifying objects such as prey in the environment but they are also used for social interactions.

Members of a pod have similar calls known as a dialect, which is composed of types of discrete, repetitive calls.

Newborns copy the call of their mother.

It’s thought that individuals learn their dialect though contact with their mothers and other pod members.

Norwegian and Icelandic herring-eating orcas are believed to have different vocalisations for activities such as hunting and travelling.

Could they talk to humans?

The fact the whale produces these sounds shows they are able to learn sounds by copying and helps us understand their lives in the wild.

However, when Wikie says ‘hello’ it means absolutely nothing to her.

She does not attach any meaning to this sound and is not ‘talking’ to humans.

The word is completely out of the normal sound repertoire of whales and was chosen as a nonsense sound. 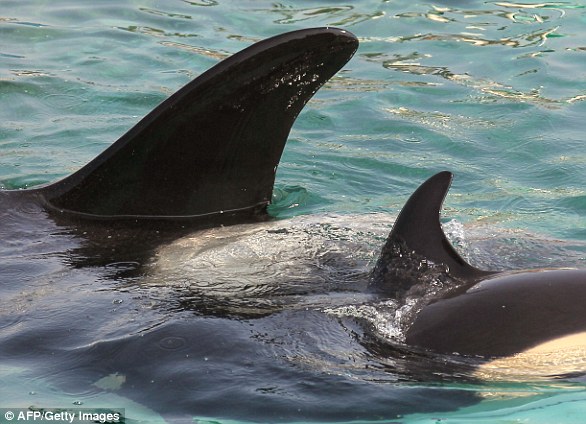 When Wikie says ‘hello’ it means absolutely nothing to her. She does not attach any meaning to this sound and is not ‘talking’ to humans

Although the researchers did not set out to test Wikie’s communication skills, the scientist who led the study believes basic ‘conversations’ with her may one day be possible.

Dr Jose Abramson, from Complutense de Madrid University in Spain, said: ‘Yes, it’s conceivable … if you have labels, descriptions of what things are.

‘It has been done before with a famous grey parrot and dolphins using American sign language – sentences like ‘bring me this object’ or ‘put this object above or below the other’.’

The experiment proves there is a lot of complex communication happening among whales and dolphins.