Thanks to the Hogwarts school uniform, concepts like ‘fashion’ and ‘style’ aren’t exactly on the minds of Harry Potter and his classmates — and of course, being hunted by He-Who-Must-Not-Be-Named might seem like a bigger problem than potentially committing a fashion faux pas.

But what if the characters in Harry Potter were, actually, devoted Vogue readers? How would the movies have looked if Harry, Ron, and Hermione did their shopping on Net-a-Porter instead of at Madame Malkin’s?

That’s what one Instagram account has set out to imagine. Called ‘Gryffindior,’ the witty (and fashion-forward) pages Photoshops stills from the Potter movies to depict the characters dressed in ensembles by Christian Dior.

If only the Sorting Hat were designer! Things might have been a whole lot different for Ron if his mom’s Weasley sweaters were ripped from the catwalk 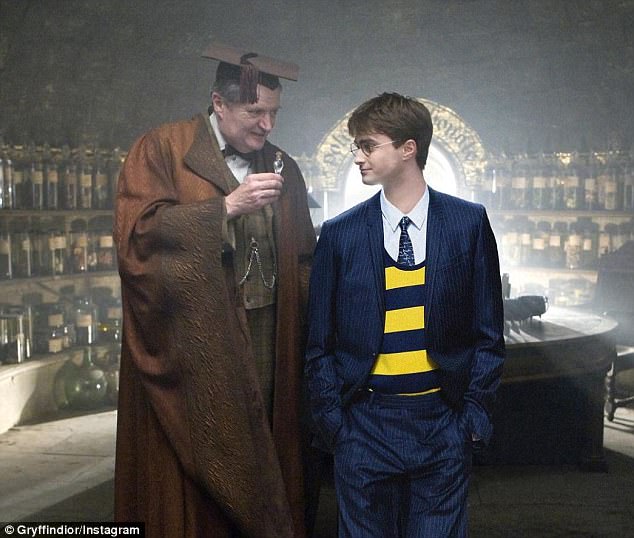 The magic of a good outfit! If Harry really looked this debonair, he’d have no need for that Felix Felicis — he’d charm information out of anyone 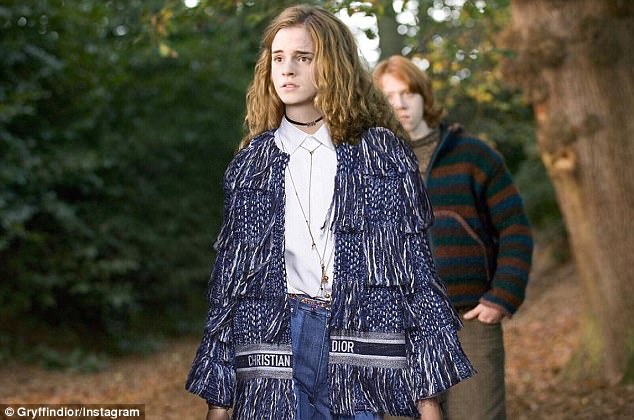 Someone got new robes! Hermione actually looks quite natural in this ebsemble. Now if only she could get her hands on some Sleekeazy’s Hair Potion to tame that mane… 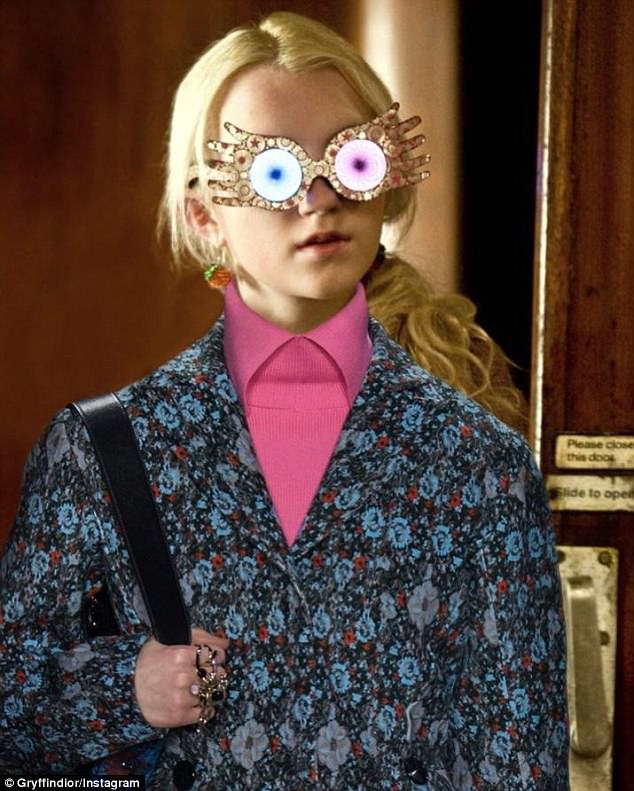 The new account was launched by New York-based art director Rachel Leigh, who works at high-end fashion retailer Moda Operandi, on January 10, and so far has shared just seven images.

With a simple but punny tagline reading ‘flatform 9+3/4,’ the aim of the page is clear: to transform — or transfigure, if you will — outfits from the Potter films into one from the Paris Fashion Week runways.

The images have been doctored so that Harry, Hermione, Ron, Luna, Neville, and Pavarti Patil are all dressed in not Hogwarts robes and scarves with house stripes, but designer emsembles.

Most of the runway looks used so far are more recent, taken from collections by current creative director Maria Grazia Chiuri. However, there are also some that were designed by Raf Simons, who left the design house in 2015. 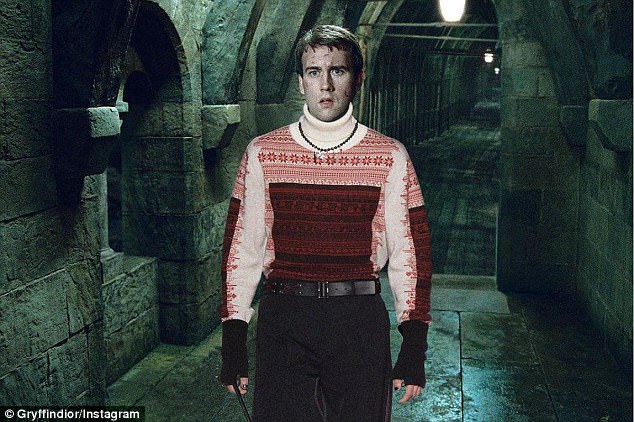 From Herbology class to the runway! It might make sense that Neville Longbottom’s growing confidence would be accompanied by a makeover 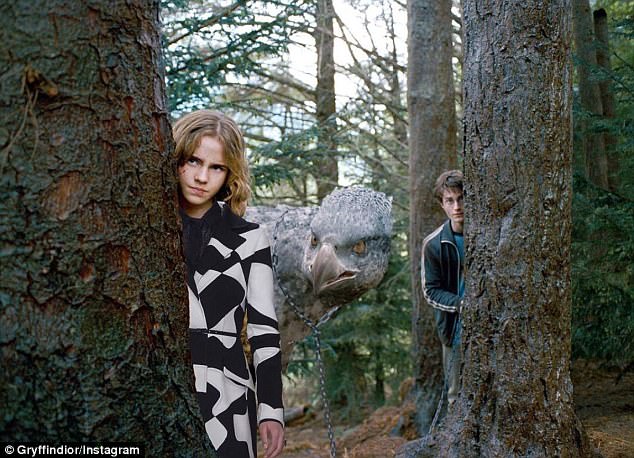 Haute for hippogriff: Hermione looks even more fabulous helping Buckbeak break loose in her outfit from the Couture 2018 show 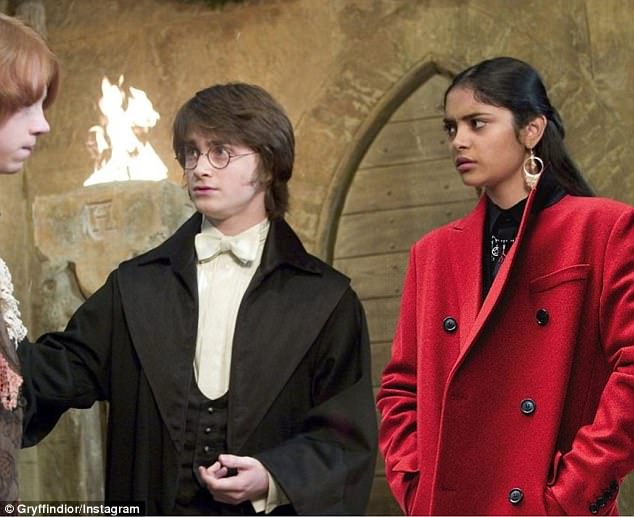 Goblet of Fierceness! Harry’s Yule Ball dress robes in Goblet of Fire have noting on the bold Fall 2016 coat his date Parvati Patil is wearing

Hermione’s shown in a fringe Dior jacket and a black-and-white coat from the latest couture collection, while Luna’s seen wearing a high-collared pink shirt layered with a floral blue coat.

Harry looks very dapper in a scene from the Half-Blood Prince, dressed in a three-piece suit with a blue-and-yellow striped vest (which, oddly, are Ravenclaw colors).

Ron looks quite out of place and out of his comfort zone in a sweater vest and matching scarf, while Neville does his best male model impression in a fair isle turtleneck and fingerless gloves.

It appears that in each case, a model’s body was Photoshopped into the scene, leaving the character’s face and the movie setting in place. 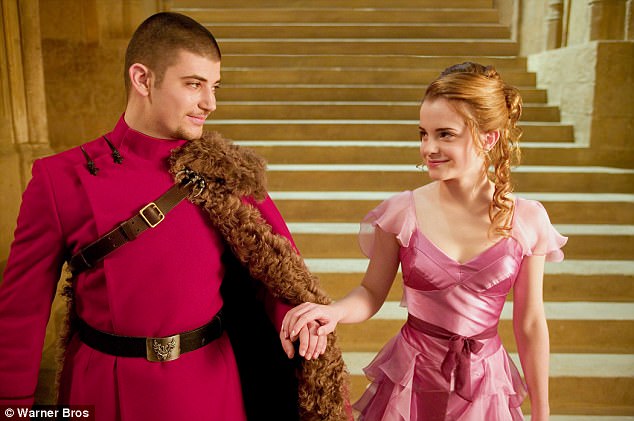 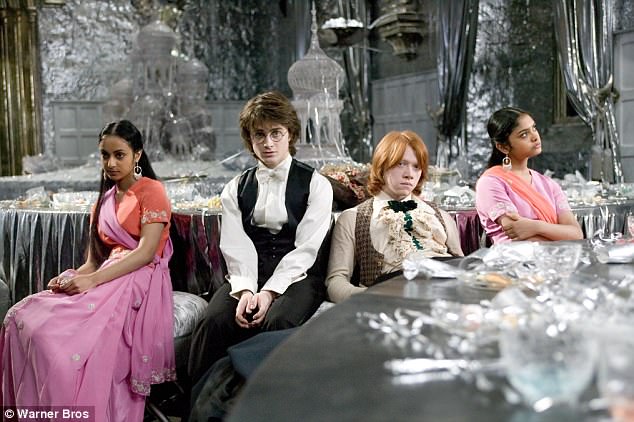 Cast a style spell: There’s room for a lot more fun with other Yule Ball outfits 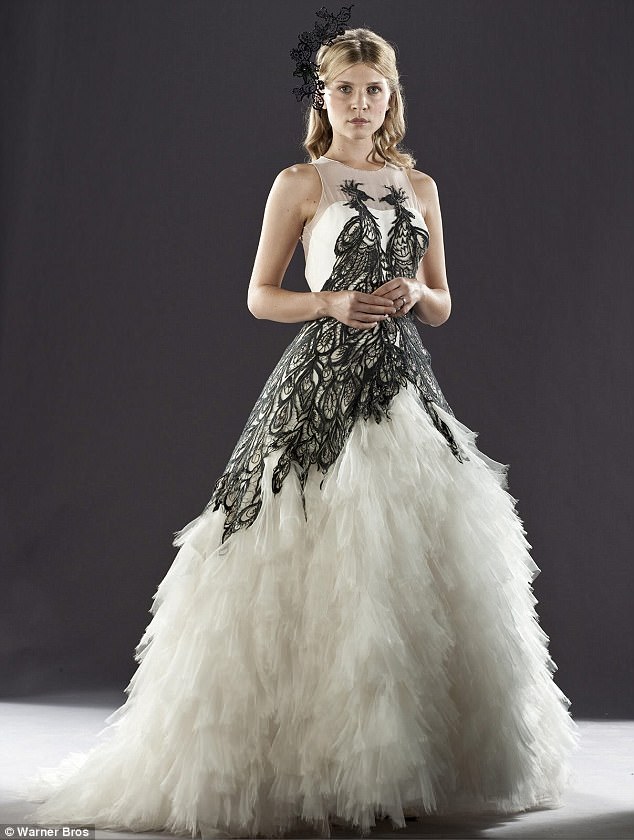 Couture: In Deathly Hallows Part 1, Fleur’s feathery wedding gown caught the eye of fashion fans due to its resemblance to an Alexander McQueen creation 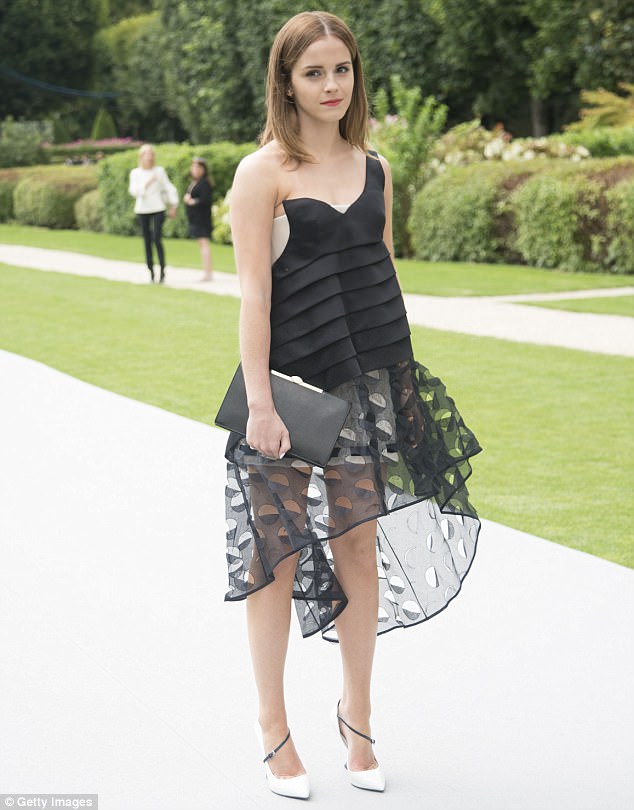 The real fashion darling: Hermion may not have been a Vogue reader, but Emma Watson certainly is 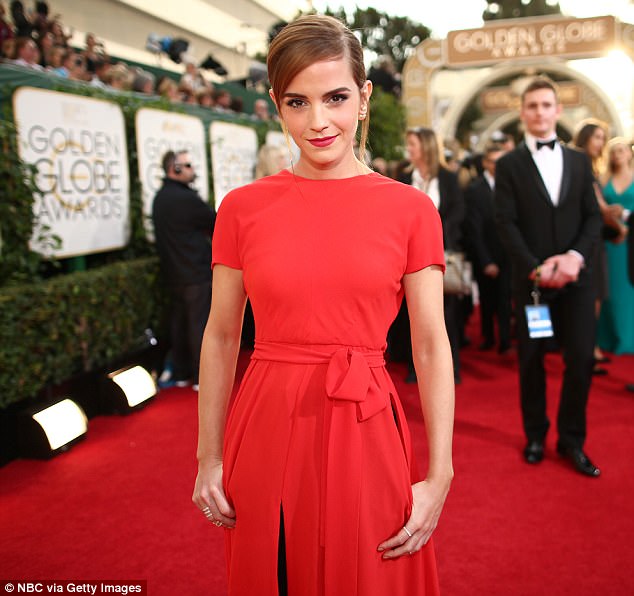 Love: A fan of the designer, she said of its former creative director: ‘I’m not paid to say this, but I think Raf Simons is a genius’

Interestingly, there’s one photo taken from the Yule Ball, though it doesn’t depict any of the female characters in daring Dior gowns. Instead, it shows Harry in his tux-like robes, Ron in his silly outdated ones, and Parvati in an edited-in Dior jacket.

Though no Dior designs actually appeared in the movies, nods to designer clothing weren’t entirely absent: In Harry Potter and the Deathly Hallows Part 1, Fleur Delacour gets married in a dress that looks remarkably like an Alexander McQueen design.

And, of course, actress Emma Watson has regularly worn Dior on the red carpet and attends the brand’s shows.

In 2015, she gushed about the former creative director, telling Vogue: ‘I’m not paid to say this, but I think Raf Simons is a genius.’