The casket of John Lewis has left Washington DC after lying in state for two days, and will now head to Atlanta for final funeral ceremonies.

The famed civil rights leader and congressman died on July 17, at the age of 80, following a battle with pancreatic cancer.

On Wednesday his casket flew out of the capital, headed for Atlanta – a city he had represented as congressman for 17 consecutive terms, and more than 30 years.

A member of the honor guard who collapsed in the 96 degree heat on Monday, awaiting his casket, was back on duty on Wednesday and resumed his position carrying the politician’s remains.

John Lewis’s casket on Wednesday left Washington DC. A member of the honor guard who fainted on Monday – wearing white, third from left – was back on duty on Wednesday 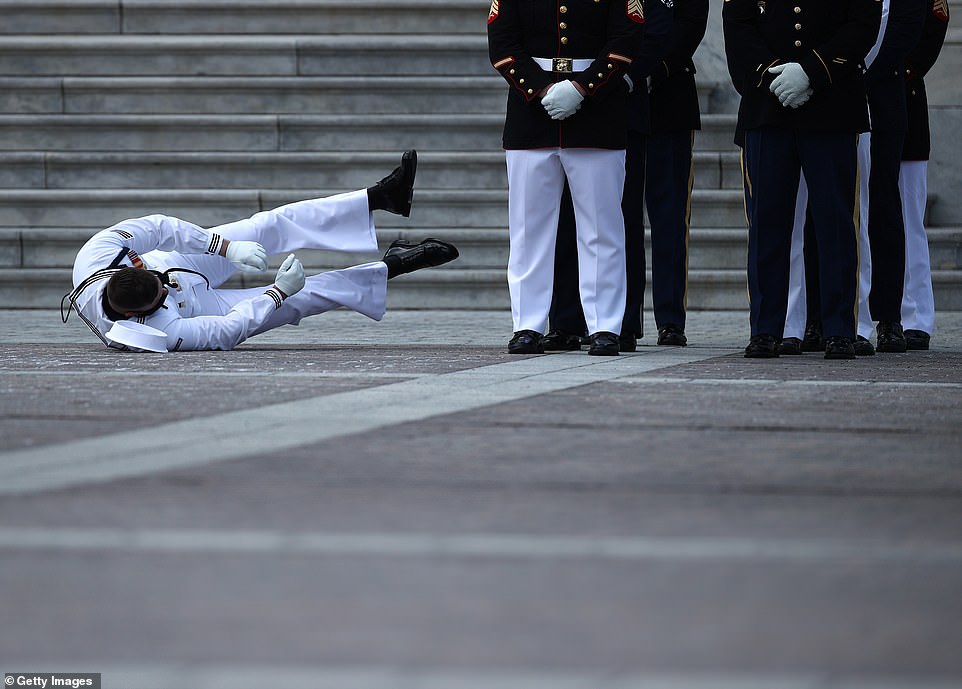 The unfortunate member of the honor guard keeled over Monday in the 96 degree heat, leaving a gap in the eight-man team 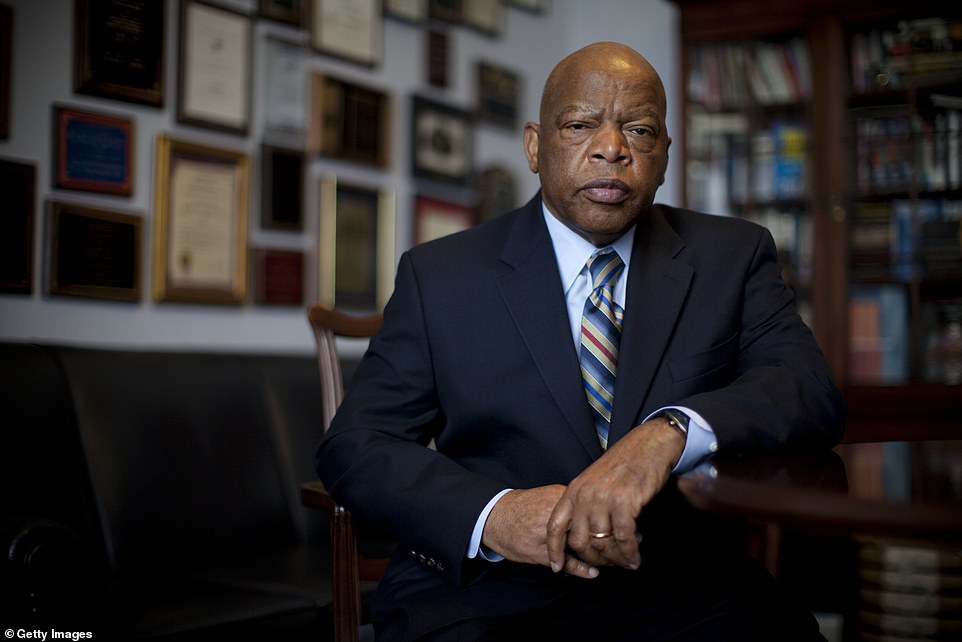 John Lewis, known as the conscience of Congress, died on July 17 at the age of 80, after a struggle with pancreatic cancer

Celebrations of his life began on Saturday in Troy, Alabama – the town where he was born.

On Sunday his body was then taken, one last time, across the Edmund Pettus Bridge in Selma, Alabama – the bridge he marched across with Martin Luther King Jr in March 1965.

The procession arrived in Washington DC on Monday.

Lewis, known as ‘the conscience of Congress’, traveled through the streets in a motorcade, stopping by the Lincoln Memorial and passing along Black Lives Matter Plaza, renamed in June.

His coffin was carried to the Capitol where he lay in state under the Rotunda – the first black politician to be granted the honor. 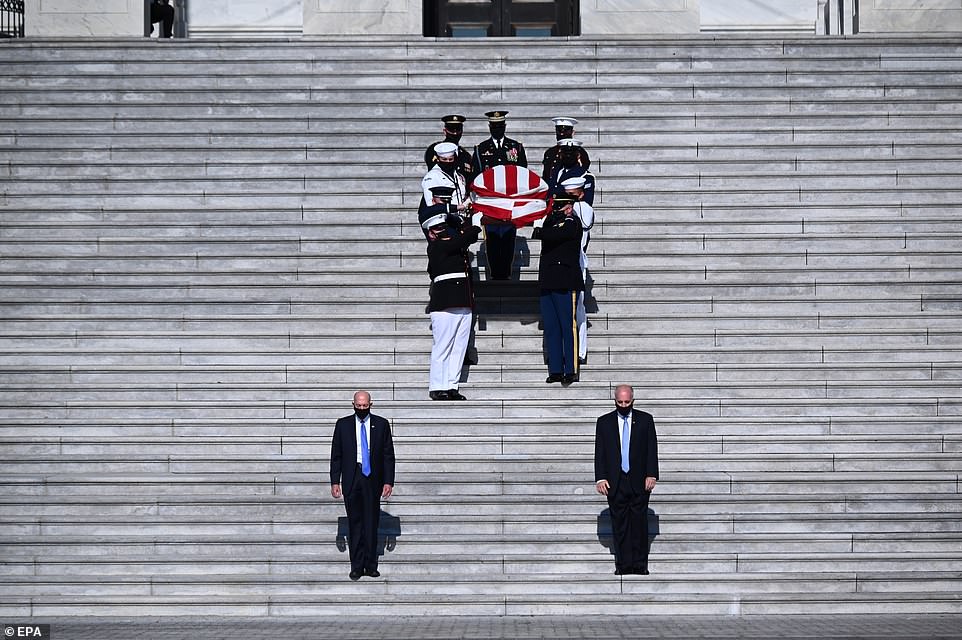 Lewis’s casket is carried out of the Capitol on Wednesday, after two days of commemorations to celebrate his life and work 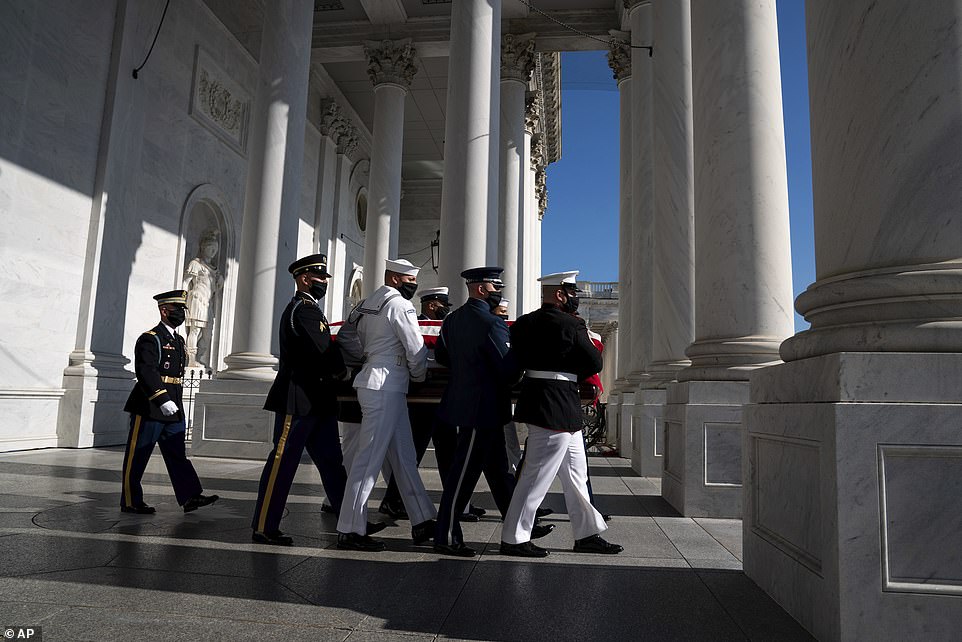 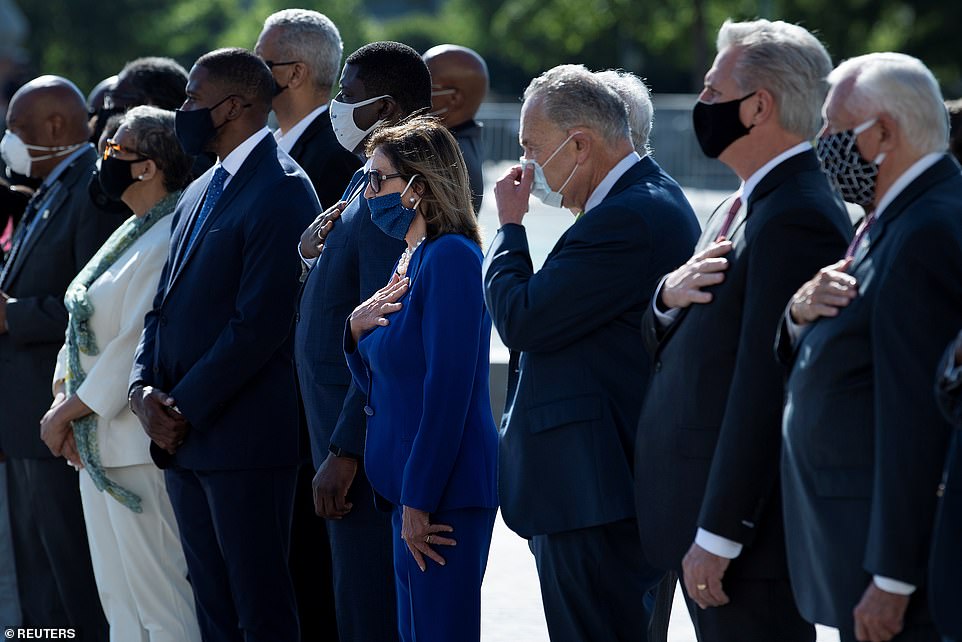 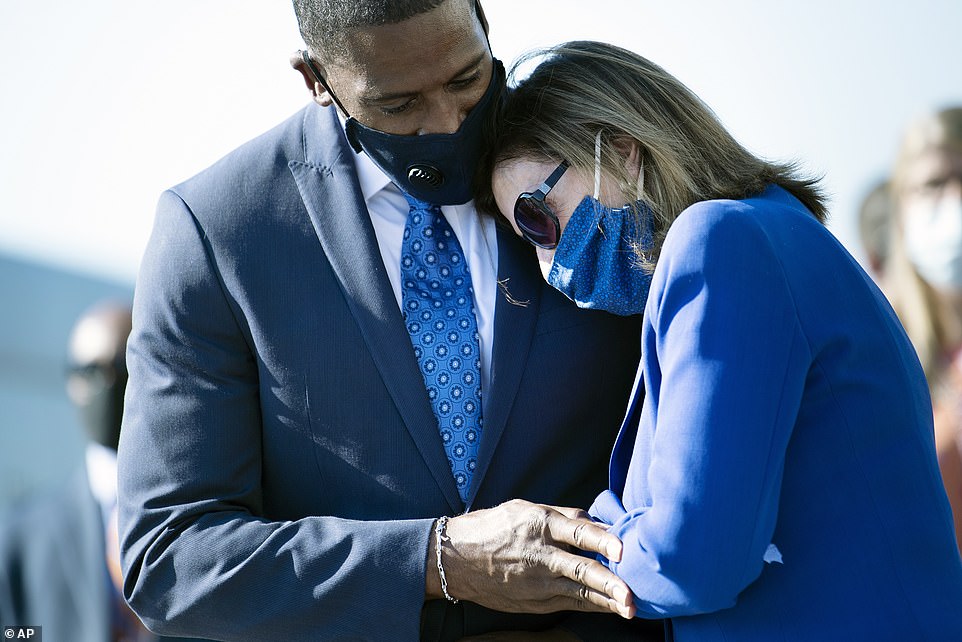 Pelosi is comforted by Michael Collins, Lewis’s long-serving chief of staff, on Wednesday as the casket left the Capitol 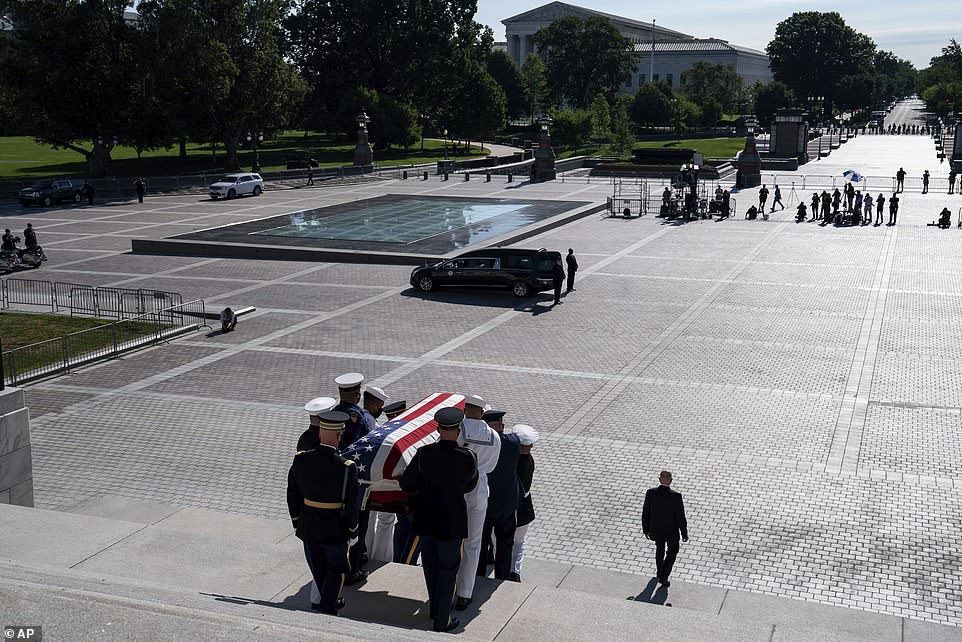 The casket was taken from the Capitol to the airport, where it was flown to Atlanta for a private funeral to be held Thursday

A service was held inside the Capitol on Monday afternoon, with Nancy Pelosi, speaker of the House, and Senate leader Mitch McConnell among those delivering eulogies.

Joe Biden, Mike Pence and other political figures paid their respects after the ceremony. Donald Trump was noticeable in his absence.

The casket was moved outside for a public viewing on Monday evening and throughout Tuesday.

Then, on Wednesday, it begun the final leg of the journey.

Ceremonies will conclude on Thursday, with a private funeral at the Ebenezer Baptist Church in Atlanta – a church with strong ties to the civil rights movement. 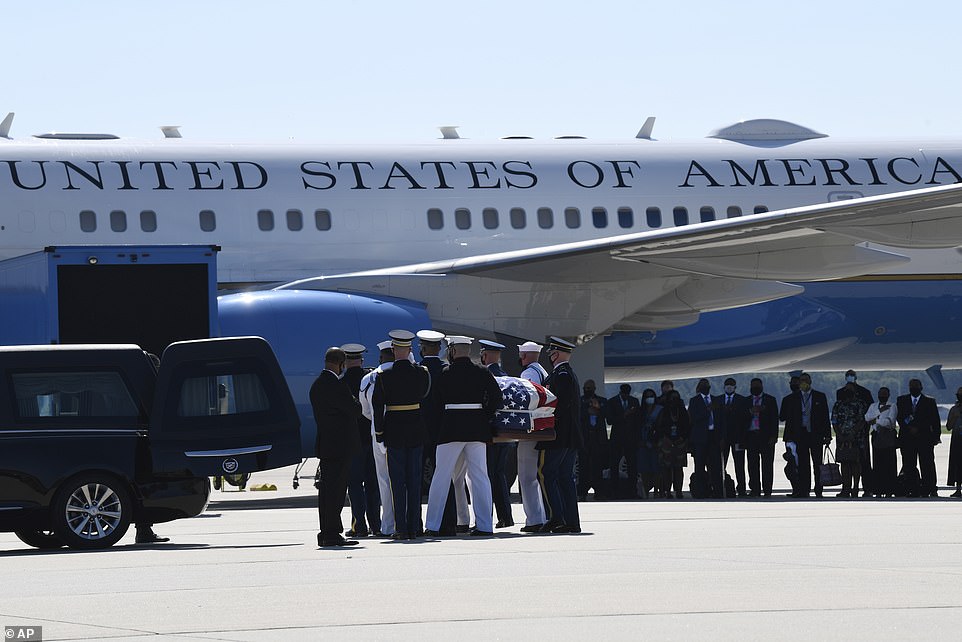 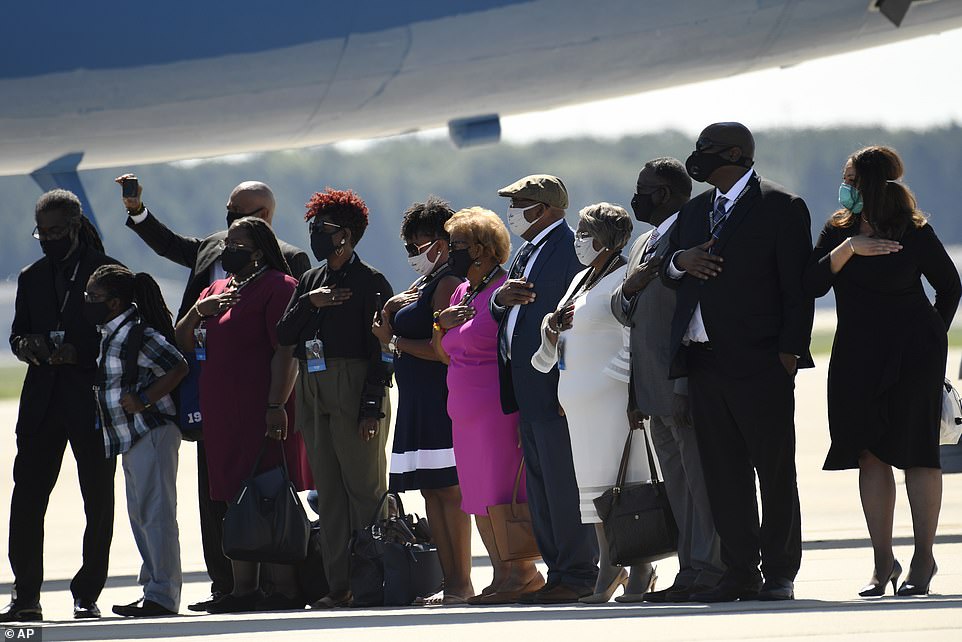