Guardiola insists Man City still have work to do against Schalke

‘We still have work to do’: Manchester City boss Pep Guardiola insists it is far from job done for his players as they prepare for Champions League last-16 second-leg against Schalke

Pep Guardiola has warned his Manchester City players their Champions League tie with Schalke remains on a knife-edge.

City came from behind to take control of the last-16 fixture with a last-gasp 3-2 victory in the first leg in Gelsenkirchen three weeks ago.

But after surprise losses for Real Madrid and Paris Saint-Germain in the competition last week, Guardiola points out nothing can be taken for granted in Tuesday’s return at the Etihad Stadium.

‘But a week ago we didn’t expect PSG would happen, or Real Madrid.

‘Every game is completely different but for people who say there is nothing to do – one sent off, one red card, one goal in the first minute, many things can happen in 90 minutes in this kind of competition.

‘I am sitting here thinking we still have work to do, that’s my feeling today.’

Premier League champions City are among the favourites for the competition but Guardiola continues to play down expectations by referring to the club’s lack of European pedigree.

City are competing in the Champions League for an eighth season in succession but their best effort remains their run to the semi-finals in 2016. They have not got beyond the quarter-finals under Guardiola.

The Spaniard, who won the competition twice as Barcelona boss, said: ‘We are teenagers in this competition, that’s what I feel, but we want to win it, we push ourselves. The best way is to feel this kind of pressure.

‘We have to dream and point as high as possible. At the same time we have to accept there are other teams thinking the same with a lot of quality and a lot of talent.’

City are without the suspended pair of defender Nicolas Otamendi and midfielder Fernandinho, although the latter is injured anyway. Aymeric Laporte and John Stones have both trained after recent injuries and could return but captain Vincent Kompany did not take part in an open session on Monday. 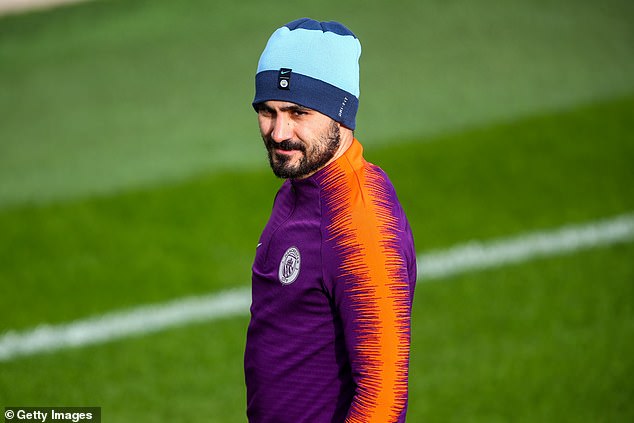 Midfielder Ilkay Gundogan feels City are capable of going deep in the competition – but they still have to prove it.

The German said: ‘If we want to be named as the best in Europe, we have to do it. It’s our ambition but in terms of how we play, we feel we are already quite good.

‘We have to prove it on results and, obviously, that means going as far as possible in the Champions League. That’s our target. That’s why we play.’