Luxury brand Gucci has sparked a heated debate over the representation of mental health within the fashion industry, after a model’s protest at the brand’s Milan Fashion Week show.

Ayesha Tan-Jones who was part of a line-up of models who walked down a conveyor belt in straitjackets, wrote on their hands ‘mental health is not fashion’, for an impromptu protest.

The non-binary model, who grew up near Wales, took to Instagram to reveal they had made a stand after their own mental health struggles, and history of depression, bipolar and anxiety within their family.

Gucci responded with a statement on Instagram, saying the straitjackets had been used as a symbol of ‘the most extreme version of a uniform dictated by society and those who control it’.

It stressed that the clothes were a ‘statement’ created for the show and will not go on sale, saying that  creative director Alessandro Michele designed the garments ‘to represent how through fashion, power is exercised over life, to eliminate self-expression’.

Earlier this year, the brand had to withdraw an $890 balaclava jumper that covered the chin and mouth, with cut-out red lips, after accusations it resembled blackface. 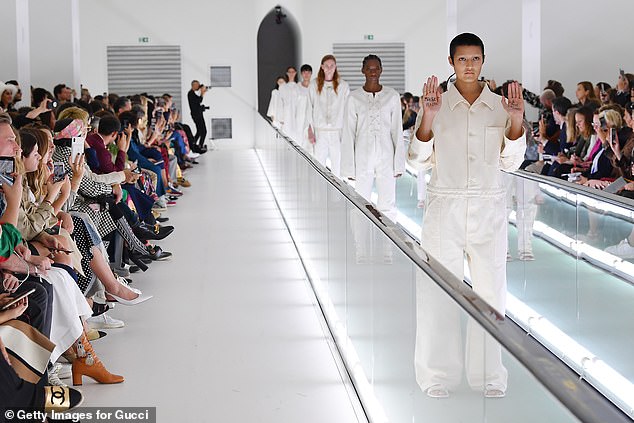 Posting on Instagram, Ayesha captioned a photograph from the show: ‘I chose to protest the Gucci S/S 2020 runway show as I believe, as many of my fellow models do, that the stigma around mental health must end.

’38-65 per cent of transgender individuals experience suicidal thoughts. And for black and brown communities, indigenous communities and Asian communities in the West, Mental health statistics are much higher compared to white adults.’ 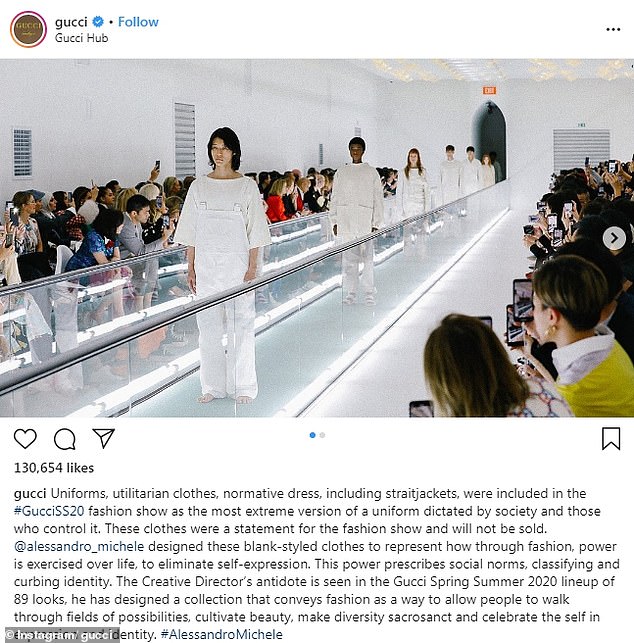 Creative Director Alessandro Michele, claims the brand sent utilitarian clothes down the catwalk to represent how society confines self-expression but Gucci can be the antidote

‘Strait jackets are are symbol of a cruel time in medicine when mental illness was not understood and people’s rights and liberties were taken away from them, while they were abused and tortured in the institution.

‘It’s in bad taste for Gucci to use imagery of strait jackets and outfits alluding to mental patients, while being rolled out on a conveyor belt as if a piece of factory meat’

Ayesha who is a founder of a self-defence class for women, binary and non-binary, POC and QTIBPOC, accused the brand of using mental health struggles to sell clothes without considering that sufferers may be offended.

A stream of social media users responded to Ayesha’s Instagram post to show their support, many said the protest was brave.

‘So powerful sister to have participated in the show and equally have the platform to call it out so publicly. There are many of us who grapple with calling out the system, being aware it will have ramifications.

‘But if we were to mobilise, we could hold the system accountable and push for better regulations in the conduct of work practices/ conditions..,’ one person wrote.

Another added: ‘You made a powerful statement/impact and championed the people who were voiceless. Thank you’

A stream of Instagram users responded to Ayesha’s post, praising their bravery in speaking out against Gucci’s show

Others were less impressed by Ayesha’s actions and questioned if the motivation behind the protest was genuine.

One person said: ‘Or could be you are using this to increase your own exposure without knowing the designer’s intent, motive, inspiration and heart? Shame on you’

Another wrote: ‘Hold up… so who then is allowed to speak about or publicly comment on mental health? Musicians interpret mental health in their art forms. Dancers do this too. As do writers, image makers, directors etc. And all of them do so and make money off it.

A third added: ‘Fashion as an art form deserves the right to use dystopian themes like films do. Seriously please stop attacking less popular forms of art lol especially since they’re not even selling those pieces’ 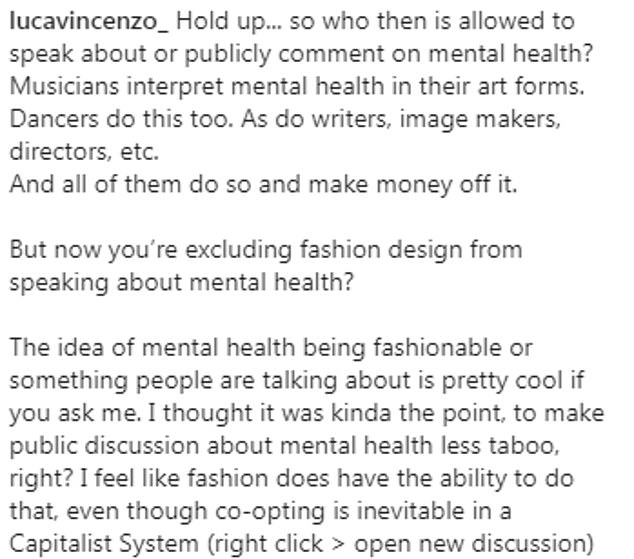