Typically, the ribcages seen on the runways at fashion week belong to the super-skinny models, pictured wearing revealing dresses and crop tops that show off the jutting bones.

They’re not usually one of the fashion accessories.

But when Gucci creative director Alessandro Michele debuted the design house’s Resort 2019 collection in the South of France this week, one model’s ‘ribcage’ wasn’t a part of her body at all, but a glitzy harness-like accessory worn on top of her clothes.

Skin and bones (and jewels)! A model at Gucci’s latest fashion show took to the runway wearing an odd accessory this week 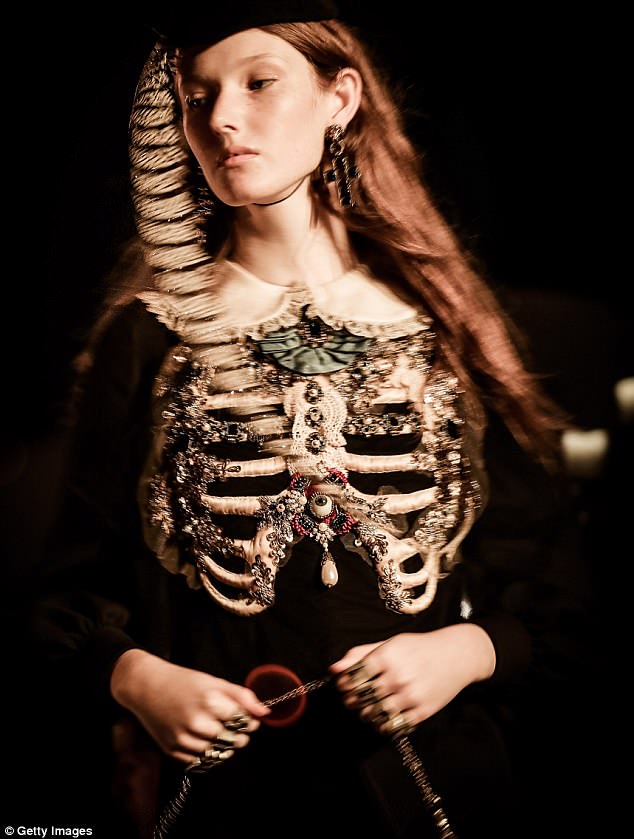 Calcium is so chic! She wore a replica of a ribcage outside of her dress 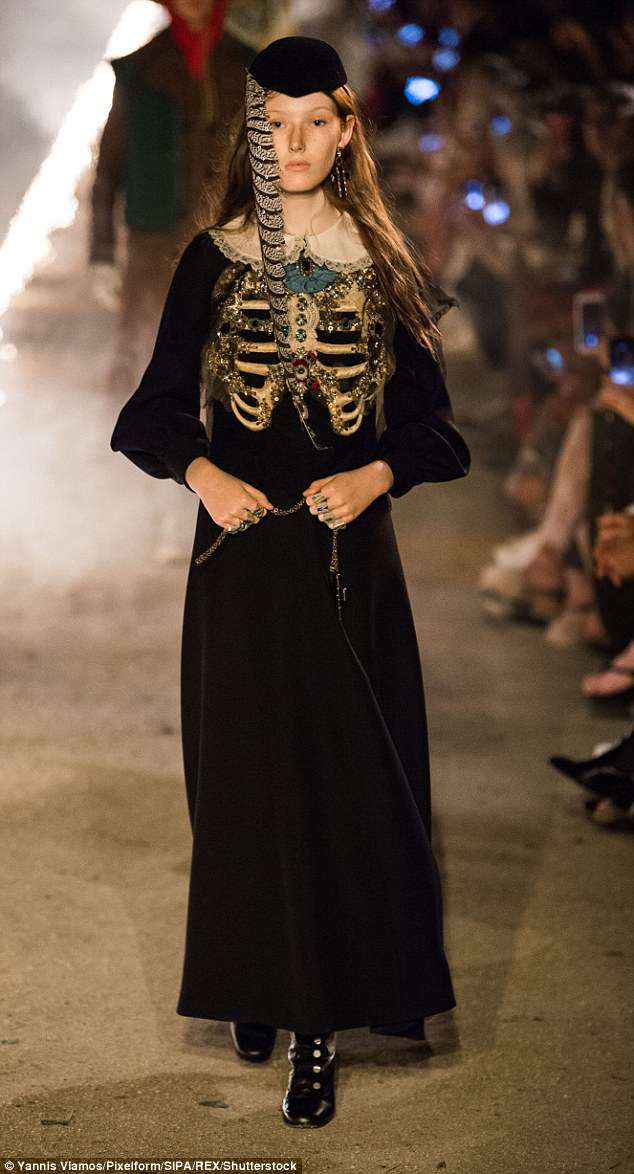 Fitting: The show was held at the Alyscamps burial ground in Arles, France, a spot lined with the sarcophagi of the Roman rulers 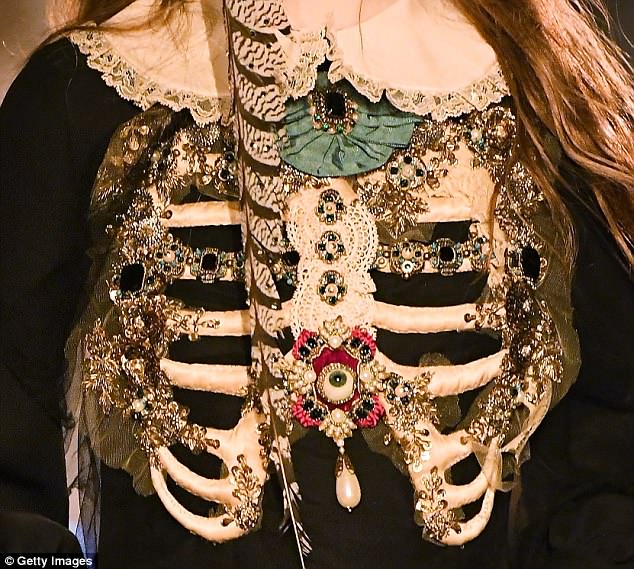 No bones about it: Creative director Alessandro Michele said the collection as a whole was an ossuary, a container or room made for storing skeletons and human remains

The show for the latest collection was, in a word, spooky. According to Vogue, it took place at the Alyscamps burial ground in Arles, France, a spot lined with the sarcophagi of the Roman rulers.

Models walked a runway that was aflame, creating a foreboding effect. But more unsettling than the dead bodies that were literally all around were some of the accessories — in particular, a realistic ribcage worn by a female model in the first half of the show.

Made of an ivory material that looked like actual bone, the ribcage was worn outside of the model’s black dress, but artfully underneath the collar.

But this wasn’t some simple skeleton — after all, this is Gucci. The bone structure was covered in gilded details, pearls, gems, and lace. 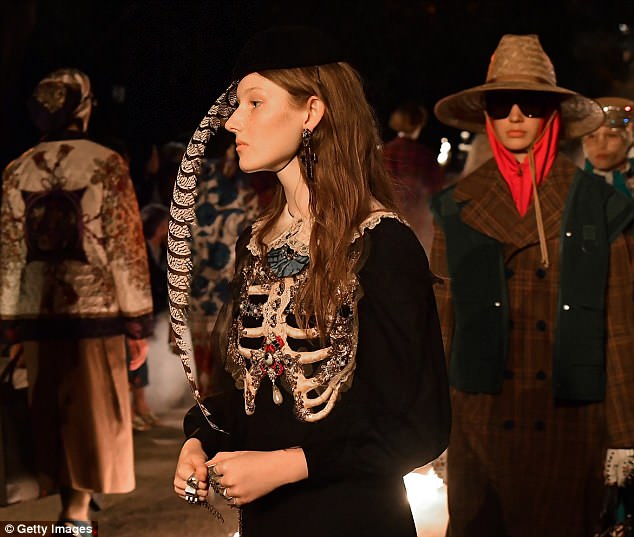 We see you! The ribcage was covered in jewels, pearls, and even a fake eyeball 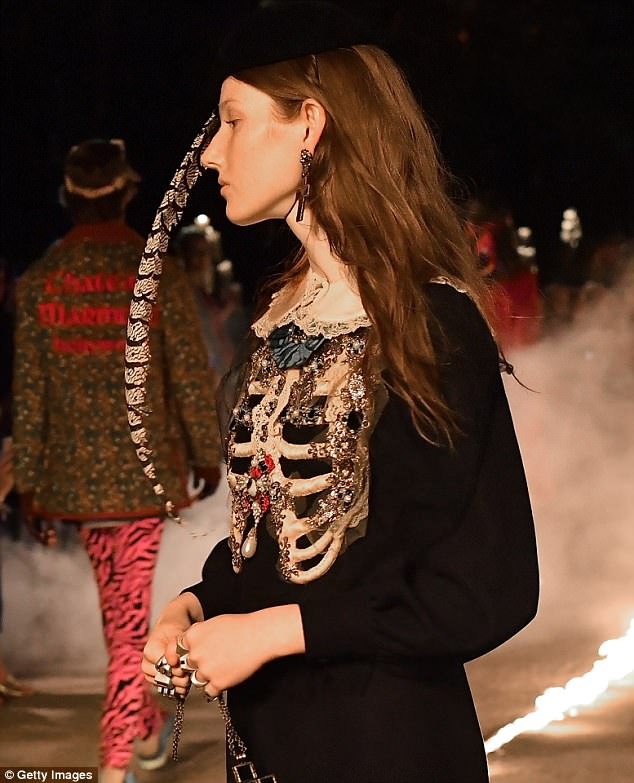 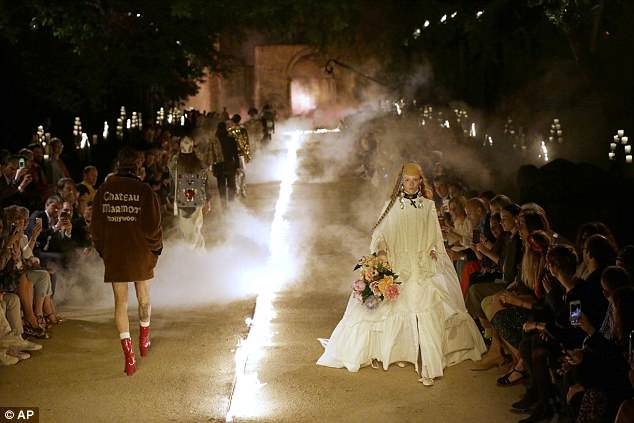 Hot, hot, hot! The runway was also on fire, setting a dramatic scene 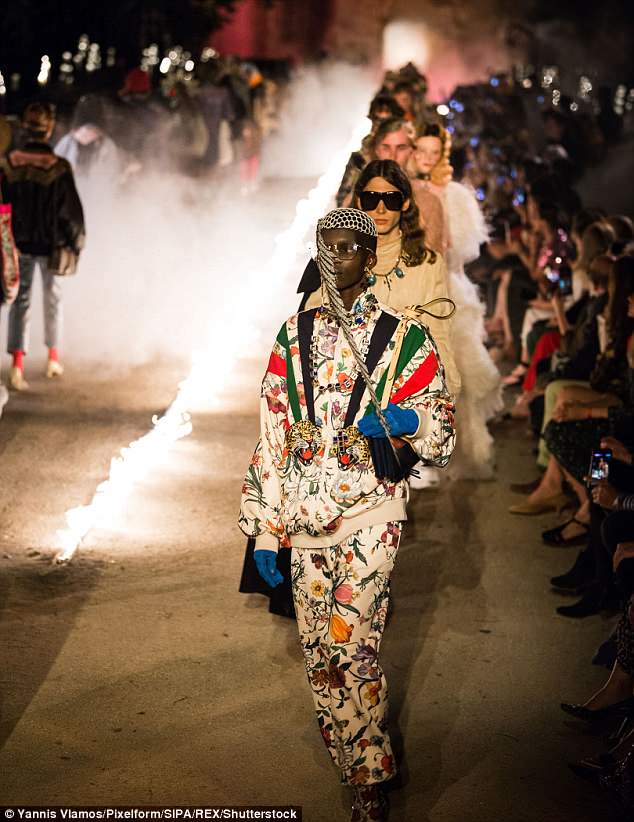 Dear God, what is this? There was plenty of religious symbolism in the new collection

And in the middle, creepiest of all, was a gleaming eyeball.

On Instagram, the brand explained the the inspiration for the collection as a whole was an ossuary, a container or room made for storing skeletons and human remains. In this case, the ossuary was where cardinals were laid to rest.

‘This idea is that everything that is linked to the afterlife is accompanied by something of maximum beauty,’ Michele said.

The religious aspect of that inspiration was apparent throughout the collection in details like crosses and rosaries, but Michele is known for pushing limits and working outside the expected — so the actual ‘skeleton’ part came into play, too.

This isn’t the first show Michele has put on that pushed the limits. The Fall/Winter 2018, held in Milan in February was set in a space designed to look like an operating room. 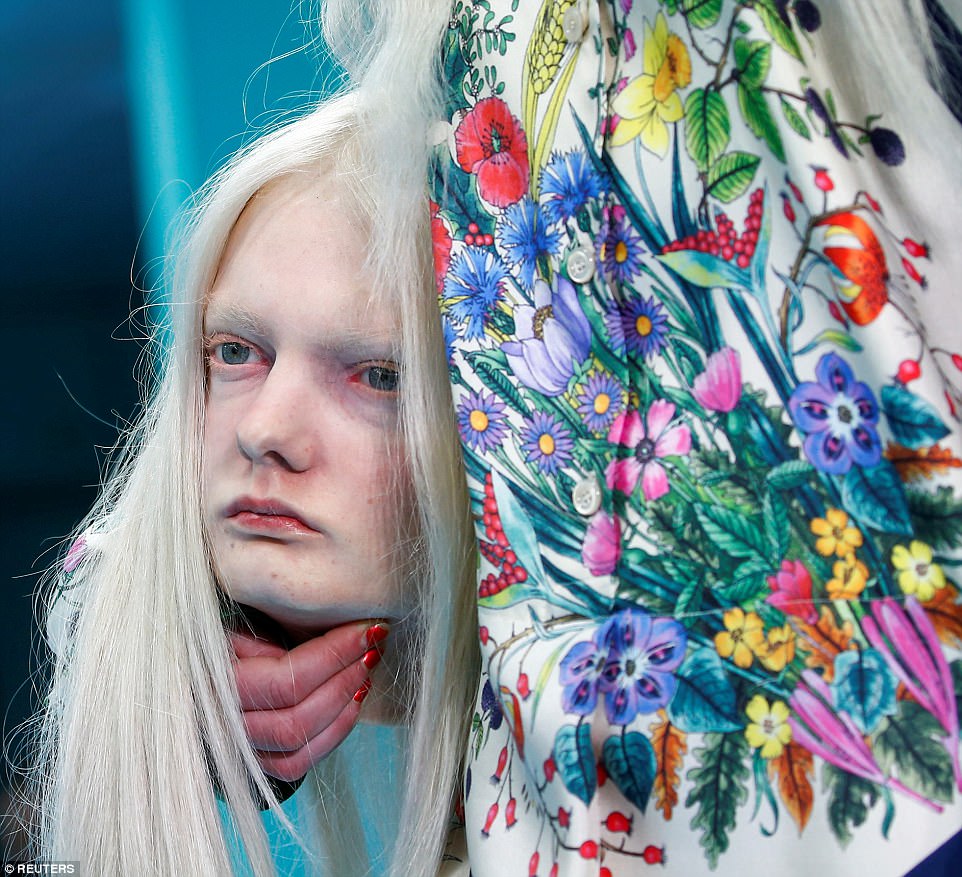 Horrifying: At a Gucci show in February, some models carried replicas of their own heads 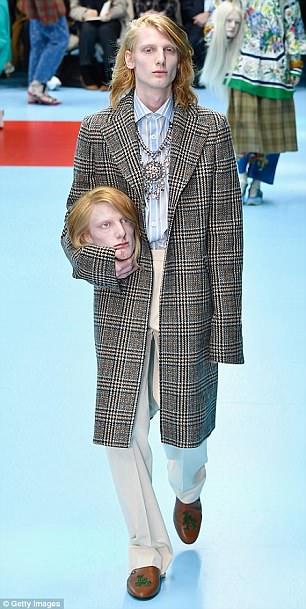 Off his rocker? The creepy ‘accessory’ bewildered people after pictures hit the internet 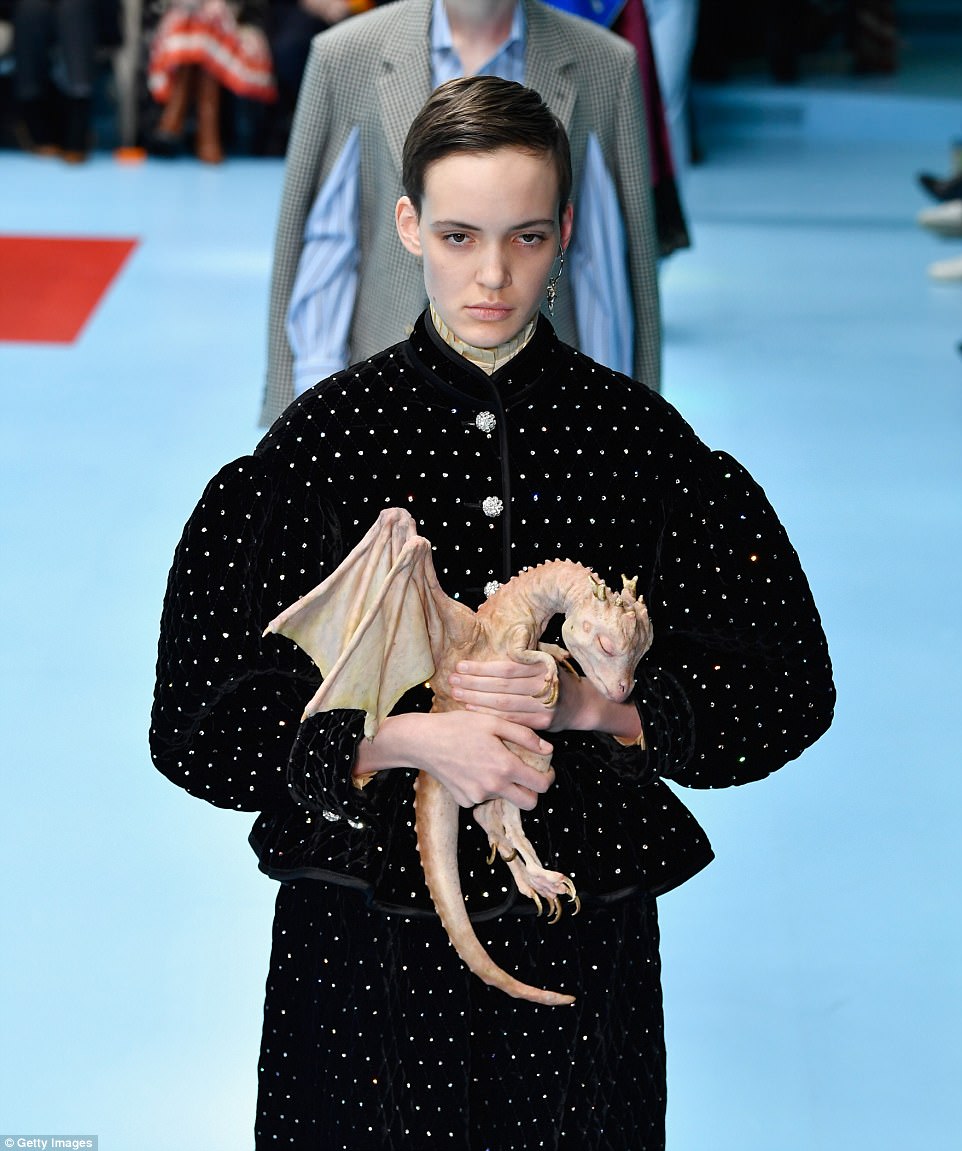 It included models walking down the runway holding eerily realistic replicas of their own heads, as well as dragons, snakes, and chameleons.

‘I mean I realize that some top models are head hunted for shows…but this is ridiculous!’ one Twitter user joked in response. ‘Fashion show or horror show….way too creepy!’

And Gucci’s Fall 2017 starred models dressed as aliens. A press release at the time explained, ‘Human characters interact with extra-terrestrial creatures and dinosaurs on Earth and are then beamed up to surreal, psychedelic outer space landscapes and trippy spaceship interiors, creating wild and fantastical compositions.’