Gucci’s gone gagga! But as profits soar to £1.3bn, is there a method to their fashion madness?

The clothes paraded on catwalks are often created by designers as showpieces to garner attention from the world’s media. They rarely go into production but showcase artistic direction.

When Gucci sent a string of utilitarian garments, including straitjackets, down the runway in Milan at the weekend, model Ayesha Tan-Jones held her palms to the audience to reveal a handwritten protest message, saying ‘mental health is not fashion’.

Fashion designers have long turned to a variety of sources for inspiration: from Renaissance art to Stanley Kubrick films, a rich tapestry of influences has found its way in to our wardrobes. 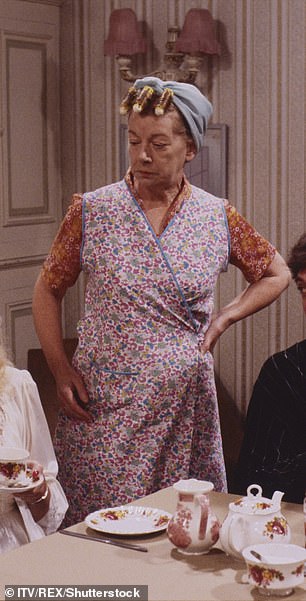 Gucci’s high-end house coat (left), a designer take on the cleaner’s overall for the princely sum of £2,050? Julie Goodyear (as Bet Lynch) in Coronation Street’ 1985 (right)

And, while Gucci designer Alessandro Michele (pronounced Me-kay-lay) has been unveiling his Spring 2020 collection at Milan Fashion Week, his winter designs have been hitting boutiques around the globe, seemingly featuring Hilda Ogden as his muse.

How else to explain the high-end house coat, a designer take on the cleaner’s overall for the princely sum of £2,050?

It is, perhaps, the ultimate case of the fashion industry having the last laugh, pushing the boundaries of sartorial irony even further in a bid to sell more clothes at ever-increasing prices. For the designer brand’s most recent pre-tax profits hit a staggering £1.3 billion. 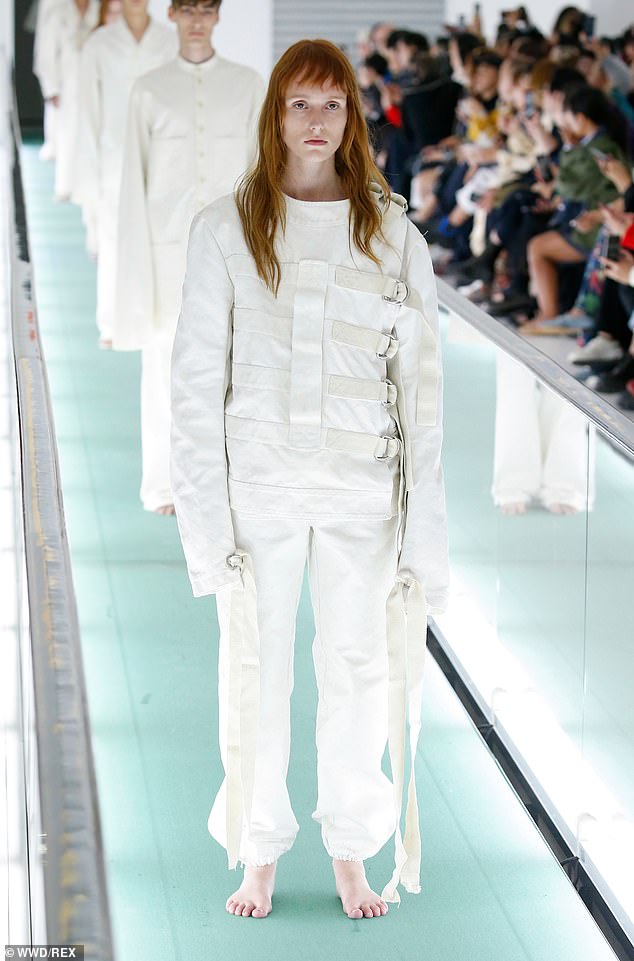 Straitjacket, priceless: This bizarre ensemble will not be on sale after a backlash when it featured on the catwalk at Milan Fashion Week

Michele, 47, has been feted for bringing a vibrant aesthetic to the Italian house. A flamboyant, hirsute character, he is the most passionate advocate of his own sartorial vision, dressing in a mix of clashing prints and exotic colours.

He has masterminded a meteoric turnaround for the label founded as a luxury saddler in 1921 by Guccio Gucci, a former bellboy at the London Savoy. 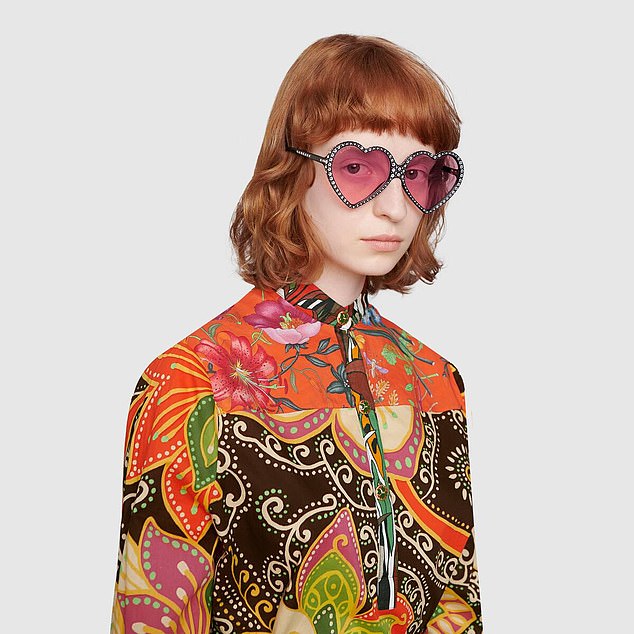 Elton John specs, £910 While Elton John may be an icon, not many women are looking to emulate his specs appeal, especially at this price 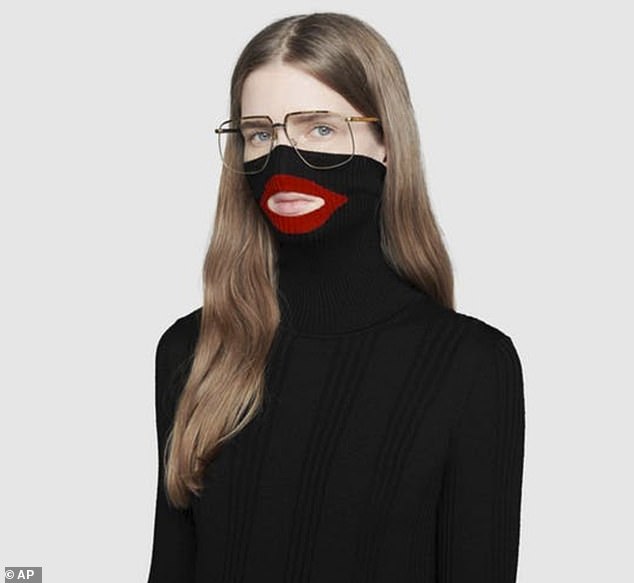 And while he has hit the headlines for his more farcical showpieces, it is his nose for creating desirable and highly commercial iterations of Gucci classics that has boosted the brand.

When he took the snaffle-trimmed calfskin loafer, for many years a status symbol among the wealthy elite, and made a backless, fur-lined version, every fashionista worth her Instagram account bought a pair.

That the Duchess of Cambridge is now a fan, wearing one of the brand’s pussy-bow blouses earlier this year, shows just how its celebrity star is once again in the ascendant.

Print Shirt, £490, (right) You might roar with laughter when you have to pay nearly £500 for this tiger-print shirt; Statement dress, £3,300 Not sure what statement this dress is making, but it is certainly bold! 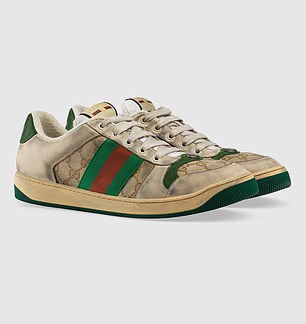 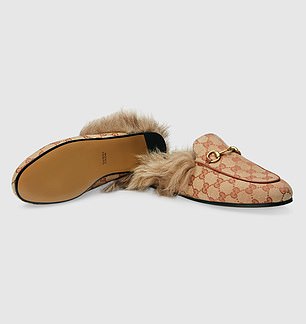 The backless, fur-lined, calf skin loafer (right).  Dirty trainers, £615, (left): It’s impossible to keep your white trainers pristine for long. So Gucci have cut out the middle man with these dirty trainers 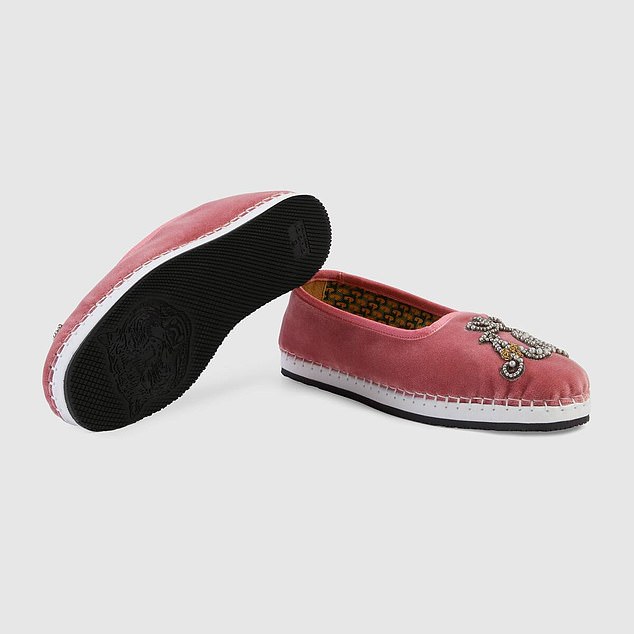 Granny Slippers, £705, Velvet loafers may cut a dash … as long as you have a penchant for granny-chic

Credit Suisse estimates Gucci’s revenue this year will grow to £8.5 billion, making them one of the world’s largest luxury goods brands.

So while many of Michele’s ‘ghastly Gucci’ creations are deemed a joke, who is laughing at whom? 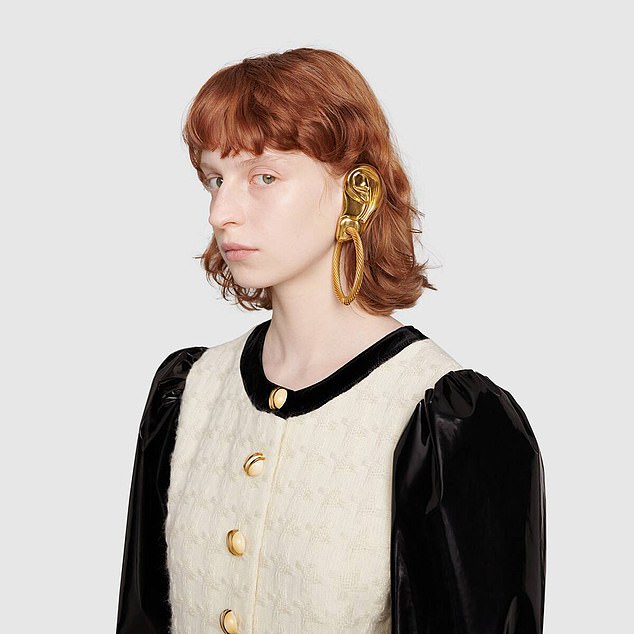