Guests tie sheets together in bid to escape Kabul hotel

Desperate guests tied bedsheets together to flee from a Kabul hotel under-siege by Taliban gunmen after six people were shot during a 12-hour rampage.

Dramatic footage showed people climbing down from balconies on the six-storey block as black smoke billowed out of rooms.

A guest fleeing the Taliban gunmen desperately tries to escape by using bedsheets to lower himself off his balcony at the Intercontinental Hotel in Kabul, Afghanistan 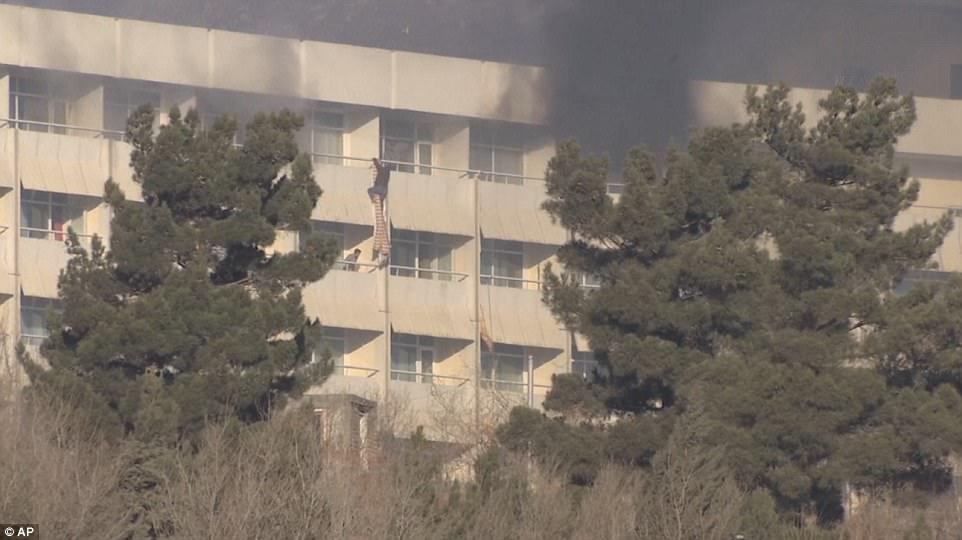 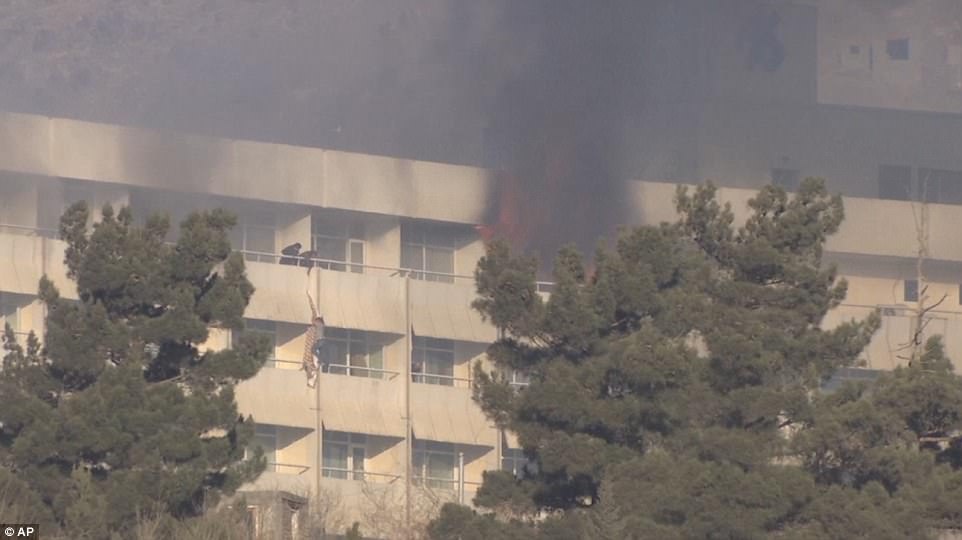 Black smoke billows out of a window as two guests watch other a man climbing down a bedsheet rope in the hotel, nestled on a hilltop on the Afghan capital

Four Taliban gunmen, armed with light weapons and rocket-propelled grenades, burst into the hotel and opened fire on guests and staff, killing five Afghans and one foreigner, before taking dozens of people hostage.

The siege was eventually stopped after special forces were lowered by helicopters onto the roof during the night.

‘The body of the foreigner, a woman, was recovered from the sixth floor as the last attacker was being killed,’ he added.

An official with Afghanistan’s spy agency put the number of wounded at eight, while the interior ministry said six.

The Taliban claimed responsibility for the latest assault in the war-torn capital via an email from spokesman Zabiullah Mujahid. The interior ministry had earlier blamed the Taliban-affiliated Haqqani network. 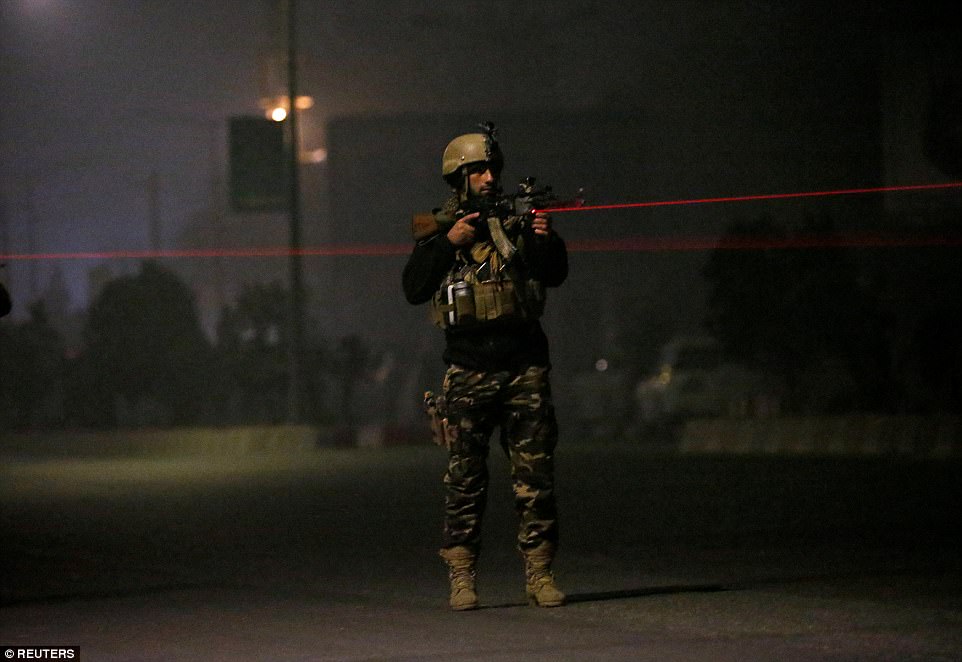 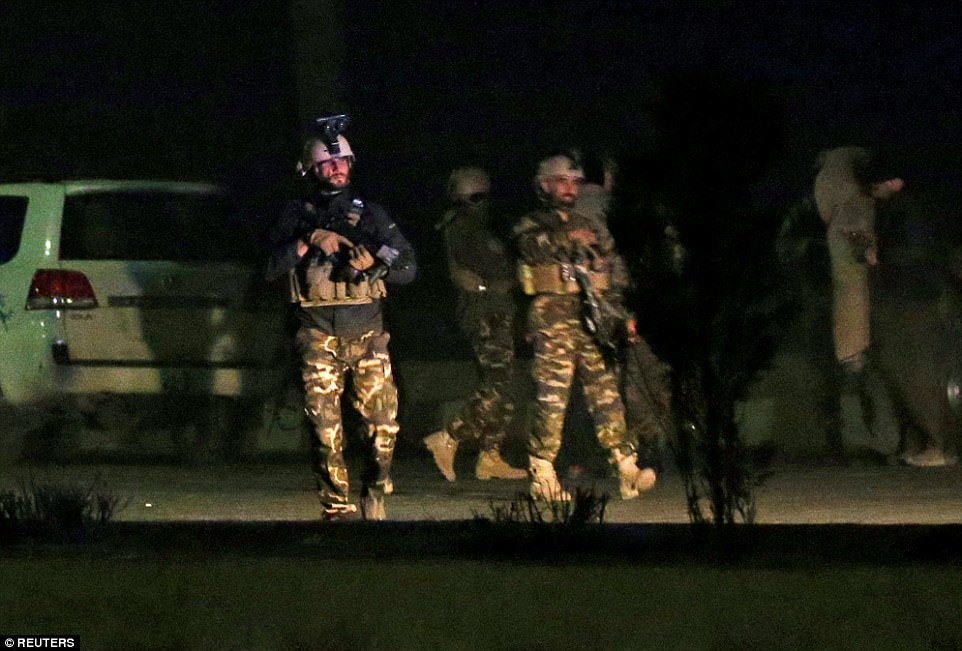 It followed security warnings in recent days to avoid hotels and other locations frequented by foreigners. Kabul has become one of the deadliest places in Afghanistan for civilians, with the Taliban and the Islamic State group both stepping up attacks.

It was not clear how many people had been inside the hotel.

During the siege, a guest hiding in a room said he could hear gunfire inside the building, where dozens of people attending an information technology conference on Sunday were staying.

‘I don’t know if the attackers are inside the hotel but I can hear gunfire from somewhere near the first floor,’ the man, who did not want to be named,  told AFP by telephone.

‘We are hiding in our rooms. I beg the security forces to rescue us as soon as possible before they reach and kill us.’

His phone has been switched off since then. 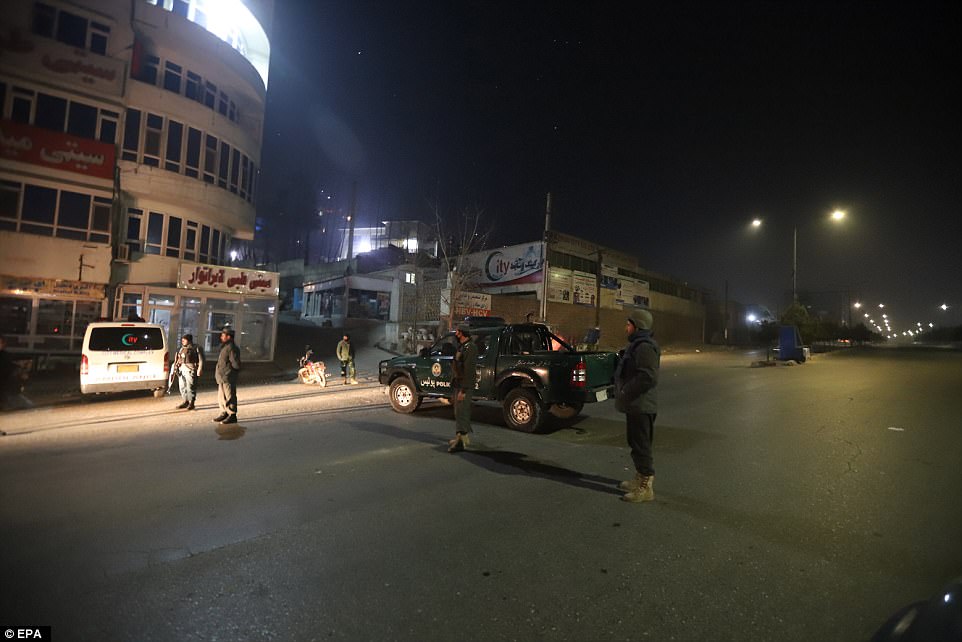 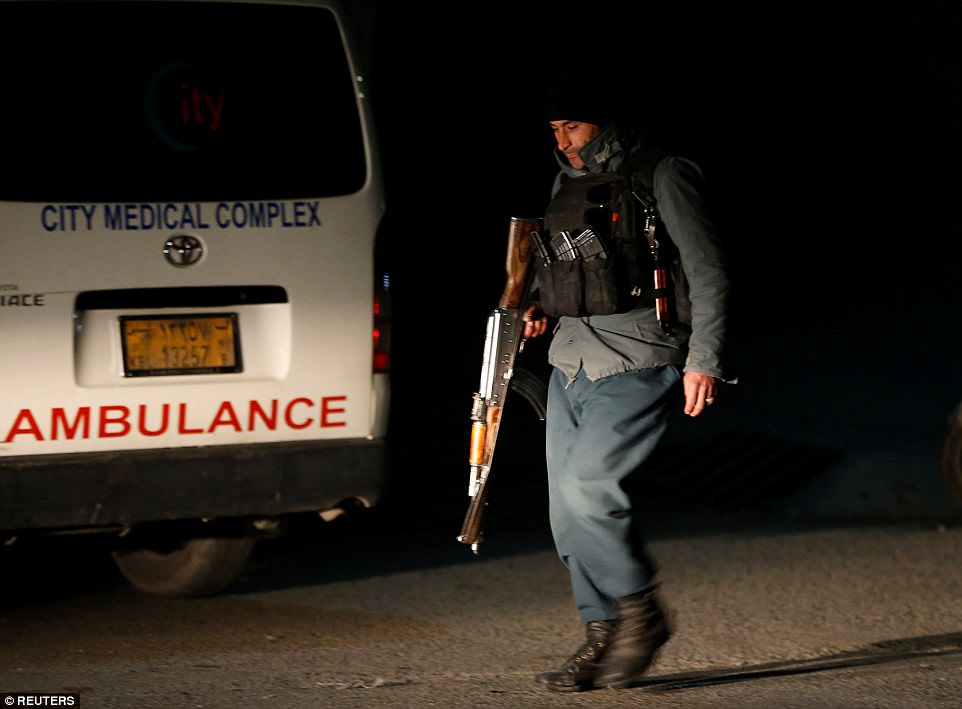 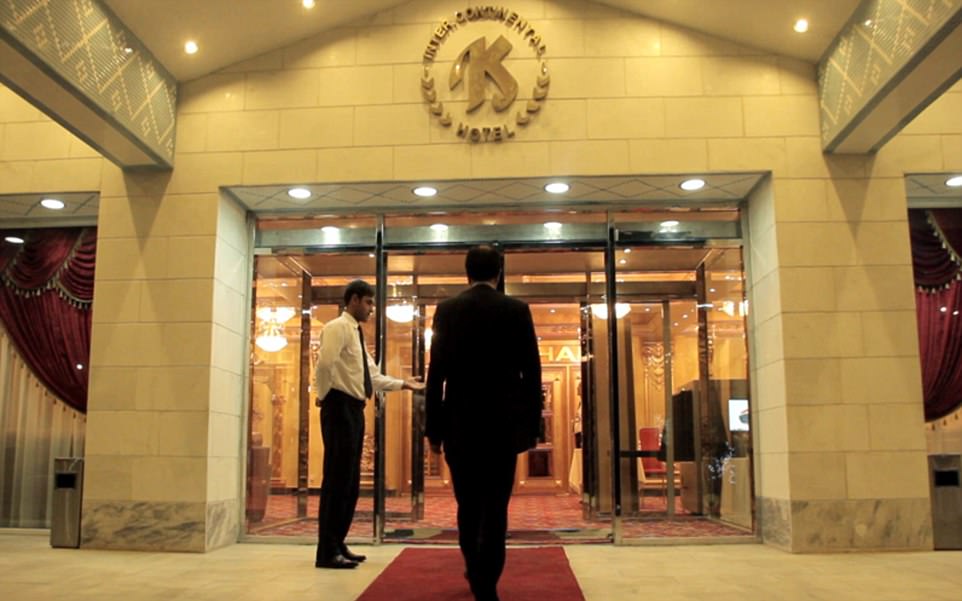 The hotel (pictured), one of two main luxury resorts in the city, was previously attacked by Taliban fighters in 2011

Afghan Telecom regional director Aziz Tayeb, who was attending the IT conference, saw the attackers enter the hotel.

He said: ‘Everything became chaotic in a moment. I hid behind a pillar and I saw people who were enjoying themselves a second ago screaming and fleeing like crazy, and some of them falling down, hit by bullets.’

Local resident Abdul Sattar said he had spoken by phone to friends who are hotel staff and had been trapped inside.

‘Suddenly [militants] attacked the dinner gathering… they broke into the rooms, took some people hostage and they opened fire on some of them’, he added.

Security in Kabul has been ramped up since May 31 when a massive truck bomb killed some 150 people and wounded around 400 – mostly civilians.

But ISIS and the resurgent Taliban are both scaling up their assaults on the city, with multiple devastating attacks in recent weeks.

The attack on the Intercontinental, which is not part of the global InterContinental chain, was just one of several bloody assaults this weekend.

In a village in the northern province of Balkh, Taliban militants went from house to house in the middle of the night, pulling police from their homes and shooting them dead. 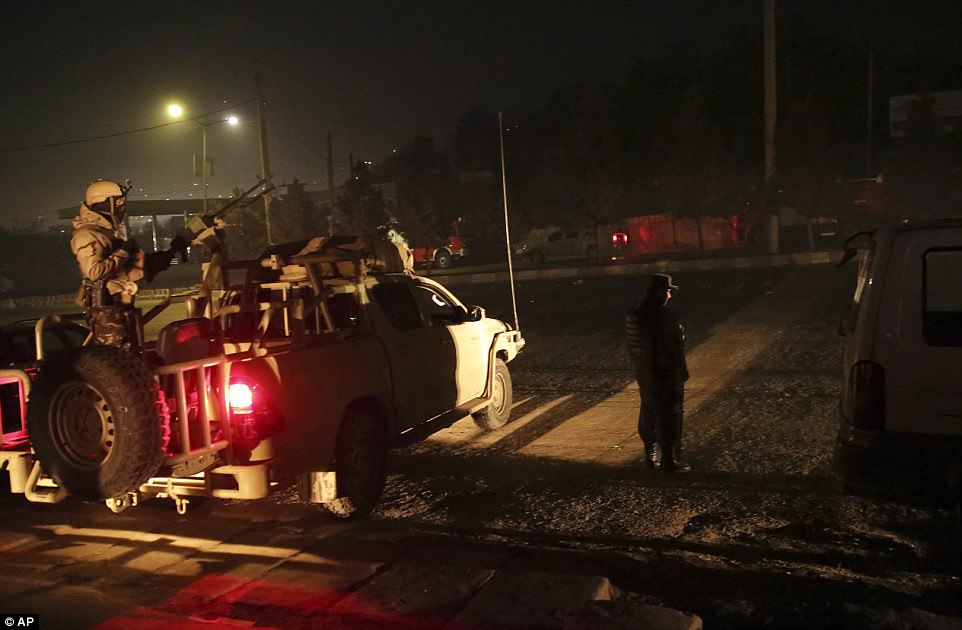 The Intercontinental Hotel in Kabul, Afghanistan was under siege by the gunmen for 12 hours, with six people killed (pictured, Afghan security forces at the scene) 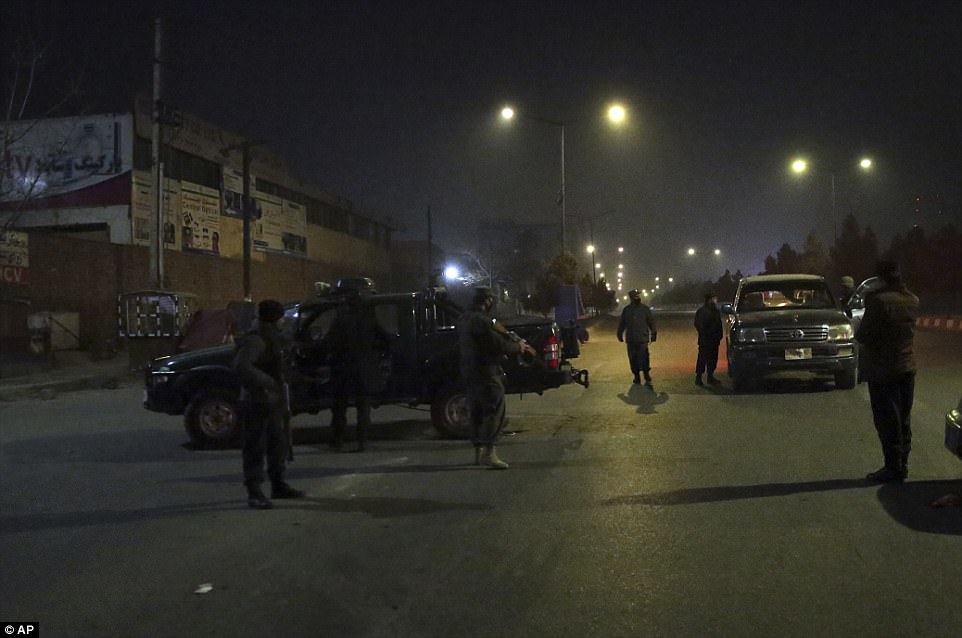 There were foreign visitors among the hotel guests, but it is not clear whether they included any UK residents (pictured, Afghan security forces form a cordon on the roads around the building 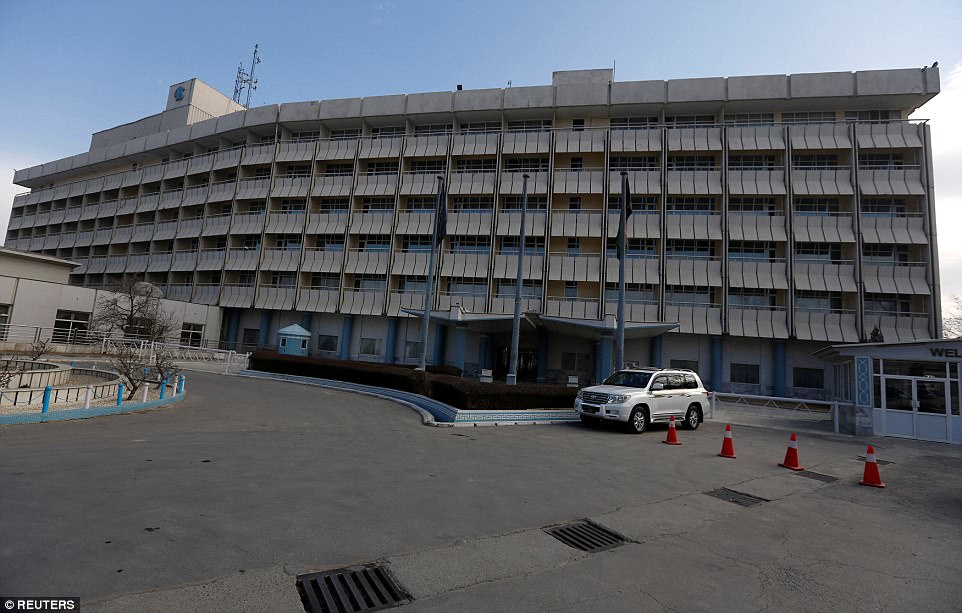 The five-star Intercontinental Hotel in the Afghan capital of Kabul, which is often used for conferences

In Herat in the west at least eight civilians were killed when a car hit a Taliban-planted roadside mine, officials there said.

The last major attack on a high-end hotel in Kabul was in March 2014 when four teenage gunmen raided the Serena, killing nine people including AFP journalist Sardar Ahmad.

The overnight siege is not the first time the Intercontinental has been targeted: in 2011 a suicide attack claimed by the Taliban killed 21 people there, including 10 civilians.

Even before the attack was over Sunday, authorities were questioning how the attackers got past the hotel’s security, which was taken over by a private company three weeks ago, said Najib Danish, another interior ministry spokesman.

‘We will investigate it,’ he said.

A hotel employee  said that as he fled the staff living quarters in a building next to the hotel he saw the new security guards running for their lives.

‘They didn’t do anything, they didn’t attack. They had no experience.’