Gun sales are expected to rise during the upcoming holidays following multiple mass shootings and ahead of proposed firearm regulations.

In October, nearly 1.2 million firearms were sold in the United States, a 10.8 per cent increase from October 2018, according to data from Small Arms Analytics.

Just a month before that in September, about 1.1 million firearms were sold in the US, a 10.7 per cent increase from September 2018.

The number of background checks for 2019 may break the one-year record of 27.5 million as the holiday season approaches, according to USA Today, despite multiple mass shootings across the country since August.

According to the FBI’s National Instant Criminal Background Check System, the number of monthly checks has not fallen below 2 million this year.

But the highest number of background checks ever recorded by the FBI was on Black Friday 2017, followed by the Black Fridays in 2016 then 2015.

Experts also believe that gun sales will continue to increase as the 2020 presidential election approaches.

Democrats, including presidential candidates, have continued to push for stricter gun laws, especially after two mass shootings occurred in El Paso, Texas, and Dayton, Ohio, within 24 hours. A total of 31 people were killed in a matter of hours.

Before dropping out of the presidential race, Beto O’Rourke angered gun enthusiasts in Houston when asked if he proposed stopping the ownership of assault rifles.

Some of the biggest spikes in background check for potential gun purchases came in August and September following the shootings in El Paso, Texas; Odessa, Texas; and Dayton, Ohio.

The spikes in background checks were fueled by fears that lawmakers would tighten gun laws. 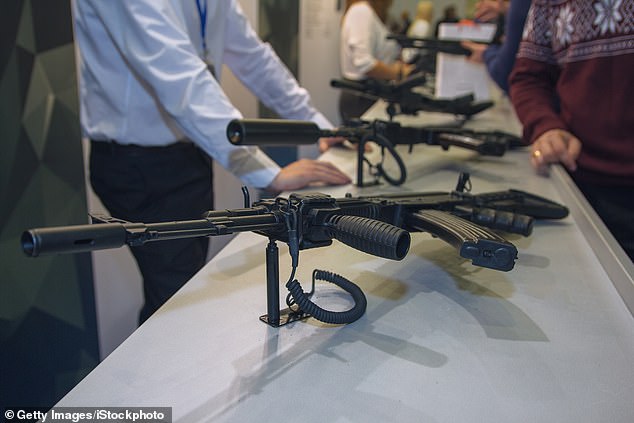 ‘People respond to what they perceive as threats to their (Second Amendment) rights, and this has been going on since August,’ Larry Keane, general counsel for the firearms industry trade group National Shooting Sports Foundation, told USA Today.

In August, a bipartisan proposal to encourage states to adopt ‘red flag’ laws to take guns away from people believed to be a danger to themselves or others gained support among Republicans.

The plan would create a federal grant program to encourage states to implement the laws. The measure would be the first major federal gun control law since the 1994 assault weapons ban, which expired in 2004.

But it will go nowhere near as far as Democrats are demanding, with Nancy Pelosi and Chuck Schumer demanding a Senate vote on a universal background checks bill.

The ‘red flag’ laws already apply in at least 15 states and the District of Columbia, but the measure would make them likely to go nationwide.

The bipartisan law was proposed by Sen Lindsey Graham, the Republican from South Carolina, and Sen Richard Blumenthal, the Democrat from Connecticut.

Meanwhile, there have been a string of proposals across the US designed to combat tighter gun laws imposed at higher levels.

Counties in Illinois, such as Effingham County, began the drive to challenge stricter gun legislation when they passed resolutions last year.

Earlier this month Mohave County in Arizona unanimously passed a similar resolution that it could not ‘unconstitutionally infringe on the people’s right to keep and bear arms’.

Texas counties have also approved such resolutions, as had a rural California city that passed its own version in the summer.