The Welcome To The Jungle legends will make their debut at the iconic festival series on June 30 as part of the outdoor London event’s 10th anniversary.

Back! Guns N’ Roses are headlining BST Hyde Park for the first time in the summer as part of the event’s 10th anniversary – Axl Rose, left, and Slash, right, pictured in 2019)

Tickets will go on general sale on Wednesday at 10am GMT, with the first presale coming to American Express Cardmembers on Friday at 9am GMT.

Reflecting on her own appearance, Hollaback Girl hitmaker Gwen admitted the UK shows – on June 24 and 25 – will be a special experience for her. 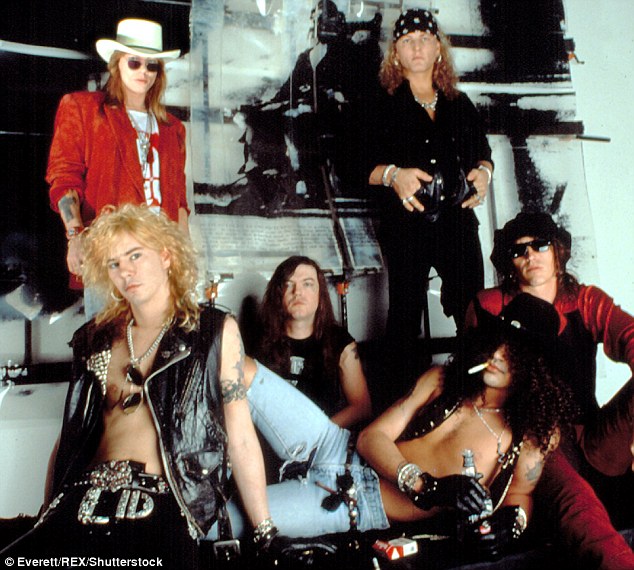 Touring together? The band, pictured in 1990, will make their debut at the iconic festival series on June 30 as part of the outdoor London event’s 10th anniversary

She said: ‘I don’t think I would ever be me without the incredible musical influences of the UK. I am so excited to be back! This is going to be an amazing show.’

Pink added: ‘It’s been a long three years and I’ve missed live music so so much…. So it’s finally time! I am so excited to get back to the UK and Europe to sing, cry, sweat and make new memories with my friends.

‘It’s going to be magical!’

More special guests for all shows will be confirmed in due course, while Take That – made up of Gary Barlow, Howard Donald and Mark Owen – are looking forward to their one-off reunion.

They said: ‘We’re so excited to be back together and that BST Hyde Park will be the first stage we perform on in almost four years. We have incredible memories of playing there in 2016, and we can’t wait to see everyone in July.’

For more information and tickets, head to https://www.bst-hydepark.com/