Sanjeev Gupta warned his UK business was in serious trouble after the largest lender to his group of companies collapsed.

The 50-year-old tycoon told unions that Liberty Steel was ‘performing well’ worldwide and ‘benefiting from a 13-year high in steel prices’.

But in comments that will send a chill through his workforce, he added: ‘While the group as a whole is performing well operationally, there are some exceptions and I’m sorry to say that includes some of our UK steel businesses.’

Liberty is Britain’s third largest steel maker – with around 3,000 employees at 11 sites.

But the company has been plunged into crisis following the collapse of its biggest financial backer, Greensill Capital, this week.

Last night unions urged ministers to ‘take an active role’ in the crisis to protect jobs and ensure the company can keep operating.

Downing Street described reports that thousands of jobs might be on the line as ‘very worrying’, and the Prime Minister’s official spokesman said: ‘We continue to follow developments closely.’

In Gupta’s first remarks since the demise of Greensill, he said talks to secure new funding were ‘progressing well but will take some time to organise’.

He insisted there was ‘adequate funding’ for the time being and said the company is ‘addressing the parts of the UK steel business’ that are struggling.

The Indian-born British businessman said demand for some of Liberty’s products plummeted by as much as 60 per cent during the pandemic following ‘a severe downturn in the aerospace sector due to Covid-19’. 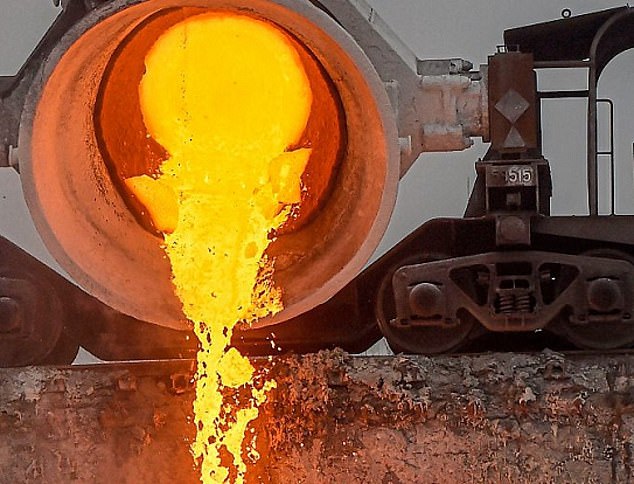 Liberty is Britain’s third largest steel maker – with around 3,000 employees at 11 sites

This could spell trouble for the Stocksbridge plant in South Yorkshire where plane components are made.

Around 762 people work at the high-tech factory and the company said it is using the Government’s furlough scheme – but there are fears jobs are still at risk.

Gupta was dubbed the ‘saviour of UK steel’ after a spending spree that saw him buy up plants in Rotherham, Stocksbridge, Newport and Hartlepool.

As well as steel plants, Gupta also owns Scotland’s only aluminium smelter and huge tracts of land that came with it – including the slopes of Ben Nevis – and is working on hydroelectric projects.

These businesses form part of Gupta’s GFG Alliance, which has relied heavily on Greensill for money.

Greensill, which counts David Cameron as an adviser, went into administration on Monday after creditors froze billions of pounds of assets. Court documents said it had around £3.6billion of exposure to GFG, which had already started to default on payments.

Gupta’s metals plants have also missed payments to the tax authorities. The tycoon has scrambled to arrange cash from other sources and told unions the group is ‘enthused by the amount of offers that we have received’.

In a joint statement, the group said ‘the meeting was positive and constructive’ but added: ‘Given the strategic importance of Liberty’s steel operations, we believe Government must now take an active role to facilitate a comprehensive solution that safeguards the future and protects jobs.’

So how did regulators miss crisis at Greensill?

Government and City watchdogs are under fire for allowing Greensill Capital to slip between the cracks of the regulatory regime.

Greensill, which tumbled into administration on Monday, was a major lender to Sanjeev Gupta’s business empire GFG Alliance.

Run by Australian banker Lex Greensill, the firm did not have a banking licence, so was not regulated by the Prudential Regulation Authority (PRA). And its main business of supply chain financing – where it pays the money which a firm owes to its suppliers, and gets repaid by the firm when it has freed up more cash – was not regulated by the Financial Conduct Authority (FCA). This is because supply chain financing falls outside of the FCA’s regulatory ‘perimeter’, which is set by Parliament and dictates what the City watchdog can supervise.

Now the Government is coming under pressure to expand that perimeter, and prevent another Greensill-style collapse, amid claims the lender’s heavy exposure to Gupta went unchecked.

A City source with links to Whitehall said: ‘It is not as though the Government was not alerted to Greensill. They must have looked at Lex closely when he was awarded a CBE and allegedly given an entry pass to the Cabinet Office building.’

The Treasury did not respond to a request for comment.