NEW YORK (AP) – Growing up in Cuba, Lourdes Gurriel Jr. didn’t foresee coming through in the clutch the way he did in his first major league game.

Gurriel made an impressive debut with two hits and three RBIs as the Blue Jays beat the New York Yankees 8-5 Friday night.

Toronto Blue Jays’ Lourdes Gurriel Jr. connects for a two-run base hit against the New York Yankees during the fourth inning of a baseball game, Friday, April 20, 2018, in New York. (AP Photo/Julie Jacobson)

“Well, no one imagines that,” said Gurriel in Spanish. “Every ballplayer’s dream is to play in the best league in the world, and this truly is a dream come true.”

Teoscar Hernandez, another promising player in the Toronto organization, homered and drove in three runs, and Yangervis Solarte also connected for the Blue Jays, who have won nine of their last 11 games.

Yankees slugger Giancarlo Stanton broke a 50 at-bat homerless slump with his fourth shot of the season, a drive that put New York ahead 4-2 in the third.

“You block out all the noise as much as possible and then you just remember this is a kid’s game,” said Stanton, who is hitting just 5 for 42 at Yankee Stadium this season. “Remember how you were back when you were a kid and you got out there and prepare and let what happen happens.”

The 24-year-old Gurriel was called up from Double-A New Hampshire, where the second baseman was batting .347. The brother of Houston first baseman Yuli Gurriel hit a two-run single in the fourth that gave Toronto a 5-4 lead, then had an RBI single in the fifth that put the Blue Jays ahead to stay at 6-5.

Gurriel signed a seven-year, $22 million deal in November 2016 after defecting along with Yuli Gurriel the previous February from the Cuban team that was participating in the Caribbean World Series in the Dominican Republic.

He tried his best to shy away from his middle sibling’s remarks earlier in the day, claiming the Toronto prospect as the better major leaguer.

“It’s the desire I’ve always had of improving,” Gurriel said.

Manager John Gibbons came away impressed with his youngster’s poise, especially during his third turn at the plate, facing an 0-2 count in a tied game.

“He got to the big leagues and he did it the right way,” Gibbons said. “Couple of big hits, especially that second one, two strikes, shot the ball the other way.”

Toronto starter Marco Estrada (2-1) weaved in and out of trouble over five innings. He was charged with five runs and seven hits, three of them home runs, but improved to 4-0 in his last seven starts at Yankee Stadium, thanks to Gurriel.

“Yankee Stadium, it was a good crowd out there,” Estrada said. “The nerves, he’s probably feeling a little bit of them, but he didn’t show any of it.”

Seung Hwan Oh, Danny Barnes and Ryan Tepera each followed with a scoreless inning. Roberto Osuna pitched the ninth for his sixth save in as many chances.

The Blue Jays chased Sonny Gray (1-2) by sending nine batters to the plate in the fourth inning. Gray allowed five hits and five runs in 3 1/3 innings.

The New York starter retired the side in the first inning. Then he simply unraveled.

“I’m frustrated, obviously, I expect a lot more from myself,” Gray said.

A solo homer by rookie Miguel Andujar made it 5-all in the home half of the fourth.

Tyler Austin hit a two-run in the second off Estrada.

Blue Jays: 1B/DH Morales was activated from the 10-day disabled list after missing his last seven games due to a right hamstring strain. LHP Tim Mayza and IF Gift Ngoepe were optioned to Triple-A Buffalo.

BEST OF THE BUNCH?

Yuli Gurriel did pretty well in his first full season in the majors last year, hitting .299 with 18 homers and 75 RBIs. Along the way he also picked up a World Series ring. His older brother, Yuniesky, wasn’t that bad, either, during his 16-year run in the Cuban National Series. Their dad, Lourdes Sr., starred for 15 years on the Cuban National Team, winning a gold medal, and now manages the national squad.

But in the long run, the Astros first baseman said he believes Lourdes will turn out to be a better product at the big league level.

“I don’t want to put any pressure on him, but he hits better than me,” Yuli Gurriel said through a translator before Houston took the field against the White Sox in Chicago on Friday night. “Runs better than me and is a better defensive player than me.”

Lourdes impressed the Blue Jays during his first 12 games of the minor league season, hitting 17 for 49 and was third in the league in RBIs (11) and hits.

Gibbons penciled Lourdes as his second baseman in the nine-hole, but could also use him at shortstop.

“I think the kid’s got a chance to be a really, really good hitter,” Gibbons said before the game. “And breaking in @ Yankee Stadium, the Mecca, he and his brother both being in the big leagues, yeah that’s pretty cool.”

The Yankees, who have made an AL-worst 18 errors, were put through a full workout prior to batting practice. They’ve made six fielding miscues the last five games.

Blue Jays: RHP Marcus Stroman (0-1, 7.98) will try for his first win of the season when the series resumes Saturday afternoon. Stroman started against New York on April 1 and allowed four runs and struck out eight in five innings but earned a no-decision in Toronto’s win. 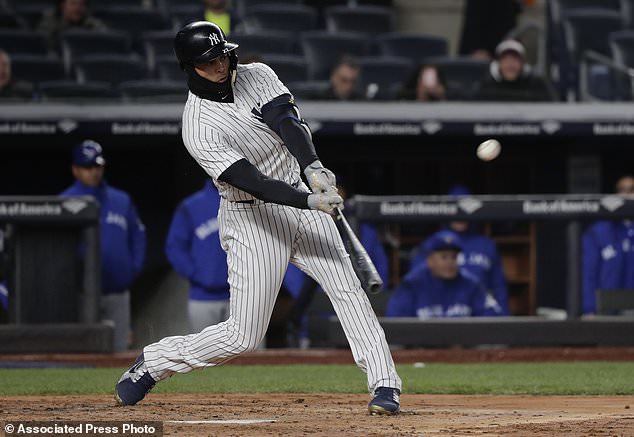 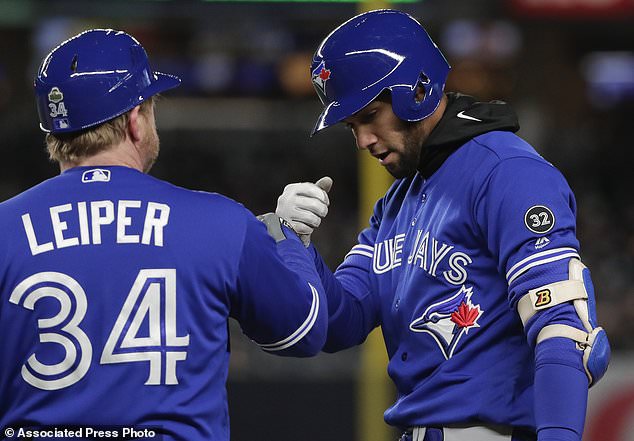 Toronto Blue Jays’ Lourdes Gurriel Jr., right, is congratulated by first base coach Tim Leiper (34) after driving in a run on a base hit against the New York Yankees during the fifth inning of a baseball game, Friday, April 20, 2018, in New York. (AP Photo/Julie Jacobson) 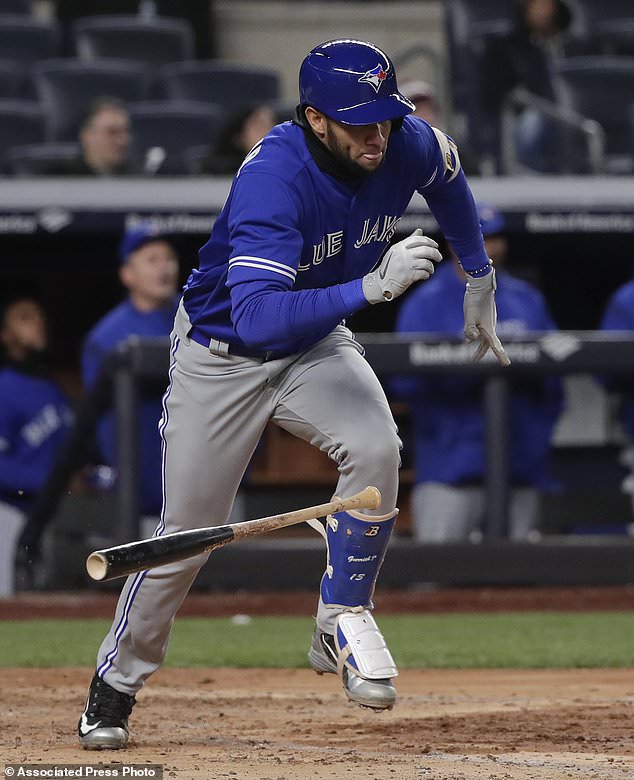 Toronto Blue Jays’ Lourdes Gurriel Jr. breaks for first base on an RBI-base hit against the New York Yankees during the fifth inning of a baseball game, Friday, April 20, 2018, in New York. (AP Photo/Julie Jacobson) 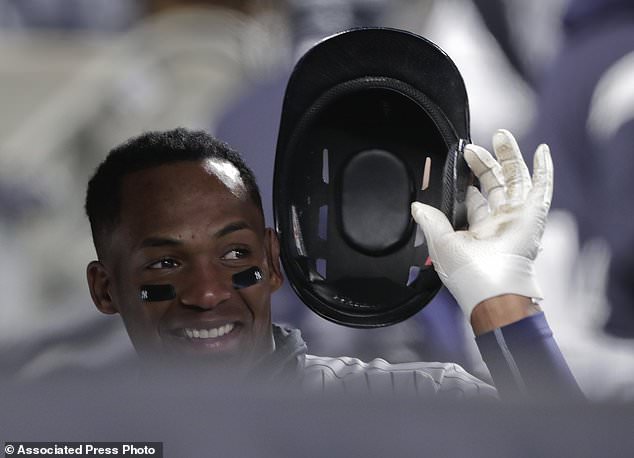