Gurriels are 1st brothers with multiple homers on same day

Gurriels are 1st brothers with multiple homers on same day

TORONTO (AP) – Lourdes Gurriel Jr. and his older brother, Yuli, have become the first brothers in major league history to have multihomer games on the same day.

Toronto’s Lourdes Gurriel homered in the first and fourth innings Friday night in the Blue Jays’ 11-3 loss to the Tampa Bay Rays. He also became the first rookie in Blue Jays history to homer in three straight at-bats after hitting a game-tying homer in the ninth inning of Toronto’s win on Thursday. Lourdes Gurriel, who has 11 homers this season, is the 14th Toronto player to achieve the feat, the first since Josh Donaldson on Sept. 16-17, 2017.

Houston’s Yuli Gurriel hit a grand slam in the first inning and added a two-run shot in the third inning of the Astros’ 11-3 victory over the Los Angeles Angels. He has 12 homers this season.

Houston Astros’ Yuli Gurriel (10) celebrates in the dugout after hitting a grand slam against the Los Angeles Angels during the first inning of a baseball game Friday, Sept. 21, 2018, in Houston. (AP Photo/David J. Phillip) 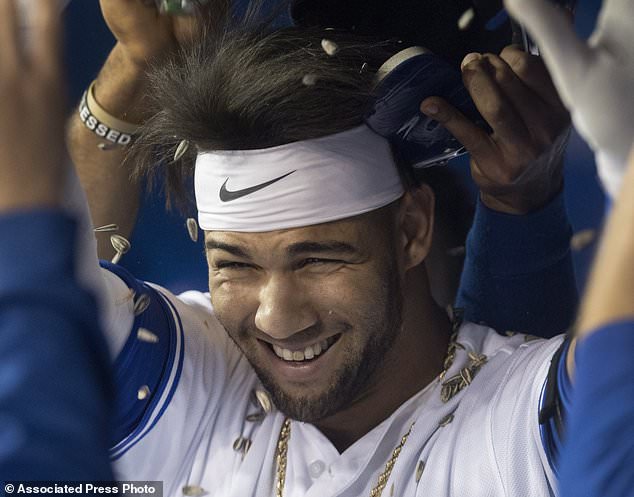 Toronto Blue Jays’ Lourdes Gurriel Jr. gets a sunflower-seed shower in the dugout after hitting a solo home run against the Tampa Bay Rays during the first inning of a baseball game Friday, Sept. 21, 2018, in Toronto. (Fred Thornhill/The Canadian Press via AP)