When Raheem Sterling was at primary school, his teacher made a bold prediction: ‘The way you are going, you’ll either end up playing for England or you’ll be in prison.’

It was 2005 and the baby-faced product of one of North London’s grimier neighbourhoods was already displaying an unfortunate talent for self-destruction that has characterised much of his football career.

With a football at his feet, the ten-year-old Sterling, who lived in the shadow of Wembley Stadium, was displaying extraordinary talent, which had already caught the eye of scouts from nearby Queens Park Rangers.

Away from the football pitch, his behaviour was so unruly that he was taken out of mainstream education and sent to a school that caters for pupils with special needs.

‘He was a tiny little ball of energy and, sometimes, that would tip over into anger and he would get aggressive with other kids,’ his teacher Chris Beschi later recalled.

‘But, from the first day he joined the school, it became evident that he had a talent for football that was way beyond his years.’

Thirteen years and 37 England caps later, Raheem Shaquille Sterling’s success on the football pitch continues to be as stratospheric as his all-too-regular failures off it. 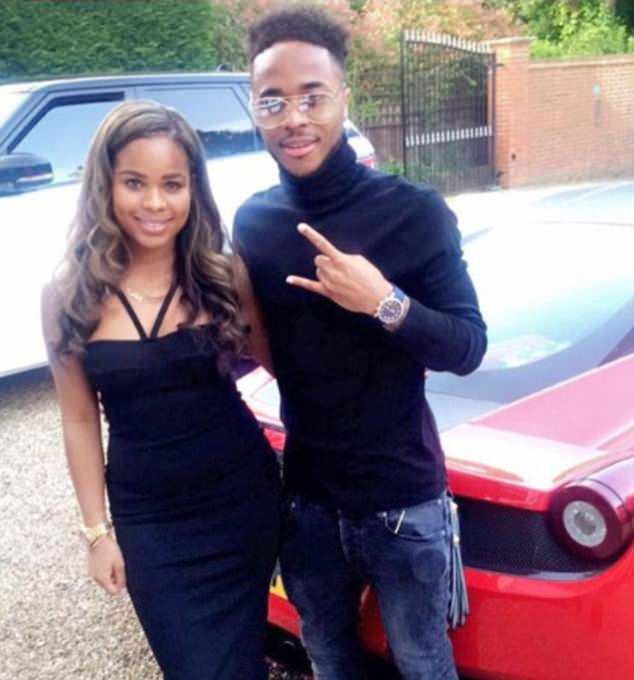 Sterling, pictured here with his girlfriend Paige Lee Hansel, is part of Gareth Southgate’s squad to travel to Russia next month for the World Cup

On one hand, the rise of the 23-year-old star represents an old-fashioned sporting fairy tale: a working-class boy who came to the UK as an infant and, through talent and hard graft, has achieved fame and fortune beyond the wildest dreams of his immigrant single mother.

A key figure in Manchester City’s title-winning season, scoring 18 goals in the process, the £200,000-a-week forward will be cheered by a nation when he takes the field at the coming World Cup.

Yet, on the other hand, this supposed role model has for far too long allowed himself to be defined by acute lapses in judgment that — in the eyes of many critics, at least — have turned him into a symbol of the amorality that is today at the heart of the so-called Beautiful Game.

Recent years have seen court appearances, at least one reported tryst with a prostitute and secret dates with a Playboy model who was most certainly not Paige Lee Hansel, the long-suffering fiancee and mother of his youngest child Thiago. 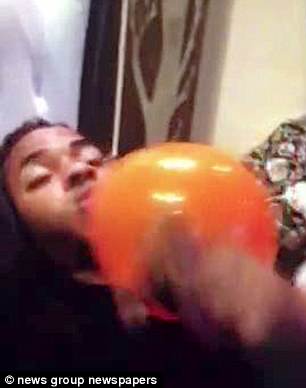 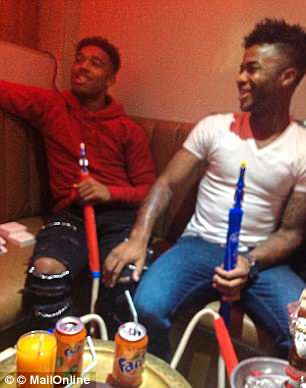 Sterling has been photographed taking ‘Hippy Crack’, left, and with a shisha pipe, right

On social media, where he shares images and videos of his gaudy mansion in Cheshire, purchased for £3.1 million in 2016, high-end cars (he’s said to own seven — one for each day of the week) and collection of bling wristwatches, he’s also been filmed smoking and inhaling a mind-altering intoxicant known as ‘hippy crack.’

In this ignoble tradition came yesterday’s somewhat bizarre controversy over Sterling’s decision to get a large new tattoo — of an M16 assault rifle.

He showed off the design, running down the lower half of his right leg, in a photo shared with his 3.6 million followers on Instagram on Monday.

It was taken at England’s training ground in Staffordshire as players assembled to start preparations for the World Cup, which begins in just over a fortnight.

Critics promptly condemned it as provocative and irresponsible, pointing out that more than 60 people have been killed by gun and knife violence in London this year alone and that similar weapons have been used in countless recent mass shootings in the U.S.

Branding it ‘sickening’, ‘disgusting’ and ‘totally unacceptable’, the lobby group Mothers Against Guns called for him to be dropped from the England side.

Lucy Cope, whose son was shot dead outside a London club, said: ‘He’s supposed to be a role model, but chooses to glamorise guns.’

Last night, her words were echoed by the father of Damilola Taylor, who was stabbed to death in a street attack aged ten.

Richard Taylor told The Sun: ‘Young people look up to footballers. Sterling hasn’t displayed the discipline we expect. He should be reprimanded and made to apologise to victims’ families.’

Iffat Rizvi, who runs the Starr anti-guns campaign, said: ‘This is disrespectful to young people who lost their lives.’ 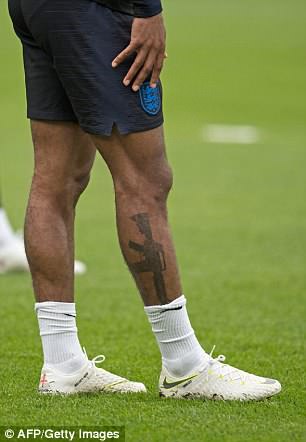 Meanwhile, former football manager Harry Redknapp said: ‘His manager needs to talk to him, but if he’s got any sense, he’ll go and get the tattoo taken off today.’

For his part, Sterling released a statement suggesting that the design was partly a tribute to his late father, who was shot and killed in Jamaica, in circumstances that have never been fully explained, several years ago. It read:

‘When I was two, my father died from being gunned down to death. I made a promise to myself [that] I would never touch a gun in my lifetime. I shoot with my right foot, so it has a deeper meaning [and is] still unfinished.’

That was good enough for the Football Association, which praised Sterling’s ‘honest and heartfelt’ explanation.

BBC Match Of The Day host Gary Lineker also jumped to the player’s defence, saying he is a ‘terrific footballer with a brilliant work ethic’ and describing the ‘persecution’ of Sterling as ‘disgusting.’ He added on Twitter: ‘Unique to this country to attempt to destroy our players morale before a major tournament. It’s weird, unpatriotic and sad.

‘It’s his business what kind of art he has tattooed on his body.’

But the damage was already done: England’s working day had been overshadowed by a petty and entirely avoidable dispute.

All of which gives more ammunition to those who regard Sterling as an embodiment of his generation of footballers, who have singularly failed to live up to the responsibilities that ought to come with the power, wealth and status their glamorous career affords.

Certainly, no one can deny that ever since he burst onto the professional scene as a 17-year-old prodigy at Liverpool, he’s displayed an uncanny knack for ending up in trouble.

Sterling’s story begins in Maverley, a crime-ridden suburb of Kingston, Jamaica, where he was born in 1994 and spent his early years in a three-bedroom bungalow with eight relatives.

Around the time of his father’s murder, his mother Nadine went to the UK, leaving him to be raised by his grandmother, Joy. He joined Nadine in London two years later.

‘I lived on an estate for a month until my mum got the place in Wembley. From eight to 14, I lived in Wembley,’ he once recalled. ‘It’s not the poshest area but, for me, it was an unbelievable area. It was lovely growing up there.’

While studying at Vernon House Special School, an institution for children with special needs, he joined QPR’s youth system.

Nadine, mother of his four step-siblings, promptly moved to Merseyside with him.

‘There was no regret for me in leaving London,’ Sterling has said. ‘I wanted to get out of London because you are probably doing stuff you shouldn’t be doing and getting in the wrong crowd. I remember when I left, everyone was getting stabbed. It was a really bad time.’

Sadly for Sterling, London wasn’t the only place where he was tempted to stray.

In 2012, the year of his professional debut (Liverpool fans declared him the most gifted teenager they had seen since their hero Steven Gerrard), he was accused of attacking a 27-year-old woman who was known to him, with her suffering ‘slight’ facial injuries.

But a charge of common assault was dropped after a witness failed to turn up to court.

The next year, he was held over claims he assaulted former model girlfriend Shana Rose Halliday, 21. This case was also dropped when she gave ‘disappointing’ evidence to support the prosecution’s case.

By then, he was earning around £35,000 a week. He’d also fathered a daughter — the product of what is usually described as a ‘short relationship’ — and been fined for failing to insure one of his fleet of flashy cars.

Like so many football stars, in a sport awash with cash, success seemed to come with no strings attached, with his employer seeming unwilling to publicly criticise his personal failings for fear of reducing the value of their asset.

So it went that Liverpool did nothing to rein in Sterling when, in 2015, he was videoed in a state of intoxication inhaling the laughing gas nitrous oxide — a then-legal high known as ‘hippy crack’ from balloons.

Instead, later that year, he was sold to Manchester City, for £50 million, bumping his salary up to more than £200,000-a-week in the process.

His new employers maintained the same pattern of loyalty in the face of bad behaviour. They kept schtum when, 48 hours after contributing to a laboured England performance against Estonia, he was photographed out on the town smoking from a shisha pipe — once more setting an appalling example to legions of young fans.

Around the time of his move to Manchester, Sterling, meanwhile, set up home with Lee Hansel, a childhood friend who on social media calls herself Paige Milian.

Months later, though, he was photographed with a former Playboy model called Tabby Brown. They spent an afternoon together at the Lowry Hotel in Manchester.

That July, he was photographed on holiday in the Caribbean with a pair of sisters, who were also models.

By last summer, the long-suffering Paige was pregnant. But that didn’t stop Sterling using Man City’s pre-season tour to Los Angeles to spend a night at the Ritz Carlton hotel with a prostitute who later told The Sun newspaper that he’d met her at a local strip club, before haggling over her fee via the messaging service WhatsApp.

Perhaps ironically, this set the stage for Manchester City’s title-winning season, during which Sterling has publicly embraced clean living, spending nights at home and extolling the virtues of yoga.

After a tricky couple of years, when he’d flopped at the 2016 European Championships and under-performed in the league, this sparked serious improvement in his game, giving fans hope that this very privileged young footballer might finally be ready to grow up.

But this week’s events suggest that England’s World Cup hopes still rest, in part, on a player who, instead, has come to represent the moral decay of our national game.

Last night, her words were echoed by the father of Damilola Taylor, who was stabbed to death in a street attack aged ten.

Richard Taylor told The Sun: ‘Young people look up to footballers. Sterling hasn’t displayed the discipline we expect. He should be reprimanded and made to apologise to victims’ families.’