This is the moment a gymnast scores a perfect 10 after pulling off a painful final move in an incredible routine.

Katelyn Ohashi, 21, a senior at UCLA, performed the funky routine to a medley of hits at the Collegiate Challenge in Anaheim.

The incredible gymnast wows the audience by doing a triple tumble into a painful split before springing to her feet to the sound of applause as though it was easy.

Katelyn Ohashi, a student at UCLA performed the funky routine to a medley of hits at the Collegiate Challenge in Anaheim 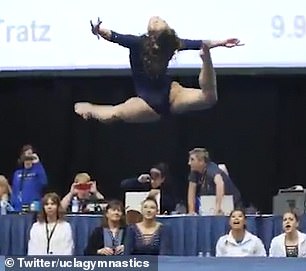 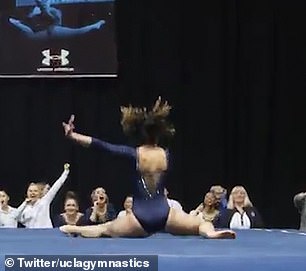 She smiles throughout the whole routine and breaks into dance between flips to tunes by Michael Jackson and Earth Wind and Fire.

And her teammates watching in the wings can be seen dancing along to the high-energy performance.

At the end, the crowd go wild and she runs to high-five her team mates before the judges hold up score with a perfect 10.

UCLA gymnastics posted the video of the performance on Twitter with the caption: ‘A 10 isn’t enough for this floor routine’.

The clip has since gone viral and users on social media were left wincing at her moves and amazed at her incredible skills.

One user said: ‘The power drop into the splits bounce up at the end is mind bending. The power moves in modern floor routines are ridiculous.’

Another wrote: ‘I would tear every ligament I didn’t know I even had’.

One wrote: ‘I know zero about gymnastics but this is fun to watch. I hurt myself just watching.’

Another said: ‘I was a gymnast and still watch a lot, this is the most exciting floor routine I’ve ever seen. So much energy and perfectly executed’.

Katelyn, who has been doing gymnastics for 18 years, has won many national competitions, having spent years training with the US National Women’s team.

This is also not the first time that she has earned viral fame with her sensational skills on floor; last year, Katelyn earned the same global recognition with a Michael Jackson-inspired performance that helped her to rack up multiple perfect 10s throughout the previous season. 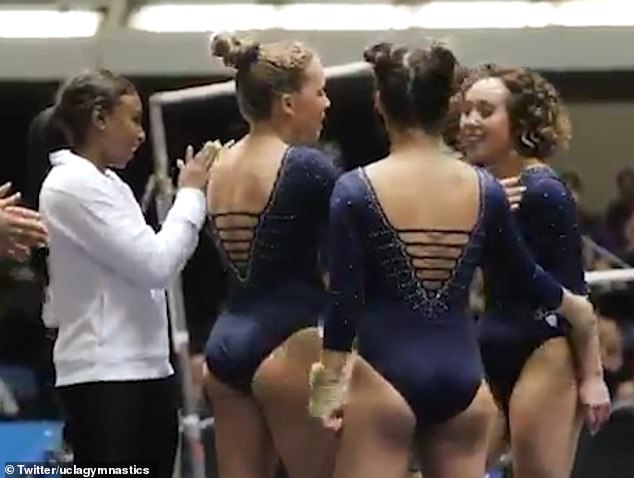 Katelyn’s team mates congratulate her after her routine. The clip has since gone viral and users on social media were left wincing at her moves and amazed at her incredible skills 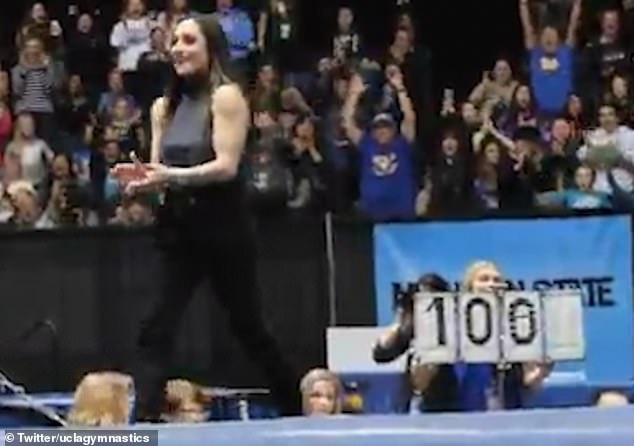 At the end, the crowd go wild. before the judges hold up score with a perfect 10, seen here, alongside former Olympian-turned-UCLA coach Jordyn Wieber

Video of Katelyn performing the routine in February 2018 achieved the same awe and praise from fans around the world, racking up more than 561,000 views after being posted to the NCAA Gymnastics YouTube channel.

And not long before her viral success, Katelyn’s name featured in headlines for a very different reason; early in 2018, she chose to speak out about the different kinds of abuse she suffered at the hands of her coaches throughout her career as an elite level gymnast.

Writing a personal essay for Behind the Madness, Katelyn revealed that that although she loved going to the gym as a young child, as soon as an ‘elite atmosphere’ kicked in, her joy and enthusiasm for her sport were replaced by fear and dread.

‘Elite gymnastics should only be a place where our joy continues to grow,’ she wrote.

Detailing that ‘gymnastics requires sacrifice, dedication, discipline, getting back up every time you fall down, repetition, mental toughness, along with support, joy, and communication’, Katelyn shared that unfortunately she never experienced ‘support, joy and communication’ from her coaches or parents.

She also said she finds it sad that it ‘required things to get this bad’ for change to finally happen.

Katelyn also broached the abuse that she experienced as a child and shared that although she was never sexually abused, she was subjected to mental and verbal torture that was ‘never acknowledged’ and ‘ignored’.

‘Time for change has been long overdue. We are now crying out and demanding that our voices be heard once and for all and that all of our reports are taken seriously and not simply swept under the rug, because exactly as sexual abuse leave its undying marks, this type of verbal abuse does as well.’

She later described college gymnastics as the ‘reward we receive after years of abuse’, adding: ‘It is the time of discovery, healing, learning, growing, and having the time of our lives.’