Gypsies use 1,000 TONNES of rubble and 12 dumper trucks to build illegal camp in just three days

Travellers have built an illegal permanent camp using 1,000 tonnes of rubble and 12 dumper trucks in just three days after moving onto a field in the middle of the night, despite being denied planning permission.

Truckers arrived on the land close to the Swan With Two Necks pub at Blackbrook, in Staffordshire, at 3am last Saturday.

Drone footage shows the field has been covered in hardcore with two park homes and six caravans in place.

It comes after a planning application to transform the Blackbrook Nursery site off A53 Newcastle Road was withdrawn after being recommended for refusal by Newcastle Borough Council planners.

Travellers moved 1,000 tonnes of rubble to create an illegal campsite near the Swan With Two Necks pub at Blackbrook, Staffordshire overnight on Saturday. Footage shows the field covered in hardcore with two park homes and six caravans 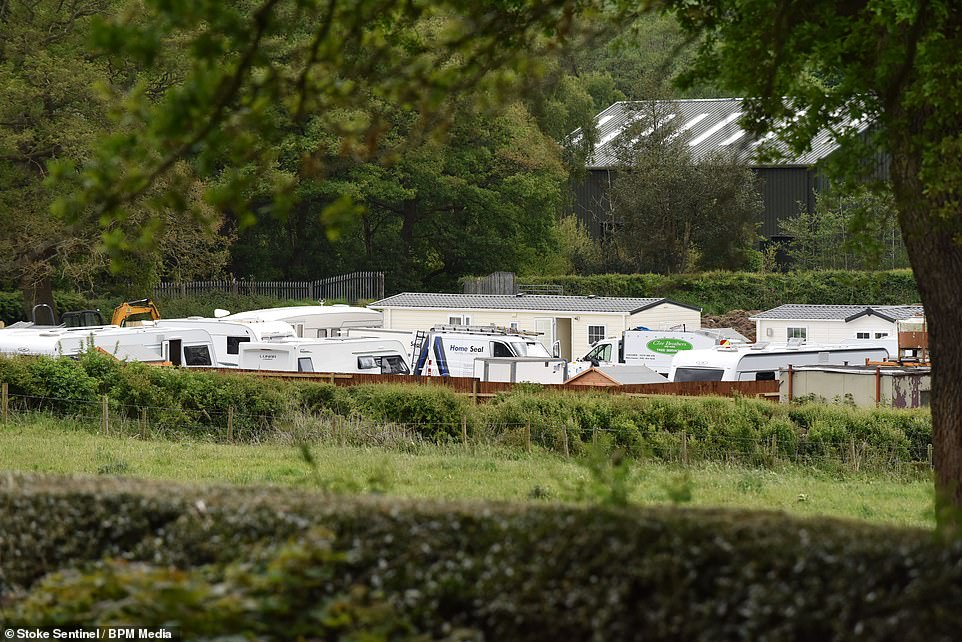 Caravans, two park homes and other various vehicles pictured at the site. The land was bought for ‘three times the agricultural value’ but the travellers ‘never actually secured planning permission’, according to a local councillor

The scheme – for four caravan pitches and utility blocks – had faced fierce opposition with a huge sign erected near the proposed site last June.

Councillor Graham Hutton, who represents Maer and Whitmore, said he had been inundated with angry calls from his constituents since the travellers arrived under the cover of darkness.

He told MailOnline: ‘They applied for planning permission for a caravan site which the council turned down in May 2019. They did not appeal it and moved in at 3am on Saturday morning with construction equipment.

‘During Saturday they delivered at least 50 trucks and used 1,000 tonnes of building waste, demolition rubble and topped it with hardcore. They built a fence around it, put on two park homes, six caravans and a variety of vans in total defiance of the council, neighbours and everybody else.

‘The council will be taking action against them. Across the road is Severn Trent pumping station and borehole for north Staffordshire. Nobody knows what’s in that demolition waste, so the whole of Staffordshire could be at risk.’

He added: ‘I went down on Monday and they were putting AstroTurf down then and had it all fenced by then. I wish ordinary builders could build that fast, it was impressive.

‘The clearance of it when we get that far will be very expensive. The whole site appeared over three days of the bank holiday.

‘One thing that’s almost palpable is the absolute outrage of law-abiding residents. My phone hasn’t stopped ringing – if they own the land all they can be done for is breach of planning regulations.’ 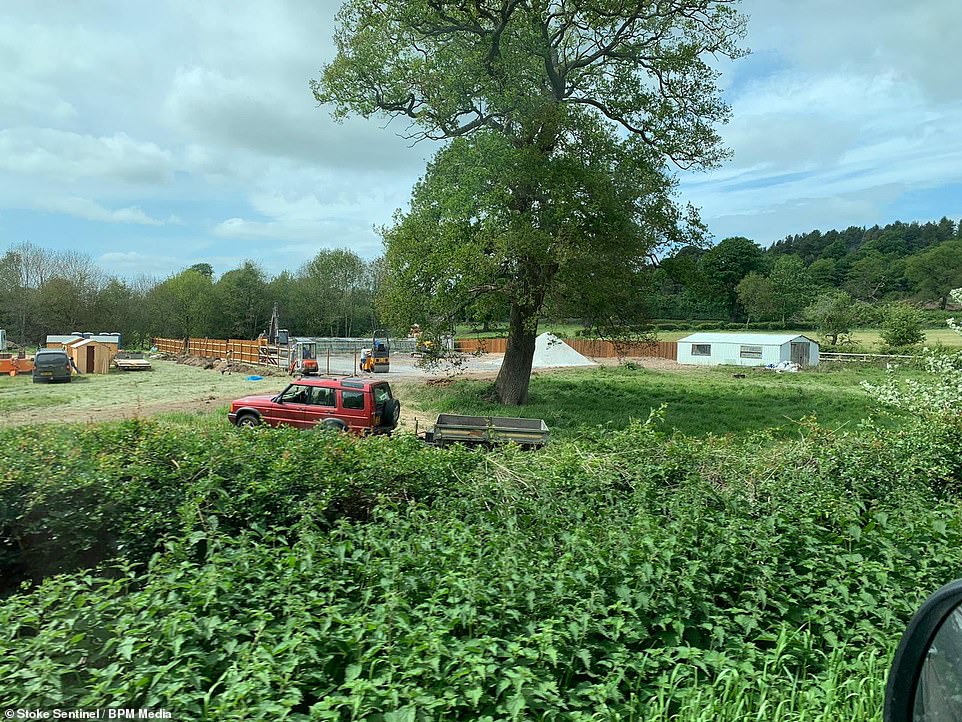 The land close to a pub at Blackbrook in Staffordshire. Mr Hutton said he had been inundated with angry calls from residents, adding: ‘One thing that’s almost palpable is the absolute outrage of law-abiding residents’ 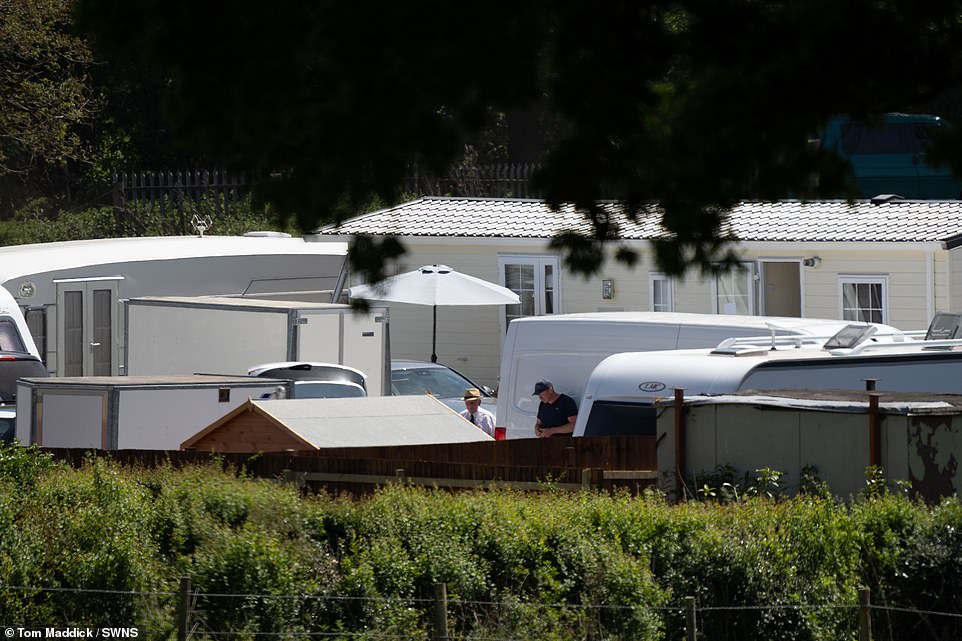 A close-up view of the illegal camp, with park homes and caravans seen on the site. Concerns have also been raised by Severn Trent Water about possible contamination to the local drinking water bore hole

A total of 90 objections were put to the council last year with residents complaining about sewage provisions, noise, light pollution and the impact on the roads.

A resident of Ashley, the next village over from Blackbrook, said: ‘There is already black plastic rubbish bags and used Calor gas bottles mounting at the green field site and the gypsies have only been there for three days.

‘All of us local residents’ initial fears are coming to fruition.’

She added: ‘Planning permission and things of that nature are there for a reason to stop this sort of thing from happening. 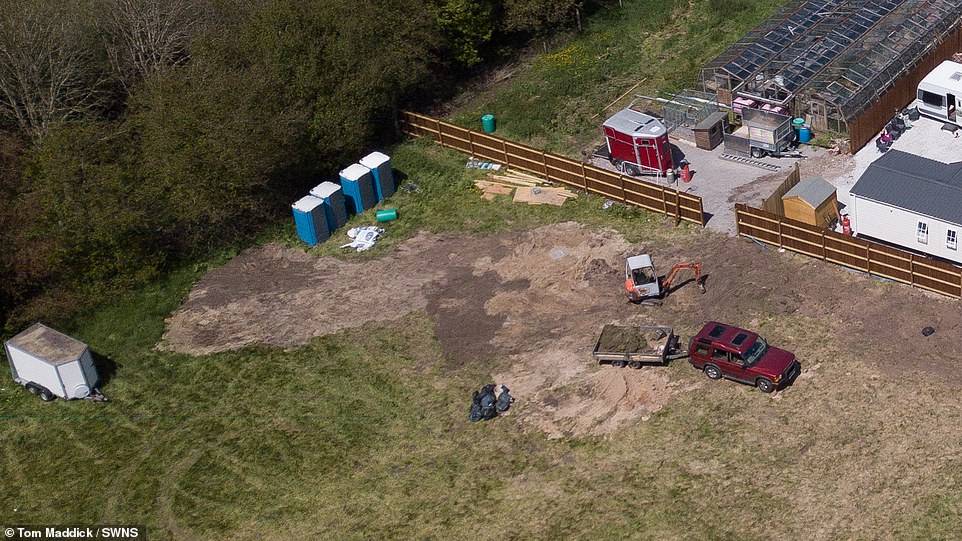 An aerial view shows the illegal camp, which the council is said to be taking action against. A resident said the travellers have ‘gone against the planning permission’ as they ‘didn’t get their own way’, adding: ‘It sticks out like a sore thumb’ 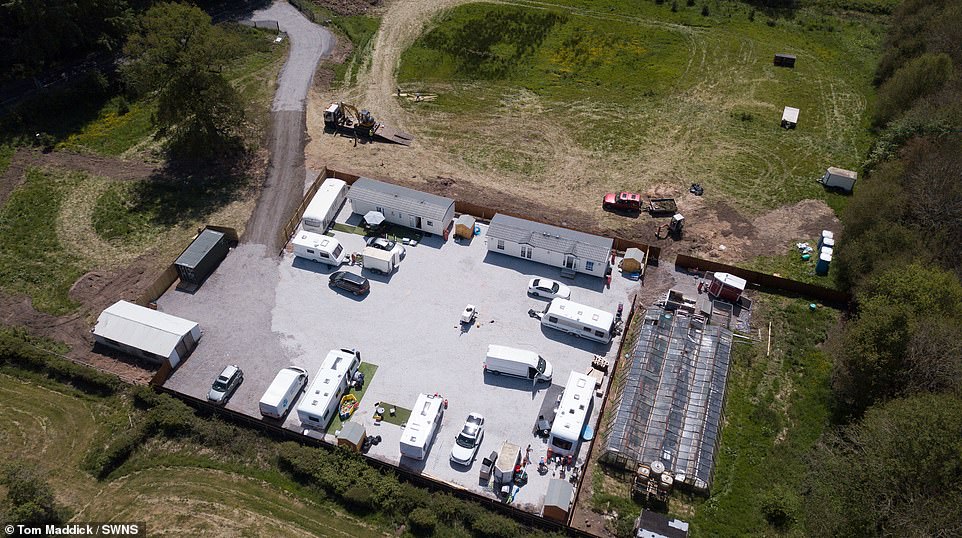 Trucks and other vehicles pictured at the illegal permanent camp. Councillor Paul Northcott, cabinet member for planning and growth, said they are working with ‘partners, including Staffordshire Police’ on the next steps 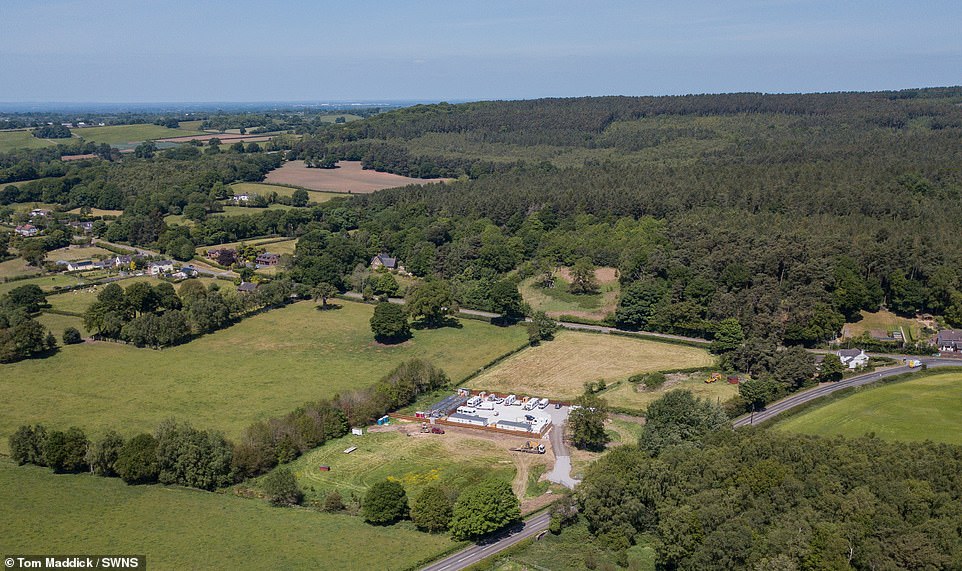 An aerial view of the illegal permanent site. One Blackbrook resident described it as ‘appalling’, adding: ‘It’s in a totally unsuitable location away from amenities and with no safe access on the A53’

‘It was rejected because it was in a beauty spot. There were highways concerns, water contamination worries as it was next to a bore hole. It’s not near any shops or amenities. It’s a conservation area too.

‘They’ve gone against the planning permission because they didn’t get their own way. It sticks out like a sore thumb.’

A Blackbrook resident added: ‘This is a law-abiding rural area and we feel very hard done by. We went to great lengths to stop this application being approved. It took hours and hours of my time and I even stood up and gave a speech but it was all for nothing.

‘These people have rode roughshod over the planning regulations. It’s just appalling. It’s in a totally unsuitable location away from amenities and with no safe access on the A53.

‘They came in the middle of the night and have since carried out a massive amount of work. It was an undercover operation. The residents are up in arms about it.

‘They aren’t allowed to live there legally even though they own the land.’

Councillor Paul Northcott, cabinet member for planning and growth, said: ‘We are aware of the situation and have been to the site. The welfare and safety of all concerned is the first priority and we are working with our partners, including Staffordshire Police, on the next steps.’