H.R. McMaster confirms that Gary Cohn stole a document from the president’s desk

McMaster said Tuesday that he knew about the incident ‘and that was wholly appropriate for Gary Cohn, who was a wonderful public servant and a great colleague, to do’.

He had just been asked about whether or not removing papers from the desk the president fits the role of a civil servant during an appearance at Perry World House in Philadelphia.

The letter stolen from Trump’s Oval Office desk by his top economic adviser, Cohn, was reportedly done in order to stop the president from ending a trade deal with South Korea, according to Woodward’s book, Fear.

Woodward also obtained a copy of the astonishing note that Trump wrote in the margins of a speech he was poised to deliver: ‘TRADE IS BAD.’

The president never uttered the words, but Woodward says the phrase is the ‘truest expression’ of Trump’s ‘protectionism, isolationism and fervent American nationalism’. 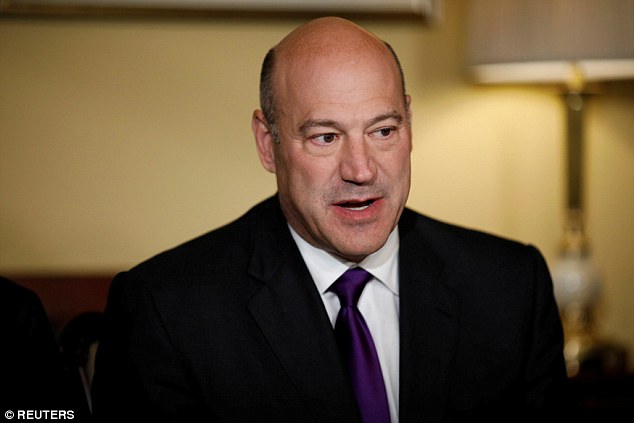 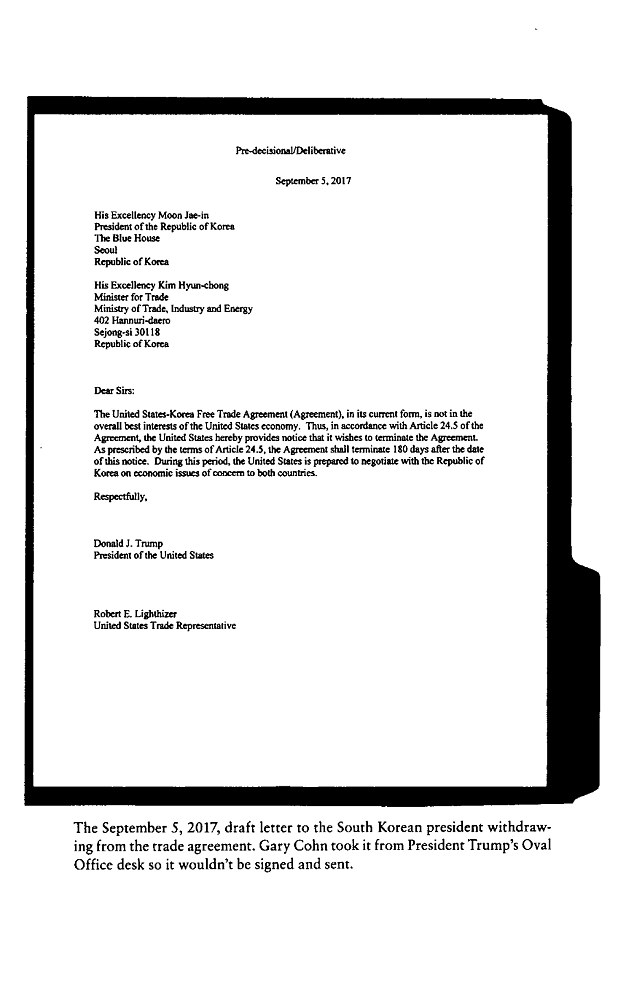 The letter stolen from Trump’s Oval Office desk by his top economic adviser, Cohn, was reportedly done in order to stop the president from ending a trade deal with South Korea, according to Woodward’s book, Fear

Woodward obtained a copy of the astonishing note that Trump wrote in the margins of a speech he was poised to deliver: ‘TRADE IS BAD’

Trump planned to make the assertion during a speech that Woodward says he was working on en route to the US from the G20 summit in 2017.

It’s not clear from the book why he never did, unlike the formal notification to South Korea that Trump was unilaterally ending its trade deal, which Cohn and ex-staff secretary Rob Porter are said to have kept away from the president.

The unsigned letter to South Korea and the note Trump made about trade, in what appears to be his handwriting, are included in Woodward’s book in an astonishing breach of White House security. 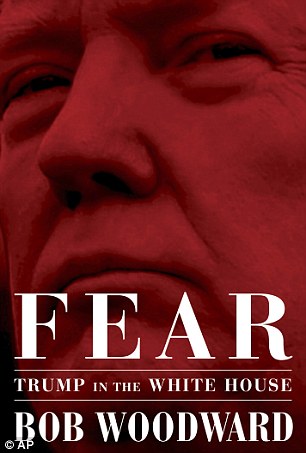 Woodward uses the documents to bolster the narrative that aides were engaged in an elaborate campaign that is outlined in the book to sometimes shield information from Trump – and at other times keep the president from doing things his aides thought would be disastrous.

Cohn has been silent since Woodward named him in an excerpt of his new book as someone who tried to thwart the president from within. The White House ignored a request for comment on the revelations.

Woodward’s book, which officially hit shelves on September 11, includes a draft copy of a memo withdrawing the US from its trade agreement with South Korea that the president never signed.

That’s because Cohn ‘stole it’ off the president’s desk, Woodward writes.

Cohn is said to have boasted to a colleague: ‘I stole it off his desk….I wouldn’t let him see it. He’s never going to see that document. Got to protect the country.’

Trump told a news outlet earlier this month that no one removed anything from his desk.

‘That’s false,’ Trump said of the document removal excerpt. ‘It’s just made up.’ He told The Daily Caller flatly: ‘There was nobody taking anything from me.’

A copy of the book obtained by DailyMail.com includes a scan of the letter; however. And the White House did not immediately slap it down as a faked document.

The documents stated that the current trade deal was ‘not in the overall best interest of the United States economy’.

The letter provides notice of the president’s desire to ‘terminate the agreement’ in 180 days, the required amount of notice. He committed in the letter to negotiating a new trade deal with the close, security ally of the United States. 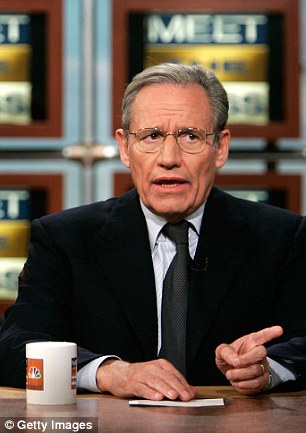 It contained lines for salutations by Trump and trade representative Robert Lighthizer but was left unsigned.

White House Press Secretary Sarah Sanders did not respond to a request for comment via email on the document that was dated September 5, 2017.

The date of the letter indicates that it was drafted just before Trump and South Korean President Moon Jae-in met for bilateral talks at the United Nations.

Porter told an associate, according to Woodward’s book, that there were multiple iterations of the letter, because Trump kept coming back to the topic.

‘I’m tired of these arguments!’ Trump said in one meeting. ‘I don’t want to hear about it anymore. We’re getting out of KORUS.’

Trump made his distaste for the trade deal with Korea, a key US ally, in a White House meeting.

The president ordered son-in-law Jared Kushner to draft the order. The book describes a scene where Kushner took dictation. Porter heard about what Kushner was up to, and later told him: ‘Send me the draft. If we’re going to do this, we cannot do it on the back of a napkin. We have to write it up in a way that isn’t going to embarrass us.’

They prepared a draft, but it was described as part of a ‘subterfuge’ tactic. After a formal meeting on the topic, and following a debate, Trump asked for changes.

‘Well, let’s keep working on the letter,’ Trump said. ‘l want to see the next draft.’

Cohn and Porter didn’t produce a follow-up. The issue disappeared for a while.

‘We’re teetering on the edge,’ Cohn told Mattis. ‘We may need some backup this time. 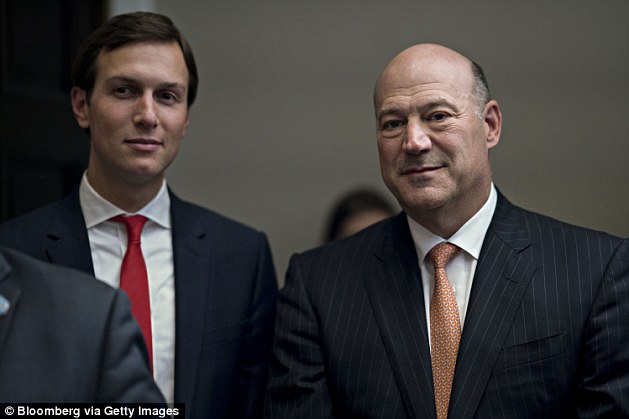 Cohn (right), the former Goldman Sachs boss, is also quoted in the book stating privately: ‘It’s not what we did for the country. lt’s what we saved him from doing’

Mattis, for his part, told Trump: ‘Kim Jong Un poses the most immediate threat to our national security. We need South Korea as an ally. It may not seem like trade is related to all this, but it’s central.’

Trump ultimately saw things his aides’ way and did not shred the trade agreement.

Woodward calls it part of a widespread ‘administrative coup d’etat,’ with Cohen recalling: ‘A third of my job was trying to react to some of the really dangerous ideas that he had and try to give him reasons to believe that maybe they weren’t such good ideas.’

Cohn, the former Goldman Sachs boss, is also quoted in the book stating privately: ‘It’s not what we did for the country. lt’s what we saved him from doing.’

The globalist whose worldview clashed with the president’s left the White House earlier this year. Despite his run-ins with Trump, the president maintained that they had a good relationship until the end. He even suggested that Cohn could return one day in a higher-level position such as Cabinet secretary or chief of staff.

Trump’s spokeswoman had said that the Woodward book, which included damaging characterizations of the White House as ‘crazytown’ and the president as ‘unhinged,’ couldn’t possibly be true when asked it about it at the White House at the time.

‘I don’t think you can have the type of success that we’ve had in this White House under this president if that book was an accurate reflection of what is taking place,’ she told reporters after blasting the book on two morning shows.

The book follows the January release of author Michael Wolff’s Fire and Fury, which led to a rift between Trump and Bannon, his former chief strategist, who spoke with Wolff in terms that were highly critical of the president and his family.

Woodward’s work also comes weeks after former White House aide and ‘Apprentice’ contestant Omarosa Manigault Newman published an expose on her time in the West Wing, including audio recordings of her firing by Kelly and a follow-up conversation with the president in which he claimed to have been unaware of Kelly’s decision.

While White House aides have become increasingly numb to fresh scandals, the latest book still increased tensions in the West Wing, especially given the intimate details shared and the number of people Woodward appeared to have interviewed.