Since Crazy Rich Asians hit theaters this month — topping the box office two weekends in a row — many fans have gushed over what it means for little Asian girls to see that representation on the silver screen.

Blogger Ha Truong from Miami, Florida really drove that point home by dressing up her five-year-old daughter, Olivia, as the movie’s leading lady Rachel Chu, who is played by Constance Wu.

In photos Truong, 32, shared on Instagram, the adorable little girl is seen beaming as she models a tulle dress just like the Marchesa one Rachel donned in the film.

Mini me! Blogger Ha Truong from Miami, Florida dressed up her daughter as Constance Wu’s character in Crazy Rich Asians 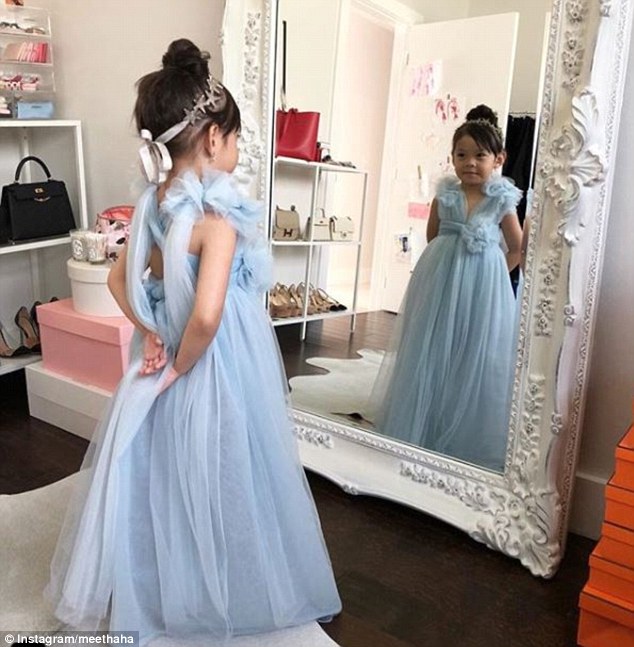 Superfan! The five-year-old adored the blue dress and her mother said she now gets excited whenever she sees the trailer 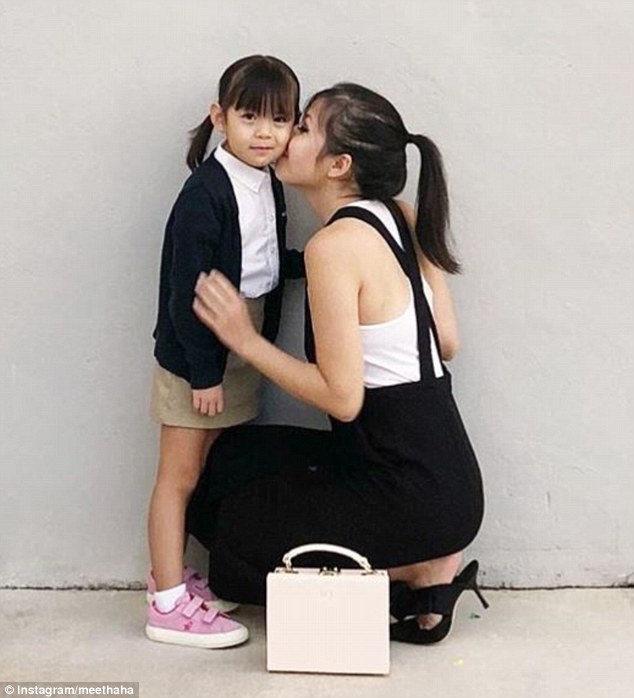 ‘In the trailer, @ConstanceWu wears this ethereal blue gown,’ she captioned the snap. ‘I knew we had to recreate it in honor of… being Asian. Special: Olivia’s mother said they recreated the movie look (pictured) ‘in honor of being Asian’, saying the dress gave her daughter ‘a spark’ when she put it on

‘Once the flowers were on, Olivia gasped and said “Damnnn, Rachel!” Just kidding… she said “Woww!”

‘She gets super excited every time the trailer comes on now and says “Mom! Look! It’s my dress! It’s Constance Wu!”’

Captioning another snap of Olivia in the pretty blue gown, Truong recalled a time when Liv was in preschool, when her classmates asked her if she was Chinese.

‘She’d come home asking if everyone (Asian) is Chinese; she’s Vietnamese and Thai. She didn’t “see” herself at school and her peers didn’t see her,’ she said.

‘When she put on this dress, it gave her a spark.’

Truong told DailyMail.com that her daughter is ‘enamored’ with the dress.

Such a style icon: Olivia wears lots of cute skirts, bags, and shoes 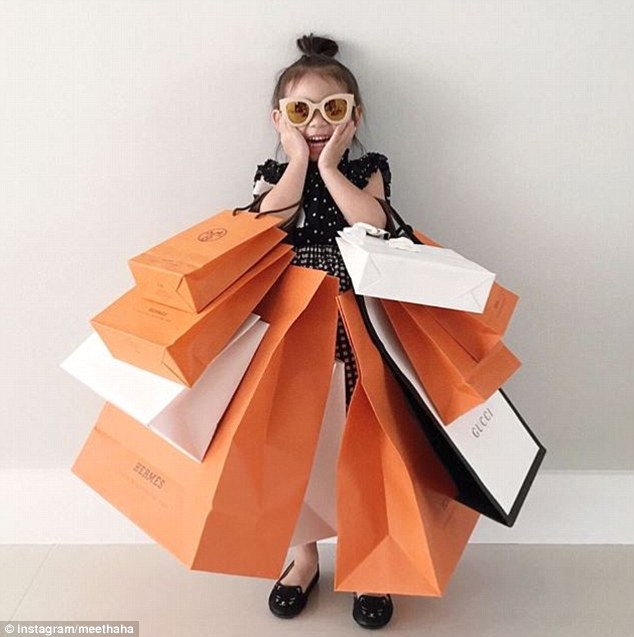 A girl can dream: She’s also posed with her mom’s high-end shopping bags 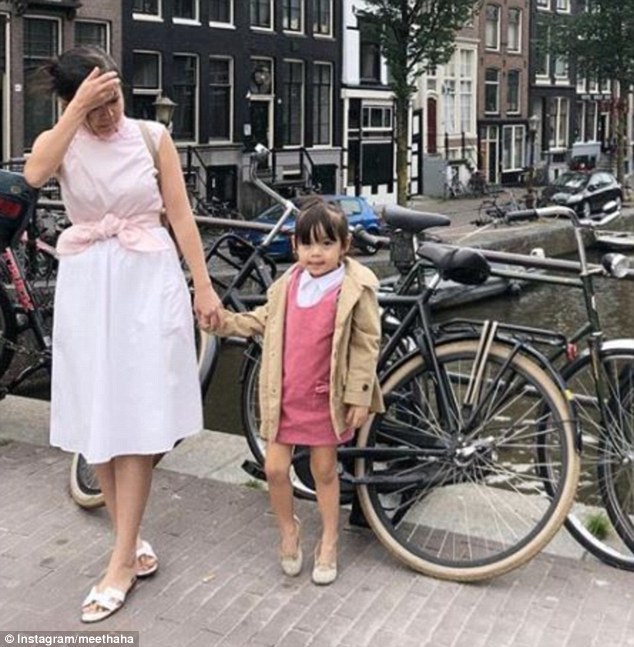 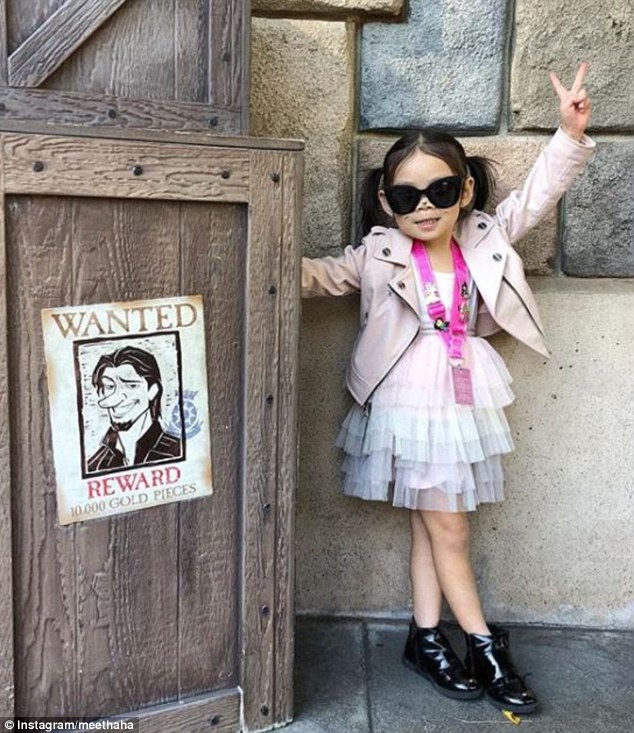 Dress-up perfection: She added that ‘Olivia definitely has her own style’

‘She asked me when Crazy Rich Asians 2 was going to come out because she wants to watch that too,’ she went on.

That Olivia is so in love with this particular dress is really something, considering the little girl always has impeccable style, just like her mom.

On Truong’s Instagram, she is often seen in cute little skirts, sweaters, ballet flats, and boots. She’s also recreated the look of her favorite character from The Incredibles, Edna.

And it’s not just mom picking out everything she wears.

‘Olivia definitely has her own style,’ Truong said. ‘She actually enjoys watching runway footage (which surprised me)… especially if there’s pretty dresses involved.

‘Some days she dresses herself up in the most chic outfit, other days she just wants to be a princess (or 5 by the end of the day), and there are days when she dresses like Julian/Frankenstein from Big Daddy (Adam Sandler). 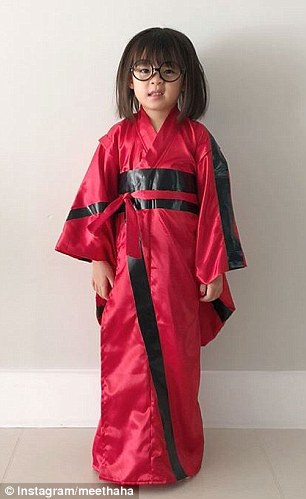 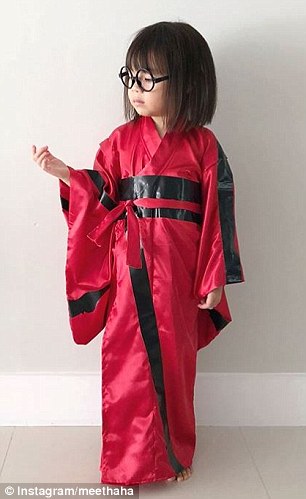 Chic superhero! She also recently dressed up as Edna, her favorite character from The Incredibles 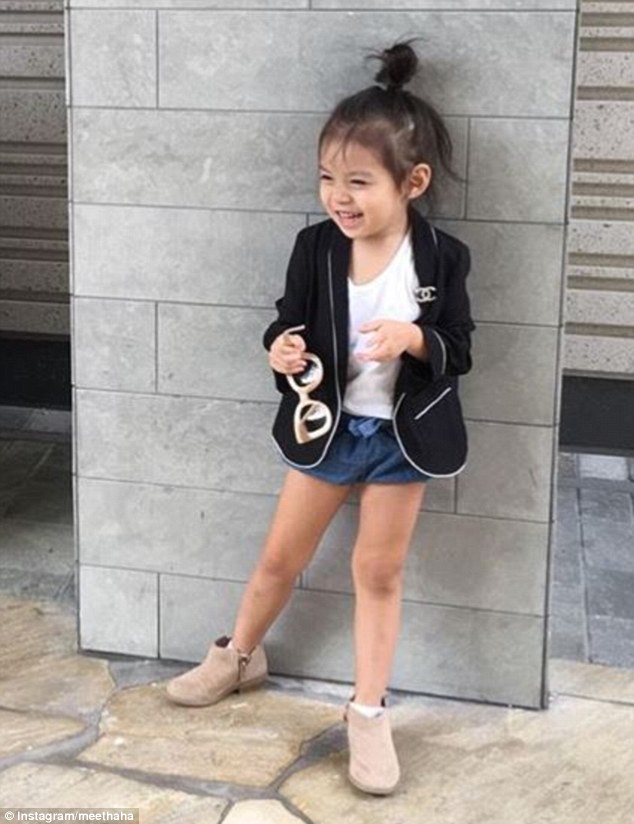 Experimenting: ‘Some days she dresses herself up in the most chic outfit, other days she just wants to be a princess,’ said Truong 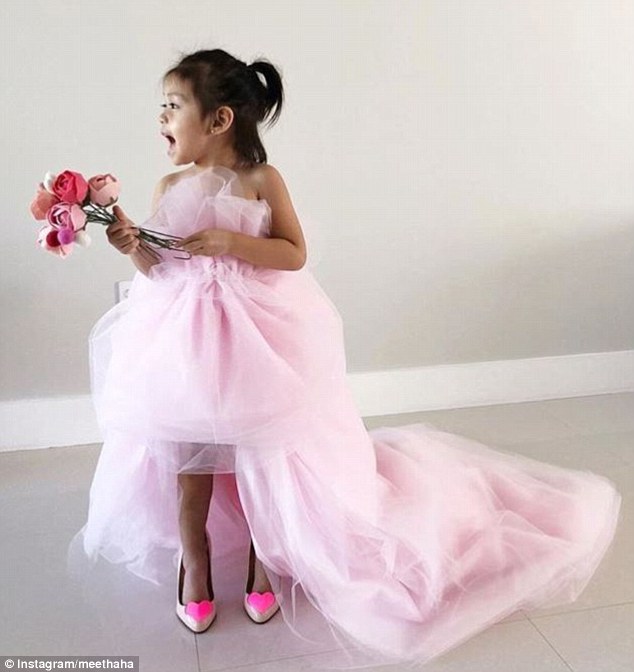 Chic minds: Truong is surprised by the fact that her daughter likes to watch runway footage, especially when there are pretty dresses 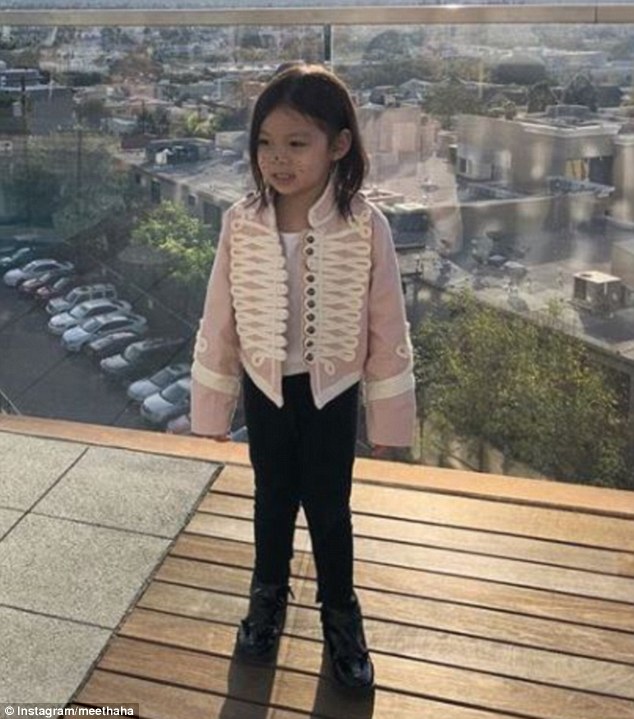 Do you like? Truong says she often gets Olivia’s imput before buying her clothes

‘When she gets home from school, she immediately looks for pajamas. She’s a little bit of everything. Most of the time, I ask her yes or no if I’m thinking about buying something.

‘If we’re out shopping, she’ll go through the racks and say “I want this, this, this, and that! Ohhh, that’s cute.”

‘I’ve been giving her piles of fabric and she’ll make clothes for her dolls. She is her own person and I love it.’

Sometimes she is joined by her big brother in pictures, and other times her mom poses with her.

‘When we’re inadvertently coordinating, Liv will call us twinsies,’ said Truong. ‘She LOVES my shoes. And earrings.

‘If I’m wearing something she’s particularly interested in, she’ll ask if she can wear it when she grows up. Or she’ll actually pull it out of the closet and try it.’

Truong has shared some cute photos of Olivia in her too-big shoes, or else holding all of her mom’s shopping bags. 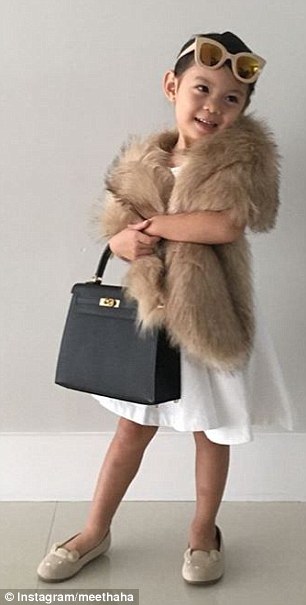 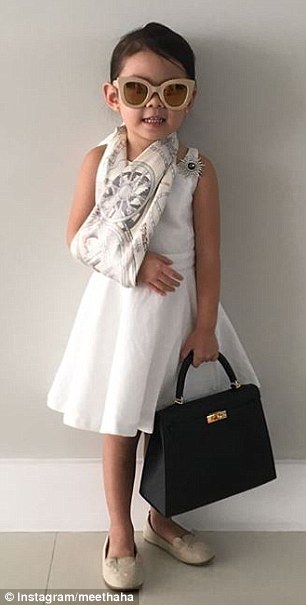 So fabulous! The little girl seriously rocks her accessories 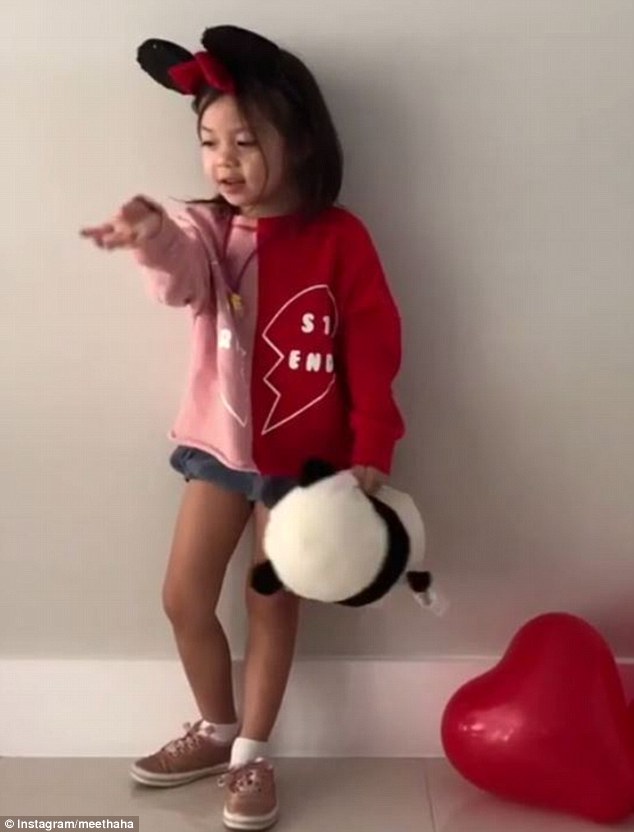 Minnie time! She still has kiddie tastes, too, and loves her Disney duds 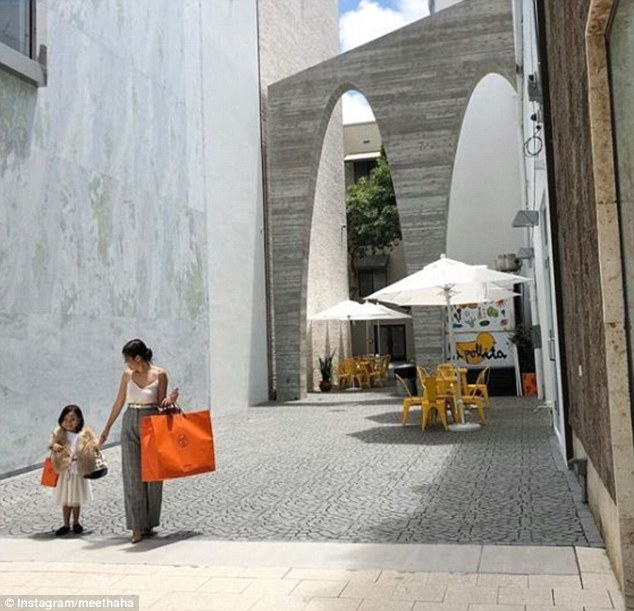 Want! When they go out shopping, Olivia will point out what she likes 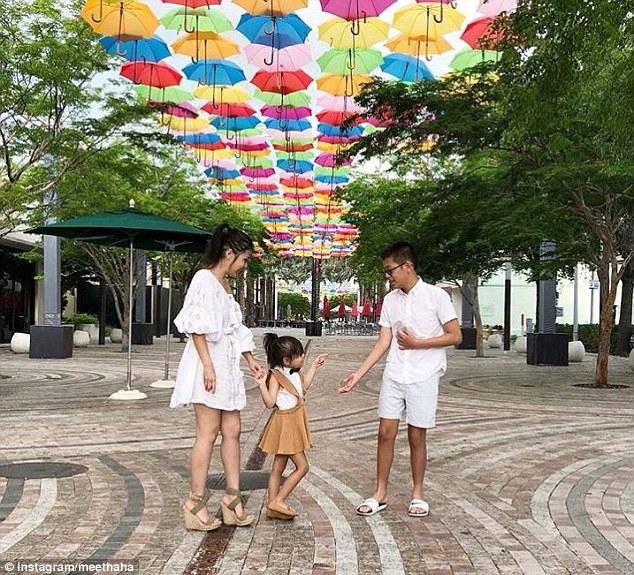 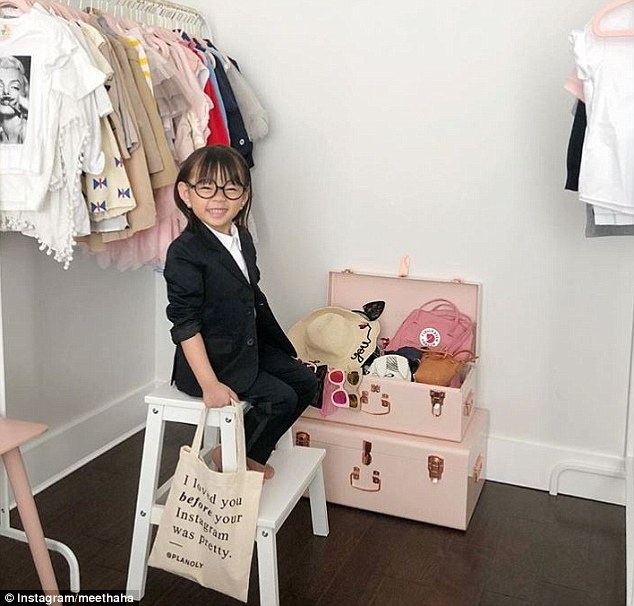 Coveted: For a little kid, she certainly has some enviable clothes and accessories